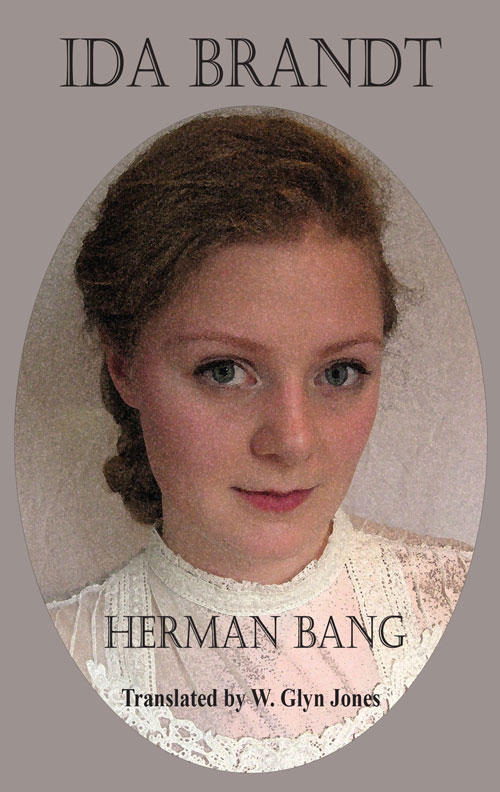 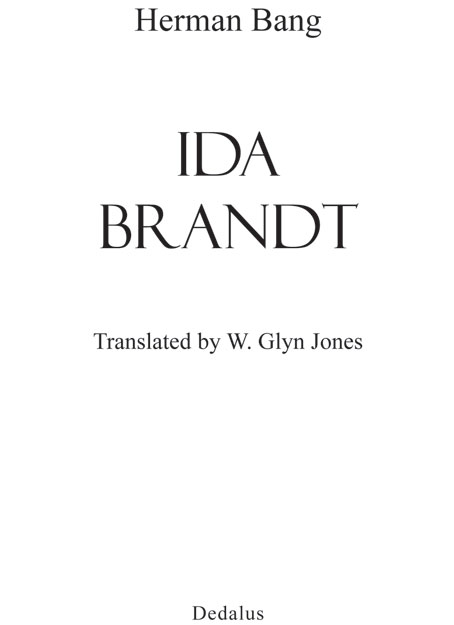 Dedalus would like to thank The Danish Arts Council’s Committee for Literature and Arts Council England, London for their assistance in producing this book.

W. Glyn Jones read Modern Languages at Pembroke College Cambridge, with Danish as his principal language, before doing his doctoral thesis at Cambridge. He taught at various universities in England and Scandinavia before becoming Professor of Scandinavian Studies at Newcastle and then at the University of East Anglia. He also spent two years as Professor of Scandinavian Literature in the Faeroese Academy. On his retirement from teaching he was created a Knight of the Royal Danish Order of the Dannebrog.

He has written widely on Danish, Faeroese and Finland-Swedish literature including studies of Johannes Jorgensen, Tove Jansson and William Heinesen.

He is the author of
Denmark: A Modern History
and co-author with his wife, Kirsten Gade, of
Colloquial Danish
and the
Blue Guide
to Denmark.

His translations from Danish include
Seneca
by Villy Sorensen and for Dedalus
The Black Cauldron
,
The Lost Musicians
,
Windswept Dawn
,
The Good Hope
and
Mother Pleiades
by William Heinesen and
My Fairy-Tale Life
by Hans Christian Andersen.

He is currently translating
The Tower at the Edge of the World
by William Heinesen.

“At times I feel almost as though someone else were adding the figures up.”

The porter had come for the three patients who had been working in the basement. He went over and shouted to the second of them, the man with the abdominal support, who was wandering up and down, up and down along the wall by the stove. He gave him a loud shout, straight in his face:

“Yes.” Patient number two stopped and looked at the porter. “Yes,” he said again, nodding and spinning around like a dog about to lie down. He always did this before embarking on even the smallest thing.

Then he got his dressing gown on like the others, and the three moved off. The porter’s keys could be heard rattling in the corridor as he locked the door – first at the top then lower down.

Nurse Brandt put the washed cups together in a corner of the small kitchen table and went into the ward to “listen”. But the two old folks in there were asleep, breathing deeply.

And all was quiet in Ward A.

Nurse Brandt climbed up on the chair in the anteroom – she had to do that in order to reach the window – and moved the flowers a little so as to make room and then sat down on the sill.

“Brandt’s quite mad,” said Nurse Brun in the women’s ward. “She flies up like a scared chicken.”

Ida Brandt leant her head back against the wall – she was always rather tired towards evening after her first time on day duty – and she looked out through the big window: the “Lakes” looked so calm, a single strip of red glowing in the sinking sun.

Ida Brandt took out a letter, but she sat there holding it in her hand for a long time as the red flush on the lake gradually slipped away and faded before starting to read:

Horsens, the 1st of October

You will receive this letter five days late. I know. But on the other hand, you don’t have five terrible children, two of whom last week broke the front leg off the writing desk. They just wanted to pretend it was a boat, my dear, while I was doing the cleaning. But the leg has been glued on again now, and this morning I managed to hang the last winter curtains, and so now you can have my birthday wishes: God bless you, my dear; you know that all of us here in the “Villa” wish you that.

So you are really twenty-eight now. Oh how time flies. When I pass your old window, I often feel it was only yesterday I used to see you sitting there on the mahogany chair and looking out like the good girl that you were. Everything about you was good, Ida, your eyes, your hair beautifully combed with its two pigtails, and everything. You used to look out at us giddy kids from Miss Jørgensen’s school as we came running down the street with our schoolbags, playing ‘tick’ in the gateways until there wasn’t a whole pleat in our skirts.

At last you would come out on to the outdoor steps and stand holding carefully on to the railing as though afraid of falling into the water until your mother called out ‘I-da’, and in you went with stiff pigtails and a rather old-maidish walk and your mother closed the door.

There was always something about your mother that put a damper on things.

I would pause to catch my breath in our doorway. I knew perfectly well that mother was watching: ‘Oh that’s where you are?’ (I had sidled in through the door). ‘Let me have a look at you’ – and I had to turn around.

‘Take your fingers out of your mouth, Olivia.’

‘
Now I’ve told you before, this is the last time you’ re going to have fur edging on your coat…’ I pulled a face; there was always a bit hanging loose here or there; I don’t know how it was, but Regine and I simply became untidy
.

I ran with my schoolbag straight into the doorframe.

And I was out in the street.

‘But…’ came the voice from the window again, ‘you’ d better get Karen to put a brush on your hair…It’s a disgrace to you.’

Hair was the worst thing. It always ended with Karen having to stand with the brushes in front of Mamma, brushing and brushing:

‘No,’ Mamma would sigh. ‘It’s impossible to make that hair look tidy. Just you look at Ida Brandt, she can keep hers in order.’

I stood there as stiff as a poker, and Karen brushed away: you were always the paragon of virtue.

And do you remember when Mamma visited your mother together with me – I don’t think they had really known each other very well before that – and they were talking in the living room and we were sitting in your two little chairs in the bedroom between your mother’s bed and the window and I suddenly took hold of both your pigtails and banged your head against the edge of the bed?

You didn’t resist and you didn’t make a fuss, but you simply started to cry – quite gently…Do you know what, my dear: I think I was fond of you from that moment because you had cried so quietly…

Ida Brandt lowered her friend’s letter to her lap. She gazed out at the Lakes without seeing them. It was as though she could see everything at home, the house, the living room where the furniture had never been rearranged, and the bedroom with the two small chairs on which she was to fold her clothes, garment by garment, before going to bed; and her mother, calm and broad with the heavy curls in her hair and the gold chain around her neck.

Then she read on:

I so well remember the Wednesdays, when I used to come across to your house at five o’ clock to fetch you out. Once I was indoors, your mother would call from her window seat into the bedroom, where you were doing your homework:

‘I-da.’ You always stuck you fingers in your ears when you were reading, you were so keen: ‘It’s Olivia Frank.’

Continuing to knit with her big needles, your mother would nod and say, ‘Sit down, dear.’

And I would sit down by the door – in your home one always sat in the middle of the chair – until you had all your clothes on – your waistcoat and your little scarf and then your cape and big scarf – and then we curtsied to your mother.

‘Have you a handkerchief, Ida?’ she would ask – I always felt for my own handkerchief – ‘Take care of yourselves…’

And we went past the window, side by side.

In the evening, the cloth was taken off the table – I can see your mother moving the lamp from one table to the other – a job she always did herself and then we played patience while your mother had a game of whist with the maiden ladies. At half past eight, when I was to go home and your Sofie came in with the redcurrant wine, we were given an apple each while my outdoor clothes were brought into the warm room…

Mamma used to say, ‘Olivia is better behaved for a whole day when she has been at Ida Brandt’s.’

But on Sundays you came to our house from first thing in the morning. Do you remember how Sofie used to bring you and say that ‘madam sends her compliments’ as she took your outdoor clothes off one by one as though she was undoing a bundle? No one scared Mamma like your Sofie.

‘I don’t know,’ she used to say, ‘but her eyes are everywhere as though she is looking for the tiniest speck of dust on the furniture.’

Mamma had a tendency to become flustered in the presence of other people’s maids.

In her most polite voice, Mamma would say, ‘Could I offer you a cup of coffee, Sofie?’

And Sofie would drink it, sitting primly on the chair near the black bookcase, without saying a word.

Do you remember the day we were out playing and you tore your blue muslin dress on a nail?

You simply sat there, quite quietly, all the time smoothing the tear over your knee without saying a word, and I stood just watching and then I started to help you, with both my thumbs, as though we could glue the tear until I whispered, ‘We must tell Mamma’.

And we ran up to Mamma, and when we were just inside the doorway I said:

When I said ‘torn’ I started to cry, but you stood there as quiet as ever.

Mamma took hold of your dress by the seam and held it out from you like a banner:

‘Yes, what did I tell you?’ She let go of the skirt. ‘What must Mrs Brandt think about this crazy family?’

You stood there, trembling but not crying, and Mamma loosened the hair behind her ears with her crochet hook:

‘We must send for Miss Finsen,’ she said, just as dismayed as we were. ‘Take your dress off…’

Karen ran to fetch Miss Finsen and you put on one of Mamma’s nightdresses while you waited, and Mamma went on about ‘this house’ and my dress, which I could tear without there being a problem…

‘There’s Mrs Brandt,’ I shouted from the window.

Mamma let go of the dress:

‘She’s going to church,’ she said, as though relieved. And we both watched your mother’s straight back as she crossed the market place.

Mamma put her hands down on her lap.

‘In that case they won’t be going home before half past twelve,’ she said with conviction.

When Miss Finsen came, she declared that she could take half a width out and then alter the pleats in the back.

‘It won’t be seen,’ she said as she measured and examined the blue material. Miss Finsen, poor woman, had a pair of eyes as though she was always wondering how best to cut a length of material of difficult material.

It was not to be seen.

‘Turn round, dear,’ Mamma said to you once you had the dress on again. ‘Once more…No, it can’t be seen.’

‘Thank goodness for that, Finsen.’ Mamma put her hands down on her lap.

‘Let’s have a cream cake now.’

Cream cake was Mamma’s regular treat for seamstresses. A tiny bit of pastry was always left behind on Finsen’s lower lip, in the crack she had acquired by biting threads.