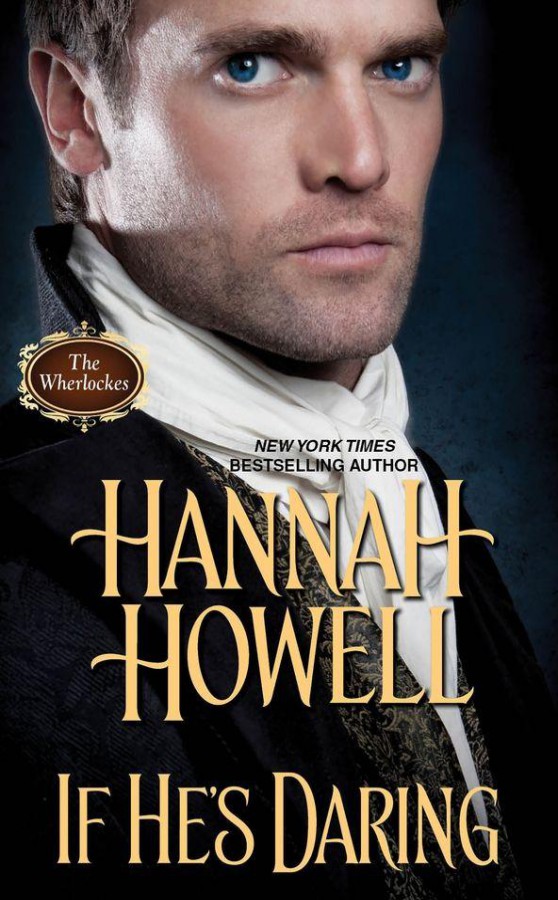 Stealing a stranger's carriage is the second most reckless thing Lady Catrin Gryffin de Warrene has ever done. The first is succumbing to her powerful attraction to the carriage's owner. Catrin has heard the rumors about Sir Orion Wherlocke's family and their otherworldly gifts. He's the one person who can keep her son and his inheritance safe from her late husband's ruthless brother. As for how to protect herself...
it may be too late for that.

Orion is facing the worst danger a man of his ilk can find: a woman he can't walk away from. Catrin is an intoxicating blend of innocence and sensuality, and for the first time, seduction is far more than a game. But her beauty and fortune have made her a target -
one that will dare him to risk everything he's known -
in pursuit of everything he's ever longed for...

IF HE’S DARING
Suddenly she was aware that she was seated very close to Orion and he had his arm around her. It was nice, the warmth of his body keeping away the encroaching chill of the night. It was also highly improper but then she was already doing a lot that was improper such as riding around the countryside with an unmarried man who was not related to her. She looked up at him to find him looking down at her.
His face was so close and so very handsome. She could see concern for her in his beautiful blue eyes. His mouth was almost as pretty, the bottom lip a little fuller than the top. Catryn could not recall the last time she had been kissed by a man and she suddenly craved a kiss.
Orion knew it was a mistake as he lowered his mouth to hers but the way she had looked at him had been a temptation he could not resist. There had been the glint of want and curiosity in her sea-green eyes and every part of him strongly encouraged him to answer both. It took but one brush of his mouth over her full, soft lips to tell him that he could be risking a lot just to steal a little taste but he ignored that warning . . .
Books by Hannah Howell
THE MURRAYS
Highland Destiny
Highland Honor
Highland Promise
Highland Vow
Highland Knight
Highland Bride
Highland Angel
Highland Groom
Highland Warrior
Highland Conqueror
Highland Champion
Highland Lover
Highland Barbarian
Highland Savage
Highland Wolf
Highland Sinner
Highland Protector
Highland Avenger
Highland Master
THE WHERLOCKES
If He’s Wicked
If He’s Sinful
If He’s Wild
If He’s Dangerous
If He’s Tempted
If He’s Daring
VAMPIRE ROMANCE
Highland Vampire
The Eternal Highlander
My Immortal Highlander
Highland Thirst
Nature of the Beast
Yours for Eternity
Highland Hunger
Born to Bite
STAND-ALONE NOVELS
Only for You
My Valiant Knight
Unconquered
Wild Roses
A Taste of Fire
A Stockingful of Joy
Highland Hearts
Reckless
Conqueror’s Kiss
Beauty and the Beast
Highland Wedding
Silver Flame
Highland Fire
Highland Captive
My Lady Captor
Wild Conquest
Kentucky Bride
Compromised Hearts
Stolen Ecstasy
Highland Hero
His Bonnie Bride
Published by Kensington Publishing Corporation
I
F
H
E’S
D
ARING
H
ANNA
H H
OWELL

Eye of the Moon by Dianne Hofmeyr
Daddy's Immortal Virgin by Christa Wick
Bride's Flight from Virginia City, Montana by Murray Pura
Safe With Me by Amy Hatvany
The Madness of Cthulhu Anthology (Volume One): 1 by
Bachelor Unleashed by Brenda Jackson
The Misfortunes of Others by Gloria Dank
Plain Fear: Forgiven: A Novel by Leanna Ellis
Medusa by Timothy C. Phillips
The Bell Jar by Sylvia Plath
Our partner