Read If I Can't Have You Online

If I Can't Have You 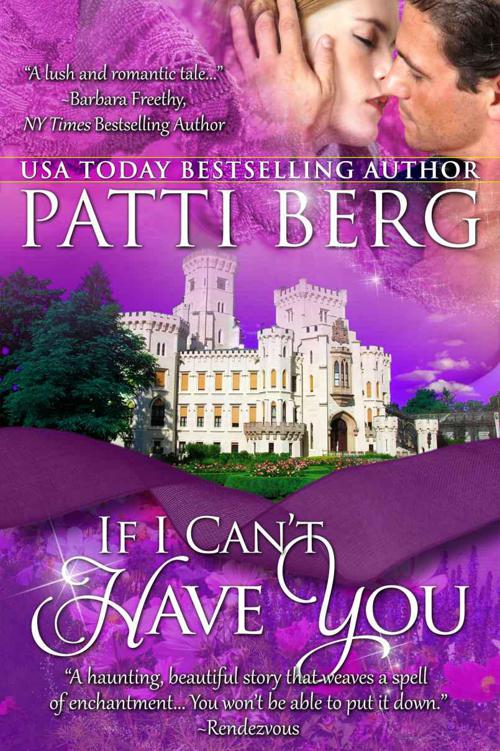 If I Can’t Have You

No part of this book may be reproduced or transmitted in any form or by any electronic or mechanical means including information storage and retrieval systems without permission in writing from the author, except by a reviewer who may quote brief passages in a review. This book may not be resold or uploaded for distribution to others.

This is a work of fiction.
Names, characters, places, and incidents either are the product of the author’s imagination or are used fictitiously. Any resemblance to actual events, locales, organizations, or persons, living or dead, is entirely coincidental and beyond the intent of either the author or the publisher.

First published in the United States by
Avon Books 1998

Other books by Patti Berg

My deepest gratitude to the movie legends of the ’30s whose films have given me so much enjoyment over the years, and who provided me with the inspiration for this book. Special thanks to my two favorite stars: Cary Grant—for the smiles, the laughter, and the romance. Errol Flynn—for an infectious laugh, for being a dashing and daring hero, and for having wicked ways. May your memory last forever.

What a grand night for dying.

Trevor Montgomery gazed at the fireworks exploding over the swaying palms and the magnificent columns of
Sparta
, lighting the midnight sky with a profusion of sparkling colors. Off in the distance he could hear laughter and loud voices ringing out as partygoers gathered on one of the crowded terraces of Harrison Stafford’s palatial seaside estate, eating his food, drinking his liquor, and celebrating Independence Day in t
he grand fashion people expected from the self-made tycoon.

Trevor had laughed with
Harrison
earlier in the evening. He’d let his closest friend beat him at a game of chess, and he’d strolled among the other guests with a picture-perfect smile on his face as if he hadn’t a care in the world. Inside though, deep down where no one could see, he felt scared, and alone; happiness, he realized, was part of his past. As if in a movie, Trevor had put his keen skills to work this night and deceived everyone. He was an actor, after all. A great actor.

The only one he hadn’t fooled tonight was himself.

When the mixture of too many sounds grew loud and oppressive, he’d walked away from the party, wandering through gardens fragrant with roses and honeysuckle and down a meandering path that led to one of the lower terraces and a pool where he’d swum just a few weeks before.

Now, he stood on the marble steps of the Grecian temple Harrison had spared no expense in building, one hand tucked in the pocket of his crisply pleated trousers, the other pressed against a marble column for support. Instead of looking up at the rain of firelight, he cast his eyes downward and studied the reflection of a million sparkles on the calm surface of the pool.

Slowly, he smiled. He couldn’t have picked a more glorious night or a more perfect place for his final performance.

Casually, he unbuttoned his white dinner jacket and knelt to retrieve the nearly empty bottle of Chivas Regal that rested by his shoes. One glass of the potent liquor hadn’t been enough to satisfy his thirst, so he’d taken the bottle from the bar, surprising no one by his actions. It wasn’t the first time Trevor had been seen with a bottle of booze in his grasp, but it would definitely be the last. He tilted the bottle and swigged the few remaining drops of whiskey, no longer feeling the burn in his throat, feeling only the thrum of noise reverberating in his head. He’d consumed a fifth of liquor, maybe more, in the past twelve hours. It was amazing he felt anything at all when his sole purpose had been to completely numb his body and paralyze his mind.

It was no use though. He couldn’t rid himself of the horror. Not the blood, not the knife, not the smell of death.

The bottle slipped from his fingers, but he couldn’t
hear the shatter of glass on cold hard marble, not when it competed with the crash, crackle, and bang of the fireworks exploding in the sky.

As he had done a thousand times before, he ran his fingers through thick ebony hair, combing back the lock that insisted on falling over his forehead when caught in the cool night breeze. He’d perfected that gesture in front of the camera. Always the tall, good-looking, stalwart hero. Tonight, though, he played the coward.

“Not one of your better endings, Trev,” he whispered to himself, then laughed one last time. “There won’t be any applause. Not tonight.”

Taking a deep breath, he sucked in the scents of star jasmine, closely clipped grass, the obtrusive smoke and gunpowder from the Fourth of July festivities, and, from a distance, the salt air of the
Pacific Ocean
that he loved and would never see again.

The time had finally come. He closed his eyes, asking forgiveness from the God he’d nearly forgotten, and casually walked down the steps and into the pool. He’d heard of people drowning while in a drunken stupor. Those were accidents, of course, and, with any luck, his friends would believe his death had been accidental, too. Suicide wasn’t his style. It was something he’d never even contemplated—until today.

He took one last deep breath as water seeped through the silk of his tuxedo, into his shoes. He willed himself to remain calm, to relax. He let his arms go limp at his sides. His legs and body floated easily to the surface, and he pillowed his face comfortably in the water. His thoughts drifted from his fear of not being able to breathe, to his first screen test, to planting his hands in wet cement at Grauman’s, to the friends he would miss.

And he thought about dying, and not having to remember the nightmare.

Water lapped against his ears, a hollow, drumming sound. He heard the faint reverberation of a woman’s scream.

A dark void filled him then, he felt tired, he wanted to sleep, and

Adriana Howard stood in the shadow of a twisted
Monterey
pine and listened to the clicking of the camera as she watched the photographer dart about shooting left angles, right angles, highs, and lows. Through dark glasses she observed the model being photographed. He stood perfectly still, one hand in his pants pocket, the other resting on the edge of the car as the
Pacific Ocean
breeze wafted through his hair, blowing a dark black lock over his forehead.

The photographer said he’d found the perfect Trevor Montgomery—but he was wrong. This man didn’t have the same broad shoulders, the same slim waist and hips. The cleft in his chin wasn’t as pronounced. His eyes didn’t sparkle or brood with as much intensity. And he didn’t look nearly as good in black tie and tails.

Wyndham, John by The Day Of The Triffids (v2) [htm]
Wonders of the Invisible World by Christopher Barzak
Only His by Susan Mallery
In the Sanctuary of Outcasts by Neil White
Eagle's Refuge by Regina Carlysle
The Scent of Rain by Kristin Billerbeck
West of Washoe by Tim Champlin
OffshoreSeductions by Patti Shenberger
Surviving the Day by Matt Hart
The Shadow of Mudflap (A Foxtrot Team Novel #1) by Snow, Christi, Smith, M.F.
Our partner