Read If You Come Softly Online

If You Come Softly 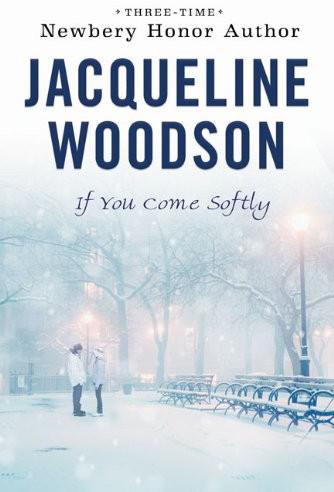 Table of Contents
Title Page
Dedication
Copyright Page
Part One
Chapter 1
Chapter 2
Chapter 3
Chapter 4
Chapter 5
Chapter 6
Part Two
Chapter 7
Chapter 8
Chapter 9
Chapter 10
Chapter 11
Chapter 12
Chapter 13
Chapter 14
Chapter 15
Chapter 16
Chapter 17
Chapter 18
Chapter 19
Chapter 20
Chapter 21
Chapter 22
Chapter 23
Chapter 24
Chapter 25
Chapter 26
At first sight
I couldn’t stop looking at him, at his smile and his hair. I had never seen locks up close. His were thick and black and spiraling down over his shoulders. I wanted to touch them, to touch his face. I wanted to hear him say his name again. For a moment we stared at each other, neither of us saying anything. There was something familiar about him, something I had seen before. I blinked, embarrassed suddenly, and turned away from him.
Then Jeremiah rose and I rose.
“Well...good-bye. I guess...I guess I’ll see you around,” he said softly, looking at me a moment longer before turning away and heading down the hall, his locks bouncing gently against his shoulders.
“Jeremiah,” I whispered to myself as I walked away from him. I could feel his name, settling around me, as though I was walking in a mist of it, of him, of Jeremiah.
OTHER BOOKS BY JACQUELINE WOODSON
Behind You
The Dear One
The House You Pass on the Way
Hush
I Hadn’t Meant to Tell You This
Lena
Locomotion
Miracle’s Boys
The tide and the poem “If You Come Softly” by Audre Lorde are from
The Collected Poems of Audre Lorde
published by W. W. Norton and
reprinted by permission of the Charlotte Sheedy Literary Agency.
SPEAK
Published by the Penguin Group
Penguin Group (USA) Inc.,
345 Hudson Street, New York, New York 10014, U.S.A.
Penguin Group (Canada), 90 Eglinton Avenue East, Suite 700,
Toronto, Ontario, Canada M4P 2Y3
(a division of Pearson Penguin Canada Inc.)
Registered Offices: Penguin Books Ltd, 80 Strand, London WC2R 0RL, England
First published in the United States of America by G. P. Putnam’s Sons,
a division of Penguin Putnam Books for Young Readers, 1998
Published by Speak, an imprint of Penguin Group (USA) Inc., 2003
Reissued by Speak, an imprint of Penguin Group (USA) Inc., 2006
Copyright © Jacqueline Woodson, 1998
All rights reserved
THE LIBRARY OF CONGRESS HAS CATALOGED THE G. P. PUTNAM’S SONS EDITION AS
FOLLOWS:
Woodson, Jacqueline.
If you come softly / Jacqueline Woodson.
p. cm.
Summary: After meeting at their private school in New York,
fifteen-year-old Jeremiah, who is black and whose parents are separated,
and Ellie, who is white and whose mother has twice abandoned her,
fall in love and then try to cope with people’s reactions.
eISBN : 978-1-101-07697-2

The Salem Witch Society by K. N. Shields
She Poured Out Her Heart by Jean Thompson
Camp Follower: A Mystery of the American Revolution by Adair, Suzanne
SAT Prep Black Book: The Most Effective SAT Strategies Ever Published by Barrett, Mike
Second Chance Hero by Winnie Griggs
Grow a Sustainable Diet: Planning and Growing to Feed Ourselves and the Earth by Cindy Conner
Perchance to Dream by Robert B. Parker
Sweet Madness: A Veiled Seduction Novel by Snow, Heather
Archer's Sin by Amy Raby
Seaweed Under Water by Stanley Evans
Our partner