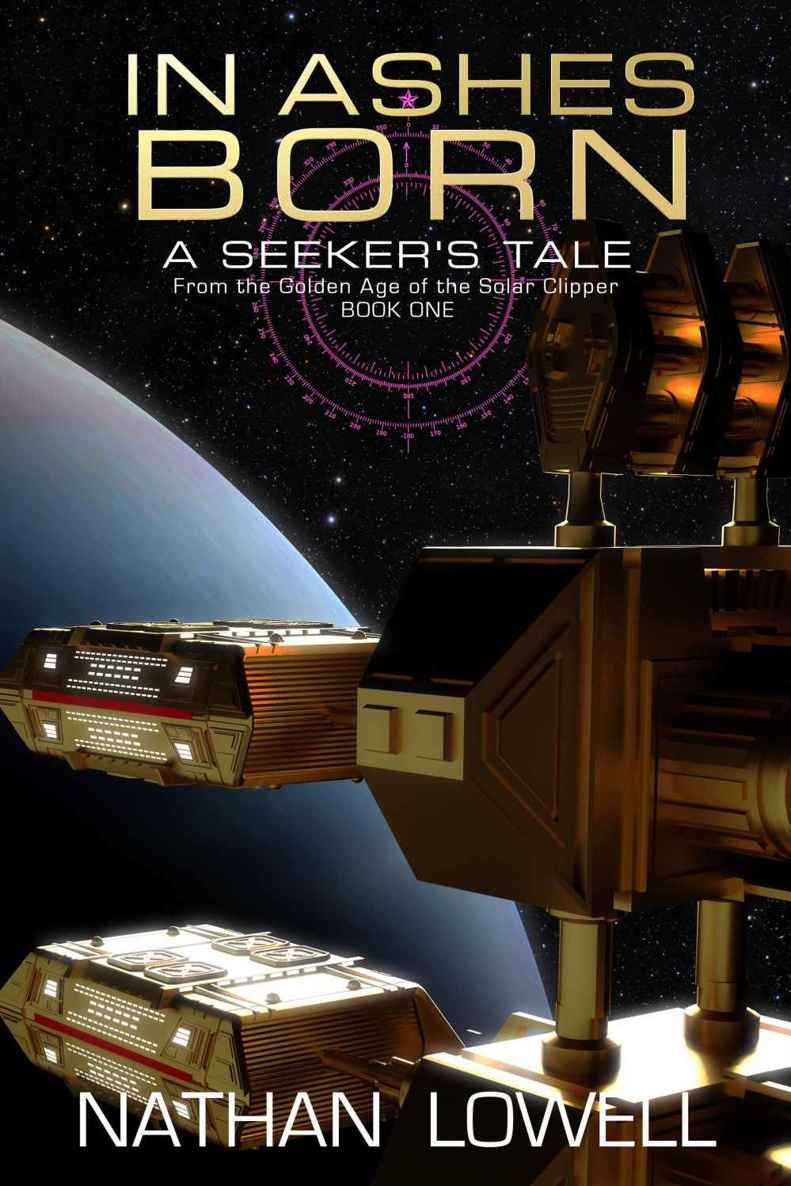 Visit us on the web at:
www.solarclipper.com

To my grandfather, Ralph M. Lowell.
He taught me to fish and the value of work.
He was a gentle soul who
always smelled of fresh cut wood and tobacco.
May he rest in peace.

A lot had changed on the campus since I’d left it in ’58. Sixteen stanyers in the life of a public institution would do that. From the observation deck, I could pick out the hulking edifice that was Hutchins Gym. The buildings still hugged the ground, most a single story. Where the old admin building used to be, a new glass and steel office tower stood shoulders above the tree line. I snorted as I realized that it couldn’t be more than five floors, but it towered above the rest.

I turned to find a cadet waiting at attention. “Yes?”

“Commandant’s compliments, sar. I’m to show you to the Visiting Officers Quarters and see that you’re settled comfortably, sar.”

He snapped to a perfectly rigid parade rest.

I sighed and read his name badge. “Mr. Udan? Is that Ou-dan or You-dan?”

“Oo-don,” he said with the emphasis on the second syllable.

His posture relaxed fractionally, but he didn’t look anything like comfortable. The two stripes on his sleeve marked him as a second-year student.

“Oh, yes, sar. The cadet has not qualified for a summer cruise, sar.”

“And damned be him who first cries ‘Hold! Enough!’ sar,” he answered.

His answer forced a laugh out of me.

He came back to attention and held a flat palm toward the ladder off the observation deck. “Your quarters are this way, sar.”

With a final scan of the campus from the terminal overlook, I nodded to him and led the way down the ladder, both grav-trunks trundling along behind. Out on the tarmac, I heard shuttle engines warming up with their characteristic whistling whine, a sound I hadn’t heard since I left. It sounded like home.

The terminal lay nearly deserted. The outgoing traffic had cleared out as had the half dozen mechanics I’d shared the ride down with. They’d left me to my own devices in the back of the shuttle while they carefully kept eyes forward and voices down. After letting me debark, they’d arrowed straight for the terminal exit.

“Would the captain prefer to walk or ride, sar?”

“Walk, I think, Mr. Udan, and if it wouldn’t strain your training protocol too much, the captain would prefer to be called by his name.”

Red crept up the back of the boy’s neck. “Of course, sar.”

“Walk with me, Mr. Udan. You can regale me with tales of student life.” I set off at a stroll toward the exits and smiled to myself when Mr. Udan fell into step.

“I’d have thought he’d have retired by now.”

“He, sar?” Udan gave me a sharp side-eyed glance.

“So I’m told, sar.” Udan stepped forward to trigger the automatic doors that opened onto the plascrete plaza fronting the terminal building.

“How long has she been here?”

“I believe this is her fifth term as commandant, sar. She was here when I got here, but some of last term’s graduates knew her father.”

We strolled down the tree-shaded path toward a cluster of smallish bungalows sheltered in the stunted trees.

“She was my first captain,” I said. “She put me in for the academy herself.”

I saw Udan giving me a skeptical look out of the corner of my eye. I grinned at him. “Don’t look so surprised. She recommended a lot of students. I was number thirty-four. I have no idea how many she ended up with.”

He stopped in front of one of the bungalows. “This is your cottage, sar.”

I looked at the comfy little building, all brick and wood. White roses bloomed on a trellis highlighted by the late afternoon sun. “I used to trim these roses when I was a cadet, Mr. Udan.”

He cocked his head and looked at me, surprise painted on his face with a broad brush.

“It’s true. I had problems with the physical training so I was assigned a rather unorthodox teacher.”

“And he had you pruning roses, sar?”

“
She
had me pruning roses, trimming trees, raking leaves, and planting flowers. Among other things.”

His brow furrowed as if he couldn’t make sense of what I’d told him.

“What self-defense discipline have you worked with, Mr. Udan?”

“When I was here the PT instructor said I had the killer instincts of a lawn chair. He brought me out here to meet my new teacher.” I smiled at him. “I’m hoping she’s still here. I could use some refresher work.”

“How long ago were you here, sar?”

He shook his head. “I don’t know any instructors who’ve been here that long, sar.”

“Is the old dojo still there? The one with the big windows behind Hutchins?”

He blinked. “Well, there’s a building over there, yeah. Big windows and almost overgrown with ivy and vines, sar.”

I smiled. “And have you ever noticed a gardener working the grounds? Older woman? About this tall?” I held up a hand to show what I meant. “White hair. Wears a floppy canvas hat? Her name is Margaret Newmar.”

“I don’t know that name, sar, but there’s a little old lady who tends a lot of the gardens. I see her around sometimes.”

“She was a martial arts instructor, sar?”

“I still am, Mr. Udan.” The voice came clear and piping on the late afternoon air.

We turned to find
Sifu
Newmar strolling toward us along the path, her ever-present gardening gloves in one hand and a pair of trimmers in the other.

I locked my hands together and bowed, student to master.

She smiled and handed her gloves and trimmers to Udan before returning the bow, teacher to student. “I’m pleased to see you, Captain.”

Her left eyebrow twitched ever so slightly and her lips curved up on the right. “You always were polite.” She shook her head. “But you still can’t lie worth a damn.”

I had to laugh. “I’ve been practicing.”

“You’ll never be a good liar. You have other admirable qualities.”

She held out her hands to him for her gear. “Mr. Udan, you have duties, I believe.”

He stopped in mid-salute on realizing she wasn’t in uniform and just nodded. “Yes, sar. Ma’am. That is. Yes.” To me he said, “If there’s anything you need, Captain? There’s a card on the desk inside.” He came to attention and saluted me, holding it.

I returned the salute. “My compliments to the commandant, Mr. Udan. Thank you for your assistance.”

He nodded once and strode off toward the admin building.

“I know
of
him. He’s one of Alys’s problem children.”

I looked after the retreating cadet. “That why he’s not on summer cruise?”

Her lips twitched but she just winked and shook her head. She looked to the rose bushes beside the door. “What do you think of those iceberg climbers?”

She lifted one shoulder and let it fall. “We may be in the ivory tower, but I still follow the news. After what you’ve been through? I’m half surprised you haven’t shown up sooner.”

“And Chief Stevens told you I’d be coming?”

She pursed her lips and gave me a half smile. “Maggie Stevens is a sweetheart. She’ll be here later in the summer, I think.”

She looked at me. “No. She got what she went for. She’ll be back to work on the new edition of the book by the end of July. Wouldn’t surprise me if Alys convinces her to stay on and teach in the fall.”

I gave a little laugh. “And what about me? What do you see me doing?”

She handed me the trimmers. “For starters? Those climbers need some attention. Why don’t you give them some.”

I looked down at my dress uniform. “I should probably change.”

“Practical thought,” she said. “I’ll be on the floor at 0600, if you’d care to join me. Maggie says you need some help with the Four Corners.”

“I may not have been as diligent as I might have been over the stanyers.”

She sniffed. “It’ll come back.” She ambled back the way she’d come. “Bring the clippers back tomorrow,” she said over her shoulder. “Might be more work for you.”

The Rascal by Lisa Plumley
Right Hand of Evil by John Saul
North Dakota Weddings by Elizabeth Goddard
No Other Gods by Koetsier, John
The Three Fates of Ryan Love by Erin Quinn
Dafne desvanecida by José Carlos Somoza
The Yellowstone by Win Blevins
Gray Lady Down by William McGowan
Lulu Bell and the Arabian Nights by Belinda Murrell
Since She Went Away by David Bell
Our partner