Read In Front of God and Everybody Online

In Front of God and Everybody 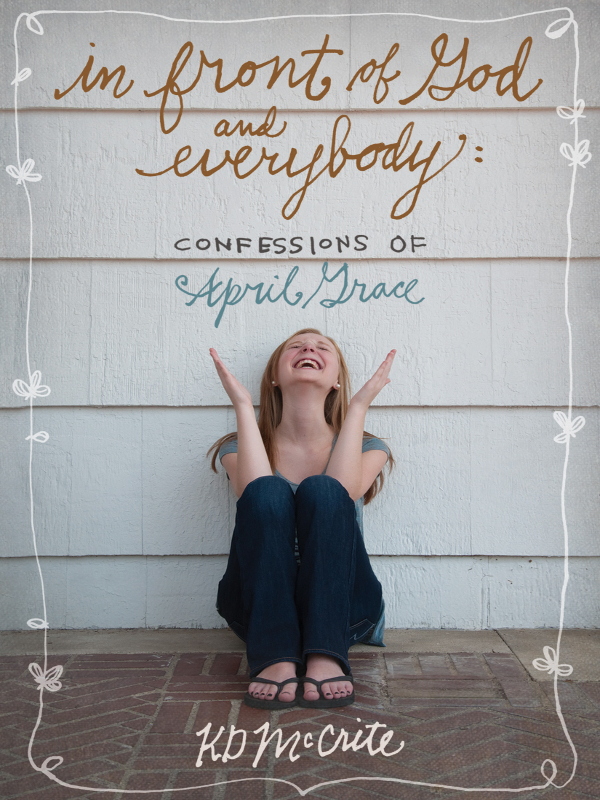 In Front of God
and Everybody:

In Front of God
and Everybody:

Tommy Nelson
Â®
titles may be purchased in bulk for educational, business, fund-raising, or sales promotional use. For information, please e-mail [email protected]

An application for Cataloging-in-Publication Data has been filed

Dedicated to my husband, Brett,
who loves April Grace as much as I do!

ONE: Something New This Way Comes

TWO: Ian and Isabel Look for Their Roots

THREE: Where's a Good Case of Tonsillitis When You need One?

FOUR: Calling on Ian and Isabel

NINE: Home-cookin' and the St. Jameses

TWELVE: An Invitation to Die For

FOURTEEN: Ian and Isabel Move In

FIFTEEN: Going to Town When Crawling in a Hole Is a Better Idea

SEVENTEEN: Queenie, Queenie, You're a Weenie

TWENTY-TWO: A Good Imagination Is a Terrible Thing to Waste

TWENTY-FOUR: Getting Under Isabel's Skin

ONE
Something New
This Way Comes

I was sitting on our big front porch, reading a book and minding my own business, when a big black car gleaming like a new mirror pulled into the shady, narrow lane that leads to our farmhouse. I flipped my red braid over my shoulder and squinted hard. You just don't see shiny, new vehicles on Rough Creek Road, or even in Cedar Ridgeâthe town we live near here in Arkansas, right in the middle of the Ozarks. Folks here don't have money for fancy-schmancy automobiles, especially brand-new 1986 models, which I was sure that one was.

The minute I laid eyes on that car, something unpleasant shivered across my skin, the way the air feels before a bad storm. Worst of all, it dragged me back to a time three years ago when I was eight years old and saw something I hoped never to see again.

Here's what happened. I'd been invited to spend the weekend with Crystal Tomlinson, a new girl at school who'd moved to Arkansas from someplace up North. We became friends right off.

Her family lived in a brand-new, huge house with a swimming pool and a maid, and I had never seen such a thing in my life.

One weekend, a bunch of Crystal's relatives had come to visit, but they were all adults, and she didn't have anyone to play with. That Friday night, while the grown-ups gathered downstairs, Crystal and I sat in her pink-and-white bedroom, playing with about two dozen My Little Ponies. I was thinking I'd dream of multicolored plastic horses for three weeks when suddenly, Crystal grabbed my hand and tugged me to my feet.

“Let's get something to eat!” she hollered. Crystal was a bit chubby around the edges, so getting something to eat right then wasn't totally unexpected. In fact, we'd had supper in the kitchen with the maid only an hour or so earlier. But this was an adventure, so I merrily went along with her.

We ran down the back stairs to the kitchen, where we ate tuna sandwiches and potato chips and slugged down Pepsi-Cola until we belched like truck drivers.

“Now let's get some cake,” Crystal squealed. I followed her into the dining room, where many people sat at a long table full of flowers and candles. They didn't see us as we went to the sideboard that held two kinds of cake.

While Crystal cut us big hunks of each cake, I looked at the adults. That was the first time I'd seen a table like that. It was covered with a bright white tablecloth, a bunch of sparkly goblets, and a zillion pieces of silverware next to each plate. And I had never in my life seen people all dressed up that way just to sit around and eat supper. The men wore dark suits, and the women's big hair was all stiff and poofy. Their jewelry glittered in the light from a big chandelier.

At our house, we wash our hands and comb our hair before we sit down to eat. If our clothes are dirty, we put on clean ones, but that's it. No high heels or ties or dangly earrings.

Everyone was laughing at something Crystal's dad had said, when her mother piped up in a nasally kind of voice.

“I'm not sure how much longer I can take living here,” she said. “You cannot believe these people. They think Fifth Avenue is nothing more than a candy bar. And the last time any of them went to the theater, it was to the Grand Movie House in Cedar Ridge. They've no idea what real theater is. . . .”

About that time, she spied Crystal and me. “Oh, here's one of them now. Come here, little redhead. Tell us your name,” she said.

Everyone stared at me, and I felt like I didn't have my clothes on, but I said, “April Grace Reilly.”

She looked at the others, and all of them laughed.

“Isn't that name too much?” Crystal's mom laughed.

They laughed some more.

I approached the table slowly, not liking the way those folks smiled.

“Say something,” said a woman on the other side of the table. She had a long face with deep grooves running down both sides of her mouth.

“How about a poem?” asked a man near the end of the table. He pronounced it “pome.” The man had a narrow, pointy head. In a voice that sounded like it came from his sinuses first, and which I suppose he thought sounded clever, he said, “Can
you-all
recite a poem?”

Every last one of them snickered.

“Go ahead,” said the pointy-headed man.

I figured if I said the poem without a single mistake and without talking too fast, they'd quit looking at me that way. I cleared my throat and stood straight and tall, the way Miss Carmichael had taught us.

“I think that I shall never see a poem lovely as a tree,” I began.

I was the only one in third grade who'd been able to remember that entire poem by Joyce Kilmer. I recited the whole thing right to the end, but the people at that table were all laughing their socks off.

“It's the way you talk, April Grace,” Crystal whispered right in my ear.

“See?” said Crystal's mother to her relatives. “That twang is just too much!”

She clapped her hands together, and I saw her long, red fingernails and a bunch of rings on her thin, white fingers.

“I actually overheard a woman the other day say she âlived a right far piece from the Walmarts.' Oh, and that's another thing here. Life seems to revolve around trips to Walmart. Or church.”

The pointy-headed man leaned away from the table and eyeballed my feet. “She's wearing shoes!” he said. “Her family must be rich.”

Well, that got a big, fat laugh.

A youngish woman across the table had a long face
and
a long, pointy head. She must have been the daughter of the other two. “Which one of your cousins will you marry when grow up?” she asked.

“Angela!” gasped Crystal's mother. “Shame on you.” But I noticed she laughed as hard as anyone else.

But that only made everyone laugh even harder.

“What's so funny about that?” I asked.

“One thing more,
Daisy Mae
,” said the pointy-headed man, smirking as he said the name. “Is your house a single- or a double-wide?”

They all hooted like that was the funniest joke of the night. I didn't live in a trailer, but why would it matter if I did? I couldn't understand why they laughed and said all those dumb things, but something inside me got tight and burned like fire.

“What's so funny?” I demanded, but no one told me.

I looked at Crystal. She was grinning like a big goof. She probably didn't understand it any more than I did, but all of a sudden I couldn't stand the sight of her, or that big house, or those fancy, sniggering people.

“I want to go home,” I said. Then I marched into the kitchen through a pair of swinging doors, found the telephone, and called for my daddy to come get me. I never went to Crystal's house again. A year or so later, her folks moved out of the Ozarks and back to whatever city up North they'd come from. Good riddance, I'd say.

So now, anytime I see some slick car or uppity, dressed-up people, my hackles rise in defense.

It was too bad about Crystal, because I had liked her well enough. In fact, maybe we still would have been friends. Maybe not. Sad thing is, my new best friend, Melissa, had gone away to summer camp at the end of our fifth grade year, and I didn't have a blessed thing to do that summer. As it turned out, though, things happened that made the summer of 1986 the most memorable time of my whole entire life. And it all started with that gleaming black car pulling up in front of my house.