Read In The Barn Online 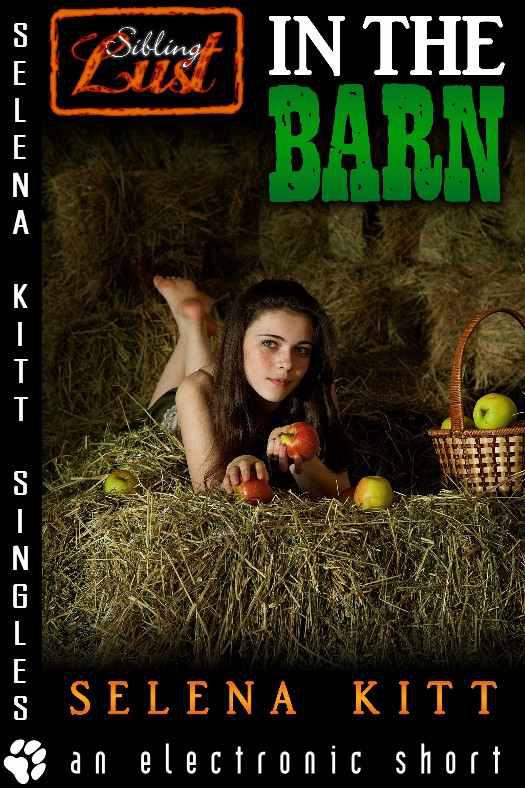 Sibling Lust:
In the Barn
©
November 2011
by Selena Kitt

All rights reserved under the International and Pan-American Copyright Conventions. No part of this book
may be reproduced or transmitted in any form or by any means, electronic or mechanical, including photocopying, recording, or by any information storage and retrieval system, without permission in writing from the publisher.

This book is for sale to ADULT AUDIENCES ONLY. It contains substantial sexually explicit scenes and graphic language which may be considered offensive by some readers. Please store your files where they cannot be access by minors.

My adopted brother masturbated in the barn, way up high in the loft, lying alone in the soft, clean hay we shoveled down for Da to feed the animals. I didn’t understand at first, what he was doing. I think he would have heard me, that first time I climbed up the ladder, ready to tell him that Ma needed a hand moving something in the kitchen, if he hadn’t been about to make a mess. I saw him, lying down, black hat tossed aside, head cocked at a funny angle, and at first I panicked, thinking he was hurt. But then I heard his fast, labored breathing, saw his hand moving between his legs, and knew he was holding onto his privates.

But what could he be doing to them?

I stood frozen on the ladder, eyes wide, as his hand moved faster and faster, like lightning, up and down. He gave out a soft moan, his hips bucked up, and I stared, shocked, as thick, white streams shot over his fist, up onto his bare belly, where he’d pulled up his shirt.

I knew it was a sin. I couldn’t be anything but. Instead of confronting him that first time, I snuck down the ladder as quiet as I could. I told Ma I didn’t feel well—and no, I didn’t find Eli in the barn, I said—and went to my room, which was really mine and
Ada
’s and Becca’s together.

I felt sick, rememberin
g what I saw, but I was curious
too. What could he have been doing with himself like that? The sounds he made were sort of like he was in pain…but why would he be hurting himself? And at the end, the shock of the liquid shooting from his privates…it wasn’t pee. I knew what that looked like. My little
st
brother, Isaac, had peed on me enough during diaper changes for me to know that.

I lay there a long time, feeling funny down low in my belly, playing the scene over and over in my head.
Eli was the eldest,
in his twenties now, me just behind him, turned eighteen last spring. He was Ma’s
sister’
s boy really, but when my aunt
died of sepsis soon after he was born, Eli’s father
had left our order, too full of grief to stay, and the baby had stayed too. My parents had raised him as their own and we had known each other as brother and sister from the beginning. I knew I shouldn’t have watched him, that I shouldn’t be feeling the way I was, but I couldn’t seem to help myself.

That’s when I decided to watch
Eli, to see if he did it again.
It was the next afternoon he disappeared from the side of the house where Da had him stack
ing wood. I was hanging laundry
and saw him head to the barn, so I followed.

This time, I saw it all, from beginning to end. I peeked over the top of the ladder to watch, even untying and taking off my white cap—a sin in and of itself—hoping the darkness of the barn would hide me, and let my brown hair blend into my surroundings. If he looked over, he would only see that—the top of my head and my wide eyes. I watched him lie back in the hay, unfasten his pants,
and
start touching his privates.

It was soft at first—a small snake in a nest of hair—but the more he touched it, the bigger it got. I stared, aghast, when it stood straight up, more than double its original size. Eli licked his palm, calloused from hard work, and wrapped his fist around the length, moving his hand up and down, just like the day before.

His breath came faster and faster—and so did mine. That funny feeling was back in my belly, low down, cradled in my pelvis. Something ached there, throbbed, like a tooth does, only it wasn’t a hurtin’ sort of agony, but a delicious kind. I wanted more of it. And the more I watched, the more the feeling swelled until I felt like I was going to burst.

It wasn’t long before he was moaning again, whispering, “Oh, oh, oh!” and then shoving his privates up into his fist, that thick white stuff flooding out the end. There was so much of it!

I didn’t go to my room this time. Instead, I hurried down the ladder and went back to hanging laundry, but that gnawing tickle took a long, long time to go away. Eli’s hand touched mine when I asked him to pass me the milk pitcher during dinner and I thought the heat that rushed through my torso would make me faint. He gave me a funny look, but I just kept my eyes down and finished eating.

Still, I didn’t stop watching. I couldn’t. I felt compelled, even though I knew it was a sin, I knew the devil was in me, and I had to rub him out. I tried. I did. I stood on the ladder, watching my brother pump himself like he was a well, waiting for that blessed moment
when the liquid finally surfaced
, and I lifted
my long skirts to touch myself
too.

I didn’t have what he had. Girls and boy had different parts, I knew that much from changing diapers for Ma when the babies needed it, but I never knew how complimentary the parts were, how different and yet how similar. I pressed myself there over my undergarments while I watched him, worrying myself between the legs again and again. I knew if someone came into the barn—if Da had come in…my blood curdled just thinking about it.

But he never did. And one day, when Eli was thrusting up into his hand and I was at my usual spot on the ladder, watching, I felt that little tickle between my legs build to a sneeze. Something had to give. My fingers moved, back and forth, around and around, my whole body tingling with sensation, and then…it happened.

I cried out—I couldn’t help it—my whole body trembling with the force of the devil inside of me, and I wondered briefly if I had finally driven him out. My legs wouldn’t hold me. They turned to jelly and I fell, catching myself halfway down only to lose my grip again and land, hard, on the dirt floor below.

“Sarah!” Eli was calling. I was okay, but dazed, breathless, still stunned by what had happened, and I didn’t answer him. He took the ladder two rungs at a time, sweeping me up over his shoulder and carrying me back up like I was a sack of potatoes.

When he had me on the hay, touching my face, calling my name, I finally opened my eyes. He
was concerned, but embarrassed
too, and I knew he was wondering how much I’d seen. Oh, Eli, I’ve seen so very much, I thought, catching his hand and bringing it up to my heart.

“I know it’s a sin,” I whispered, lifting his fingers to my mouth and kissing them. “But I can’t help it.”

“Help…what?” His dark, puzzled eyes met mine, and I searched his earnest face with my heated gaze.

“I saw you.” I admitted it, feeling the heat move into my cheeks. He flushed, too. “Eli, it was so wonderful!”

“No.” I swallowed hard at the thought and cradled his hand against my cheek. “I don’t want to tell.”

“Something that feels so good can’t be a sin,” I insisted, half sitting now, back on my elbows. “It can’t possibly. I just…I understand now. Why you keep doing it, how the whole world opens up for a moment and you feel like you’re dying, or flying. I felt like I could touch God himself.”

He was staring at me, wide-eyed. “How long were you watching?”

“I’ve watched lots of times.”
I lifted my chin, defiant, in spite of my
flushed cheeks. “I touch myself
too.”

I hesitated before slowly placing a hand between my legs, over my long skirts. “Here.”

Puzzled, he frowned. “But you don’t have…”

His eyes brightened, still focused between my legs. My hand still rested there. “Will you… show me?”

Stunned, I stared at him for a moment, unable to breathe. The sort of sin I’d committed so far was nothing compared to what he was asking. Only babies were allowed to be naked in front of others. I looked into his eyes, saw the eagerness, the h
unger there, the longing I felt
too, and slowly I started to lift my skirt. His gaze followed its path, up my knee-sock covered calves, and then my bare knees. He gasped when he saw those, his eyes following the path of my skirt up my bare thighs until I had it pulled up to my waist.

Then I pressed my hand between my legs, over the heated, damp mound there, and began to rub myself. He watched, fascinated, his breath coming almost as fast as mine.

“Have you ever taken these off?” he whispered, tugging at my undergarments.

I shook my head, my heart hammering in my chest.

“Will you?” he breathed, his eyes meeting mine. What I saw there made me want to do anything, anything at all for him. “Oh Sarah, please.”

The desperation in his voice moved me and I tugged them down and off. The air over my privates was cool, and I explored with my fingers a place I had only touched through my clothes, or when I quickly washed myself on Saturdays. The sensation was incredible, so intense, my fingers growing wet as I parted the dark hair and probed in between.

“That’s so lovely,” he breathed.

“Do you like it?” I asked, glancing down at my parted thighs, the dark triangle.

He nodded, eyes transfixed, and I saw his hand rubbing his privates again through his breeches.