Read In the Path of Falling Objects Online

In the Path of Falling Objects 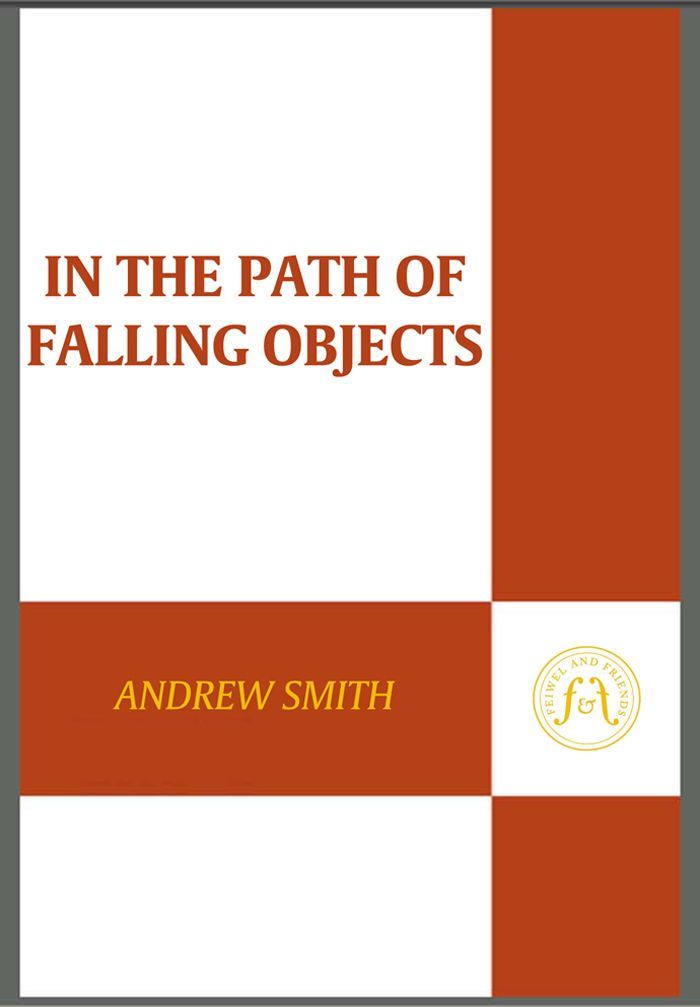 IN THE PATH OF FALLING OBJECTS

Square Fish and the Square Fish logo are trademarks of Macmillan and are used by Feiwel and Friends under license from Macmillan.

Summary: In 1970, after their older brother is shipped off to Vietnam, sixteen-year-old Jonah and his younger brother Simon leave home to find their father, who is being released from an Arizona prison, but soon find themselves hitching a ride with a violent killer.

For my brothers:
Patrick,
Stephen,
and William

The only shade there is blackens a rectangle in the dirt beneath the overhang of the seller’s open stall. The girl stands there, behind a row of hanging wooden skeletons that dangle from the eaves.

“You like the skeleton?” the seller asks. “Give me a price.”

“They look funny. Their arms are too long. They go down to their ankles,” she says. “And where do you get wood from around here, anyway? There’s not a tree for miles.”

The seller shrugs. He doesn’t understand.

Sometimes nothing is quieter than Mexico at ten in the morning in summer.

There is a statue of a knight made from tin. It stands facing the roadway.

The man standing next to the girl asks, “How much for that statue?”

“Give me a price,” the seller says.

The man nudges the girl and says, “Want to see something you’ll never forget?”

He presses a pistol barrel up beneath the seller’s chin.

There are pictures I can draw out on the map of our life, words I scratch on this paper, the hollow parts filled in with nothing but my guesses after Simon told me what happened when we split up.

I can say this now.

I can give you this map.

Our brother fell apart in the war.

Mother fell apart after that.

Then we had to leave.

Even in a perfect world the horse would not have carried me and my brother all the way to Arizona; it fell and died not ten miles away from our home in Los Rogues, New Mexico. And while I sat in the dirt and heat of the dusty road, looking at how my hands had been scraped when we fell, Simon, my stubborn little brother, tried to pretend he wasn’t crying, but he cried anyway and pressed his face into the knees of his jeans, soaking the fraying denim with his tears for more than an hour before even looking up at me.

And I don’t know what I was thinking. There was no way I could pull that dead horse out of the road, but I was so ashamed at leaving it there that I tried to anyway.

“What do you think you’re going to do, Jonah?” Simon said.

And I kept pulling dumbly on the horse’s leg, leaning my weight back as far as I could.

“We can’t just leave it here. It’s embarrassing.” I could feel the sweat crawling down my face.

“No one ever comes down this road.”

“Just our luck someone will today,” I said.

So I jerked at my canvas pack, pinned beneath the hulk of the horse’s flank, wiped my arm across my nose as I slung the pack over my shoulder, and tugged the dirty, sagging pants higher on my waist.

“We should go back home,” Simon said, his throat still choked tight from the crying.

Of course I knew that Simon didn’t really hate me. It’s just something brothers say to brothers, sometimes. Because I always believed that Simon was my best friend. I still do believe it.

Mother and Matthew, our older brother, said we always fought when we were little, but I don’t think that’s true. But we did have some pretty good ones, at times, and Simon almost always ended up getting me in trouble. He’d always been good at that.

By the time Matthew was in twelfth grade, he began spending less time at home. I couldn’t blame him. He’d gotten a job at the bowling alley, and he’d sometimes stay there all night, or sleep at a friend’s house just to stay away. But he’d always come back, especially at times when our mother would leave Simon and me there alone. Matthew would bring us food wrapped in waxed paper from the bar at the bowling lanes. We never said it out loud, growing up, but Matthew and I understood that we were all we had, and the three of us brothers needed each other just to survive.

There’s only one bed in our room, and when Matthew was home that meant Simon and I had to sleep on the floor with blankets, next to each other to stay warm. When it was real cold, we’d all three sleep in that bed. Sometimes I knew that Simon and I would lose patience with each other, too, because there’s only so much you can
put up with during the daytime from someone you have to sleep with every night of your life. At least, that’s how I look at it.

And now Matthew was gone. Simon and I didn’t talk much about where he was. The thought of losing him was more frightening than probably anything else. But we had also gotten used to his not being home, even if we’d never get used to the possibility of his not coming back. And there were things about Matthew that I knew, but never told Simon, and couldn’t tell Mother because after we stopped getting letters from him, she just shut down and then she vanished.

Now our horse was dead, and I felt so lost and scared. But I didn’t want Simon to know that, so I made him keep walking with me. He didn’t have a choice. And he hated that.

So we walked, Simon dragging his feet in the dirt of the road, following three paces behind me. His shoes were too big and he never tied them, so his feet made this awful snoring sound wherever he went.

And I looked back only once, where the road broadened out, curving around a creek bed where cottonwoods picketed, trunk upon trunk, silver-dollar leaves clattering like teeth, but I couldn’t see the horse.

“We’re going to keep going anyway. I promise I will take care of you.”

I knew Simon wouldn’t reply, and my words sounded so strange and hollow in the quiet of the afternoon. I guess I hadn’t really heard my voice in the past two weeks, or, at least, hadn’t noticed it as much as I did out there on the edge of the desert. Mother had gone off with one of her men friends for Georgia, or Texas, or someplace, and Simon and I had been left behind, alone in the crumbling shack of our home.

The electricity had been gone for days.

I was sixteen that summer. My jeans were cuffed even though I was already nearly six feet tall, and where they were folded they had begun picking up dirt and twigs. They first had belonged to Matthew. The shirt I wore had been ordered from an Alden’s catalogue; my brother had worn it, too, when it was new. The elbows were wearing through and I kept the sleeves rolled up, the tails tucked in tightly down inside my jeans, almost to my knees. It was too hot for flannel, anyway.

The last letter from Matthew came two months ago, at the end of the school year.

And all Matthew’s letters to me were in our pack, ordered, tucked beneath the carelessly wadded clothes and the canteen of piss-warm water that tasted metallic, like it had been strained through the filth in the drain of the streaked porcelain sink basin in the kitchen. At the bottom, under our clothes, was the comp book where I drew my map, and a small pistol.

So Simon and I came down from the hills where we lived, where we had abandoned our horse, the trees thinning out to open on the vastness of the desert, the dirt road stretching in a narrowing line to disappear among the mesas in the distance, the stream becoming nothing more than dampness, shaded somewhere beneath the rocks strewn to mark its path, following the road, or the road following it. On the opposite side of the bed, a derelict trailer sat crookedly, one wheel missing, the blackness of its doorway yawning upward at the shadows of gathering clouds.

We said nothing to each other.

It would rain soon; I could smell it.

The rain came in relentless slate sheets. We saw its approach, a smoky drape across the desert, sweeping toward us like some monstrous black broom, the first spitlike gobs of wet streaking down
through my hair and pasting my shirt to my chest. By the time we decided to go back to the doubtful shelter of the trailer, Simon and I must have looked like castaways climbing from the sea.

“Here.” I interlaced my fingers to give a boost for Simon’s foot at the edge of the trailer’s doorway.

“Why do I have to go in there first?”

I don’t know why I even put my hands down there. I should have known he would say something like that.

So I just looked at Simon, then, grabbing at either side of the doorway, heaved myself up into the dimness of that crooked trailer.

Water ran down from the top of the doorway, spilling across the blistered linoleum and pooling against the far wall, where gravity had pulled a collection of beer cans and other trash across the slope of the tilting floor. My wet hair hung down across my eyes and mouth. I swept it back over my head and reached a hand out into the rain to help my brother up into the trailer.

Kyland (Sign of Love #7) by Mia Sheridan
The White Tower by Dorothy Johnston
The Witch and the Huntsman by J.R. Rain, Rod Kierkegaard Jr
Here's the Situation by Mike "The Situation" Sorrentino
Double Dog Dare by Lisa Graff
Cracked Porcelain by Drake Collins
Escape to Earth 1: Running From Fate by Saxon Andrew
The Book of Duels by Garriga, Michael
Master Of Surrender by Karin Tabke
Undertow by Kingston, Callie
Our partner