Read In the Teeth of the Evidence Online 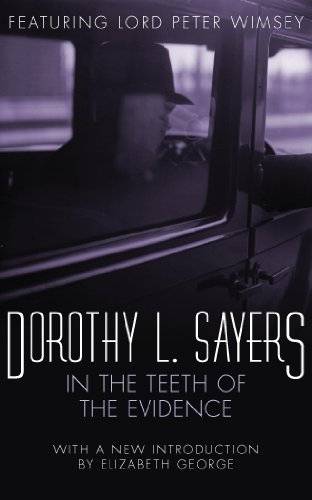 First published in Great Britain in 1939 by Victor Gollancz Ltd

First published in paperback by New English Library in 1969

An imprint of Hodder and Stoughton

The right of Dorothy L. Sayers to be identified as the Author

of the Work has been asserted in accordance with the

means without the prior written permission of the publisher,

than that in which it is published and without a similar

living or dead, is purely coincidental.

A CIP catalogue record for this title

is available from the British Library

A Shot at Goal

An Arrow O’er the House

The Inspiration of Mr Budd

I came to the wonderful detective novels of Dorothy L. Sayers in a way that would probably make that distinguished novelist spin in her grave. Years ago, actor Ian Carmichael starred in the film productions of a good chunk of them, which I eventually saw on my public television station in Huntington Beach, California. I recall the host of the show reciting the impressive, salient details of Sayers’ life and career – early female graduate of Oxford, translator of Dante, among other things – and I was much impressed. But I was even more impressed with her delightful sleuth Lord Peter Wimsey, and I soon sought out her novels.

Because I had never been – and still am not today – a great reader of detective fiction, I had not heard of this marvellous character. I quickly became swept up in everything about him: from his foppish use of language to his family relations. In very short order, I found myself thoroughly attached to Wimsey, to his calm and omnipresent manservant Bunter, to the Dowager Duchess of Denver (was over there a more deliciously alliterative title?), to the stuffy Duke and the unbearable Duchess of Denver, to Viscount St. George, to Charles Parker, to Lady Mary. . . . In Dorothy L. Sayers’ novels, I found the sort of main character I loved when I turned to fiction: someone with a ‘real’ life, someone who wasn’t just a hero who conveniently had no relations to mess up the workings of the novelist’s plot.

Dorothy L. Sayers, as I discovered, had much to teach me both as a reader and as a future novelist. While many detective novelists from the Golden Age of mystery kept their plots pared down to the requisite crime, suspects, clues, and red herrings, Sayers did not limit herself to so limited a canvas in her work. She saw the crime and its ensuing investigation as merely the framework for a much larger story, the skeleton – if you will – upon which she could hang the muscles, organs, blood vessels and physical features of a much larger tale. She wrote what I like to call the tapestry novel, a book in which the setting is realised (from Oxford, to the dramatic coast of Devon, to the flat bleakness of the Fens), in which throughout both the plot and the subplots the characters serve functions surpassing that of mere actors on the stage of the criminal investigation, in which themes are explored, in which life and literary symbols are used, in which allusions to other literature abound. Sayers, in short, did what I call ‘taking no prisoners’ in her approach to the detective novel. She did not write down to her readers; rather, she assumed that her readers would rise to her expectations of them.

I found in her novels a richness that I had not previously seen in detective fiction. I became absorbed in the careful application of detail that characterized her plots: whether she was educating me about bell ringing in
The Nine Tailors
, about the unusual uses of arsenic in
Strong Poison
, about the beauties of architectural Oxford in
Gaudy Night
. She wrote about everything from cryptology to vinology, making unforgettable that madcap period between wars that marked the death of an overt class system and heralded the beginning of an insidious one.

What continues to be remarkable about Sayers’ work, however, is her willingness to explore the human condition. The passions felt by characters created eighty years ago are as real today as they were then. The motives behind people’s behavior are no more complex now than they were in 1923 when Lord Peter Wimsey took his first public bow. Times have changed, rendering Sayers’ England in so many ways unrecognizable to today’s reader. But one of the true pleasures inherent to picking up a Sayers novel now is to see how the times in which we live alter our perceptions of the world around us, while doing nothing at all to alter the core of our humanity.

When I first began my own career as a crime novelist, I told people that I would rest content if my name was ever mentioned positively in the same sentence as that of Dorothy L. Sayers. I’m pleased to say that that occurred with the publication of my first novel. If I ever come close to offering the reader the details and delights that Sayers offered in her Wimsey novels, I shall consider myself a success indeed.

The reissuing of a Sayers novel is an event, to be sure. As successive generations of readers welcome her into their lives, they embark upon an unforgettable journey with an even more unforgettable companion. In time of dire and immediate trouble, one might well call upon a Sherlock Holmes for a quick solution to one’s trials. But for the balm that reassures one about surviving the vicissitudes of life, one could do no better than to anchor onto a Lord Peter Wimsey.

IN THE TEETH OF THE EVIDENCE

‘Well, old son,’ said Mr Lamplough, ‘and what can we do for you today?’

‘Oh, some of your whizz-bang business, I suppose,’ said Lord Peter Wimsey, seating himself resentfully in the green velvet torture-chair and making a face in the direction of the drill, ‘Jolly old left-hand upper grinder come to bits on me. I was only eating an omelette, too. Can’t understand why they always pick these moments. If I’d been cracking nuts or chewing peppermint jumbles I could understand it.’

‘Yes?’ said Mr Lamplough, soothingly. He drew an electric bulb, complete with mirror, as though by magic out of a kind of Maskelyne-and-Devant contraption on Lord Peter’s left; a trail of flex followed it, issuing apparently from the bowels of the earth. ‘Any pain?’

‘No
pain
,’ said Wimsey irritably, ‘unless you count a sharp edge fit to saw your tongue off. Point is, why should it go pop like that? I wasn’t doing anything to it.’

‘No?’ said Mr Lamplough, his manner hovering between the professional and the friendly, for he was an old Winchester man and a member of one of Wimsey’s clubs, and had frequently met him on the cricket-field in the days of their youth. ‘Well, if you’ll stop talking half a moment, we’ll have a look at it. Ah!’

‘Don’t say “Ah!” like that, as if you’d found pyorrhoea and necrosis of the jaw and were gloating over it, you damned old ghoul. Just carve it out and stop it up and be hanged to you. And, by the way, what have you been up to? Why should I meet an inspector of police on your doorstep? You needn’t pretend he came to have his bridge-work attended to, because I saw his sergeant waiting for him outside.’

‘Well, it was rather curious,’ said Mr Lamplough, dexterously gagging his friend with one hand and dabbing cotton-wool into the offending cavity with the other. ‘I suppose I oughtn’t to tell you, but if I don’t, you’ll get it all out of your friends at Scotland Yard. They wanted to see my predecessor’s books. Possibly you noticed that bit in the papers about a dental man being found dead in a blazing garage on Wimbledon Common?’

‘Last night,’ said Mr Lamplough. ‘Pooped off about nine pipemma, and it took them three hours to put it out. One of those wooden garages – and the big job was to keep the blaze away from the house. Fortunately it’s at the end of the row, with nobody at home. Apparently this man Prendergast was all alone there – just going off for a holiday or something – and he contrived to set himself and his car and his garage alight last night and was burnt to death. In fact, when they found him, he was so badly charred that they couldn’t be sure it was he. So, being sticklers for routine, they had a look at his teeth.’

‘Oh, yes?’ said Wimsey, watching Mr Lamplough fitting a new drill into its socket. ‘Didn’t anybody have a go at putting the fire out?’

‘Oh, yes – but as it was a wooden shed, full of petrol, it simply went up like a bonfire. Just a little bit over this way, please. That’s splendid.’ Gr-r-r, whizz, gr-r-r. ‘As a matter of fact, they seem to think it might just possibly be suicide. The man’s married, with three children, and immured and all that sort of thing.’ Whizz, gr-r-r, buzz, gr-r-r, whizz. ‘His family’s down at Worthing, staying with his mother-in-law or something. Tell me if I hurt you.’ Gr-r-r, ‘And I don’t suppose he was doing any too well. Still, of course, he may easily have had an accident when filling up. I gather he was starting off that night to join them.’

‘How do I come into it?’ said Mr Lamplough, who, from long experience was expert in the interpretation of mumblings. ‘Well, only because the chap whose practice I took over here did this fellow Prendergast’s dental work for him.’ Whizz. ‘He died, but left his books behind him for my guidance, in case any of his old patients should feel inclined to trust me.’ Gr-r-r, whizz. ‘I’m sorry. Did you feel that? As a matter of fact, some of them actually do. I suppose it’s an instinct to trundle round to the same old place when you’re in pain, like the dying elephants. Will you rinse, please?’

‘I see,’ said Wimsey, when he had finished washing out chips of himself and exploring his ravaged molar with his tongue. ‘How odd it is that these cavities always seem so large. I feel as if I could put my head into this one. Still, I suppose you know what you’re about. And are Prendergast’s teeth all right?’

Fortune's Deception by Karen Erickson
The Seeker A Novel (R. B. Chesterton) by R. B. Chesterton
Conspiracy by Buroker, Lindsay
Catalyst (Breakthrough Book 3) by Michael C. Grumley
The Last Starship From Earth by John Boyd
Brothers in Blue: The First Love Match by Concepcion, Jayna
Killswitch by Victoria Buck
A Piece of Mine by J. California Cooper
Hannah Howell by Stolen Ecstasy
The Cryptid Files by Jean Flitcroft
Our partner