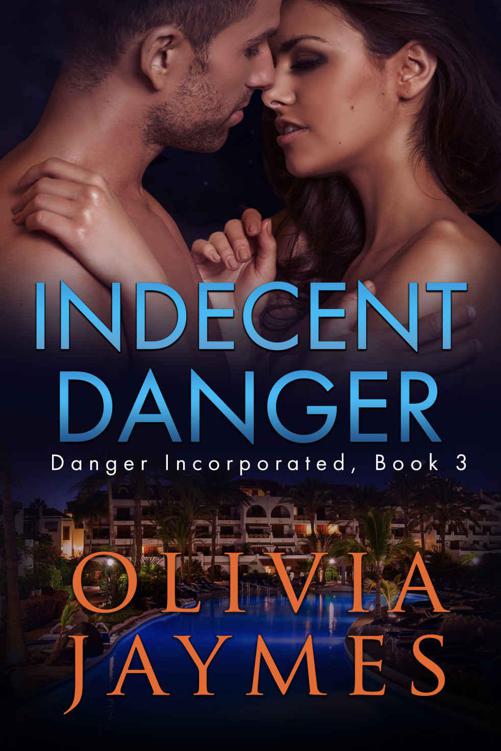 Travis Anderson is the picture of success. Handsome, sexy, and rich he could have pretty much any woman he wanted. Sadly, the only ones he seems to find think that size matters. The size of his wallet, that is. He wants a woman to love him for himself. Aubrey Grayson just might be the change he’s needed in his life.

Aubrey thinks Travis is an amazing man, with or without his fortune. Growing up in foster care, she learned to appreciate the simple things in life. She’s happy going on a picnic and watching the sunset. No wallet needed.

So when Travis takes her on an elegant weekend getaway in Florida, she doesn’t care about the beautiful gowns and dripping diamonds. What she does care about is bumping into the hateful man from her past who decides it would be fun to tell Travis all her shameful secrets.

When that man turns up dead, Aubrey quickly becomes a suspect and has to come clean to Travis about everything. Nothing in the world could be worse than admitting the whole sordid story… unless it’s being branded a killer.

But there’s no way Travis is going to allow Aubrey to go to prison for a murder she didn’t commit. If he has to catch the real killer himself, that’s just what he’ll do.

ALL RIGHTS RESERVED: The unauthorized reproduction or distribution of this copyrighted work is illegal. Criminal copyright infringement is investigated by the FBI and is punishable by up to 5 years in federal prison and a fine of $250,000.

A
ubrey Grayson’s high
heels clicked on the polished marble floors of the luxury suite where she and Travis Anderson would be staying for the next few days. She’d been in some fancy hotels since working for Travis but nothing had prepared her for this. It was far beyond anything she’d ever seen except perhaps on television.

She looked down at the royal blue wraparound dress she wore with a pair of silver sandals, and was glad she’d followed her instincts and dressed up a bit for the journey. Her usual blue jeans and white blouse would have looked out of place in these opulent surroundings.

“Will there be anything else, Mr. Anderson?” the bellman asked after unloading the bags in the two bedrooms. “Shall I send someone up to unpack for you?”

“We’re fine, thank you.” Travis tipped the man and received a giant smile in return as the bellman retreated out of the door, leaving them alone in the sumptuous suite.

Aubrey had been Travis’s administrative assistant for six months and his girlfriend for one so she ought to be used to the wealthy circles in which he traveled, but it still never ceased to amaze her how the one percent lived. It was as far from her own humble background as the moon from the earth.

Placing her purse down on the sofa, she ran her hand over the butter-soft leather while admiring the striped silk throw pillows. The suite was spectacularly over the top.

It was the only way Aubrey could describe it. Large floor to ceiling windows lined one wall that overlooked the emerald green waters of the Gulf of Mexico. But if you didn’t want to look at the view, the large living room boasted two pristine beige couches that faced a flat-screen television. The other side of the suite held the wet bar and the dining area, the table large enough to seat six.

Directly in front of her was a round, dark oak coffee table with a crystal vase placed in the center filled with two dozen pink long-stemmed roses.

Her favorite flower and Travis knew it.

She leaned over and breathed in the heady fragrance of a bloom while her fingers caressed a velvety petal.

“They’re beautiful. You spoil me.”

Travis stepped in behind her and pulled her back against his warm body, nuzzling her neck. “Not nearly as beautiful as you are but I’m glad you like them. You deserve to be spoiled, Bree, and I’m just the man to do it. There is also supposed to be a bucket of champagne around here somewhere so we can celebrate the start to our weekend. Just the two of us.”

She nodded toward the bar but didn’t move from his embrace, letting herself luxuriate in his hard muscled arms for a little longer than she should. She breathed in his scent feeling slightly light-headed, he smelled delicious with just a hint of spice and citrus to tease her nostrils.

“Just the two of us?” she queried, twisting so she was looking up at his handsome face. “I thought we were here for your friend’s annual birthday party. It sounds like the two of us plus about a hundred of his closest friends.”

Travis chuckled and quickly pressed a kiss to her forehead before striding over to the bar area. “More like fifty, but you’re right—it’s still a crowd. Don’t worry, there will be plenty of time for just the two of us. I’ll make sure of it. Here’s that champagne.”

When they were alone everything was fine. Aubrey felt comfortable when it was the two of them hanging around his house cooking dinner and watching television. It was when they were with other people that she felt…out of place. It was as if his friends and acquaintances could look right through her and see that she didn’t belong there.

She was a foster kid from the streets of Chicago and Travis was a wealthy and well-educated, sought after bachelor. He traveled the world and moved in these circles on a daily basis. All of this was old hat to him while she was simply trying not to stand out like the proverbial sore thumb. She’d hate to embarrass him or herself, but better the latter than the former she supposed.

She still wasn’t sure what Travis saw in her. With his short dark hair, vivid green eyes, and all-American good looks, he was adored by women young and old. It was only a matter of time before he moved on to a more suitable female. Someone who dressed in designer fashions and knew which fork to use.

Smiling and showing off that dimple in his cheek, Travis handed her a champagne flute filled with bubbly golden liquid before lifting his own in toast. His gaze roamed her figure head to toe and it was clear from the warmth in his eyes he liked what he was seeing, which only caused her to grip the crystal flute that much tighter.

“Here’s to a wonderful weekend and some quiet time for the two of us.”

“Quiet time,” she echoed softly, giving him a smile when what she really wanted to do was run back outside and take the first plane back to Montana. She was tempting fate with this weekend away with him and chances were high that it was all going to implode on her at the worst possible moment.

They clinked glasses and she sipped at the cool elixir even as her throat tightened at his words. She had a feeling that “quiet time” was a polite euphemism for something much more intimate and more passionate. The suite might have two bedrooms but Travis had a gleam in his eye that spoke louder than words.

He wanted to make love.

Whatever it was called, Travis was a man of strong appetites and used to getting them fed on a regular basis by a bevy of gorgeous, willing women. When he’d asked Aubrey out she was positive he’d had no idea that he would be kept in a holding pattern for a solid five weeks. She doubted if he’d waited that long since his high school or college days.

Just the thought of her own high school years made her inwardly wince and she deliberately pushed all those disturbing images away. determined to enjoy this time with the man she adored. She changed the subject to get her mind back under control.

“So tell me about this friend of yours that I’m going to meet this weekend.”

Aubrey settled onto one of the couches and Travis sat beside her, his hard thigh brushing against hers, a delicious distraction. It hadn’t been easy keeping him at arms’ length since they’d started dating. He was handsome, smart, funny, and sexy and she was only human. Her dreams were filled with all the naughty things they might do together but hadn’t. Yet.

“Our host is Martin Guinness, the hedge fund manager. He was a mentor for me since my Harvard years and he’s just an all-around great guy. He basically taught me pretty much everything I know about the business world. He’s a financial genius.”

“You flatter me, Travis. I’m simply a man who is good at math.”

Travis jumped from the couch, a wide grin spreading across his face. Aubrey turned to see a tanned, silver-haired gentleman standing in the still open doorway of their suite. Smiling, he strode forward to shake Travis’s hand before they both embraced like long lost friends.

Martin looked younger than the seventy-three years she knew him to be. Maybe it was the relaxed air he had about him that immediately put Aubrey at ease. Normally she felt uncomfortable around Travis’s wealthier friends but clearly this man didn’t stand on ceremony, eschewing formalities. He reached for her hand and gave her a friendly grin as she also stood to greet their guest.

“You must be Aubrey. I’ve heard so much about you. I’m glad you could join us this weekend for a little celebration.”

He had a kind twinkle in his eyes that made her smile in return. “Thank you. I hear a happy birthday is in order.”

“Thank you. This is really the best gift I could get. All my friends and family gathered in one place. When you get to be my age, my dear, it isn’t things that make you happy. It’s experiences.”

Aubrey couldn’t help but agree with those sentiments even though she was much younger than Martin.

“Actually I was hoping I could have a word or two with you, Travis. If you have a few minutes.” Martin’s smile had disappeared and in its place he wore a frown. “I hate to bother you but it’s important. It’s regarding what we talked about last week.”

Travis nodded, his own expression bland. Aubrey had come to recognize it whenever he talked business that was particularly unpleasant. “Of course. Why don’t I meet you down in the bar in about five minutes?”

Martin quickly agreed and exited the suite, leaving Aubrey alone with Travis again. Now there was a definite tension in Travis’s shoulders that hadn’t been there before Martin arrived, and for a moment she thought about asking him what the meeting was about. She was Travis’s assistant so she was often privy to information of a sensitive and confidential nature. However, she didn’t get the chance as he abruptly turned on his heel to place his now empty champagne flute on the bar.

“I shouldn’t be downstairs too long.” He straightened his tie before checking his phone, a frown furrowing his forehead. “Will you be okay up here by yourself?”

The Square Peg by Davitt, Jane, Snow, Alexa
The Broken Wings by Kahlil Gibran
Bing Crosby by Gary Giddins
Bugsy Malone by Alan Parker
Love is Just a Moment by Taylor Hill
Bill O'Reilly's Legends and Lies by David Fisher
The Sea Detective by Mark Douglas-Home
Back in Black by Zoey Dean
Rising by Kassanna
The Secret Crown (2010) by Chris Kuzneski
Our partner