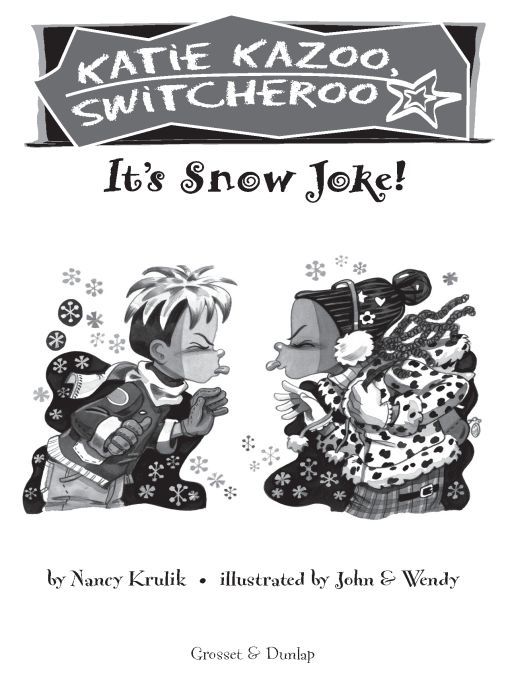 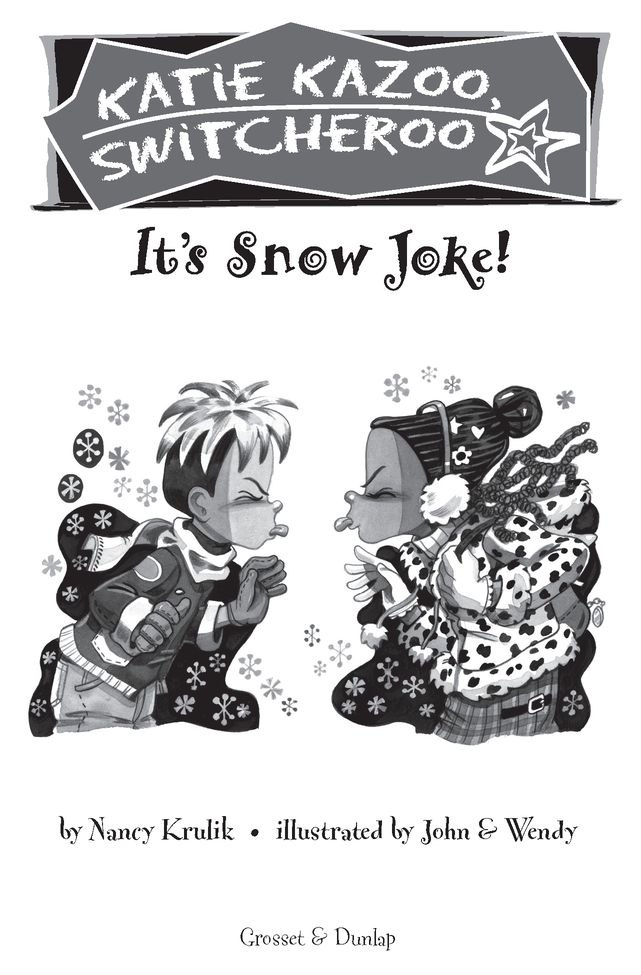 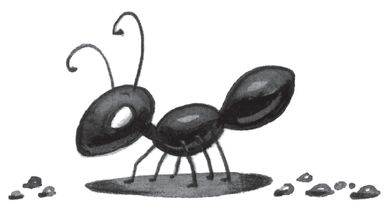 Chapter 1
“Okay, now all the forager ants can start searching for food!” Mr. Guthrie told the kids in class 4A.
Katie Carew giggled as she began looking along the windowsills for the treats Mr. G. had hidden around the room.
Katie’s fourth-grade class was studying animal behavior. Some classes might read books about how ants lived. But that wasn’t the way Mr. G. taught. In his class, the kids were pretending that they
were
ants in a colony. They were all wearing wire antennae on their heads. And they had each been given an antlike job.
“Okay, once you forager ants have gathered the food, bring it back to the center of the room,” Mr. G. said. “Then the queen, the nursery worker ants, and the ants that are in charge of cleaning up waste can have a snack. But remember, anybody who is a patrol ant will have to wait. You can’t eat while you’re guarding the colony.”
“Hey, that’s not fair!” George Brennan shouted out. He was a patrol ant. “I want a snack, too.”
“You’ll get one,” Mr. G. assured him. “But you can’t leave your post. Suppose a bird was coming near the anthill. You’d have to warn the others.”
George frowned, but he stayed at his post near the classroom door.
“Hurry up, forager ants,” Mandy Banks said. She adjusted the gold crown on her head. “It takes a lot of energy for me to lay enough eggs to keep this ant colony going!”
Katie giggled. Mandy sure loved being the queen ant. 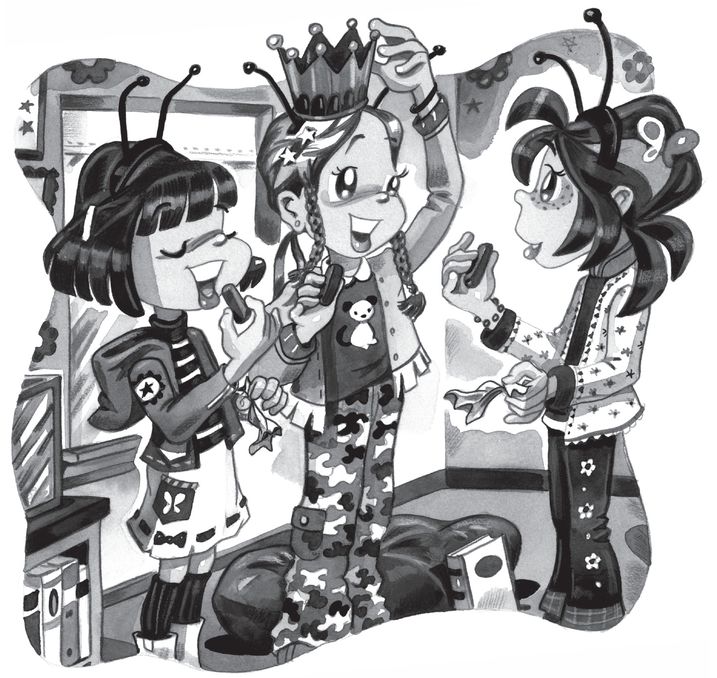 “Once everyone has eaten, the ants who are on clean-up patrol should get rid of the waste—which means picking up all the candy wrappers and throwing them in the trash,” Mr. G. told the kids.
“In a real ant colony, getting rid of waste means getting rid of dead bodies,” Kadeem said. “I read about that on the Internet.”
“Ooo, yuck,” Emma Weber groaned. She was one of the ants who was supposed to clean up. “I think I just lost my appetite.”
“More for
me
,” Emma Stavros, a forager ant, told her. She popped a snack-size chocolate bar into her mouth.
“Man, I wish I was a forager ant,” George groaned from the doorway.
Katie stared at him. “Don’t say that!” she exclaimed loudly.
The kids all stared at her.
“What’s with you?” Kevin Camilleri asked.
Katie gulped. She hadn’t meant to shout. It was just that Katie hated wishes. She knew how much trouble they could cause when they came true. 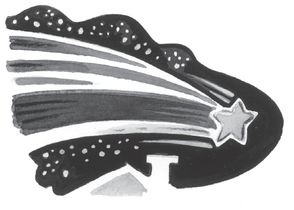 Chapter 2
It had all started last year, when Katie was in third grade. She had had a miserable day. First she had lost a ball game for her team.
Then she’d fallen into the mud and ruined her new jeans.
Worst of all, she’d let out a giant burp, right in front of the whole class. The kids had really teased her about that.
It had been one of the most embarrassing days of her life. And that night, Katie wished to be anyone but herself. There must have been a shooting star flying overhead, because the very next day the magic wind came.
The magic wind was like a powerful tornado that blew just around Katie. It was so strong that it could turn Katie into somebody else! One, two . . . switcheroo!
The first time it happened, the magic wind had turned Katie into Speedy, the third-grade class hamster! Katie spent the whole morning going round and round on a hamster wheel and gnawing on chew sticks!
The magic wind had come back many times after that. Sometimes it changed Katie into other kids, like her friend Jeremy Fox. Other times it turned her into grown-ups she hardly knew, like Cinnamon, the woman who owned the candy store in the Cherrydale Mall. What a mess
that
had been! Katie had accidentally sent candy hearts with mean messages to some of her friends at school. She’d almost ruined Valentine’s Day forever!
Another time, the magic wind had turned Katie into Lucky, Jeremy’s kitten. She’d had to lick herself clean—which meant swallowing pieces of kitten fur.
Blech
. Even worse, Katie’s own dog, Pepper, had chased her up a tree.
That was why Katie didn’t like wishes coming true.
“I . . . um . . . just meant that you shouldn’t wish for a different job, George,” Katie said, trying to explain her outburst. “Every ant helps the colony.”
“That’s exactly right, Katie!” Mr. G. said, his antennae bouncing up and down. “No ant would ever wish to be anyone else.”
Katie sighed. Ants were smarter than they looked. 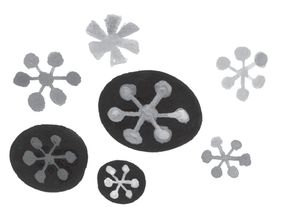 Chapter 3
“That was so much fun,” Kevin Camilleri said as he and the other kids in class 4A left the school building at the end of the day.
“So is this,” Kadeem Carter added as he held out his tongue and tried to catch some of the snow that had just started to fall.
“Mr. G. had so many treats for us to find,” Katie agreed.
“And eat,” George reminded her. He rubbed his belly. “Those Peppermint Patties were really good, weren’t they, Katie Kazoo?”
Katie grinned. She loved when George called her by the way-cool nickname he had given her back in third grade.
“I didn’t want to give up that crown,”
Mandy admitted. “It was awesome being queen for a day.”
“You guys are so lucky,” Jeremy Fox said. “We’re studying animal behavior, too. But we’re doing research projects in the library.”
Katie gave her friend an understanding smile. Jeremy was in the other fourth-grade class—4B. His teacher, Ms. Sweet, was very, very nice. But she wasn’t as interesting as Mr. G. The kids in class 4A definitely had more fun than the kids in 4B.

Sound of the Heart by Genevieve Graham
Intimate Portraits by Dale, Cheryl B.
The Hound of Bar Harborville (A Jane True Short Story) (Trueniverse Book 1) by Nicole Peeler
Another way by Martin, Anna
Esperándolo a Tito y otros cuentos de fútbol by Eduardo Sacheri
Up In Flames by Lori Foster
Gone with the Wool by Betty Hechtman
Redrum by Boston George
Nashville 1 - Ready to Reach by Inglath Cooper
Mozart's Last Aria by Matt Rees
Our partner