Read Jack Blank and the End of Infinity Online

Jack Blank and the End of Infinity 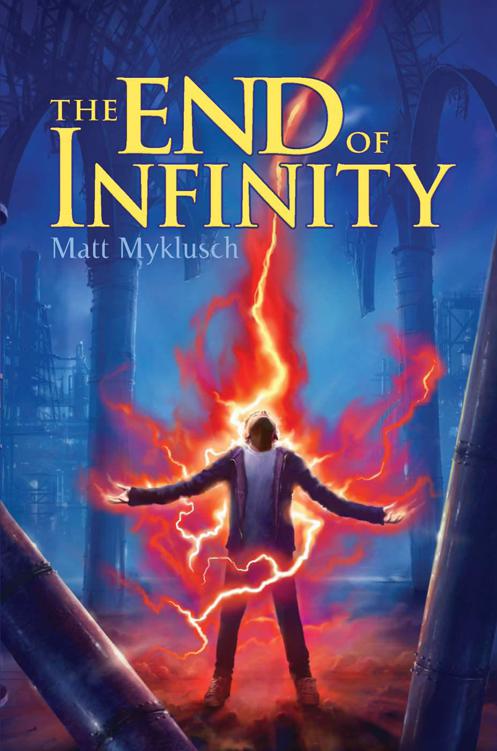 “L
ike Harry Potter and luke Skywalker before him, Jack Blank is a mythic hero.”

T
HE
A
CCIDENTAL
H
ERO

Chapter 1:
GHOST IN THE MACHINE

Chapter 5:
THE
HARBINGER
OF DOOM

Chapter 10:
A FRIEND IN NEED

Chapter 11:
THE COLD AND THE CALCULATING

Chapter 17:
THE EVE OF DESTRUCTION

Chapter 19:
THE FATE OF JACK BLANK

Chapter 25:
THE END OF INFINITY

Chapter 27:
LIFE ON THE LAUNCHPAD

Voices echoed in Jack’s ears. The blackness surrounding him began to take shape and light faded in as if someone were sliding a dimmer switch, stopping at a dull amber glow. It took a moment for Jack’s eyes to adjust. Once they did, he found himself surrounded by the Rüstov. Judging by the appearance of his captors, he was in the presence of royalty. He had been taken to the emperor’s throne room.

The Rüstov’s typical architecture and design, represented by a chaotic mess of jury-rigged scrap, was eschewed here in favor of a clean, industrial aesthetic. Smooth steel panels lined the walls, with giant rivets drilled into their edges. Massive I beams filled the chamber, running from the floor all the way up to the ceiling. By Rüstov
standards, they were the equivalent of intricately painted frescoes and marble columns—a lavish display of elegance. Fresh-faced nobles dressed in fancy robes stared at Jack in silence. On the far side of the room, a small run of steps led up to a large iron throne. The chair was spun around, facing the other direction, its occupant looking out a window into space. Jack tried to move, but he was held fast by one of the Magus’s imperial guards. He struggled against its grip, but he had no strength.

Jack’s thoughts were sluggish, like someone had poured cement into his brain. His powers had no effect on the guard, who, like the nobles, was using a host that had very little techno-decay. Standing next to Jack, also locked in the grip of another Rüstov guard, was a man dressed in prison rags. He was clearly terrified.

“What is this?” Jack asked, his voice weak and groggy. “What’s going on?”

“Silence!” the guard behind Jack shouted, striking him on the head.

Jack’s head throbbed with pain. Lacking the energy even to give the guard a dirty look, he opted to hold his tongue rather than risk another blow. A bluish-white
spotlight switched on above the throne, and the chair slowly rotated until Jack was face-to-face with the Magus. The guard holding Jack immediately dropped to one knee and forced him to genuflect before the emperor as well. Jack tried to look up, but the guard pushed his head back down. “Bow your head, meat. You do not look at the Magus.”

From his knees, with the Rüstov guard’s hand on the back of his head, Jack peered up at the Magus as best he could. Despite his limited vantage point, it was plain to see that the Magus was unlike any Rüstov he had ever encountered before. Rüstov host bodies were typically withered, frail husks that had been sucked dry by their parasites. They were broken shells of people, with veins that had been turned into circuits, bones that had been morphed into rusty metal, and organs that had been transformed into greasy, ramshackle contraptions with dirty gears. Jack had seen the ruinous effects of Rüstov infections firsthand in the many Para-Soldiers he’d fought over the years. The host body that the Magus inhabited exhibited none of the mummified, zombielike features he’d come to expect from the Rüstov. The Magus was in peak physical condition—
a strong, perfect, muscle-bound specimen with almost no sign of infection.

The Magus rose from his seat and walked toward Jack and the other prisoner. The closer he got, the less Jack saw of him. With his head pressed firmly toward the ground, Jack could see only a pair of bare feet advancing along the path, beneath the folds of a snow-white robe. The prisoner next to Jack was whimpering. Jack didn’t waste words trying to tell him that everything was going to be all right. He knew better.

Jack heard a loud
pop-hiss
noise, like a knife stabbing a can of soda, and the Magus’s body collapsed to the floor. The Rüstov emperor had released his host. Jack had a clear view of the unconscious body until it was dragged out of sight by the greedy hands of other Rüstov royals. He could picture the parasitic nobles fighting over the body as if it were some kind of stylish hand-me-down. As the Magus’s former host was pulled away, his white robe stayed behind. Something was stuck beneath it, trying to punch its way out from under the folds of fabric. Jack, who had never seen a Rüstov without its host before, gasped when a scrap-metal scorpion the size of a small dog crawled out into the
open. It snapped its claws and curled its tail to strike.

The guard beside Jack let go of the other prisoner, and the guard behind him relaxed his grip on his head. Jack craned his neck up and looked around. The prisoner next to him ran to the exit and banged on the door, unable to open it. Frantic, he ran off in the other direction, but the Rüstov soldiers that lined the perimeter of the room threw him back into the center. The guard behind Jack laughed. He and his fellow Rüstov watched the scene play out like a sporting event. Trapped in the Magus’s chamber, the helpless prisoner backed away from the iron scorpion on the ground. His eyes darted back and forth, wide as golf balls. “Help me!” he screamed, looking directly at Jack. “Please!”

Jack was speechless. He was powerless to stop what was about to happen. The doomed man backed away from the hostless Magus and tripped over the steps leading up to the throne. He fell on his rear end and shuffled backward up the steps. The scorpion pounced. It crawled up the man’s leg in a flash and skittered over his chest. Jack could tell what was coming next. The scorpion latched onto the man’s shoulder with its tail, and then disappeared around his back. There was a noise like a heavy shovel digging into
the earth, and Jack cringed as the man cried out in pain. Jack turned away, unable to watch the rest of the transformation. He saw only the Magus’s shadow on the wall as his shape went from being that of a man to something else. Something large and terrible. The screaming stopped and the Magus’s silhouette relaxed. The Rüstov emperor breathed out a sigh of relief and stretched. Jack turned back toward the Magus as his aides draped his robe over him and tied it off at the waist. The guard pushed Jack’s head down again. Jack made no effort to look back up this time around. He had seen enough.