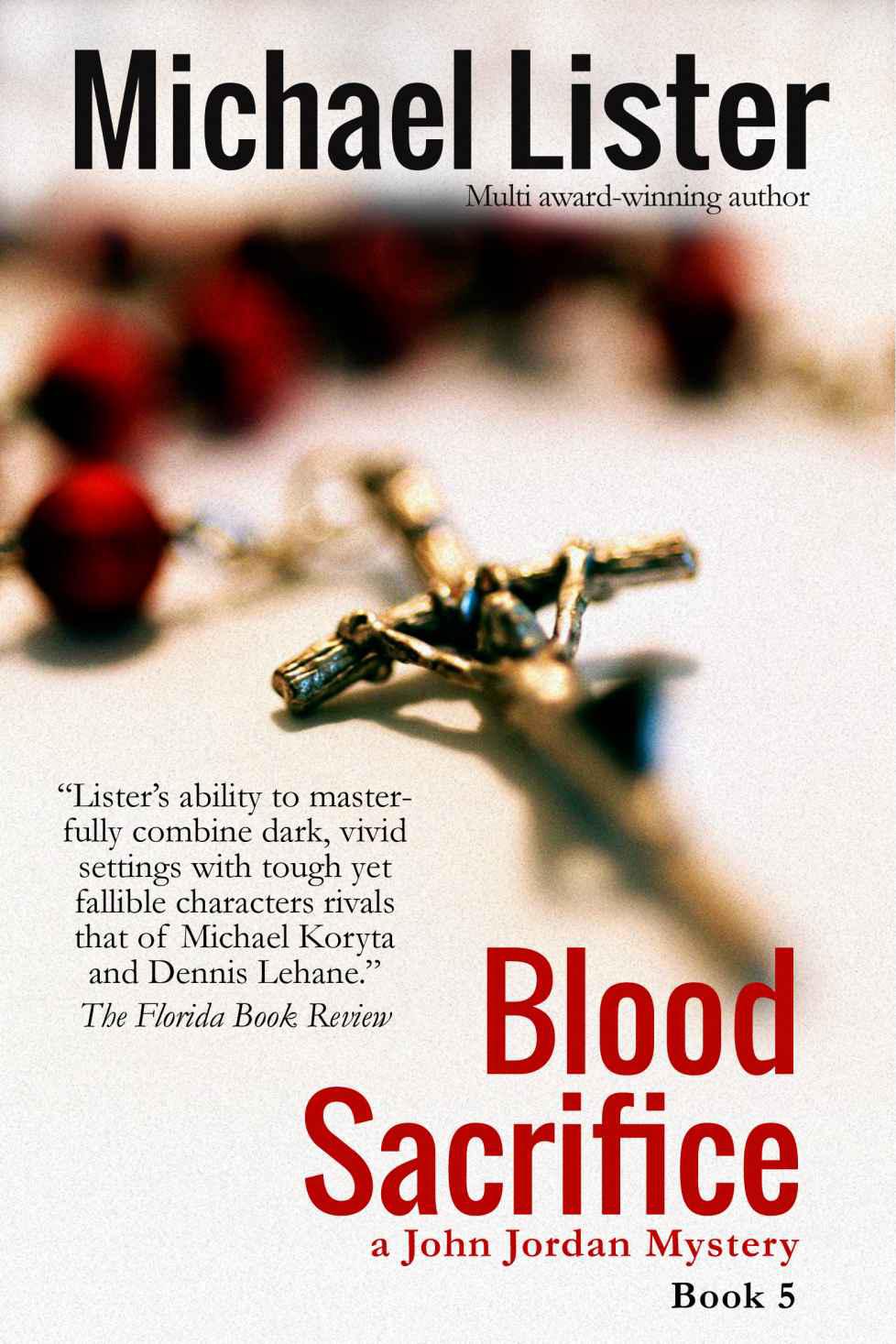 All rights reserved. No part of this book may be reproduced in any form or by any means, electronic or mechanical, including photocopying, recording, or by any information storage and retrieval system, without permission in writing from the publisher.
This is a work of fiction. Any similarities to people or places, living or dead, is purely coincidental.
Inquiries should be addressed to:
Pulpwood Press
P.O. Box 35038
Panama City, FL 32412
Lister, Michael.
Blood Sacrifice / Michael
Lister.
–—1st ed.
p. cm.
ISBN: 978-1-888146-95-0 Hardcover
ISBN: 978-1-888146-96-7 Paperback
ISBN: 978-1-888146-97-4 Ebook
Library of Congress Control Number:
Book Design by Adam Ake
Printed in the United States
1 3 5 7 9 10 8 6 4 2
First Edition

A true and faithful friend,
a brother in spiritual and artistic adventures.

I was walking along the bay, searching for serenity, when the first body was discovered.

It was a cold December day, especially for North Florida, and the breeze blowing in off St. Ann’s Bay stung my face and brought tears to my eyes. The sun was out, and though it was bright enough to make me squint, the day was dull and had a grayish quality I associated with the muted colorlessness of winter.

Taking a break from the demanding duties of prison chaplaincy at a maximum security facility, I had come to the small coastal town of Bridgeport following the second breakup of my marriage, which had come on the heels of two homicide investigations that had taken more out of me than I had realized.

Raised in a law-enforcement household and working as a cop to pay for seminary, I found myself continually getting involved in investigations. Though chaplaincy was draining enough, it was dealing with crime day after day as an investigator that had left me depleted and depressed, unable to deal with the second death of my marriage.

I had been fighting a losing battle against a powerful undertow, but rather than drown I had washed up on the shores of St. Ann’s Abbey, a secluded retreat center among the ubiquitous slash pines of the Florida Panhandle. Now, it was no longer just my pride or career or even my marriage, but my very soul I was trying to save.

A crime scene was the last place I needed to go, but from the moment I saw the flashing lights near the marina, I found myself moving toward them—irresistibly drawn, like an addict, to that which threatened to destroy me.

I glanced behind me. The shoreline was nearly empty, only a few early morning walkers in the distance—senior citizens in pastel warm-up suits from the look of them. Without thinking about it, I picked up my pace and moved deliberately toward the emergency lights and the crime scene beyond them, the damp sand clinging to my tennis shoes as I did.

The first person I encountered near the entrance of the marina was a pale young police officer with a sparse beard, a round face, and an extra fifty pounds.

Far too friendly and eager to help, he was one of the few cops I had ever encountered who erred on the side of serving.

He glanced back beyond the emergency vehicles to the other officers, detectives, fishermen, and EMTs swarming the body.

“Not really
at
this one,” he said.

“You’ll be at more than you want to before you retire or resign,” I said.

Beyond him, the massive metal skeleton of Bridgeport’s abandoned paper mill stood still and quiet, rising out of the fog like the rusting remnants of a former, less sophisticated civilization. Scheduled for demolition in a few days, soon the largest symbol of dying old North Florida would be no more.

“Looks like they could use some help,” I said. “I better get on up there.”

“Is Steve Taylor still the chief here?” I asked.

“He was a deputy for my dad over in Potter County a lifetime or two ago.”

“Thanks,” I said, pushing past him before he realized what he was doing.

I turned around to face him, my eyebrows shooting up.

“If your dad ever has any openings…”

“I’ll put in a good word for you,” I said.
Dad likes hiring guys who can’t even keep a crime scene secure
.

“Lucky her,” I said, and continued walking.

“I got it from your name tag.”

“Oh,” he said, and looked down at his shirt.

While he studied his shirt, I hurried down the dock, its weathered and splintered planks creaking beneath me as I did, the early morning fog adding to the perpetual dampness provided by the water, and I could feel the sticky moisture on my skin and in my hair.

Past the police cars and ambulance, the small body of a young man was splayed in a spreading pool of water, his wet clothes and hair clinging to his body and the dock, the small group of officers and EMTs gathered around him. I couldn’t tell for sure from this distance, but he resembled one of the troubled teens I’d seen at St. Ann’s.

“The hell you think
you’re
doin’?”

I looked up to see one of the officers walking toward me. He had the muscle-turned-fat build of an aging jock, but he carried himself as if he were unaware of the metamorphosis that had taken place in his unsuspecting body.

“I don’t care who the fuck you are. This is a crime scene. Get outta here ‘fore I arrest your ass.”

“The floater?” he asked.

I looked at the body again. No way he was a floater. Not only were there no signs of fixed lividity, but the body had yet to begin to decompose.

Ordinarily when a person drowns, his or her body sinks to the bottom, head, hands, and feet hanging down, and stays there until decomposition causes gas to form in the tissue, making the body rise to the surface.

“The dude we found in the water,” he said slowly, shaking his head. “You know him?”

“The fuck you talkin’ about?” he asked, glancing over his shoulder at the others, who returned his look of incredulity and his laughter. “We fished his ass out of the water.”

“You may have, but he wasn’t floating at the time.”

He turned to the others again. “Believe this guy?” Turning back to me, he said, “The hell else do you do in the water?”

“Sinking, floating, all I know is he sure as hell wasn’t swimming,” he said. “You know him or not?”

“Prison chaplain,” I said. “I’m staying at St. Ann’s and I think I saw him a couple of times in chapel.”

“Well, you won’t be seeing him there anymore—except maybe at his funeral. Take a closer look so you can get out of here.”

As I approached the body, the small group backed away from him slightly. When I reached him, I knelt down and said a prayer.

“Thomas I think. They called him Tommy Boy.”

“Thanks,” he said, his tone dismissive. “‘Preciate it.”

“But not floating,” I said.

“Look, I’m sorry I called him a floater. I didn’t know you knew him.”

“You really need to go so we can get to work.”

“Where’d you find the body?” I asked.

“It was caught in the net of a shrimp boat,” a thick-bodied female EMT with short, wiry hair and a large, not unattractive face said.

“Thanks,” I said. “Have you already gotten a temp for the body, the water, and the air?”

She shook her head. “We just got here and were told to wait for Chief Taylor.”

“You need to go ahead and take them. They’re crucial in establishing time of death in a drowning.”

“Listen,” Muscle-fat said, “we’ve been patient with you, but you’ve got to go before the chief gets here. We’ve got the floater situation under control.”

I’m not sure exactly why I did what I did next, but I suspect it had something to do with the deteriorated, self-destructive state I was in. Without really thinking about what I was doing, I scooped up the body and tossed it back into the bay.

“What the fuck are you doin’?” Muscle-fat said, as the others gathered around me.

The body made a splash when it went into the water, ripples moving out from the entry point, but long after the water was smooth again, the body had yet to resurface.

I took in some air through my nose, and the briny smell of the bay filled my nostrils.

We all stood there for a long moment, watching the spot where the body had entered the water.

“Guess you weren’t dealing with a floater after all,” I said.

“And didn’t have it under control either,” the female EMT said to him.

Kicking off my shoes, I dove into the cold water and retrieved Tommy Boy’s body. Lifting him up as far as I could, the others took hold of him and had him lying on the dock again by the time I was out of the water.

“Arrest his ass,” Muscle-fat said to the middle-aged officer standing closest to me. “And radio the chief.”

I turned and held my arms behind me and Middle-aged snapped on the cuffs, led me to his car, shoved me into the backseat, and slammed the door.