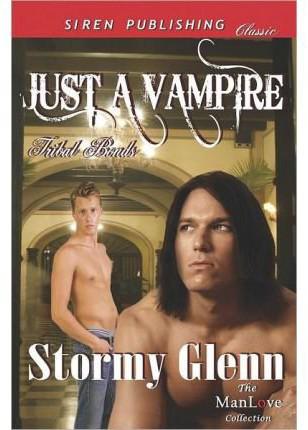 Electus Luca Ucathya has waited hundreds of years to find his anamchara, his soul mate. Rowan Connelly is not what he expected. For one, the man doesn't have a submissive bone in his body. Even worse, Rowan is a wolf, one of the most dangerous and hated enemies of a vampire. But giving Rowan up isn't an option.

When Rowan is kidnapped, not once but twice, Luca knows he has to do everything in his power to keep his mate safe, something that would be much easier if Rowan would accept his place as the mate of a vampire and behave. Instead, Rowan is drawing Luca into more trouble with every breath.

Siren Publishing, Inc.
ABOUT THE E-BOOK YOU HAVE PURCHASED:
Your non-refundable purchase of this e-book allows you to only ONE LEGAL copy for your own personal reading on your own personal computer or device.
You do not have resell or distribution rights without the prior written permission of both the publisher and the copyright owner of this book.
This book cannot be copied in any format, sold, or otherwise transferred from your computer to another through upload to a file sharing peer to peer program, for free or for a fee, or as a prize in any contest. Such action is illegal and in violation of the U.S. Copyright Law. Distribution of this e-book, in whole or in part, online, offline, in print or in any way or any other method currently known or yet to be invented, is forbidden. If you do not want this book anymore, you must delete it from your computer. WARNING: The unauthorized reproduction or distribution of this copyrighted work is illegal. Criminal copyright infringement, including infringement without monetary gain, is investigated by the FBI and is punishable by up to 5 years in federal prison and a fine of $250,000. If you find a Siren-BookStrand e-book being sold or shared illegally, please let us know at
[email protected]
A SIREN PUBLISHING BOOK
IMPRINT: Erotic Romance ManLove

If you have purchased this copy of
Just a Vampire
by Stormy Glenn from BookStrand.com or its official distributors, thank you. Also, thank you for not sharing your copy of this book.

This is Stormy Glenn’s livelihood. It’s fair and simple. Please respect Ms. Glenn’s right to earn a living from her work.

DEDICATION
To my Yahoo! group who helped me come up with the wonderful series name, and to Helen, who won!
JUST A VAMPIRE
Tribal Bonds 1
STORMY GLENN
Copyright © 2012
Chapter 1

Blond hair sufficiently frosted and spiked?
Check.
Black eyeliner expertly applied to bring out the green in my eyes? Check.
Lips plump, shiny, and looking like I could suck a golf ball

through a hundred feet of garden hose?
Check.
See-through T-shirt tight over chest and short enough to show off

my belly button ring?
Check.
Pants low on my hips and hugging my ass so tight I can’t breathe? Check.
Rowan Connelly laughed at himself in the bathroom mirror. He

could breathe but just barely. If he sat down, his close-fitting black leather pants were in serious jeopardy of splitting at the seams and maybe a ball or two would be crushed in the process. But as long as they hung low on his hips and hugged his ass, who gave a crap?

He patted his hair one last time then went into his bedroom and retrieved a strip of condoms—yeah, he was overly optimistic—and small tube of lube from his nightstand and pushed them into his front pocket. He pushed his identification into his back pocket along with some cash then headed toward his living room to wait for his ride.

Twenty minutes into pacing back and forth in front of the front window and he was about ready to go on his own. His brother Seth was never good at arriving anywhere on time, but this was ridiculous.