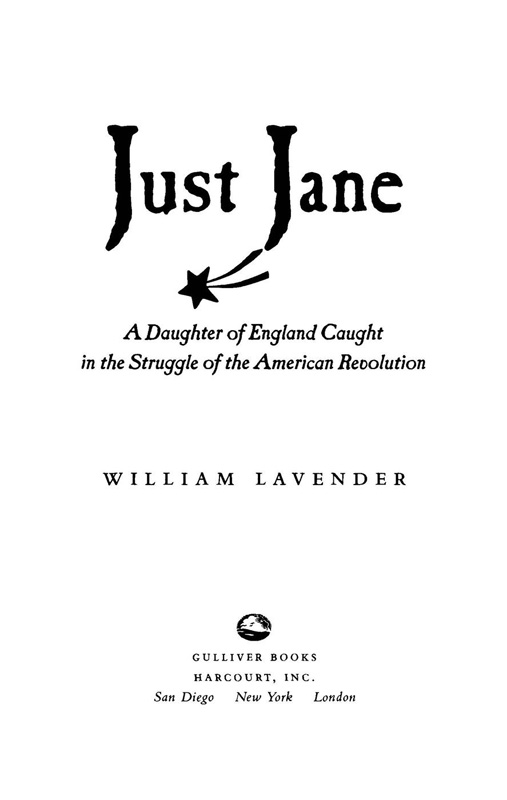 The Prentice Family of England and South Carolina

PART I
Point of No Returnâ1776

Gulliver Books
is a trademark of Harcourt, Inc., registered in the United States of America and/or other jurisdictions.

The Library of Congress has cataloged the print edition as follows:
Lavender, William.

To Mary and Debbieâtwo strong
right arms of support

The Prentice Family of England and South Carolina 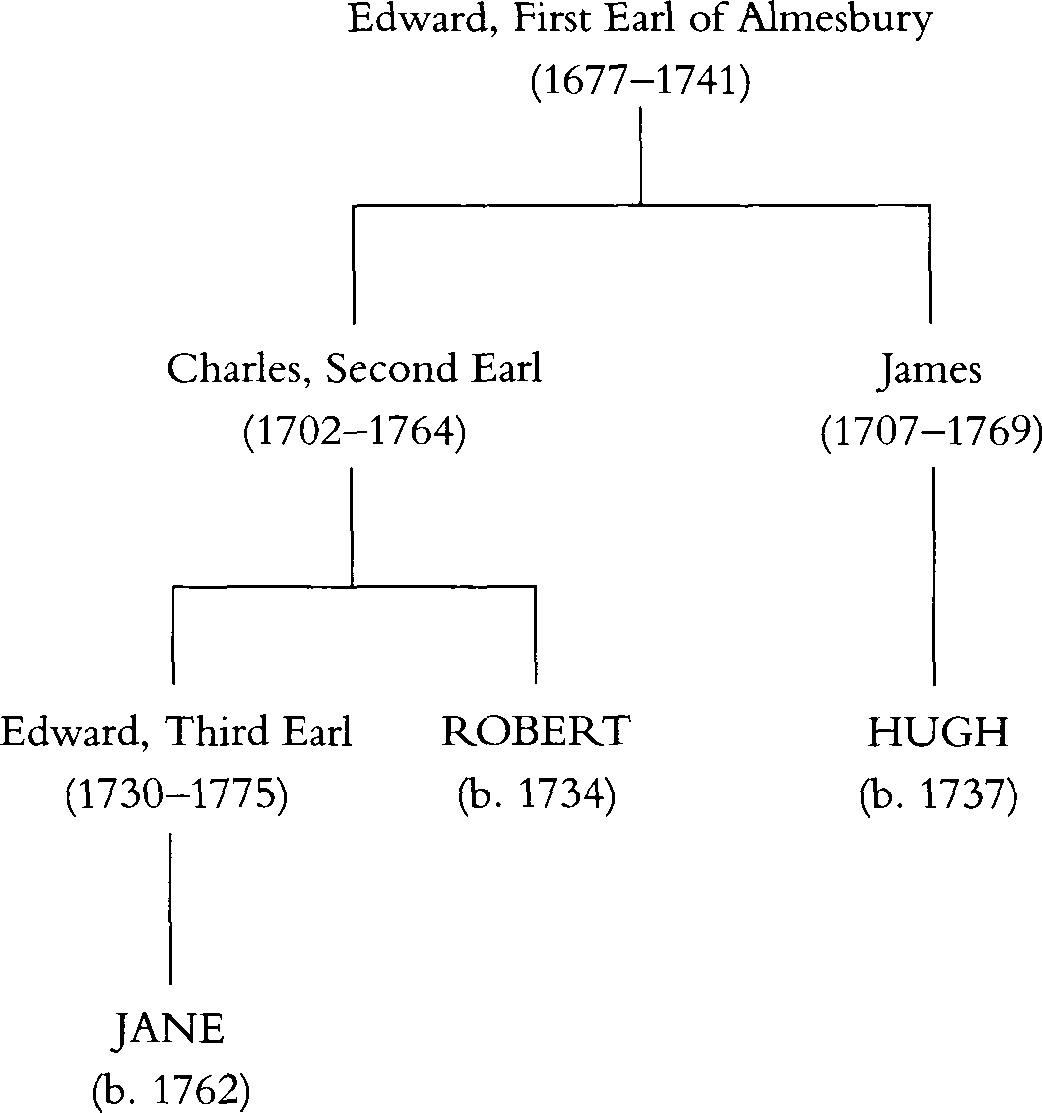 PART I
Point of No Returnâ1776
Chapter 1

Jane Prentice awoke with a start in the cramped, airless cabin that had been her world for forty-six days and nights. Always there was the endless motion, the creaking and rocking of the sailing ship surrounded only by ocean and horizon. A lantern, now dark, swung gently on a beam overhead, as Jane's elderly companion snored softly in the opposite bunk.

Suddenly from the crowded deck above, shouts rang out in the gray, cheerless dawn. Sailors starting their morning chores called to one another across the decks. According to the ship's rules, that meant Jane could go up, too. Shivering with a mixture of cold and excitement, she quickly dressed and ran up on deck to greet the new day.
Maybe
, Jane thoughtâas she had every morning for the last week
âjust maybe
, this
will be the day
.

Her stout, gray-haired companion found Jane leaning over the railing on the bow, looking straight into the spray-filled wind. She was straining to see a sliver of land through the mist.

“Mrs. Morley, look!” Jane was too excited for a scolding.

“Do you see? It's the Sea Islands, the lookout told me. Charlestown's
*
only three more hours' sail. That's South Carolina you're seeingâwe're finally here!”

Squinting into the distance, Mrs. Morley could barely see a dark line low on the horizon. “Lord above! Can it be?”

“A backwoods outpost, I dare say.” Her companion sniffed. “Like all the American colonies.”

“That can't be. Uncle Robert and Cousin Hugh have lived here for years. And Uncle Robert wrote to us that Charlestown's quite as civilized as London, only smaller.”

“Civilized, indeed! We'll be spending half of every year at Mr. Robert's farm, miles from town and surrounded by wild beasts and savages!”

“It's not a farm, it's a big plantation,” Jane corrected her.

“Besides, there's all this talk of quarreling between the Americans and King George, our lawful ruler. It worries me.”

But Jane's mind was on her uncle's plantation. “Rosewall!” She breathed the name as if enchanted. “Uncle Robert says it's a beautiful patch of England, transplanted to America. I'm sure it's lovely now, in June.”

“A tangled wilderness, I'll warrant.” Mrs. Morley was not to be influenced. She pulled her long overcoat tight against the chill, looking quite miserable.

Jane scowled. “If you already hate it, why did you come?”

“You know very well why,” Mrs. Morley replied indignantly. “Because I've been your companion since your dear mother died so long ago, and because I promised your poor father. What a wasted life he led! Earl of Almesbury at thirty-three, and his fortune and estate lost to drink before he was forty! It was his dying wish that I remain with you.”

“Well, I could have come alone,” Jane replied, absent-mindedly pulling at the small gold locket she always woreâand always tugged at when she felt nervous.

“A girl of fourteen sailing off alone to a strange land to live with an uncle she's never met? I think not!”

Jane gave her faithful companion a hug. “I'm glad you came, Mrs. Morley, but I want you to be glad, too. From his letters, Uncle Robert sounds wonderful, and I'm dying to meet Aunt Clarissa. He says she's very beautiful, and from a good Charlestown family. Her brother's a rich merchant and belongs to the South Carolina Assembly, or whatever it's called. And Cousin Hugh isâ”

“A cabinetmaker!” Mrs. Morley scoffed at the mention of Robert's cousin Hugh Prentice. “Imagine! No more than a lowly woodworker, and him with all that schooling. All the Prentice boys had a fine education, you know. Their grandfather, Edward, the first Earl, saw to that. He'd turn over in his grave if he knew that after Hugh came to America, he tossed aside his books for a hammer and chisel!”

“I don't see why. Surely, woodworking's an honest occupation.”

But Mrs. Morley had already turned to go back below-decks. “I tell you this, my girl,” she called over her shoulder, “we may be a long way from home, but I intend to remain English through and through till the day I die. These colonies can't change that. And stop pulling on that chain, dear. You'll break it for certain. You know I wasn't even supposed to let you have that locket until you turned eighteen.”

“I know, and I keep telling you, I won't break it.” Engraved with her parents' initials
âEP to RP
âJane's beloved gold locket contained her only memento of her mother, the Countess Rachel, who had died when Jane was just three years old. Curled inside the heart-shaped locket was a wisp of chestnut brown hair. The locket, and a slim volume of poems that had belonged to her father, were the two treasures she had brought with her to America.

“And I know how you feel about England, Mrs. Morley. I feel the same way. I'm sure all our friends and kinsmen in America do, too. But you'll seeâwe'll have an exciting new life here, and I'm .Â .Â .”

Jane turned her gaze again to the mysterious horizon shrouded in morning mist.

While Harriet Ainsley was often considered pretty, she looked plain in comparison to her husband's beautiful sister, Clarissa Prentice. But Harriet possessed an inner beauty that would last, everyone said, far longer than Clarissa's glamour. While the elegant Clarissa was widely admired, it was the warmhearted Harriet, with her sunny disposition, who was genuinely loved by all who knew her. Harriet was blessed in other ways as well. Her husband, Arthur, was a prosperous merchant, respected public figure, and devoted family man. Their handsome eighteen-year-old son, Brandon, was famous around Charlestown for his superb horsemanship. All in all, the Ainsley family was the picture of life at its very best.

Harriet's second-floor sitting room in the Ainsley house, on Church Street, opened onto a narrow covered veranda running the length of the house. Late on this warm June afternoon, her husband found her there enjoying the view of Charlestown Harbor from the floor-to-ceiling windows.

“She has, but she's completely exhausted. Nellie is showing her directly to her room.”

“Good. I thank heaven she's safe, what with all these rumors of British ships approaching.”

“Being a loyal British subject, she'd likely see no danger in that. She doesn't seem to know much about the quarrel between England and the colonies. And it's probably just as well.”

“Well, ignorance is bliss, the poet says. I hope she'll remain blissful as long as possible. What's she like, Arthur? Is she pretty?”

“I daresay she will be, once she's spruced up with some decent clothes. Slender, graceful, lovely complexion. Long brown hair. Huge dark eyes, like a frightened doe. But frightened or not, she's remarkably poised for one so young. I could tell she was disappointed that Robert wasn't at the dock to meet her. But I explained how busy he is at Rosewall in June, and that we'll do everything we can to make her comfortable until he arrives.”

“Of course.” Harriet became thoughtful. “I wonder if she'll expect to be called Lady Jane. After all, she
is
the daughter of an English earl.”

“I suppose we should, until she becomes accustomed to American ways. Soon enough she'll realize we don't much use titles of nobility.”

Just then Jane appeared in the doorway. “Come in, my dear,” said Arthur, with a kind smile. He introduced her formally: “Harriet, may I present Lady Jane Prentice.”

“Lady Jane! We're delighted you're here!” Beaming, Harriet embraced the girl. The warm hug and the sweet scent of the rose water Harriet wore took Jane's breath away for an instant. It was the same rose water her mother had worn, she was certain of it. Jane had only a few memories of her mother, and it was comforting to feel that Harriet was in some way like her.

“Thank you, Mrs. Ainsley.” It was nice to be so warmly received.

Harriet bubbled cheerily. “Now, dear, until Robert and Clarissa return to their house in Charlestown, please consider our home and our family as your own. Our son, Brandon, is also at Rosewall just now, but he returns soon. And we'd be so pleased if you'd call us Uncle Arthur and Aunt Harriet. Wouldn't we, Arthur?”