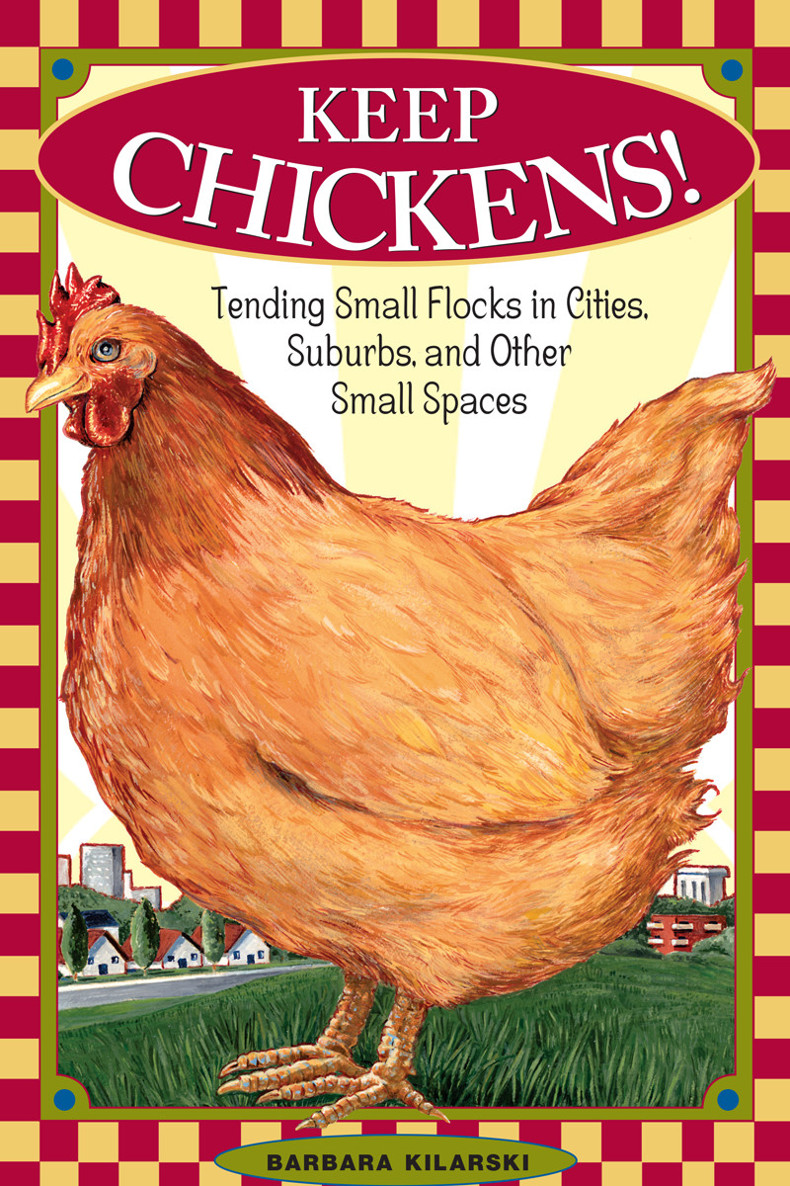 This book is dedicated to my human flock:
George and Yolanda, the best parents a chick could ask for, and my sister Annette, a chick’s best friend.

Chickens in the Garden

Chapter 4: Chickens and the Law

Courtesy First: Talk to Your Neighbors

What’s in a Coop?

To Roof or Not to Roof?

Building in Cold or Hot Climates

The Right Coop in the Right Place

Building a Coop for the Girls

Chapter 6: How to Pick a Chick

Good Breeds for a Backyard Flock

Where to Get Chicks

How to Pick Chicks

The Care of Little ’Uns

Quiche with Sausage and Asparagus

Epilogue: A Day in the Life of an Urban Chicken Keeper

Other Storey Titles You Will Enjoy

Special thanks to Kim Kittinger, whose perpetual and enthusiastic daydreaming made it possible for me to pursue my own dreams.

It is the Year of the Chicken. Whether prompted by a practical attraction to the daily fresh eggs or by a fanciful desire to import a little bit of country charm in our urban lives, over the past two years city and suburban households have adopted more chickens than ever. Seattle. Portland. Los Angeles. New York. City chickens are hatching in urban areas at break-egg speed.

Why the sudden population boom in town and country chickens? Perhaps because chickens hearken back to simpler times when most American households included chickens. A time when most of our daily foods were brought in from the backyard, not shipped over thousands of miles and dozens of days to our dinner plates. Keeping chickens gives people a chance to slow down and smell the flowers — flowers that grow larger and brighter each year when composted with homegrown chicken poop.

Chickens have awakened the carpenters and craftsmen apparently latent in modern civilization. City chickens don’t live in scrap wood shacks; they live in palatial hen habitats and estates built especially for them. Farmer wanna-bes in urban neighborhoods are investing considerable time and money in coop design and architecture. Maybe you can’t afford to custom build a Swiss chalet or log cabin–style home for your family, but you can build one for your chickens instead!

Raising chickens satisfies an intrinsic and basic human right to feed oneself. A right to grow some or all of your own food. Though my own hens are family pets, my family now depends on their eggs, which are a luscious addition to the vegetables and herbs grown nearly year-round in my kitchen garden. My partial self-sufficiency is a source of personal pride and an inspiration to my friends and family. My urban chickens are a symbol of my commitment to be more self-reliant. Though I still shop at the grocery store, I now try to feed my family more from the backyard than the supermarket. Don’t crack up; I feel empowered by “growing” my own eggs. So do many fellow chicken keepers.

I’ve lived in big cities and busy suburbs all my life. If I’d known all along that keeping a few hens in my backyard was not only legal but also fun and inspiring, I would have had chickens long ago. Now that I do know, I’ll never be henless again.

This book’s instructions for starting and maintaining a flock are distilled from my experience in raising hens in the city. They will also hold true for those of you who live in the suburbs, in small towns, or out in the country. If you worry that you’ll be the oddball chicken keeper on your block, rest assured that there are more chicken enthusiasts out there than you know. If articles that appeared over the last year in
House & Garden
and the
Wall Street Journal
are any indication of chickens’ rising popularity in urban neighborhoods, then the Power of Fowl is being realized. Forget the phoenix — chickens are rising!

Chickens in San Francisco, Boston, and Seattle? Why not? Chickens in the suburbs and bedroom communities of Saint Louis, San Diego, and Chicago? Most certainly. Keeping enough hens to provide a family with fresh eggs every day is not a new idea. But it is a novel idea in this day and time, riding on the wake of a growing trend toward increased quality of life and greater control over the little things in life — like the eggs we eat.

At any given moment, there are 10 billion chickens clucking around the world. Hens worldwide lay close to 700 billion eggs each year. Most chickens live on large commercial farms. A few live on small farms or rural homesteads. Fewer still live in cities, suburbs, and towns. But this is changing, in my own neighborhood and in neighborhoods across America, as more and more people are keeping small flocks of chickens tucked away in their city and town yards and gardens.

There are 10 billion chickens currently clucking around the world.

My decision to keep chickens — hens, actually — for eggs and amusement in my tiny Portland, Oregon, yard began with childhood reminiscences that inspired a landscaping project that evolved into a personal philosophy of self-reliance and sustenance and more control over the source of my fresh foods. All because of chickens? Sounds crazy, I know. But I’ve never felt saner. Those ubiquitous yet taken-for-granted chickens have changed my life, and I love them for it.

That’s right, I love my chickens! They are a part of my family just like any other loved and loving pet. Those of you who are not yet thrilled by the idea of chickens in your backyard deserve an explanation.

If ever there was an unlikely person to enjoy the company of chickens, it’s me. My exposure to chickens as I was growing up was minimal. Ironic, considering that my father grew up the son of a butcher on a farm in Poland, and my mother was raised on a farm in France. Despite my pro-chicken gene pool, I grew up instead to be a Total City Chick.

I was born and raised in Los Angeles, where “chicken” was the derogatory name for boys who wouldn’t fight in the schoolyard. In the “planned unit developments” where my family lived, I rarely saw live chickens, except at petting zoos and (for brief moments) at Chinatown meat markets. The only other time I saw chickens in any other state of being was at the dinner table, trussed, stuffed, and crusted golden brown. I never thought about chickens much unless deciding how I wanted mine cooked — fried, barbecued, sautéed, broiled, braised, stewed, or baked. Given chickens’ relentless versatility as a main course, years later I shouldn’t have been surprised that this selfless, utilitarian bird would be so adaptable to living in my modest urban backyard.