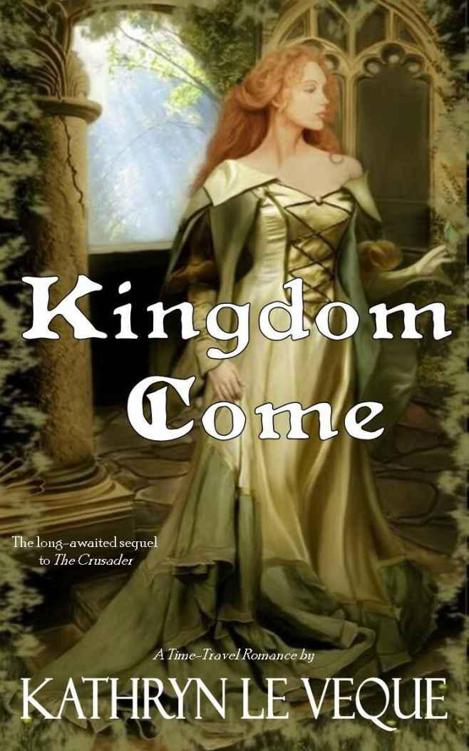 Copyright 2010 by Kathryn Le Veque
All rights reserved. No part of this book may be used or reproduced in any manner whatsoever without written permission, except in the case of brief quotations embodied in critical articles or reviews.
Printed by Dragonblade Publishing in the United States of America

Excerpt from the prequel, “The Crusader”

For the archaeologist and her resurrected knight, it was coming to an end.

It was difficult to see the road in the dead of night. The headlights of the jeep pierced the veil of darkness as Rory and Kieran sped south, away from the pursuing Land Rovers. To make matters worse, more clouds were gathering and the wind had picked up. Having spent more than a year in Nahariya, Rory knew a storm was approaching.

Kieran sat in the passenger seat, his left hand over his bandaged wound, taking a pounding as the vehicle lurched over rough road. Rory knew the area well and knew that she was putting more distance between Kieran and the small hospital in the city, torn between the need to seek medical attention and the panic to be free of Corbin.

Her first instinct was to head back into Nahariya for the hospital. But Kieran wouldn't hear of it, directing her quite firmly to return to Tel Aviv where they could catch a flight back to England. He would be fine, he insisted, once he was allowed to rest. But Rory didn't believe him and tears stung her eyes as she struggled to steer in the darkness. To come so far and then risk losing him to an eight hundred year old wound was almost more than she could bear.

Her apprehension was made worse as Corbin's fleet closed in on their old jeep with newer cars. Rory was doing an admirable job of driving over the bumpy road that wound its way around Nahariya and eventually ended up along the coast, but the pack of jackals was closing in and she knew she couldn't go much faster.

If she was bordering on panic, she never let on. In fact, she almost found herself wishing Corbin would catch up. At least then Kieran might agree to medical attention before the police locked them both up and threw away the key.

Twisting their way among the dusty, shadowed hills, they emerged onto a flat stretch of land and the weak glitter of the ocean could be seen in the distance. The clouds were thickening, the smell of rain pervasive and amidst her other troubles, Rory knew the wipers of the jeep didn't work. In the arid land of Israel, she had never given the broken blades much thought. But she was certainly thinking of them now. Lurching over a particularly bad bump, she gripped the old steering wheel too tightly and came away with a nasty blister.

The road sloped downward, heading for the Mediterranean. Corbin's cars were coming closer, like dogs nipping at her heel, and Rory spent a good deal of time watching the rear-view mirror as the bright lights advanced. She was so involved with the approaching high beams that Kieran's warm, damp hand on her thigh startled her.

"Sweetheart," he murmured. "Mayhap you should stop the car. I do not believe it wise to run any longer."

She turned to him, noting how terribly pale he was. In fact, he looked very much as he had when she had first seen him in the grave; pallid and pasty. Refusing to fight her terror down any longer, she couldn't help the anguish in her voice.

"Oh, Kieran," she moaned. "We've got to find you a doctor. To hell with Corbin and his henchmen!"

He shook his head feebly, his blood-stained hand on her leg. "Libby, I've been running from Simon for eight hundred years. Mayhap I was not meant to elude him. Mayhap I should simply succumb to the inevitable."

Simon.
The man who had been both enemy and friend to Kieran eight hundred years ago, the beast responsible for the horrific wound slowly draining Kieran’s life away. Simon, reborn as the man Rory knew as Corbin and who, even know, continued to chase Kieran. Redundant history, never ending animosity. Like a reincarnated guard dog, Simon would never stop.

He smiled, touching her cheek and leaving a crimson streak. "It will never end between us. You and I are a part of one another, in this time or any other. We have accomplished our task, and now we are finished. Mayhap it is time to allow history to fulfill its destiny."

She ran cold. "What does that mean?"

He sighed, the oozing wound draining his energy. "It means that eight hundred years ago, I defied death with the magic of an alchemist's potion. I cheated the natural course of life so that I could finish my sworn task. Now that I have returned to the land where the Crusades converged, mayhap death is attempting to claim me as it should have those centuries ago. The closer my enemy looms, the more my wound bleeds. I cannot believe it to be coincidence. The man was meant to kill me."

Rory wept softly, shaking her head. "You're not going to die," she whispered. "I won't let you. I'll get you far away from Corbin and we'll find a doctor who can heal you."

"There is no one who can heal me."

"Don't say that!" she slammed her hands against the steering wheel, almost losing control when it leapt over a series of harsh bumps. Gripping the steering column tightly, she wrestled for control in more ways than one. "Kieran, you're a part of me. We're incomplete without each other. If you die, I will too."

He touched her face again, his expression serious. Thick fingers wiped at the tears as she struggled to concentration on her driving.

"Oh, sweetheart," he murmured. "Time could not keep us apart. Certainly death cannot either. I shall be waiting for you when you cross the threshold of Paradise, have no doubt. We shall spend eternity together, you and I."

He leaned over, grunting with pain and exertion, and lay his head on her shoulder. "I will never leave you. I love you with all that I am, all that I will ever be. Know this to be true, for all time."

She tried to touch him but the road was too rough and she couldn't risk letting go of the steering wheel. They were nearing the beach now, far away from the city proper of Nahariya.

The mob of Land Rovers wasn't far behind, their headlights casting flickering light on the sloping landscape of the sea. Sobbing as Kieran weakly comforted her, Rory took a turn too sharply and the jeep nearly went over. Overcorrecting, she heard something snap and grind and the car suddenly came to a halt.

"Damn!" she screamed, beating at the steering wheel as if it would correct the problem. "Kieran, the car's busted. We can't...."

He smiled at her, so weakly, his gem-clear brown eyes filled with emotion. "I know we cannot run any longer. I am not meant to run any longer." When she started to weep again, he simply collected her hand, their meager possessions, and opened the door. "Come along. I would show you something."

She let him pull her from the car. The Land Rovers were just coming over the rise in the near distance as Kieran staggered across the sandy soil, heading for the ocean. His wound was bleeding profusely, trailing down his right leg and staining his boots. Rory sputtered and wept, following him, having no idea where they were going. But Kieran knew.

The clouds over head were beginning to rumble and a light rain fell as they neared the crashing, rocky shore. Behind them, the Land Rovers came to a halt and soldiers in fatigues spilled forth, followed by two men in suits.  Kieran and Rory ignored them, heading for an outcropping of rock overlooking the turbulent swells.

His voice was soft as he spoke, the clear brown gaze moving across the dark waters. "Eight hundred years ago I came ashore on a beach not dissimilar to this one," he grunted with strain as he mounted the rocks. "Thousands of men and horses bound for the Holy Land, intending to rid God's country of the Muslim insurgents. I was one of those men and I wore the banner of England proudly."

Rory held on to him tightly as they moved to the top of the outcropping, falling into his embrace as he sank to his knees. She was weeping so heavily she could hardly hear him, and he stroked her tenderly. His heart was aching for what he knew had to be.

"It was an awesome sight," he murmured, his cheek against the top of her head and as he focused on the rolling sea. "I came on the quest because I believed in my king, in my country, and I was determined to make both proud, and by accepting the mission that would eventually end my life, I knew there was nothing more worthwhile I could ever do with my mortal existence. At least, that is what I believed until I met you. You and I are incredibly similar, Libby. Each wrought with determination, each aching deeply to find fulfillment, and each willing to jeopardize our destiny for what we believe in."

Rory wept into his shirt as the rain grew heavier and the army of men drew closer. She could see their features now as they crossed the sand, singling out Corbin immediately. She watched as he held out his hand to the group, silently ordering them to wait as he continued forward. A bolt of lightning lit up the sky, illuminating his evil face, and Rory raised her head from Kieran's shoulder in fury.

Corbin came to a halt several yards away. "I've come a very, very long way for you, Dr. Osgrove. I won't leave without you. You’re in very big trouble for grave robbing, among other things."

She simply shook her head. "I'm staying with him."

Corbin shoved his hands into his pockets as the weather worsened. "You're both coming with me, I'm afraid. You've got a good deal of explaining to do."

Kieran heard him, the familiar voice of a man who had trailed him for centuries. But he ignored him for the moment, focused on the delicious warmth of Rory in his arms. Warmth, he suspected, he would not be experiencing much longer.

FULL MARKS FOR TRYING by BRIGID KEENAN
Act of Mercy by Peter Tremayne
Wine of the Gods 05: Spy Wars by Pam Uphoff
The Fall of Princes by Robert Goolrick
Night Squad by David Goodis
A Time to Slaughter by William W. Johnstone
HACKING THE BILLIONAIRE: Part 3 by Jenny Devall
Man of Destiny by Rose Burghley
The Lie Detectors by Ken Alder
14 BOOK 2 by J.T. Ellison
Our partner