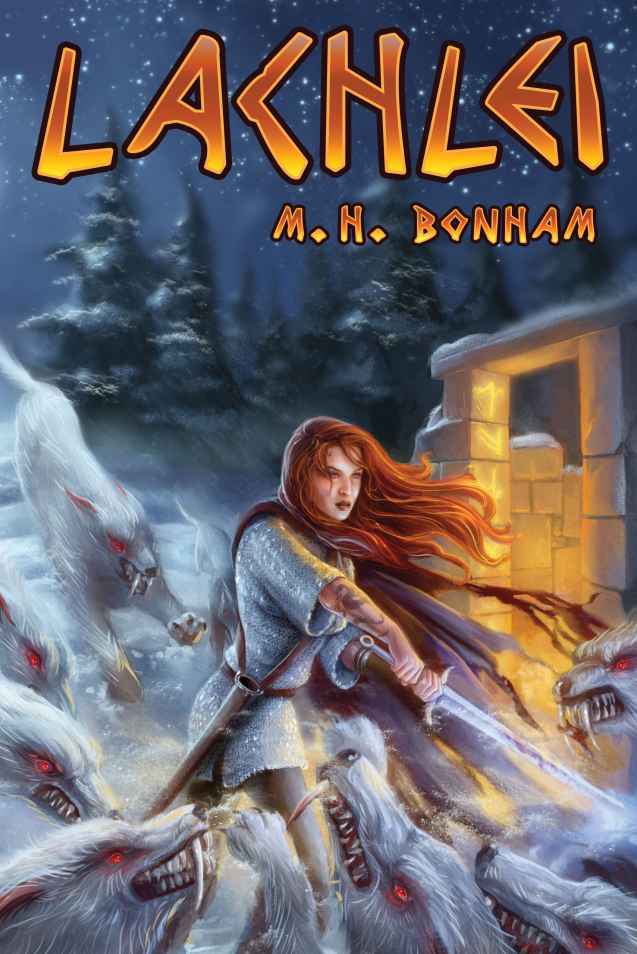 Two thousand years after the world's total destruction, Areyn Sehduk, the god of death, has returned to rekindle the war. Appearing as a warrior from a rival clan, Areyn slays the king of the Lochvaur, knowing that he can shift the balance in the world of mortals.

But the king's death brings an unlikely adversary. Lachlei, the queen of the Lochvaur, proves to be a daunting warrior. Swearing vengeance against the rival clan, Lachlei thrusts her people into a deadly war against demons and undead.

All rights reserved. Reproduction or utilization of this work in any form, by any means now known or hereinafter invented, including, but not limited to, xerography, photocopying and recording, and in any known storage and retrieval system, is forbidden without permission from the copyright holder.

To Larry, as always.

I want to thank to following people for their help on
Lachlei
(in no particular order):

The good folks at Yard Dog Press (www.yarddogpress.com) who introduced fans to this world. If you’re interested in other stories, check out my other books,
Prophecy of Swords
and
Runestone of Teiwas
, which are in the same universe. A huge thanks to Selina Rosen and Lynn Stranathan. Thanks to Lynn for edits.

My thanks to Gwen Gades, publisher at Dragon Moon Press, for taking this book on.

Thanks to the guys at Podiobooks.com, the coolest bunch of people around. Especially to Evo Terra for giving me another way to promote. Listen to their books. Thanks to Tee Morris, who actually inspired me to submit to Dragon Moon Press.

A huge thanks to Laura Diehl, for the awesome cover.

The world was gone.

Rhyn’athel, the god of warriors stood on the charred mound that was once a towering peak within the Shadow Mountains. Nothing but burnt and smoldering ruins and corpses filled the land to the glowing red horizon and beyond. The acrid smell of burning flesh and death reached his nostrils. To a mortal, the stench would have been overwhelming.

But there were no mortals. There was nothing living now. All the races were gone along with the green fields, the majestic forests of pine, oak, and elm, the streams, the rivers, the mountains and the valleys. All laid waste in one single battle.

Rhyn’athel doubted anything could have survived the torrent of flames and the massive destruction that followed. He sheathed his sword,
Teiwaz
, in anger and pulled off his helm and mail coif, revealing the red mane streaked with gold.

Such waste! The gods of light would have to begin again.

Rhyn’athel was a tall god, but he could see no further than perhaps a mile. The thick clouds of smoke were too dense and piles of burning corpses too tall to see beyond. His silver eyes scanned the battlefield.

He caught movement and drew
Teiwaz
once again. Had the demon god returned? What could Areyn Sehduk, the god of death, want with this world now? Areyn had razed the world with the
Fyr
, the Eternal Fire, and nothing could stand in its way.

Teiwaz
, the Sword of Power, glowed a menacing blue-white against the blood-red sky. Rhyn’athel relaxed when he saw the movement was a silver wolf padding through the piles of ashes and charred remains.

The wolf transformed into a god wearing mail. He was shorter than Rhyn’athel, with a wolf-gray mane and brass-colored eyes. Still, the familial resemblance remained. “Brother,” he greeted the warrior god. “Where is Areyn Sehduk?”

“Back in the world of the dead, I hope,” Rhyn’athel replied. “What of the other worlds?”

“Much the same as this,” Ni’yah said. “Except our own world,
Athelren
. The other gods and goddesses were able to hold off the Eternal Fire to protect the Hall of the Gods.”

Rhyn’athel shook his head. “Then the
Eleion
…”

Rhyn’athel stared. “Why do you smile? Areyn destroyed everything! Everything!”

“Not completely, my brother.”

“You don’t think I would let the
Eleion
perish, do you?” Ni’yah asked. “They were, after all, my idea.”

Ni’yah shook his head. “I couldn’t save all. But it’s enough to return the
Eleion
and the
Ansgar
races to this world. There’s enough of each of the Nine Kindreds. But yes, your son, Lochvaur, is alive.”

“You brought them to
Athelren
—
to the Hall of the Gods?”

“It was the safest place — considering there were no safe places,” Ni’yah said. “So, what did you get out of Areyn?”

Ni’yah frowned. “Next time, have me negotiate. We won, my brother
—
we should’ve gotten the majority.”

“I tried
—
but even with
Teiwaz
run through him and pinned to the World Tree, Areyn wouldn’t concede his four,” Rhyn’athel said. “And this world, the fifth world, can’t be touched by either side until the end of time. It’s neutral ground.”

“What of the
Eleion
and
Ansgar
?”

“This will be their world now.”

“No bargain,” Ni’yah said. “The
Jotunn
and demons can still walk these worlds
—
they’ll decimate our people.”

“I didn’t agree to this,” Ni’yah said, crossing his arms.

Rhyn’athel glared at his brother. “You dare defy me?”

“Yes,” Ni’yah said. “This is foolish
—
you brokered no peace, brother, you simply delayed the inevitable.”

“And what would you do?” Rhyn’athel demanded. “Areyn can’t be destroyed anymore than you or I. Without a reasonable offer, Areyn has no motivation to keep the truce and then, we are back to this.” He waved a gauntleted hand at the desolation.

Ni’yah shook his head and said nothing. His brass eyes hardened as he gazed at the destroyed world. “What Areyn did is unforgivable.”

“What would you have done?”

A silence ensued. At last, Ni’yah nodded. “I would’ve brokered peace the best I could,” he admitted.

“Which I have done,” Rhyn’athel replied. He gripped his brother’s arm affectionately. “I know it’s a delay, but what else can I do?”

The air smelled of death.

Areyn Sehduk watched the small band of warriors ride towards him. The death god smiled as their horses skittered nervously to an uneasy stop. He had chosen to wait here for them
—
here along the King’s Highway
—
amid the fir trees and dark pines under a moonless night. Few traveled this stretch of road that wound from the North Marches to the city fortress Caer Lochvaren. They weren’t far from the
Silren’s
border
—
no doubt the
Silren
would take the blame for what Areyn Sehduk was about to do. That suited the death god just fine.

There were five in all. They were none other than
Chi’lan
warriors
—
men sworn to serve Areyn Sehduk’s enemy, Rhyn’athel,. They wore red and gold, the colors of Rhyn’athel. The colors of the
Lochvaur
kindred.

The colors of the enemy.

One warrior rode forward. He was handsome with a lean, muscular build and a flowing red mane streaked with gold, typical for the
Lochvaur
. He wore a gold circlet on his brow, denoting his rank. His piercing silver eyes met the death god’s gaze.

This one is Fialan,
the god thought.

“Who are you?” Fialan demanded. “Why do you seek to waylay us?” He drew his sword.

Areyn Sehduk laughed. Even in his mortal guise, the laugh grated on Areyn’s ears. The body he took was of a tall, lanky
Silren
with a long, white mane and ice-blue eyes. It fit him well, although he preferred the dark hair and eyes of the
Eltar
. His mail was dark, but he wore the traditional colors of the
Silren
: a silver eight-rayed star adorned his blue surcoat. “I will waylay whomever I please.”

“I know who you are, Fialan,” Areyn replied coldly. “Your precious titles mean nothing to me.”

At that, the other four
Chi’lan
drew their swords.
Not that it mattered,
Areyn thought. With a single glance, all four horses and riders fell over dead. The horses screamed and thrashed, bloody foam spewing from their nostrils as they collapsed. The men screamed once before collapsing with their horses. Their swords clattered uselessly to the ground.

Fialan stared at the dead men and then back at Areyn Sehduk. Fear crept into Fialan’s eyes for a brief instant, but the
Lochvaur
king steeled his gaze, much to his credit. “By Rhyn’athel’s sword, who are you? What manner of wizardry is this?”

Areyn Sehduk grinned.
This would be great sport.
“Why don’t you come down from your horse and find out,
King
?” he taunted, drawing his dark blade.

There was no hesitation now. Fialan dismounted, drawing his adamantine blade. Areyn had seen the look in the king’s eyes before many times. Fialan showed no fear, but it mattered not. It was still the look of a dead man.

They broke off and circled.

“Who are you?” Fialan demanded. “Silvain and my father signed a treaty nearly a hundred years ago. The
Silren
and the
Lochvaur
are at peace…”

Areyn chuckled. “No longer, it would appear…”

Fialan attacked now, swinging the long sword. Areyn slid to the side and parried, but too late — Fialan’s blade sliced through Areyn’s armor into flesh. Pain shot through Areyn, but he ignored it. Instead, the death god laughed.

Fialan stared. Blood poured from the
Silren’s
chest as Fialan pulled his long sword away. The blow would be a mortal wound to any
Eleion
—
even to a first-blood, those born with gods’ blood in them.

“What are you?” Fialan demanded. “Demon?” Sweat dripped from his brow, and Areyn knew Fialan was afraid.

Areyn grinned. “I am your death,” he replied. “I grow weary of this game.”

With that, an invisible force ripped Fialan’s sword from his hands. Areyn Sehduk approached, and Fialan found he could not move; some infernal power rooted him to the ground. Fialan could do nothing but watch helplessly as the death god, almost lazily, plunged the sword into his chest.

Fialan collapsed, writhing in pain for a moment before lying still. His silver eyes stared unblinking into the dark sky. Areyn chuckled. “I suppose it is some consolation to know that you would’ve won,” he remarked. He pulled the dark blade from the dead king and gazed at the blood as it rolled down its edge. “But no mere mortal will defeat me.”

Areyn Sehduk turned and for a moment saw movement in the dark forest. Ice-blue eyes scanned the silent pines and caught a glimpse of a wolf padding away. He turned back to the dead king and grinned. “And now, the fun begins.”

The wolf waited until the death god had passed. It watched as Areyn Sehduk turned and walked northward along the King’s Highway. Then, it slowly crept from its hiding place to survey the damage.

It was a large beast
—
nearly twice the size of a normal wolf  — with black-tipped agouti fur. It padded around the bodies of the dead
Chi’lan
and then halted as it stood before Fialan, gazing with his brass-colored eyes at the dead king.

“A terrible loss,” the wolf said to no one in particular. He turned and disappeared into the forest.

Lethal by Sandra Brown
Code Orange by Caroline M. Cooney
La voz de los muertos by Orson Scott Card
Eavesdropping by Locke, John L.
CodenameAutumn by Aubrey Ross
The Ball Hogs by Rich Wallace
From Lies by Ann Anderson
How To Get Your Heart Broken by Rose Fall
Bind and Keep Me, Book 2 by Cari Silverwood
On the Road Bike by Ned Boulting
Our partner