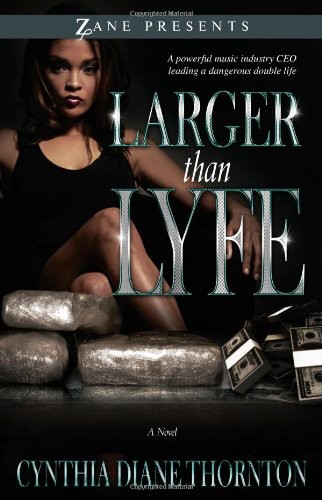 Thank you for purchasing this book, a Strebor Books title that I believe will engage, entertain, and excite you as a reader.
Larger Than Lyfe
by Cynthia Thornton is a fictional account of Keshari Mitchell, a young lady determined to obtain fortune and fame at any cost…and there is always a cost. Love can make you do unimaginable things and the right words can convince you to toss aside your beliefs, ethics, and morals to please another. Such is the case with Keshari. Once she realizes that she is in way over her head, she attempts to alter the parameters of a game that she never should have
agreed to play in the first place. Droves of women are behind bars today after realizing that the stakes of love were way too high.

Cynthia Thornton has a wonderful literary career ahead of her and I am proud to present
Larger Than Lyfe
to my dedicated supporters.

Thanks for supporting all of the Strebor Books authors. To find me on the web, please go to
www.eroticanoir.com
or join my online social network,
www.planetzane.org

All rights reserved. No part of this book may be reproduced in any form or by any means whatsoever. For information address Strebor Books, P.O. Box 6505, Largo, MD 20792.

I love you infinitely, eternally, my 6’2” babies.

My primary goal for this novel, from the very beginning, was ENTERTAINMENT. My mission is to provide to readers with what so many of us LOVE…the gangster’s story…because there are millions of us who are absolutely mesmerized by the danger, the intricate schemes, the unbelievable sums of money, the power, the corruption, the sex, and the bloodshed that are always associated with gangsters.

In every major city in America and in a few, not-so-major cities as well, a gangster’s story exists. The gangster’s story and his (or her) organized criminal affiliations and activities are as much a part of the fabric of this country as the dead presidents depicted on the currency that we exchange. Two, relatively new genres in the publishing industry called “street lit” and “true crime” were created to feed the fascination of those of us who love the gangster’s story and a whole smorgasbord of authors in these two genres relish in feeding us what we love, from Nikki Turner’s
Riding Dirty on I-95
to Mario Puzo’s classic,
The Godfather,
to Teri Woods’s series,
True to the Game
.

Scarface, The Godfather, The Sopranos, GoodFellas, Belly, American Gangster
,
State Property
, and
Casino
are all well-known and highly successful films. The film industry has probably been the most successful at providing us with vivid, mostly fictionalized depictions of the gangster’s story.

A multibillion-dollar, money-making enterprise has been created using every available form of media, from music to books to movies to video games, to feed the overwhelming fascination that so many of us have for the gangster story. We all know that what these people do is unbelievably, heinously wrong, but, just like watching the aftermath of a horrific car crash, we cannot s
eem to stop watching, reading and wanting to know more, as much as we can about what gangsters do, how they live, who they are.

Once I’ve fully engaged my readers’ attention with sex, humor, drama, danger and luxe lifestyles and landscapes transpiring in the lives of some of America’s rich, famous and infamous, my mission is always to drop some knowledge, to educate, to give readers mental “food” to turn over in their minds. My desire is to provide readers with some truth, facts, provocative topics for more serious and substantive discussions and debates and, quite possibly, progressive action once they’ve finished reading my book. For example: some of the most ruthless and most intriguing gangsters of all are members o
f our own government, past and current. Powerful figures who are connected, well-connected, and very well-connected in American politics have closely protected their own dirty, little secrets of direct involvement in organized crime—from the Iran-Contra scandal to Halliburton to the alleged affiliations of “Camelot’s” patriarch, Joe Kennedy, to what is taking place in the Middle Eastern areas of Iraq and Afghanistan right now. There is enough material throughout the history of the United States and American government that
exposes ruthless,
deceptive, and completely illegal financial schemes and enterprises committed by powerful political figures or powerful men with powerful political connections to make blockbuster, gangster page-turners for years to come. You see,
real gangsters do more than run drug rings, racketeering and prostitution operations in the seedy underbellies of major cities. Real gangsters have the power to affect the policies that directly affect YOU and ME.

Enjoy
Larger Than Lyfe
. There is definitely more to come.

M
isha had given Keshari all of the fucking space that she intended to give to her. Enough was e-goddamned-nough. Misha knew tha
t Keshari had been going through a lot over the past few weeks. Nix that. The past year had been a long one for Keshari. Keshari had some major, life-altering decisions to make. She had a mountain of demands to shoulder from one day to the next and it was a wonder that she hadn’t burnt out or collapsed from stress and exhaustion a long time ago. She kept so much bottled up inside herself. Misha was closer to Keshari and knew her better than anybody else, but even she often glimpsed that solemn, distant look in her best friend’s eyes and said to herself, “She’s right here in front of me, yet she’
s so, so damned far away…like she’s all alone in the world. I wonder what she’s thinking about because I know she’ll never tell me.”

The last time that the two of them spoke, Keshari had told Misha that she was going to take a bit of time to herself to try and get her head together. She started working from home. She was taking very few, if any, calls. She wasn’t accepting any visitors either. For the past week, Misha had called Keshari’s house more times than she could count and, although Keshari’s damned housekeeper could barely speak English, she could definitely crank out that “Mees Mitchell es unavailable,” and then promptly hang up.

That morning, however, Misha had firmly decided to bypass the futile phone calls. She was going straight to Keshari’s house
and she was NOT leaving until she saw Keshari, made sure that her best friend was okay, and gave her a piece of her mind. If Keshari dedicated more time to her personal needs on a regular basis instead of putting everything she had into work, Misha planned to tell Keshari, she wouldn’t be all holed up in that big ass house like she was Howard fucking Hughes! She knew that there was so much more to Keshari’s situation than a constantly gargantuan workload, but she didn’t even know how to begin to touch upon those things. So Misha would do what she had always done with Keshari. She would
scold Keshari in the way that best girlfriends often did, in the trademark fashion that only Misha could do; she would act as if Keshari’s situation was almost a normal one, with a solution as simple as Keshari “taking personal time for herself, chilling out, and getting some rest.” Then she would end her admonishments by letting Keshari know that she loved her and that she would always be there for her in whatever way that she needed her to be…for ANYTHING. Keshari would come through her current situation just as she had courageously, miraculously come through so much else.

A Changed Man (Altered Book 1) by Unknown
Taking a Chance by KC Ann Wright
Lauri Robinson by Testing the Lawman's Honor
Mark McGuinness - Resilience: Facing Down Rejection by Mark McGuinness
The Jackdaw by Luke Delaney
Making Wolf by Tade Thompson
One Corpse Too Many by Ellis Peters
Northern Proposals by Julia P. Lynde
Origins: The Reich by Mark Henrikson
The Flame and the Flower by Kathleen E. Woodiwiss
Our partner