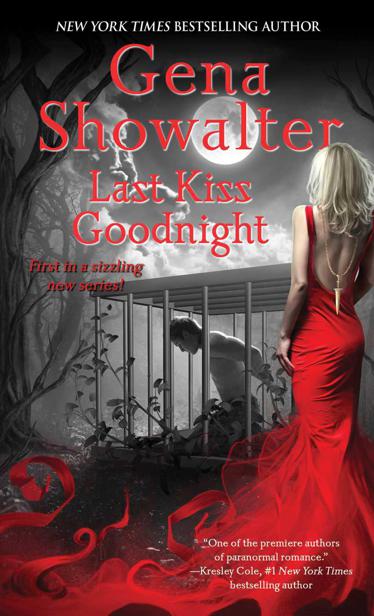 “A literal taste of rapture.”

“A glued-to-your-seat kind of book. Pick it up and you won’t want to put it down. The action is hot and fast-paced. . . . Showalter is a master of creating unique, fun, and super-sexy characters. The banter between Victor and Ava will stick with you days after you’re done reading.”

“Imaginative and sexy, this story teems with nonstop action!”

“[A] compelling and entertaining story of lust, deception, intrigue. . . .”

“Hot, hard-hitting science fiction romance. . . . I’m so glad she took the characters to their sensual and emotional limits—and beyond!”

“A heady mixture of speculative fiction, romance, and chick lit.”

MORE PRAISE FOR THE NOVELS
OF GENA SHOWALTER

“Showalter at her finest.”

First, to God, who picked me up out of a very dark place, ushered in the light, and inspired me on every level.

To my darling Jill Monroe, for reading the first draft and offering invaluable advice.

To my bold, beautiful editor, Lauren McKenna, who isn’t afraid to tell it like it is. You are gold!

To my sister, Christy James, for pointing me in the right direction.

To Roxanne St. Claire, for the encouragement, the phone calls, and the e-mails.

To my Wednesday night girls (and sometimes Saturday night girls). You know who you are, and I hope you also know you are so, so dear to me. Thank you for the prayers, the support, and the sharing of the truth.

F
OURTEEN-YEAR-OLD VIKTORIJA LUKAS RACED
between the circus tents, her throat and lungs burning as she gasped for breath. Though it was well past two in the morning, many of the performers were outside talking, drinking, and laughing raucously around blazing fire pits, celebrating their last night in a prosperous town.

The closer Vika drew to her destination, the more the scent of animal permeated her every inhalation. It was a scent she’d come to adore. A scent her father wanted to forever take away from her.

He planned to sell her babies—in pieces.

Righty, the gorilla with a penchant for stealing necklaces and bracelets. Angie, the horse too shy to look anyone but Vika in the eye. Gabbie, the prancing camel. Gus, the zebra who often hid behind objects too small to cover him. Dobi, the overly excited tiger she had caught peeing in all kinds of inappropriate places. Barney, the food-poaching llama, who was, needless to say, obese. Sammie, the obsessive-compulsive ostrich
now missing several patches of feathers. Mini, the sweetly sensitive elephant who cried at the slightest raise in Vika’s voice. Zoey, the sugar-addicted bear.

And then there was One Day, the brave lion Vika loved above all others.

“Those mangy creatures cost too much money to keep,” her father had grumbled only this morning. To him, that was a good enough reason to kill them, but she’d cried and begged, willing to say anything to save them, and so the litany had continued. “They take up too much space. They’re too old, too feeble, and they no longer cause people to gape with awe and wonder. They fill people with pity and disgust.”

Her father hadn’t cared that each animal was beautiful to Vika, faults and all. He hadn’t cared that One Day and the others were her only friends, the only solace she’d found since her mother’s death and the loss of her childhood playmates two years ago. Jecis Lukas owned Cirque de Monstres, and he cared only about profit.

And profit now demanded he make room for a new menagerie—one that would showcase
people
. Otherworlders, to be exact, males and females from different planets, whose families had come to earth almost a hundred years ago to enjoy protected, peaceful lives.

Sadly, there had been nothing protected or peaceful about their earthly “welcome.” Worldwide war had broken out, nearly destroying
this
planet. And even though a truce had been reached eventually, allowing otherworlders to live alongside humans, the innumerable races were still an oddity. Some were strange
colors, some abnormally shaped. Some had powers beyond imagining. Humans
would
pay to view and scoff at them, especially in the dark, seedy recesses of a place like this.

“Anything goes if the price is right,” Jecis liked to say.

What had happened to the man he used to be? The one who had carried her on his shoulders and tickled her feet? Wait. She already knew the answer. Greed had killed him.

Killed—like her babies would be if she failed to free them.

By the time Vika reached the cages, her blood flowed white-hot in her veins. A fine sheen of perspiration glossed over her skin, and tremors rocked down her spine, vibrating into her arms and legs.

So happy to see her, each of the animals erupted into beautiful song.

“Shhh. Be quiet, my darlings.” She reached out to unlock One Day’s door but dropped the ring of keys. Frantically she patted at the dirt. As dark as the metal was, and as little light as there was in the area, she couldn’t see—there!

Thank the Lord! She straightened and carefully inserted the key.
Click
.

“Vika!” Her father’s shout cut through the distance.

One Day roared in protest, firing up the rest of the animals. In seconds, the tone of their cries changed from joyous to frenzied.

“
Pleeease,
be quiet,” she whispered fiercely.

Of course, the soundtrack continued to play.

Not a single creature liked Jecis. They feared and despised him, and with good reason. He treated them poorly, was always spitting on them, yelling at them, and poking at them with electric rods.

Vika had protested the abuse—once. It was a mistake she’d never made again.

Hinges squeaked as she opened the cage door, and her gaze fused with the dark, feverish eyes of her best friend. His mane of golden hair was tangled, twigs and dirt clumped in several of the strands. Despite the fact that she always gave him portions of her own meals, he was so thin she could see every indention of his ribs. There was an oozing sore on his left paw, still festering despite the salve she’d applied every morning, afternoon and evening for the past few weeks.

“Finally, the day I told you about has arrived,” she said in pristine English. As an emigrant from New Lithuania, she’d had to steadily whittle away at her accent to fit the new identity her father had bought for her, to save her from being deported. Jecis had been her tutor, and his reward-and-punishment system had ensured quick success.

Sprout Mask Replica by Robert Rankin
Jane and His Lordship's Legacy by Stephanie Barron
Is She for Real? by P.J. Night
Rex Stout by The President Vanishes
ProvokeMe by Cari Quinn
The Color of Paradox by A.M. Dellamonica
Among Strange Victims by Daniel Saldaña París
Gunpowder God by John F. Carr
An Object of Beauty: A Novel by STEVE MARTIN
Kaaterskill Falls by Allegra Goodman
Our partner