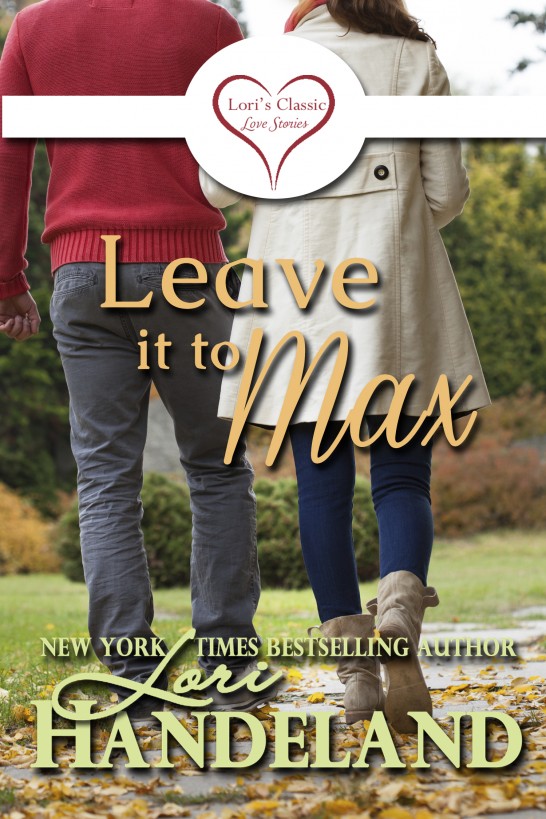 Leave it to Max

By payment of required fees, you have been granted
the
non
-exclusive,
non
-transferable right to access
and read the text of this eBook. No part of this text may be
reproduced, transmitted, downloaded, decompiled, reverse
engineered, or stored in or introduced into any information storage
and retrieval system, in any form or by any means, whether
electronic or mechanical, now known or hereinafter invented without
the express written permission of copyright owner.

This is a work of fiction. Names, characters, places,
and incidents either are the product of the author’s imagination or
are used fictitiously, and any resemblance to actual persons,
living or dead, business establishments, events or locales is
entirely coincidental.

The reverse engineering, uploading, and/or
distributing of this eBook via the internet or via any other means
without the permission of the copyright owner is illegal and
punishable by law. Please purchase only authorized electronic
editions, and do not participate in or encourage electronic piracy
of copyrighted materials. Your support of the author’s rights is
appreciated.

All rights reserved under International and
Pan-American Copyright Conventions.

Excerpt:
Out of Her
League

A few years ago I visited Savannah, Georgia,
and fell in love. The city is both the most beautiful and the most
haunted place I have ever known.

When it came time to work on an idea for my
next novel, I knew I had to go back to Savannah, if only in my
mind.

The moment I sat down at the computer,
eight-year-old Max Frasier walked onto the page. The inspiration
for him must have come from the little boy who once lived at my
house; he also had an imagination that just wouldn’t quit. We
called him "no fear boy" and hoped with every new year that the
months to come would be E.R. free. Like Max, while physically
fearless, he could imagine some pretty fearsome things.

For Max, anything is possible—especially in
Savannah, where the trees whisper, the river mumbles and ghosts
have been known to walk. Wherever Max goes, trouble follows.
Luckily for Max, there are a lot of people who look out for him.
His Gramma Rosie, a ghost-walk tour guide, his mother, Livy, a
lawyer in a town that has little use for them, and his new friend
Garrett, a horror writer who turns out to be a whole lot more than
Max ever dreamed possible.

“Savannah is more than a city, it’s a state of
mind.”

Night descended upon Savannah like the wings
of a great black bat. Cool air wafted along the ancient city
streets. Dawn would not tint the river for hours upon hours.

Max Frasier should not be out at night He was
only eight and his mom would have a hissy. But when his best and
only friend, Sammy Sontag, pulled him aside after school and
whispered, “There’s a vampire livin’ in the old Alexander place.
Wanna go see?” he’d agreed before he’d remembered that vampires
only appear at night.

By then he could not back out. A lot of kids
thought him a wussy already, on account of he was little, skinny
and scared of a lot. Max didn’t much like the dark. He’d always
been spooked by closets and basements and such. He couldn’t even go
in the bathroom without opening the shower curtain, as well as
every door and drawer in the place. Drove his mom nuts, but he
couldn’t stop. Who knew what lay in wait within those shadowy
compartments? The one time he didn’t look would be the last time he
needed to.

Those were the rules of his world. Under the
bed lived awful things. In closets lurked monsters
unimaginable.

And in the dark? Anything could happen.

Max inched up next to his friend. “For
what?”

They skulked behind some low bushes, just
like the bad guys always did in his dreams. Max had a lot of
dreams—sometimes even when he was asleep. He shivered as cool
fingers drifted along his neck. But when he turned, no one was
there. No one ever was.

His Gramma Rosie, though she refused to
answer if he used the word
Gramma,
said Max was sensitive.
Max figured that was a nice, adult way to say wussy. Still, Rosie
always understood when he was afraid. His mom just looked
concerned—as if
she’d
done something wrong. Moms were like
that, Rosie said, especially moms like his.

“You’ll see for what,” Sammy answered. “As
soon as the sun goes all the way down, a light will go on upstairs,
and he’ll come outside.”

“Just ’cause he likes to come out in the dark
don’t make him a vampire,” Max pointed out.

“Guess not. But no one’s ever seen him during
the day.
Ever.
He has all sorts of stuff delivered. At
night. No one knows his name. He hasn’t come over to meet the
neighbors, like a gentleman should.”

“What about the coffin?”

Sammy slid him a sly look. “The one the
movers took in the house. I was watchin’ and I saw
everything—furniture, boxes, coffin. No people but the movin’ guys.
’Cause it was daytime, see?”

Max saw. The other weird thing about Max was
that even though he was scared of things that went bump in the
night, they also fascinated him. He liked nothin’ better than a
good scary story or a creepy old movie. Which made no sense—but
what did in this world?

His grampa had died jumping out of an
airplane. Max had no idea why you’d want to jump out of a perfectly
good plane. It had been a bad idea for Grampa, anyway.

His gramma was a fruitcake, or so most of
Savannah said because Rosie liked to stand up for people and
animals that had no one else to stand up for them. It didn’t matter
to her if snails were slimy or fish had cold blood or ghosts often
disappeared before sayin’ thank-you. To Rosie what was right was
right, what was wrong stunk, and she knew the difference better
than anyone.

But Savannah was used to odd characters. Like
Viola and Violet, the elderly twin sisters who kept a trained goose
in their backyard—something that drove Rosie bonkers and had
started a running feud between her and the sisters. Or the man who
continued to walk a dog years after it had died, and the lady who
wore clothes dating from the War of Northern Aggression so the
ghosts in her parlor wouldn’t know that they were dead. With all
those characters, and then some, wandering Savannah, the folks who
called Rosie a “fruitcake” did so with a fond smile.

They never said “lawyer” that way, though his
mom insisted she was the kind of lawyer who helped people. Savannah
had never taken much to lawyers. In the oldest, olden days lawyers
hadn’t even been allowed in the Colony of Georgia.

The thing that made the least sense of all to
Max was how his dad had died before Max was born, and Mom still
seemed awful mad about it—so mad she never mentioned his name but
once. Heck, Max wouldn’t even know his dad was named James unless
he’d asked a hundred thousand times.

Maybe she was mad because Dad had died before
they could get married, which explained why Max, his mom and his
gramma all had the same last name. Though, no one else seemed to
care, so why should she?

“There,” Sammy said, and Max jumped.

A light came on upstairs. The Alexander place
was a monstrous house built on one of the outer squares of old
Savannah. The place had been empty for a long time—no one had been
able to afford the high price. Until now.

“You know vampires live forever, so they have
lots of time to make money,” Sammy whispered. “He probably has
houses like this all over the world.”

“So he can run to another safe place when the
mob comes to stake him.”

Max couldn’t imagine the laid-back folk of
Savannah getting riled about much of anything—least of all a
vampire. They were kind of a live-and-let-live—or maybe die—sort of
crowd. But then, you never knew. Look what had happened to Count
Dracula in every single movie.

The front door of the mansion creaked open.
Max shivered at the sound, straight from one of those movies he’d
been thinking on. Someone appeared on the porch.

At first all Max could see was a tall
outline. Then the street lamps flared to life, and the man
flinched, putting his hand up to shade his eyes. When he dropped
his arm, the silver glare slanted across the porch.

His dark hair brushed the shoulders of his
black shirt, and his skin glowed pale beneath the wash of
shimmering light. The man breathed deeply, as if he couldn’t get
enough of the fresh river air, then stretched his arms upward,
leaned his head back and gave a hissing groan.

The sound wasn’t loud, but the man stilled,
then slowly dropped his arms, turned his head and looked right at
their bush. Right at them.

Garrett Stark watched the kids disappear into
the night. Before now, only the brown-haired one had been hanging
around. Tonight he’d brought along a towhead for company.

Garrett smothered a smile as the boy
stumbled, fell, then righted himself and ran on. The towhead
appeared to have mighty big feet. Garrett remembered having a whole
lot of scraped knees for a whole lot of years. At least until he’d
grown into his own feet.

Would the two be back tomorrow with friends?
What was so darn fascinating about him? These days he didn’t even
interest himself.

They couldn’t know who he was. He’d had his
agent rent this place for him. He never connected a phone,
preferring a cell phone because he moved around so much. Even if
the kids had heard his name, weren’t they a bit young to know the
work of Garrett Stark, bestselling horror novelist?

Or at least he had been a bestselling
novelist up to his last book—which just might be his
last
book the way things looked.

Today had begun well enough. He’d rolled out
of bed with the sun, watched the wake-up news while he ran on the
treadmill, a necessary but horrific evil in his opinion—both the
news and the treadmill—then taken his coffee into the office,
answered his e-mail and begun to write.

Like every other day for the past nine
months, things had gone downhill from there. By lunch he had one
page. As punishment, he skipped lunch. He wasn’t hungry anyway. He
ought to recommend panic sauce to Jenny Craig International.

By early evening, he had two pages. However,
when he read them over he decided the two could be combined into
one, and he was back to where he’d started at lunch. What could be
a suitable punishment for that?

At the insistent buzz of his cell phone, he
glanced at the caller ID, which revealed cruel and unusual
punishment. A call from his agent, Andrew—never Andy, never
Drew—Lawton. As if anyone would address someone of Lawton’s
demeanor as Andy.

Lawton might resemble a proper English earl,
but his negotiation skills were pure New York City, where he’d
lived all his life. Andrew worked fast, talked fast; hell, he even
walked fast.

“I expected a rough draft by now.” Andrew
never bothered with such trivialities as “Hello.”

“Me, too,” Garrett mumbled.

“You’ll be the first to know when I’ve got
one.”