Legionary: Land of the Sacred Fire 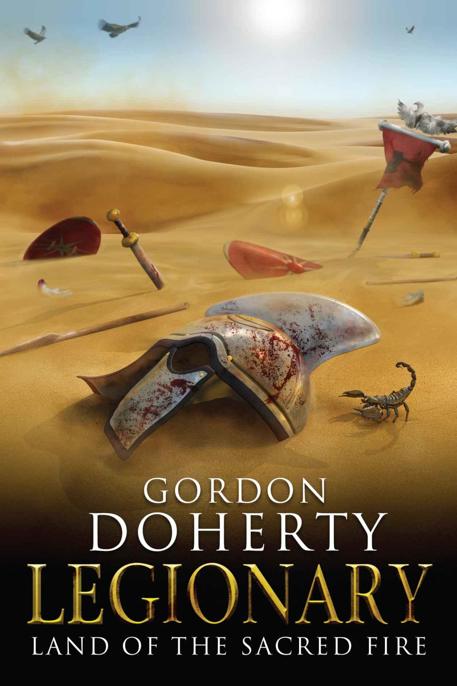 LEGIONARY
LAND OF THE SACRED FIRE

All rights reserved. This book may not be reproduced in any form, in whole or in part, without written permission from the author.

Numerius Vitellius Pavo, enslaved as a boy after the death of his legionary father, is thrust into the border legions just before they are sent to recapture the long-lost eastern Kingdom of Bosporus. This sees him thrown into the jaws of a plot, so twisted that the survival of the entire Roman world hangs in the balance…

LEGIONARY: VIPER OF THE NORTH

In the frozen lands north of the Danubius a dark legend, thought long dead, has risen again. The name is on the lips of every warrior in Gutthiuda; the one who will unite the tribes, the one whose armies will march upon the empire, the one who will bathe in Roman blood . . .

STRATEGOS: BORN IN THE BORDERLANDS

When the falcon has flown, the mountain lion will charge from the east, and all Byzantium will quake. Only one man can save the empire . . . the Haga!

STRATEGOS: RISE OF THE GOLDEN HEART

Stay strong, Haga, for the Golden Heart will rise in the west. In the morning, he will wear the guise of a lion hunter. In the afternoon, he will march to the east as if to conquer the sun itself. In the evening you will stand with him in the final battle, like an island in the storm . . .

The writing of this volume would have been extremely difficult, nigh impossible, without the help of those who have advised me, beta-read for me, bantered with me, endured my foul-mooded days and generally kept me smiling. So, to name but a few . . .

See glossary (at rear of book) for a description of terms

See glossary (at rear of book) for a description of terms 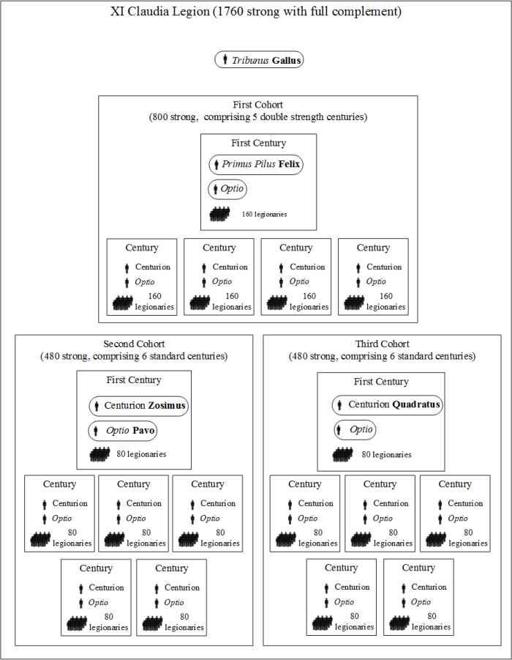 The Roman-Persian Frontier circa 377 AD 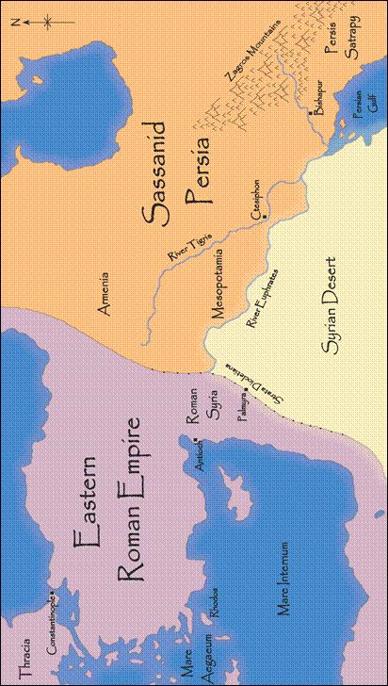 The empire’s legions fled. They thundered westwards across the baking plain, the noon sun glaring down upon them like a Persian spy. Legionaries, Syrian archers, Armenian slingers and ironclad riders – more than thirty thousand men all told, gaunt and bathed in sweat, armour battered and caked in dust. Their staggered and untidy formation betrayed great anguish. Each of them shot fearful glances over their shoulders as they jogged, parched tongues darting out over cracked and bleeding lips.

Near the front of the retreat,
Comes Domesticorum
Jovian led the Imperial Guard. He cut an impressive figure, broad and tall, his face ruddy and well-weathered. But his heavy brow shaded the fear in his eyes. It was a fiery terror that needled at his guts as he thought of those who pursued them.
Don’t look back,
he mouthed, fixing his gaze on the west. It offered only golden dust and azure sky, but soon they would be back at the eastern banks of the Tigris. Soon they would be reunited with the Roman fleet. Soon he would be safely aboard a
bireme
and then back in Roman Mesopotamia on the western banks of the river. At that moment, an image flashed through his mind; of the thousands of legionaries who had been slain on this wretched campaign, their grey, lifeless eyes fixed on him. In these last weeks they had fought and died in some of the most ferocious battles he had ever witnessed. They would never again feel the sun on their skin or the caress of their loved ones. Jovian, however, had barely sullied his sword on this journey. Yet here he was, dreaming only of his own wellbeing. He scowled at his timorous thoughts as self-loathing clutched and twisted his heart. He bit into his bottom lip until he tasted blood, then looked up to the figure riding just ahead.

Emperor Julian sat astride a white stallion, wearing a wreath that hugged his flaxen curls like a crown. He wore no armour – only pure-white robes and a sword belt. This epitomised the man. The one who had renounced the Christian God and revitalised the old pagan ways. The strident and fearless leader who had led the army into this burning land, intent on ending the centuries-old Persian threat. The legions loved him, hailing him for his seemingly endless courage. Julian was everything Jovian longed to be.

From where . . . from where do you draw your courage?
Jovian mouthed.

But his envy faded when he saw something up ahead; the shimmering golden infinity now offered a faint, sparkling thread of turquoise.
The Tigris!
His heart soared momentarily, then he frowned, noticing something else; a dark smudge by the banks. The heat haze sharpened to reveal the last wisps of black smoke spiralling from the incinerated Roman fleet. Charred timbers, torn sails and smouldering masts jutting at all angles. Hundreds of vessels. Utterly ruined.

Jovian slowed. The rest of the column slowed, jaws dropping as the tang of wood smoke danced in the stifling air. He shot glances around his imperial guardsmen, cooking alive in their scale vests. They gawped at the fleet, then twisted to behold the still and silent horizons behind them in terror. A chorus of panicked murmurs broke out all along the vast column. Eyes darted around the sweltering land, then all looked to the Emperor.

‘Emperor?’ Jovian gasped, failing to disguise the tremor in his voice. ‘The Persians did this?’

Emperor Julian stared solemnly at the ruined fleet, then gave the faintest shake of his head. ‘No, not the Persians.’

Horror shuddered through Jovian’s chest as he realised what had happened.

Emperor Julian continued; ‘I had no choice. When we set off from these banks, I gave the order to burn the fleet lest it fell into Persian hands.’

‘But how will we . . . ’ Jovian’s eyes darted to the far banks of the river. Safety lay in sight but out of reach, across the tumbling waters of the Tigris. This was not bravery, this was madness! The emperor’s hubris would be the death of them all.

‘The fleet is gone. But the riverbank will protect our rear and our flanks,’ Emperor Julian said as he heeled his mount round to look over his bedraggled army then off to the east. He winked, straining to see through the heat haze that lay out there. Suddenly he sat up straighter in the saddle, a confident rictus spreading across his face. ‘Yes . . . it seems that either death or glory will grace us today.’

Jovian’s flesh crept as he turned to follow the emperor’s gaze.

The eastern horizon offered nothing but a blur where golden dust met azure sky. Then a thunderous
boom
burst across the land. Then another.

The heat haze flickered and a silvery dot appeared, slowly expanding to fill the eastern horizon like the horns of an iron bull. Now the war drums throbbed in an eager rhythm.

Jovian gawped at the sight. The Savaran cavalry, the Persian war machine,
Shahanshah
Shapur II’s finest. They seemed to rise from the sands like demons. A sea of spear tips, iron helms and riders. Each
gund
of one thousand men was segmented into ten
drafshs
of one hundred, and each hundred carried a banner of fluttering fabric – vibrant reds, greens, golds and blues depicting bears, deer, asps and lions. And these endless ranks were punctuated by great, fierce and all-too-real creatures, the likes of which Jovian had never before set eyes upon; beasts with swishing, armour-plated trunks, bronze-coated tusks and archer-packed cabins strapped to their broad backs.

The Savaran were here to annihilate the Roman war machine that had pierced into the heart of Persian lands, the legions that had only days ago dared to attempt a siege of the Sassanid capital of Ctesiphon. A clutch of dark-robed
magi
walked before this army, holding aloft gemmed, gilt torches, the flames flickering and lurching like serpents’ tongues. The magi
carried this, the Zoroastrian Sacred Fire, as a testament to their great god,
Ahura Mazda,
and to inspire the masses who marched behind.

CARLOTA FAINBERG by Antonio Muñoz Molina
Elemental Omen (Paranormal Public Book 10) by Maddy Edwards
Parched by Georgia Clark
Touch of a Scoundrel (Touch of Seduction 3) by Mia Marlowe
Last Things by C. P. Snow
Veiled by Caris Roane
The Girl in Blue by P.G. Wodehouse
Ghosts of Koa, The First Book of Ezekiel by Colby R Rice
Devil's Match by Anita Mills
The Girl in the Flammable Skirt by Aimee Bender
Our partner