Read Life's a Beach and Then... (The Liberty Sands Trilogy Book 1) Online

Life's a Beach and Then... (The Liberty Sands Trilogy Book 1) 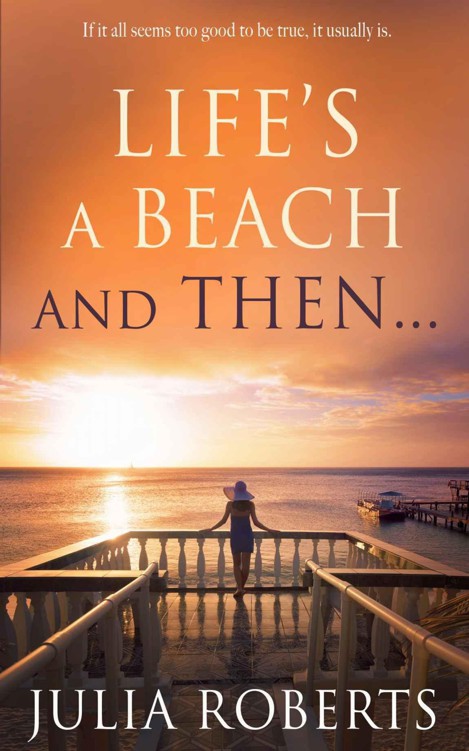 Preview: If He Really Loved Me…

Julia Roberts
was born in Nottingham
and was inspired to write her first play at the age of ten after winning second
prize in a writing competition with a short story called ‘The Foundling’.

Throughout her forty-two year career in the entertainment
industry, initially as a dancer before becoming a TV presenter twenty-five
years ago, she has written articles for magazines and newspapers and for the
past five years a weekly blog on qvcuk.com where she has worked for twenty-one
years.

Although she had always wanted to write a book Julia was a
busy working mum so it wasn’t until her two children left home that she finally
fulfilled her dream and finished her first book, a memoir entitled ‘One Hundred
Lengths of the Pool’. Two weeks after it was published by Preface Publishing,
Julia went on holiday to Mauritius and was instantly inspired to write a novel,
Life’s a Beach and Then… the first book in the Liberty Sands trilogy.

She now lives in Ascot with her ‘other half’ of thirty-seven
years and occasionally one or other of her children and their respective cats.

The right of Julia Roberts to be identified as the Author of
the Work has been asserted by her in accordance with the Copyright, Designs and
Patents Act 1988

No part of this publication may be reproduced, transmitted,
copied or stored in a retrieval system, in any form or by any means, without
the prior written permission of the publisher and author. Nor be otherwise
circulated in any form of binding or cover other than that in which it is
published and without a similar condition including this condition, being
imposed on the subsequent purchaser.

All characters in this publication are fictitious and any
resemblance to real persons, living or dead, is purely coincidental.

life’s a bitch and then you die

Holly sank back into the comfortable leather seat of the
air-conditioned, chauffeur driven car that the Plantation House hotel had sent
to meet her at Sir Seewoosagur Ramgoolam International Airport. She was
grateful to escape the vicious heat of the early afternoon Mauritian sun, which
had caused a trickle of perspiration to run down her spine in the short walk
from the terminal building. It was a complete contrast to the freezing temperatures
she had left behind in London twelve hours previously.

The flight from Gatwick had been delayed by three hours,
initially to wait for some passengers arriving on a connecting flight from
snowbound Paris, and then for the de-icing procedure which had kept them
sitting on the tarmac for over an hour, unsure whether or not they would be
leaving for their exotic destination.

Holly didn’t mind too much, after all it wasn’t her
hard-earned cash paying for the trip to Mauritius and besides it gave her the
opportunity to do a bit of people-watching, a pastime she indulged in a lot
these days. The only thing that had made her slightly nervous was the engineer
repeatedly making his way from the flight deck to the economy-class section,
torch in hand, to peer through the porthole windows checking the condition of
the flaps during the de-icing procedure. Holly had comforted herself with the
thought that the pilot would not risk his own neck, or that of his crew, just
to appease a bunch of holidaymakers.

By the time the flight eventually took off Holly’s eyelids
were feeling heavy and she was asleep before dinner was served. Since she was a
small child mechanical motion had a sleep-inducing effect on her, as her father
had discovered when she was a teething baby. He would bundle her into her car
seat and drive around their council estate in a suburb of Nottingham until she
was lulled to sleep.

Holly bit her lip to stop it trembling as she thought of her
father and wondered what he would have made of her travelling to a five-star
resort on an island paradise in the back of a limousine. He would probably have
been quite sad that I am on my own, she concluded.

She turned her head to look out of the window at the passing
countryside but also to avoid making eye contact with the driver through his
rear-view mirror, particularly as her eyes were filling with tears. She reached
into her handbag for a tissue. At this sign of movement the driver, who had
introduced himself as Sachin when he had held the car door open for her at the
airport, tried to strike up a conversation.

‘Is this your first time in Mauritius?’ he asked.

It was a standard opening gambit and Holly was very tempted
to say ‘No’, which would probably have saved her from further conversation, but
it actually was her first time and she knew from past experience that the
information her driver/guide would impart could be very useful.

‘Yes it is,’ she replied and settled back to soak up all the
local information, occasionally interrupting his flow with a question of her
own.

At least it made the journey pass quickly and in no time at
all they were making a right turn onto a road signposted to Flic en Flac and
she saw the small town at the bottom of the hill, with the beach and ocean
beyond. Sachin drove through the town, still indicating points of interest,
until they reached a T-junction with only a stretch of grass, scattered with
tall trees, between them and the beach.

‘Are they pine trees?’ Holly asked, as Sachin turned the car
to the left.

‘They are filaos trees,’ he replied. ‘They help to prevent
sand erosion.’

Less than a mile later the car turned into a sweeping
driveway at the end of which stood the Plantation House hotel, a striking
colonial-style building, which was to be Holly’s home for the next seven days.

‘Pretty impressive,’ said Holly almost to herself as the car
door was opened for her by one of the uniformed reception staff. She noticed
the slight nod of the head, the smile and the look of pride in the man’s eyes.
Obviously he is happy in his work, Holly thought, as she thanked Sachin,
handing him a 200-rupee tip, and climbed the half dozen steps to the front
entrance.

This time she kept her thoughts to herself as she found
herself in a double-height reception area with a vaulted ceiling and a view
straight through to the beautifully manicured gardens, against a backdrop of
the deep blue ocean.

‘Welcome to the Plantation House, Ms Wilson,’ said a tall
slim man in a light-coloured linen suit. ‘My name is Vikram. Please follow me
and we can get you checked in as quickly as possible. I trust you had a
pleasant journey?’

‘Yes thank you,’ said Holly, as she followed Vikram through
to a comfortable seating area which, although not air conditioned, had a
pleasant breeze blowing through the glass-less windows and overhead ceiling
fans to assist the flow of air.

‘Please take a seat,’ he said, indicating a low rattan sofa,
‘and I will have my colleague attend to you.’

Moments later a waiter appeared carrying a tray, on which
there were three glasses containing a peach-coloured liquid, complete with a
bendy straw and a cocktail stick piercing a piece of fresh pineapple and mango.

Holly took one glass and allowed her eyes to follow the
waiter as he delivered the two remaining drinks. She instantly recognised the
distinctive middle-aged couple who had been sat several rows in front of her on
the plane, in the business-class section. The man had been very attentive
towards his travel companion making sure she was comfortable throughout the
long journey. Holly had thought at the time that it was good to see that
chivalry hadn’t completely died out and it had made her wish that she had
someone other than her darling son Harry to care for her. As the man took his
drink he noticed Holly and raised his glass in acknowledgement.

Oops – caught, she thought, raising her glass in his
direction and feeling the warmth in her cheeks as she flushed slightly. I must
be tired. I don’t normally get caught people-watching.

‘Ms Wilson,’ said Vikram, clearing his throat slightly to
gain her attention, ‘there is a short registration form to fill out and then we
will transport you to your room.’

Five minutes later Holly had completed the form, making sure
she had ticked the box for premium Internet access so that she could work in
her room and not just the public areas. She finished her drink and was escorted
back to the front of the hotel, smiling at the couple from the plane as she
passed.

A golf buggy, already loaded with her silver Antler
suitcase, a purchase she had made eight months previously with the first
paycheque from her new job, was waiting to take her to her room. The buggy
carried her through the colourful gardens, past the tennis courts which
unsurprisingly were unoccupied in the heat of the afternoon, and the children’s
play garden, again completely deserted, despite being located under the shade
of giant trees with huge waxy leaves, eventually coming to a halt outside a
two-storey building housing a dozen rooms.

After Deven, the porter, had finished his explanation of how
everything in her room worked she pressed a 100-rupee note into his hand. It
always helped to have a good relationship with the hotel staff.

Holly sat on the edge of the bed taking in her surroundings.
The decor was in neutral shades of ivory and taupe with dark wood furniture.
There was a flat-screen television, which Deven had explained showed not only
the local channels but also DVDs of recent movies played out from the hotel
reception. The en-suite bathroom had a bath and a shower and was separated from
the bedroom by a glass-less window that had a Venetian blind for privacy, a
necessity as her room was on the ground floor. This meant there was a terrace
rather than a balcony, complete with a small table and chairs, and two sun
loungers, and her room was less than twenty metres from the adults only pool.

This is perfect, she thought, reaching for the telephone
receiver and dialling 0 to speak to reception. It was answered on the second
ring.

‘How can I help you, Ms Wilson?’ asked the receptionist.

‘Oh, hello, I’m sorry to trouble you but my room doesn’t
have a sea view,’ Holly said.

‘I see. Did you request one when you made your reservation?’

‘Yes I did,’ replied Holly, mentally crossing her fingers.

There was a tiny pause before the receptionist said, ‘I must
apologise for our mistake. Please give me five minutes and I will see what I
can do.’

If I Can't Have You by Patti Berg
With Liberty and Justice for Some by Glenn Greenwald
Song of Solomon by Kendra Norman-Bellamy
Unicorn Point by Piers Anthony
Kissing Snowflakes Abby Sher by Unknown
The Last Days of Video by Jeremy Hawkins
The Stubborn Lord by Michelle M. Pillow
365 More Ways to Cook Chicken (365 ways) by Barnard, Melanie
Beirut Payback: MacK Bolan by Don Pendleton
Texas Pride: Night Riders by Greenwood, Leigh
Our partner