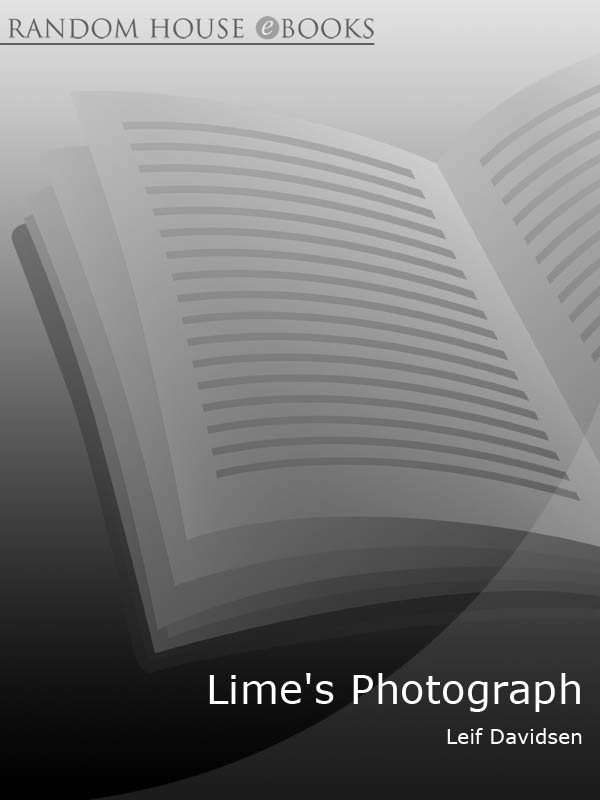 Peter Lime is trained to hunt down his prey and catch them on film. But now he is the one being hunted. Whose prey has he become? And what is it that he has that these people will kill to get? Lime is a Danish paparazzo, living in Madrid. For more than 20 years he has stalked and captured the rich and famous on film, making vast sums of money from exposing their secrets – the more salacious the image, the bigger the fee. But lately he’s been thinking of giving it up.

Then he goes on a routine assignment, snapping a Spanish minister out sailing with his mistress, and suddenly his world is turned upside down. When a fire destroys his home, but not all of his photographs, Lime sets out to discover a motive and finds himself drawn into the complex and terrifying web of international terrorism.

Version 1.0
Epub ISBN 9781446483404
www.randomhouse.co.uk
Published by Vintage 2002
4 6 8 10 9 7 5 3
Copyright © Leif Davidsen 1998 English translation © Gaye Kynoch 2001
Leif Davidsen has asserted his right under the Copyright, Designs and patents Act, 1988 to be identified as the author of this work
This book is sold subject to the condition that it shall not by way of trade or otherwise, be lent, resold, hired out, or otherwise circulated without the publisher’s prior consent in any form of binding or cover other than that in which it is published and without a similar condition including this condition being imposed on the subsequent purchaser
First published in Great Britain in 2001 by The Harvill Press
Vintage
Random House, 20 Vauxhall Bridge Road, London SW1V 2SA
Random House Australia (Pty) Limited
20 Alfred Street, Milsons Point, Sydney,
New South Wales 2061, Australia
Random House New Zealand Limited
18 Poland Road, Glenfield, Auckland 10, New Zealand
Random House (Pty) Limited
Endulini, 5A Jubilee Road, Parktown 2193, South Africa
The Random House Group Limited Reg. No. 954009
www.randomhouse.co.uk
The publishers acknowledge the financial support of the Danish Literary Foundation towards the publication of this edition
The publishers gratefully acknowledge the use of the following quotations: Tom Kristensen, from
Fribytterdrøme
, Hagerup Forlag, 1920. Sten Kaalø, from
Med hud og hår. 24 digte
. Sigvaldis Forlag, Denmark, 1969.
Steen Steensen Blicher, from
The Diary of a Parish Clerk and Other Stories
, The Athlone Press, London, 1996, translated by Paula Hostrup-Jessen.
Markus Wolf, from
Man Without a Face
, Jonathan Cape, London, 1997. Carsten Jensen, from
Jet har hørt et stjerneskud
, Rosinante Forlag, Copenhagen, 1997.
A CIP catalogue record for this book is available from the British Library
ISBN 1 860 46988 4
To Ulla, for love and for everything
.
About the Author

Leif Davidsen was born in 1950. He spent 25 years at the Danish Broadcasting Corporation as a radio and TV correspondent, specialising in Russian, East and Central European affairs, and has been a correspondent in both Spain and Moscow. He published his first novel in 1984 and has written full-time since 1999. His novels are bestsellers in several European countries.

The term “paparazzo” was coined by the Italian film director Federico Fellini, who used the word as a description of a “gossip” photographer in the film
La Dolce Vita
in 1960. A paparazzo is a photographer who, like any hired assassin, lies in wait to capture the rich and famous in his viewfinder. Among paparazzi, the English term for a good and well-executed shot of a celebrity is the same word as hired assassins use about a contract – a “hit”. A good hit can earn the lucky and ingenious photographer many thousands of dollars. Occasionally, several million.

There is no way of knowing when everything could shatter and your life be turned upside down – one minute secure and familiar and the next minute a nightmare in which you’re running on the spot in slow motion, trying to wake up to reality. But the nightmare is reality. You feel safe by the time you’ve got halfway through your life, grateful that you managed to find love even though it came late, that you brought a child into the world to carry on the family name. Maybe that’s an old-fashioned attitude, but continuity mattered to me as I approached 50 and had to acknowledge that I was now nearer to my death than my birth.

It began with my mobile phone beeping. I knew I shouldn’t answer it, but I couldn’t stop myself. You never know what lies in store. Good news, bad news, business, bills, bogus calls, death, maybe something significant. You don’t know what you might be missing, and even though I was getting older, I wasn’t too old to take on the assignments and opportunities that presented themselves. But with age had come disgust and conscience. I’m writing the words in Danish and there they are on my laptop’s white screen and I’m surprised how easily they flow, considering that I’ve been speaking and in particular writing in English and Spanish for so many years. But it seems wrong to use a foreign language here, now that I’m trying to
write more than just a brief article, a picture caption, a memo or a love letter.

I was on my stomach, the sun beating down on me. I was lying awkwardly on the weathered, rocky ground where, in spite of the distance down to the beach, little black grains of sand had been blown up by the wind and had found shelter in every cranny. I lay like a sniper in Bosnia, breathing calmly and slowly, conscious of the sun through my thin, pale t-shirt and blue jeans and on my neck below the rim of my white sunhat. Brown, parched mountains rose behind me. If you followed them further inland, you’d see how they increase in size, becoming high and inaccessible, but out here at the coast they were gentler, yet still burnished harsh and arid by the sun and the wind which blows off the Mediterranean in the winter, colder and more fiercely than you might think.

Down below me the little bay was deserted. It was one of the many small coves which over thousands of years the sea had cut into the Costa Brava. The French-Spanish border was a few kilometres to the north, to the south the tourist hell began, where over a couple of decades human greed had succeeded in destroying an area in which generation after generation had lived their lives without spoiling or altering their surroundings. The Spanish Mediterranean coastline has undergone a more radical transformation in a few years than in the previous two millennia. But up here near the border, the landscape was still relatively unchanged. The sea lay azure and glittering under the bright, golden sun, like a computer-enhanced postcard. I could see yachts tacking across the sea breeze and a couple of expensive speedboats dragging white streaks through the water, but there was no sign of life in the bay below me. I felt like an explorer seeing it for the first time. It was one of many coves that could only be reached from the sea. The rocky coastline rose sharply, and an experienced mountaineer might be able to breach the overhang of the cliffs, but ordinary tourists
would be wise to keep away. The cove was what the holiday brochures promised: a private, beautiful and unspoilt spot on the bustling, efficiently run tourist coast.

I was lying at an angle, so I had a clear sightline both out to sea and down onto the cove’s sandy beach, which was protected from prying eyes by the rugged cliffs. If you didn’t know to look, you would never discover that there was a beautiful little cove beneath the overhang. Two jagged rocks a few metres out even hid the grey, powdery sand from the sea. Unless someone who knew what they were looking for took the trouble to use binoculars, the cove was hidden. It was a perfect place to be alone. Or for two to be alone.

The lovebirds had chosen a good spot. I was thinking in Danish, as I often did when I was waiting for a hit, concentrating my thoughts on the few hundredths of a second that separated me from success or failure, letting my mind wander and wind through the labyrinth of memory, thinking about my two loved ones; or recalling films and books and love affairs in an attempt to let time become nothingness. Become
nada
, a non-existent state, so that boredom didn’t turn into impatience, leaving me unready when the moment, the moment of truth, arrived.

I kept an eye on the speedboats. One of them was streaking along the coastline, dragging a ruler-straight trail in its wake, but the other one changed course, slowed down and sailed into the little bay. It was a six-metre, gleaming white motorboat, with an elegant, svelte line. A young woman was lying on the foredeck, wearing black Ray-Bans and nothing else. They suited her. The man, naked from the waist up, was standing at the wheel, steering the boat in while he kept an eye on the echo sounder. There could be treacherous reefs and rocks this close to the coast, but either the white motorboat didn’t draw a great deal of water, or he knew his way in between the two rocks. It was the latter, according to my informant.

I made my living from the public’s insatiable craving to see the famous and rich disgracing themselves. Although I had 20 years’ experience of our modern greed and lust for power, it still surprised me that so many high-ranking men were willing to sacrifice career, marriage and status for the sake of sex. They were so sure of their invulnerability that they took huge risks; just for the chance to prove that they were still men. Didn’t they know that for every secret there was also someone willing to sell that very secret?

I had ended up here on the Costa Brava as the result of a tip several weeks earlier. It was always like that. The numerous informants and contacts that I had paid, nurtured, dined, praised, encouraged, buttered-up, massaged the egos of, were like an extensive intelligence network that kept me supplied with information about the affairs of the famous. A network that identified the target for me and gave me the essential raw material. Then it was up to me to work out the logistics, do a recce of the area and set up the hit. It had taken me the previous fortnight to get ready to strike this target who was now nearing the shore, blissfully unaware. My information had been extremely specific, right down to the name of the boat. When a new government takes charge after the old one has enjoyed the sweetness of power for many years, it ought to look over its shoulder more carefully. Especially if the new government is one founded on God, King and Country and hoists the moral banner so high that it has lost touch with dry land.

Owned By The Alphas: Part Four by Faleena Hopkins
Beastly Desires by Winter, Nikki
The Spire by Patterson, Richard North
The Fun Factory by Chris England
Bitch Slap by Michael Craft
Ghost Moon by John Wilson
The Children Of Dynmouth by William Trevor
Red Velvet (Silk Stocking Inn #1) by Tess Oliver, Anna Hart
What Are You Hungry For? by Deepak Chopra
The Caliph's House by Tahir Shah
Our partner