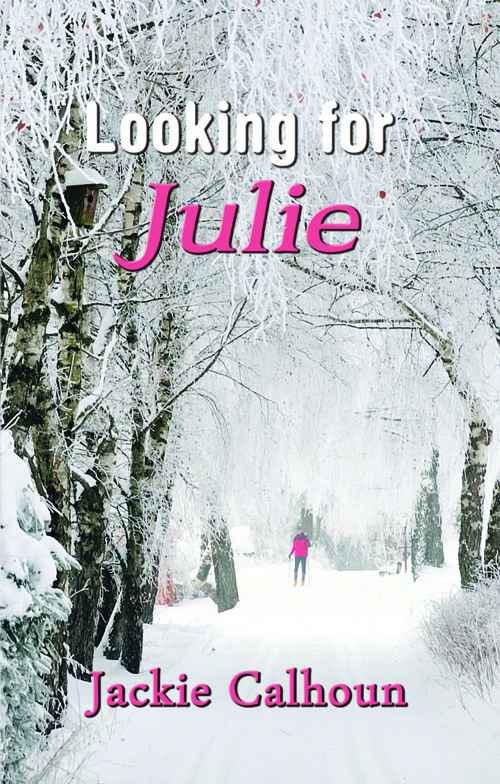 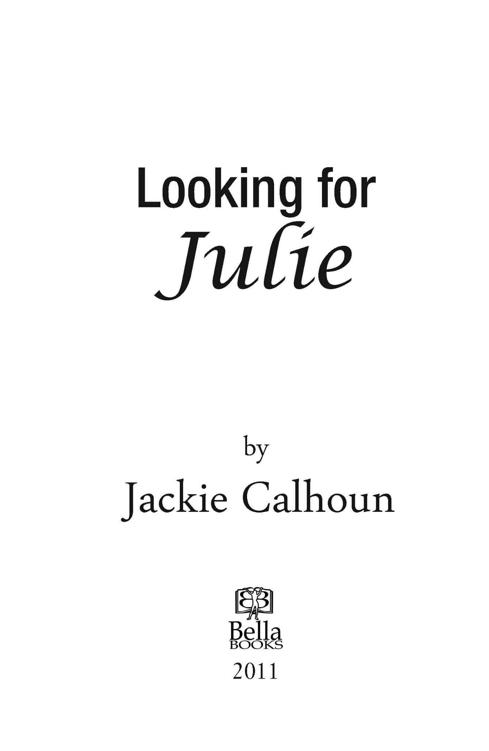 Other Bella Books by Jackie Calhoun

End of the Rope

Seasons of the Heart

Woman in the Mirror

Thanks to my faithful first reader, Joan M. Hendry.

Thanks also to Janet Elizabeth Smith for her firsthand knowledge of the American Birkebeiner, without which I would have been lost.

Special thanks to Madeline K. Snedeker for her valuable input on UW-Madison and the city of Madison.

Honorable mention goes to my editor, Katherine V. Forrest, who was my first editor twenty-some years ago.

And, as always, special appreciation to those at Bella Books, who made this book possible.

Jackie Calhoun is the author of the following Bella Books—
End of the Rope, Wrong Turns, Roommates, The Education of Ellie, Obsession, Abby’s Passion, Woman in the Mirror, Outside the Flock, Tamarack Creek, Off Season
and
Seasons of the Heart
(reprint). She also wrote
Crossing the Center Line,
an Orchard House Press book, and ten novels published by Naiad Press. Calhoun lives with her partner in northeast Wisconsin.

For more information on her and her books, go to her website at www.jackiecalhoun.com.

For comments and questions, e-mail her at [email protected]

Sam leaned over and spoke into a small opening in the glass window. She had always wondered if the glass was bulletproof but had never asked. “My name is Samantha Thompson, and I want to make an appointment with Dr. Julie Decker.” She had not seen Julie in months, and this person behind the glass looked unfamiliar.

The young, heavyset woman, Linda according to the tag pinned to her sweater, gave her a perplexed smile. “There is no Dr. Decker here.”

“Let me check.” Linda got up and said something to a vaguely familiar older woman seated in front of one of the computers, who looked Sam’s way.

“Dr. Decker doesn’t work here anymore,” Linda said when she came back to the window.

The woman stared at her for a few heartbeats, before saying, “I don’t know where she is, but she’s probably on the web. Almost everyone is.”

“Thanks.” Sam turned away.

She took the stairs to the first floor. Outside, her breath vaporized in the cold. She jumped into the backseat of the old Escort idling in one of the visitors’ slots. “Let’s go,” she said to the driver, slamming the door and stuffing her hands back in her pockets.

“Hey, that was quick. Everything okay?” Jamie asked from behind the wheel.

Nothing was okay. Julie had been her safety net. “She’s not there anymore.”

“Your shrink?” From beside Jamie, Nita turned to look at her roommate. Dark eyes. Dark hair. Sculpted facial features. Sam thought she was beautiful.

She gave her a twisted smile. “Yeah, my fucking shrink. She could of told me she was leaving.”

Jamie put the car in reverse and stepped on the gas. A horn blared and he stomped on the brake, his eyes wide in the rearview mirror. “Where the hell did that come from?” A black four-wheel-drive truck drove slowly past.

Jamie opened the window far enough to shove a fist out.

The truck stopped and an older, beefy guy, wearing a dirty ball cap jumped out of the driver’s side. “What you say, nimrod?”

“Use your brakes, not your horn,” Jamie shouted and rolled his window up tight. He began to back again, but now the guy with the ball cap was pounding on the glass.

“Hey, open up and say that again.”

“Let’s get out of here,” Nita said in a scared voice.

Jamie shot backwards, narrowly missing the man. He put the car in drive and, tires squealing, sped past the parked truck.

Sam was looking through the rear window, watching the guy climb into the truck. “Better step on it. He’s coming after us.”

Jamie veered out of the parking lot, turned right on a one-way street going left and weaved through swerving traffic. Horns blew. Brakes screamed. Jamie made a sharp turn onto a side street and Sam let go of the door handle she’d been clutching.

Jamie threw his violet-crowned head back in laughter just before pulling into a parking spot, seeking safety among kids and cars. “Guess we lost that dude.”

The truck double-parked next to them. The passenger window rolled down smoothly and a voice snarled, “Watch for me in your rearview mirror, you fucking freak.” The vehicle sprang forward and turned at the next corner.

Sam’s heart raced. Jamie was always mouthing off to the wrong people. He’d suffered more than one black eye that way. “Let’s get out of here.” She watched the cross street, expecting the truck to double back around the block.

“That was real smart,” Nita said, shooting a dark look at Jamie as he drove away.

“Where do you want to go now?”

Sam wanted to go back to the apartment she shared with Nita so that she could Google Julie on her Mac.

“Take me home.” Nita looked and sounded mad. “I think you should re-dye your hair brown or something. If you’re going to do stupid stuff like yelling at people who can knock the shit out of you, you better look less conspicuous.”

“Hey, I’ll still be driving the same fucking car.” The car with all the bumper stickers that said
Peace
and
If You Can Read This You’re Too Close
and
Get A Life And Leave Mine Alone
. Stuff like that.

“Hey, everyone carries guns these days. I don’t want to get shot because you hollered at the wrong person.” She was yelling.

Nita quieted. She did that. She’d be hollering one minute and silent the next, like she couldn’t be bothered. Sam nervously turned the tiny fake diamond in her nose, her eyes on the traffic, alert for the black truck.

Safely back at her apartment she typed Julie Decker in the Google slot and got some other Julie Decker who owned a business. Snowflakes swirled outside her bedroom window. Cold air seeped through.

Sam had studied Julie’s diplomas on the walls of her office. She’d earned her bachelor’s, her master’s and her PhD in Psychology from UW-Madison. Julie had thought Sam had no longer needed her counseling. At the time, Sam had thought so too.

She threw herself on the double bed and stared at the cracked ceiling. Nests of cobwebs swayed slightly in the corners. She told herself she was okay. She had a three-point grade average and a job and an apartment. Didn’t that signal progress?

She’d gone to high school with Nita, but they hadn’t been friends then. When Nita asked her at the end of their sophomore year if she wanted to share an apartment with her, she’d been thrilled. Now they lived in three rooms plus a dinky bathroom cut out of a large house off campus. Tiny trees and bushes grew in the gutters. The paint was scaling off the exterior. The storm windows were no longer attached to the rotten frames and banged in the wind. The hallways and stairs between apartments were filthy.

Although Nita made Sam’s skin go hot and cold, she was terrified of offending her by making a move. Besides, Nita was obsessed with grades. Every free minute, she was studying or writing a paper or working at her job.

Sam waited tables at the same place where Nita was a hostess. She didn’t like the job much. Customers frequently changed their orders or complained that everything was too spicy or not cooked enough or too cold. The cook yelled at her when she returned an order.

“I’ve been texting you and getting no answer. Are you through with exams?”

“Yeah. My parents are coming to get Nita and me tomorrow.”

“I’ll take you home. That guy found me, the one in the truck.”

A shiver galloped over her skin. “How?”

“I was getting out of my car, and he nearly took my fucking door off. He blew his horn and I damn near wet my pants. God, doesn’t he have to go to work or something? I can’t wait to get out of here. What time is Nita’s last exam?”

She called out to Nita who was in her room, studying with the door open.

“Tell him no more road rage,” Nita called back.

She passed that on.

Appleton was home and Sam had been there two weeks. Christmas and the New Year were memories. She had always loved Christmas. It was like a ceasefire had been called and an ambience of goodwill and calm descended on the household. She no longer snapped at her parents or sister and brother nor they at her. But now the calm had passed. Annoyance had rippled through her at her mother’s suggestion this morning—“Do you think you could do some wash? There are piles of dirty clothes in the basement.”

Mostly her piles, she realized, even as she bristled. She glared at her mother, who waved a hand in defeat.

Her mother shrugged. “You could clean up the kitchen. It looks like a disaster hit.”

Her mother’s eyes glinted dangerously, but she only said, “See you later.”

She’d cleaned up the kitchen and was lying on her bed waiting for the washer and dryer cycles to end when Jamie called.

She tucked the phone between her shoulder and ear. “Hey, what’s happening?”

“If I get more bored, I’ll be dead. Want to go somewhere?”

“And do what?” She stroked Buddy, who was lying next to her. Her father always had a shit fit when he saw the mixed Lab on her comforter. He’d say, “Buddy has his own bed. Look, dogs don’t have shoes to take off, nor do they shower often. Get him off your bed. Now.” When everyone was gone either to school or work, though, she coaxed him onto the bed with her.

Iron Winter (Northland 3) by Baxter, Stephen
The Outcast by Calle J. Brookes
Red the First by C. D. Verhoff
To be Maria by Deanna Proach
Hope of Earth by Piers Anthony
The Land Agent by J David Simons
To Selena, With Love by Chris Perez
Jurassic Park: A Novel by Michael Crichton
The Forgotten by Tamara Thorne
Annie Was Warned by Jarrett J. Krosoczka
Our partner