Lucas: Origins Of A Demon 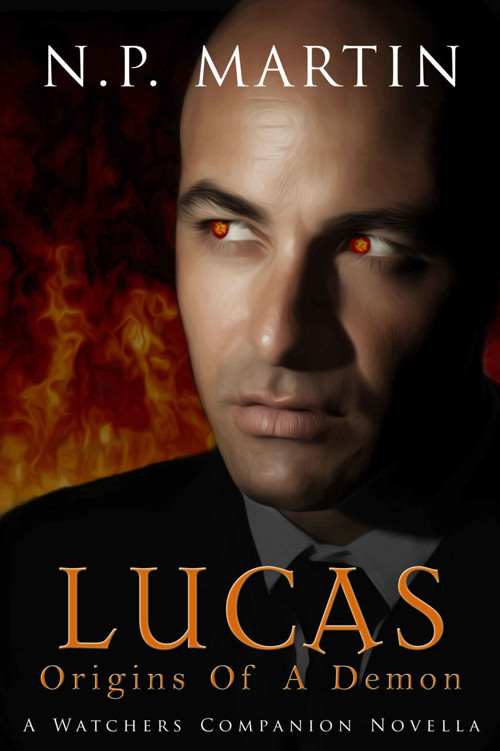 LUCAS: ORIGINS OF A DEMON

This book is a work of fiction. Names, characters, places, and incidents either are products of the author’s imagination or are used fictitiously. Any resemblance to actual persons, living or dead, events, or locales is entirely coincidental
.

Join my
Watchers Inner Circle
and help me slay some goddamn demons!

Join now and get a free copy of the Watchers companion novel,
Bad Grace
.

Plus other cool free stuff!

The inside of the Filthy Ecstasy club is near enough exactly what Lucas is expecting. In the last two hundred years, he has taken over and run more such establishments than he cares to count, in almost every country in the world. One thing he soon realized, was that there may have been differences in the establishments themselves, but the clientele is always the same. The faces may be interchangeable, but their patent desires are not. It’s a great business to be in, because your customers are always hungry and always willing to spend money, especially if the girls working there knew their jobs. Should he decide to appropriate the Filthy Ecstasy club, he will interview all the girls who work there personally, to make sure they are right for the job.

The first thing that hits him when he walks inside the club is the music. Banging techno music, turned up a few notches louder than it needs to be. Didn’t the owner of the place know that having the music too loud just made it harder for the girls to do their jobs? People still have to talk, even in a strip club. He will have to change the music to something less inclined to give headaches to people. Eighties hard rock usually works well, though not too hard, or you might as well blast heavy metal through the PA. He tried that once, played a load of hard and fast metal music in one of the clubs he owned. It didn’t go down too well. People got up and walked out. The devils music is not for strip clubs.

Looking around, Lucas sees mostly men on their own, huddled into the corner of the dark booths while they stare forward at the girls dancing on the two small stages to the right of the bar. Sitting at the tables around the front of the stages are men in groups, the usual assortment of guys out on buck parties, guys on outings from work. Lucas doesn’t see too many suits in the crowd, which makes him uneasy. He would prefer more suits. They pay more than the blue collar types, and they are generally less rowdy. Looking around, he only counts a few security guys standing idly bored, not really caring about the rowdiness of the guys near the front of the stage. Even when one of those guys gets on the stage with one of the dancers, his hands all over her, the bouncers take their time moving in.

Lucas shakes his head and tuts to himself. Those guys will have to go. He will get his own security, as he always does.

One thing he notices is the lack of non-humans in the place. Looking around, he is able to spot two werewolves and a single vampire sitting on his own. Lucas is surprised to even see them here at all. Most non-humans tend to prefer hanging around with their own kind, generally avoiding the human establishments unless they are on the hunt for food. Lucas knows by the hungry look in the vampires eyes that he is planning on having one of the dancers for dinner afterwards. Though not if Lucas can help it. At some point, he will give the vampire a friendly warning, tell him to find his food somewhere else. Neither of the girls dancing on stage will be drained tonight. They are clearly very good at their jobs, and Lucas intends to keep them on.

In fact, this looks to be the only thing the club has going for it, the girls who work here. Most of them not only looked the part, but the ones he saw walking around, talking to and dancing for the punters, did so with confidence and grace, two things he likes to see in the girls he hires. At least he won’t have to fire them all when he takes over the place.

One of the girls--a tall brunette with an Amazonian goddess of a body--comes strutting over to him as he stands looking around. She stops in front of him, looks him up and down, a genuine smile on her face, not the practiced plastic smile that most of these girls had. “Well hi, honey,” she says, her whiskey brown eyes sparkling, even in the gloom that surrounds her.

“Hi,” Lucas says, smiling back, enjoying the effect he is having on the girl, who looks to be in her late twenties.

“Can I escort you to a table?” she says, getting right up close to him, seeming to almost smell his essence, her eyes half closing. “Or we also have…private rooms.”

Lucas gives a small laugh. “I can’t think of anyone more lovely to be greeted by.”

The brunette laughs, her large natural breasts jiggling as she does so. He is glad to see a lack of silicone in the club. He can never understand why human women insist on pumping that toxic sludge into their breasts. Besides, if he wanted to fondle something that felt like a damn beachball, he would go to the beach instead. “Honey, I’m a lot more than lovely when I get going. How about you come with me and I’ll show you?”

She kisses him then, deeply, her tongue probing the back of his mouth. It’s not usual behavior for the girls in these clubs to kiss the clientele, but he knows she is only doing it because she can’t help herself. Like most women he meets, she is drawn to him like a magnet. Lucas always was the charismatic type, even when he grew up in ancient Egypt. It was also in Egypt that he learned the secrets of seduction and heightened charisma amongst other things, knowledge that was lost when Egypt came tumbling down. Lucas still remembers though, and those once learned skills have now become a part of his very nature, the very core of his being. Being such an old soul, that vital energy of his has only gotten more potent.

“I tell you what,” he says, gently pushing the girl off him. “Why don’t you point me in the direction of your boss, and then perhaps later we can find suitable quarters so you can show me just how lovely you really are.”

The girl’s eyes light up. “I hope you aren’t teasing me. You wouldn’t do that now, would you?” She puts a hand out and cups his balls, squeezes gently.

Lucas doesn’t flinch, but is grateful he chose such a well endowed body to possess. “I wouldn’t dream of it.”

Lucas walks behind the brunette girl, her big round ass jiggling enticingly as she struts along in her six inch heels. Yes, he thinks. I just may enjoy owning this place.

She takes him up a flight of stairs, at the top of which is a door leading into the manager’s office, and also the owner, he hopes. It would be an inconvenience if he had to go to the trouble of seeking out the owner as well.

The girl knocks the door, smiles at him while they wait. A gruff male voice from inside shouts, “What?”

Opening the door, the girl walks inside the office and Lucas follows her in. “Someone here to see you, Jake,” she says to the man sitting behind an untidy desk. The man is in his late forties, short, overweight, with thinning black curly hair and dark bloodshot eyes. Clearly an alcoholic, Lucas thinks. This should be easy.

“Do I know you?” Jake asks, obviously not happy that his drinking time is being disturbed. He looks at the girl. “Janice, what the fuck did I tell you about bringing strangers up here, huh? That fucking creep who ended up trying to rob me last month wasn’t enough? You want me to shoot this fucking guy too, huh?” He reaches into his desk drawer and pulls out a semi-automatic pistol, points it at Lucas. “Who the fuck are you? Did Dimitri send you? I already told your boss on the phone last week that it would take me a while to get the money. What the fuck is he sending you for?”

Lucas merely stares at Jake with an amused look on his face. “You’re funny,” he says, then turns to Janice. “Janice, can you be a doll and excuse us?”

Janice doesn’t look that freaked out by the fact that her boss is holding a gun. Obviously this was normal behavior for this guy. “Put the damn gun away, will ya, Jake,” she says. “This guy doesn’t work for Dimitri.”

“How do you know I don’t?” Lucas asks, still amused by the whole situation.

“Because anyone who works for Dimitri is a fucking scumbag, and you aint no scumbag, honey,” she says, batting her long lashes at him before heading to the door. “Don’t let me down later, huh?”

Lucas smiles broadly. “Not a chance.”

Janice gives him a broad smile like her night has just been made, and then closes the door behind her.

Jake still has the gun pointed at Lucas, his hand shaking slightly as he holds it loosely out in front of him. “So you don’t work for Dimitri?” he says.

Lucas eyes the bottle of whiskey on the desk. “Looks like it.”

“What? I can drink and work at the same time, can’t I? What fucking business is it of yours, anyway?”

“Well, it actually
is
your business that I’m here about.”

Jake shakes his head. “So you’re here to shake me down. You’re not with Dimitri, you’re from fucking Tony, aren’t you?”

Lucas is becoming impatient with the man’s unhinged behavior. He thinks about using his power on the man, but he doesn’t want to. Not unless he has to. “Jake, why don’t you put the gun away so we can talk? I came here because I want to make you an offer.”

“An offer,” Jake says, frowning. “What kind of offer? And you better not be trying to extort me because I’m already taking it in the ass from Dimitri, that Russian fuck.”

“Nothing like that. I’m here because I want to buy this fine establishment of yours.”

The frown on Jake’s face deepens. “You wanna buy this place?” He laughs and shakes his head, looks around like there are other people in the room. “Fuck me, the guy wants to buy the place.”