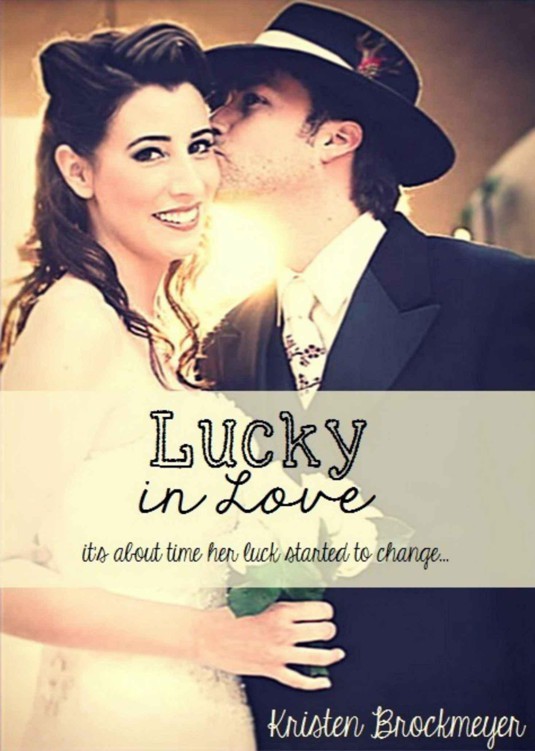 This ebook is licensed for your personal enjoyment only. This ebook may not be re-sold or given away to other people. If you would like to share this book with another person, please purchase an additional copy for each recipient. If you're reading this book and did not purchase, or it was not purchased for your use only, then please return to Amazon.com and purchase your own copy. Thank you for respecting the hard work of this author.

The growl of my 1948 Roadmaster downshifted to a throaty purr as I pulled into the jam-packed parking lot of the Spring Valley Wesleyan Church. I was so busy worrying about the serious bodily harm Addy was going to inflict on me if I didn't get in there in time to do my maid of honor thing that I didn't see the black and white blur that dodged out in front of me from between two cars. I mashed down on the brake but my reflexes weren't quick enough. There was a brief thunk and a moan loud enough to carry over my Sinatra-blasting stereo.

Oh, no,
I thought, instantly panicked.
Did I just hit a Saint Bernard?

Images of a bloody Beethoven lying broken beneath the wheels of my Buick popped into my brain in appalling Technicolor. I threw it in park and jumped out of the car, tears already blurring
my eyes. The tears dried up fast when I realized that, instead of a giant cuddly dog, I'd run over the guy who'd taken my virginity the night of my senior prom before abruptly moving to Illinois.

I nudged Chance Atkins with the toe of my shoe and fervently thanked God that he wasn't a Saint Bernard.

My morning had started off surprisingly great, which should have been my first clue that some major bad luck was in the works. I woke to the sound of birds chirping, the neighbor's dog barking and kids playing in the street, everyone apparently enjoying the unseasonably warm April weather. Granted, I immediately knocked a half empty beer bottle over on my alarm clock, frying it dead with a sizzling, popping hiss. And shortly after that, I stepped right into a cold, slimy puddle when I swung my legs over the side of the bed to feel around for my slippers. Louie, my one-eyed stray of indiscriminate origins, was apparently having hairball issues again. But a dead alarm clock and an icky gift from Louie were small potatoes, compared to what I was used to.

I wiped my foot on the rug and stumbled to the bathroom to flip on the little coffee maker I kept in there, hotel-style. I cranked the shower on for its usual five-minute warm-up, and squinted into the mirror to take stock. My reddish-brown hair corkscrewed out in various directions. There was a pillow pattern on my left cheek. Freckles stood out in stark relief on my small, pale nose. Normally a very nice shade of cornflower blue, my eyes looked almost purple today and clashed badly with the cluster of visible blood vessels that all shouted in unison: "You had too many beers last night!"

But it was nothing I couldn't work with. That was what makeup and
eyedrops were for.

After my shower, I wrapped my pink satin housecoat around myself and sat down at my Formica and chrome kitchen table to sip my second cup of coffee. The table was the latest phase of my furniture rescue project and went nicely with all the rest of the
hauté crap that I'd rescued from the side of the road. Garbage-picking was kind of a hobby of mine. I was constantly amazed at some of the cool stuff people threw out.

Following habit, and cursing as I sliced my pinkie on the Entertainment page, I flipped the newspaper open to the horoscope section. Against my better judgment, I felt optimism rear its stupid head.

The cosmic spectrum is nearly aligned with Jupiter and you will begin to reap the benefits today. Your luck is changing!

Tell that to my poor alarm clock. But wait, there was more.

Last time I read something true love-related was in a fortune cookie. It said, "Your true love will bring you joy and happiness." That was the night I found Brent Hall, my boyfriend of fourteen months,
boinking my Journalism professor on my living room couch.

I quit taking relationship advice from baked goods that day, but I still hadn't quite kicked the habit of playing the Massive Millions lottery. You're not supposed to bet more than you can afford to lose, and at $2.00 per week, I had a borderline gambling problem, but I couldn't help myself. Someone had to win it, right?

I scanned the back page.

A couple of the numbers looked promising, but I'd have to check the Quick Pick ticket in my purse to rule them out. I lived in glorious anticipation of the day when I would win anything. Even the lowest prize of three dollars would be gratification at this point.

But I didn't have time now. According to the retro cat clock on the wall, whose shifty eyes refused to meet mine, I realized that if I didn't take some drastic measures, I'd be late for a wedding. Resolving to check my numbers later, I trudged to the bathroom like a prisoner on death row.

I dreaded getting ready every day.

Invariably, one of several things would happen: I would snag my nylons, poke myself in the eye with a mascara brush, burn my finger on the curling iron, slip in a puddle of water and bang my shin on the tub, or drop my toothbrush in the toilet.

If all that failed, there were always spills. I would spill nail polish on whatever I'd planned on wearing, spill nail polish remover too near a candle and ignite the tissue box, or spill scalding coffee on myself and let out a string of swears that would make a frat boy blush.

I was relieved, but apprehensive. My hair looked better than I'd ever seen it. It waved softly around my face and the nondescript reddish-brown looked downright auburn, shining with glinting gold highlights. Some eye drops had cured the hung-over look and my perfectly made up eyes were sultry and mysterious. I looked like a vintage Hollywood starlet. I shook my perfectly-coiffed head in disbelief, and the stunning woman reflected in the mirror shook her head back. Yup, it was definitely me.

My dress—that must be it.

I searched every inch that I could see, twisting backward at an impossible angle, sure that somewhere in the powder-blue satin there was going to be a gaping hole, a cigarette burn, or a tear as long as the Mississippi. Nada. The dress wasn't even tucked into the back of my panties.

Really nervous now, I slipped into a pair of high heels dyed delicate blue to match the dress. No one thought the high heels were a good idea, given my coordination skills, but it was Addy's wedding and we didn't want to stress her out any more than necessary. She was already a basket case. One messed-up flower arrangement away from homicidal maniac, actually.  A safe and sensible pair of flats might throw her right over the edge.

Mission accomplished without so much as a broken shoe or a broken ankle, I grew more and more disturbed. As I gathered my keys and clutch purse, I felt like Chicken Little waiting to get squashed by an asteroid-sized acorn. But no ten-car pile-up occurred on the way to the church. Was I destined to pass out during the ceremony? Throw up on the minister? What was the
deal?

So it really came as no surprise that I mowed over the best man in the parking lot.

Now, he lay spread-eagled on the pavement, looking dead. Chance Atkins had been a fixture in my life ever since he and my twin brother, Jack, were both annoying little second graders eating worms and looking up the art teacher's skirt, but I hadn't seen him in almost a decade. Good old loved-me-and-left-me Chance.

He groaned again and cracked open one eye.

My actual name is Paige MacFarlane, but ever since it became obvious that I was the most unfortunate red-headed child ever born, I've been saddled with the nickname, Lucky. I know it's not very original, but Jack started it shortly after I took a tumble into a rusted-out septic tank in our back yard when I was three and it stuck.

"I see that fancy college in Chicago didn't make you any smarter. Still haven't learned to look both ways before you cross the street?"

"Gosh, I missed you, too," Chance muttered and tried to struggle into a sitting position.

I ignored the little pricks of guilt needling at my conscience and bent down to help him. I gripped one arm, trying not to notice the muscles snugly encased beneath his tux, and hauled upward.

He yelped and turned accusing green eyes on me.

"I didn't pull that hard," I shot back and let go. He sagged back against the chrome fender.

"No, but you did hit me with a big
freakin' car. Isn't that the same one you were driving in high school?" he asked, looking up toward the Buick's hood ornament, cupping his injured shoulder protectively. "It looks different."

Well, duh, it had better look different. I'd been restoring it for the last 10 years. But the way Chance was eyeballing it wasn't admiring—he was looking at the car like it had just rolled out of a Stephen King book or something. Or maybe he was just remembering what had happened in the backseat and hoping to hell that I didn't.

I was saved from a response when the front doors of the church opened and my mother peeped out. Damn. She'd always liked Chance. She'd mothered the guy more than his actual mother had. Wait until she heard I tried to kill him.

"Lucky, what are you doing? You're supposed to be in there helping Addy get ready. Did you accidentally set something on fire again?"

Mom asks me that stupid question every time I see her, but I love her, so I accept it and try not to let my teeth grit too audibly. Also, it's kind of hard to get angry at a pretty little bird and that's what she's always reminded me of. Chirpy voice, teeny-tiny build, and feathery blond hair make for a look that just cheeps "parakeet." She tends to wear a lot of parakeet-like colors, too, and her floaty yellow, green and blue mother-of-the-groom dress was a prime example.

"No, Mom. Still haven't burned anything down since the bleachers in high
school, and everyone knows that that wasn't my fault. Teachers shouldn't teach kids chemistry if they don't intend for them to use it."

Despite the pain in his shoulder, Chance let out a bark of laughter.

"Mom," I sighed and braced myself. "I just hit Jack's best man."

Pretty Little Liars by Sara Shepard
Timecaster: Supersymmetry by Konrath, J.A., Kimball, Joe
Latitude Zero by Diana Renn
Where the Lost Things Are by Rudy Rucker
Blessed Fate by Hb Heinzer
Frozen Necessity by Evi Asher
Only in Her Dreams by Christina McKnight
The Ice King by Dean, Dinah
Going Too Far by Unknown
Heat Waves by Carrie Anne Ward
Our partner