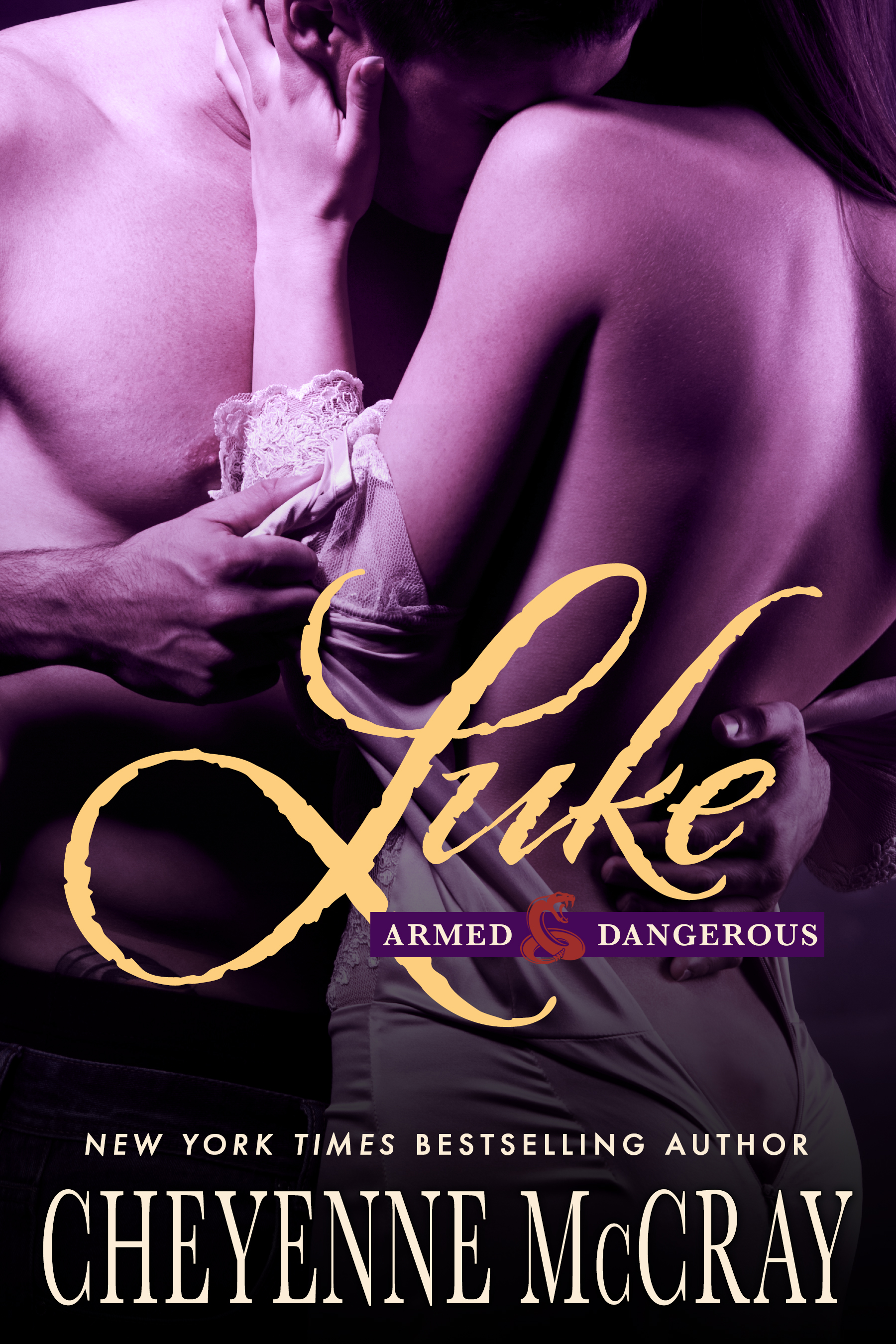 All rights reserved. No part of this e-Book may be reproduced in whole or in part,
scanned, photocopied, recorded, distributed in any printed or electronic form, or
reproduced in any manner whatsoever, or by any information storage and retrieval system
now known or hereafter invented, without express written permission of the publisher,
except in the case of brief quotations embodied in critical articles and reviews.

This is a work of fiction. Names, characters, places, and incidents are products of
the author’s imagination or are used fictitiously. Any resemblance to actual events,
locales, or persons living or dead is entirely coincidental.

Cover by Scott Carpenter from
http://www.pandngraphics.com.

Luke: Armed and Dangerous
was published in print only with St. Martin’s Griffin.
Luke
has its foundations in a novel titled
Wildcard
that I wrote years ago for Ellora’s Cave. If you read that short novel, you will
find this endeavor different. This novel is almost twice as long as the original book
and richer with more action, adventure, and mystery.

You will be glad to know that you’ll find “hot” scenes just as memorable as before
(yes, that hot tub scene and Luke’s chaps are as sexy as ever!), and you’re in for
a lot more danger and intrigue.

Along the lines of change, much has changed within the government since I originally
wrote the shorter novel,
Wildcard,
referred to above. Under the Department of Homeland Security, agencies and departments
have been reorganized and restructured. I hope I have accurately reflected some of
those changes in this novel.

Thanks to all of you Armed and Dangerous fans—the cowboy in the hot tub and the cowboy
in chaps are for you.

“Three kids with penny-ante possession charges across the last year. All from Cochise
College—and not a one of them over nineteen.” Clay Wayland’s voice was harsh and tight
over the phone. The county sheriff sounded way rattled, and way past pissed as he
continued. “We found the remains on a tip, in an old warehouse. The place has been
shut down for two decades, but the vat of lye was new.” Wayland paused, and Drug Enforcement
Agency Special Agent Luke Denver gripped his miniature secure cell so forcefully he
was afraid he’d crack the battery. Most of the road between Douglas and Bisbee was
reasonably straight and flat, which was a good thing, since his mind had gotten stuck
on three dead teenagers who would never come home for Christmas break.

No doubt the kids were running drugs, probably small stuff, maybe to the campus or
even to local high schools. It was a common way to make extra bucks these days—stupid
as hell, but they didn’t deserve to get murdered and left to dissolve in a vat of
lye like exterminated rats.

“I think we’ve got ourselves a turf war,” Wayland said. “But who in Christ would be
stupid enough to poach on Guerrero’s territory?”

Denver guided his classic turquoise-and-white ’69 Chevy truck west as fast as he dared
to push the limit. “We must have weakened Guerrero when we took down the cattle rustling
part of his operation near the MacKenna ranch. Had to hurt when we wiped out their
inside contact in local law enforcement. Now some other group thinks it can move in
while Guerrero’s cartel is distracted.”

“Perfect.” The sound of Wayland smacking something with his fist made Denver wince.
“Fucking perfect. This little Christmas charity bash you’re headed to better turn
up some good intel, or a shitload more people are gonna get dead in Douglas before
New Year’s Day.”

“I’ll call Rios when it’s over, and he’ll be in touch.” Denver punched off and tucked
the small cell into its hiding place in his black duster. His gut churned as he covered
the last few miles into town, then drove the truck up the winding rain-soaked street
and into the last remaining parking spot below Nevaeh’s Bed-and-Breakfast.

Nevaeh’s was situated just off Main Street in Old Bisbee, on one of the sloping hills
that reminded him of San Francisco. He’d heard that at one time, Bisbee had been called
little San Francisco. Under normal circumstances, he’d enjoy the view.

He shifted into first, cut the engine and the lights, and firmly set the parking brake—he
sure as hell didn’t want that truck taking a journey of its own. The old Chevy had
been his grandpa’s pride and joy, and shortly before he died, the old man had given
it to Luke. He didn’t have much that mattered to him other than his job and that old
Chevy.

Luke sat for a second or two, reminding himself of the basic details of his cover
ID of Luke Rider.

Rider.
Who the hell came up with these undercover names?

Had to be some soap-opera-obsessed technician in Accounting.

For better or worse, whoever named him, he was Luke Rider, ranch foreman on the Flying
M. He worked for Skylar MacKenna Hunter and her new husband, Zack Hunter. Zack was
an Immigration and Customs Enforcement—ICE—agent who recently moved back to Douglas,
his hometown.

Thanks to the cattle rustling bust, Zack and Skylar knew about Luke’s real identity
and purpose, but they were one hundred percent on board with helping him continue
in his role. With any luck, the ongoing and intense joint efforts of just about every
local and federal law enforcement agency in the region might yield enough intel, leads,
data, and arrests to bring down Guerrero’s operation.

As he reached for the Chevy’s door handle, Luke caught the familiar vibration of his
phone. It was powerful enough that he felt it from within the hidden pocket in his
specially designed gun holster sewn to the inside of his duster. He reached under
the black duster, slipped the phone out from below his firearm, and checked the caller
ID.

It was his partner, Cruz Rios, who’d managed to get himself hired on as a ranch hand
at Coyote Pass Ranch about a week ago. Rios was busy getting info on Wade Larson,
owner of Coyote Pass, among others in the area—rancher, lawman, and cowhand alike.

Coyote Pass Ranch bordered the Flying M, and after that came a short string of border
ranches also owned by longtime Douglas ranchers. All of them would eventually have
to be investigated.

“Denver,” Luke answered in his slow and easy Texas drawl. Luke’s and Rios’s cell phones
had such sensitive reception that he could hear, as clear as day, cows lowing in the
background and the chirrup of crickets.

Luke pressed the phone harder against his ear. “Yeah?”

“I’ve got cut fences and footprints,” Rios said, “but get this— the tracks lead onto
the ranch, not off it. It’s not illegals. Wrong direction. And it’s not Guerrero mules,
either. These guys didn’t seem to know where they were going, or maybe they weren’t
sure about what they were doing.”

Rios coughed, and Luke heard him spit on the ground. Not a good sign. Rios only spit
when he was worried.

Luke’s partner continued. “When I followed the trail, I found blood—a lot of it, but
no body.”

“Safe in his house. All the hands, too.” Rios paused, and Luke could almost smell
the man’s frustration over the encrypted digital connection. “Looks like the bastards
turned on one of their own. We may never find what’s left of him—or her. But I think
this makes Larson a less likely target for our investigation. Even an idiot wouldn’t
kill somebody on their own spread and leave the evidence in plain view.”

Luke didn’t like Larson, especially after he’d watched the man try to possess Skylar
MacKenna when she didn’t want him, but he knew Rios was right. Skylar had been a suspect,
too, way back before the rustling investigation exploded, but Luke knew she was clean.
Larson had helped them bring down the cattle-rustling operation along with bringing
down the rogue deputy running it— and Larson was probably clean, too.

Luke gave Rios the short on the dead kids the sheriff had discovered in Douglas, and
listened to Rios swear for a full thirty seconds before the words came out of his
mouth. “Turf war.”

A shitload more people are gonna get dead before New Year’s Day
... “Call the sheriff’s office and our field office—get some extra officers out there
to search Larson’s ranch and the surrounding area,” Luke said. “See if you can find
where they dumped the body. We need some clue who’s moving in, and why they think
they can start a war with Guerrero’s cartel and win.”

“We need to take down the rest of Guerrero’s operation, and right now,” Rios said.
“That’s the fastest way to find out who the new players are. You get into that charity
party and make nice with Francisco Guerrero. And don’t shoot the fucker unless he
draws on you first.”

Luke glanced through the rain-speckled windshield, to the upper story of Nevaeh’s
B & B, and saw a woman’s curvaceous silhouette pause in front of the sheer curtains.
Two floors below, in the living room window, a second outline appeared, this one tall
and heavily muscled, topped with an unmistakable hat. Luke couldn’t see the hat, but
he could call the make and model—O’Farrell, a Cheyenne Pinch, probably black, pure
beaver, and with a beaded edge.

That hat cost more than most people made in a month.

And Luke Rider had been helping to investigate the bastard wearing it for the better
part of a year.

The youngest son of the worst drug lord ever to cross the border.

Francisco Guerrero was a relatively new player in the family operation, brought into
the fold by his two older brothers a little over three years ago, when the old man
died.

Guerrero, the youngest, had a pre-law degree from Cornell, an impeccable set of American
manners, and a thin but glossy patina of respectability thanks to owning a string
of auto dealerships throughout Cochise County. He was slowly buying up businesses
and property in the Douglas-Bisbee area, digging himself and his family operation
so deep into Douglas that it would be pure hell rooting him out.

Since Guerrero had come to Douglas, the drug trade volume had doubled, never mind
the body count. New ideas, new methods of illegal operation all the law enforcement
agencies were just beginning to sort out—the bastard was a real game changer.

Luke got out of his truck, all too aware of the weight of his Glock against his leg.

“Look out, sugar,” he said to the woman in the upstairs window, then glanced back
at Guerrero’s outline. “Wouldn’t want you to get caught in the crossfire.”

Trinity MacKenna peeked through the bedroom’s filmy curtains and stared out into the
drenched December evening. Goose bumps pebbled her skin, the colorful glow of Christmas
decorations on each of the power poles somehow mesmerizing her.

The sight brought back countless memories of her childhood, of celebrating the holidays
with her sister, Skylar, and of her parents before their mother died.

There were some not-so-happy times after cancer stole their mother away from them.
Then there had been some worse times in her teen years when she tried—and failed—to
live up to her beautiful, popular, older sister’s reputation and successes, but Trinity
preferred to think about joyous days, or at least the warm and happy moments.