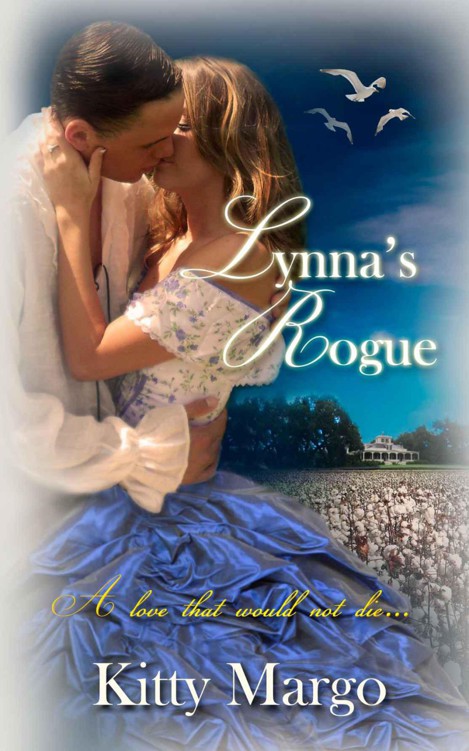 This story is a work of fiction. Names, characters, places, and incidents are either products of the author’s imagination or used fictitiously. Any resemblance to actual events, locales, or persons, living or dead, is entirely coincidental.

No part of this publication can be reproduced or transmitted in any form or by any means, electronic or mechanical, without written permission of Kitty Margo.

T
he amount of money displayed before Joshua was staggering. Even to a man of his considerable wealth
,
the sum repres
ented no small purse, and
it was more coin than his entire cargo of cotton would bring when a
uctioned to the highest bidder.
At least three Atlantic crossings would be required, bringing the white fleecy treasure from the South to the good European people who were willing to pay almost any price to obtain it, to equal the amount now offered.

On the other hand, only a fool would fail to recognize that such an e
xorbitant amount would not
be discussed were a great deal of risk and potential danger not attached to the proposal. Would he be asked to turn marauding pirate, thieving highwayman or bloodthirsty assassin?

The answer to all
these questions stood before him in the form of one Nathan Rhodes. A man rumored to be the wealthiest in all of France, and one who appeared most eager to put an end to Joshua's vivid speculations.

“It is quite simple, Captain Jordan. You will be my daughter's protector,” Nathan Rhodes stated as if it were the only pressing matter in the whole of the universe. “A physical protecting presence every moment of every day until my daughter is safely delivered to my sister in
America. She must never be out of your sight, not even for the time it takes to bat an
eye. On this I must have your solemn oath as a gentleman, sir.”

“Why me?” Joshua
wondered
aloud.

“Because I have it on good authority that not only
are you a man of your word, but that you are also fiercely loyal to those in your care. While I realize that you have never even met my daughter and could therefore feel no sentiment toward her, I also realize that with the proper amount of persuasion you could at least feel obligated to protect her as though she were… say… your very own sister, and see that no harm befalls her.” He paused as if waiting for a reaction. When none was forthcoming he continued undaunted, a man obviously accustomed to having his way in all matters. “Now Captain Jordan, if you will give me your word as an officer and a gentleman that you would be willing to forfeit your own life for the safety of my daughter's, then all that I
hold before you will be yours.

“Forfeit my life! Now hold on just a minute, Mr. Rhodes!” At twenty and seven years of age, Joshua was neither ready nor willing to die, especially for a complete stranger. “Perhaps you had better enlighten me as to precisely what it is your daughter needs protecting from, and why, sir?”

Nathan Rhodes motioned to the money, breathed a pained sigh, and sat wearily down in the chair Joshua offered. “Over the years, Captain Jordan, I have amassed a sizable fortune. I was visiting here from the red clay of Georgia, just after completing my education, when I was introduced to my future wife and soon entered into a very profitable partnership with her father. Without even working to achieve it, the wealth seemed to be deposited in my lap. This is but a mere pittance compared to my vast holdings, I assure you. When my wife's parents went to their heavenly reward, I was also bequeathed their rather immense fortune. However, I assure you that wealth is not important at the moment. All my riches mean nothing without my precious daughter to share them.”

Again he paused as if expecting a reaction from Joshua, but got none. “To get to the point, Captain
Jordan, I have received numerous threats over the years. There have been two blatant kidnap attempts with the last coming only two days ago. They came too close this time, much too close. If not for a few minor miscalculations on their part
,
they would have succeeded in kidnapping my daughter and holding her for ransom.”

His voice shook and his eyes clouded over with pain as he added,
“
Only the Good Lord above
knows what harm the miscre
ants might have done before
rele
asing her…if they released her.
Therefore, although it pains me beyond measure, I feel it would be detrimental to my daughter's welfare to remain in France. I must relinquish her until these criminals can be captured and brought to ju
stice. My justice!” He slammed
his clenched fist on the table hard enough to make
a few of
the coins flip.

Joshua noticed a tear slip from the older man's red swollen
eyes. This decision clearly
weighed heavily on Nathan Rhodes
’
mind as expressions of deep anguish flickered across his haggard face. “I have the wherewithal to purchase anything my heart desires, Captain Jordan. Anything in the world I wish for, except ha
ppiness. Why, in all
my daughter’s seventeen years I have never missed a single breakfast with her or spent a solitary night without her peacefully slumbering in the room juxtaposed to mine. Were I not in fear of losing her forever
,
this separation would be unfathomable.”

“I
can certainly
appreciate your concern, sir.” Contemplating his words, Joshua strolled to the window to gaze across the placid ocean waters. “
However, I can assure you that your daughter would have no greater need than a female traveling companion.
She would come to no harm
on
board
my ship.
As you are aware, t
he
Windjammer
is a
cargo vessel and
we only have accommodati
ons for two passengers
.
On this particular voyage both passengers have sailed with me previously and I can vouch for their safety, as well as my
crew,
whom I would trust with my life. But rest easy that they would
be alerted to the situation at hand and every possible precautionary meas
ure would be taken to assure your daughter’s
safe voyage.
I would not think it too difficult a task
to keep
a vigilant eye on her
.
”

“A traveling companion!” Nathan roared, leaping from his chair to stand before a stunned Joshua like a man possessed with hidden demons. “Have you gone completely daft, man?” His hands on Joshua's shoulders jerked as if he were trying to shake some sense into a simpleton. “It is their intention to abduct my daughter and hold her for
ransom! Why, they might
even
resort to murder
if their kidnapping plot were to somehow go awry! A hell of a lot of good a traveling companion would do her!”

Ta
king a deep breath in an apparent
attempt to set
tle his nerves Nathan continued.
“Captain Jordan, please allow me to impress upon you the seriousness of this situation. My daughter must have a bodyguard, someone to protect her from any and all adversaries encountered along the way. Someone who will be by her side by day, and especia
lly at night, when these brigands
are most
likely to strike.” Nathan sighed.
“Understand this is not a pleasure cruise, sir. If it were I would build her the most opulent and lavishly bedecked vessel to ever navigate the seas. I would see it equipped with every convenience and have every extravagance known, or even considered, in the shipping industry at her disposal to take her to any destination her heart desired. But the thieves would expect my daughter to travel in such a manner. Concealing her on a cargo vessel will be the safest
and least conspicuous means
for my daughter
to
reach her destination
unnoticed
.”

Turning to face Joshua
, Nathan’s eyes swept
his muscular frame. “I put complete trust in you Captain Jordan to be the gentleman and defender my daughter needs. Nonetheless, should she come
to any harm while in your care…
” he paused and
glanced out the window at the calm, sparkling water, and
Joshua noticed his knuckles whiten under the pressure of hi
s clenched fist.
“
May the
G
o
od
Lord
be with you.”

Nathan's meaning was all too fully understood as their eyes locked. Should any harm come to his cherished daughter while under Joshua's protection, he would
be signing his own death notice
. And Joshua knew beyond a shadow of a doubt that Nathan
Rhodes would search heaven and h
ell until the deed was accomplished.

“Do we have a deal, Captain? If you can ag
ree to my terms
, may I suggest preparations get underway to sail at your earliest convenience? I wish for my daughter to be out of this Godforsaken country on the next high tide.”

“We have a deal, and you have my word as a gentleman that I will do everything in my power to see your daughter reach
es
her destination unharmed.” It had been some time since Joshua had bestowed upon his crew a hefty bonus for their years of faithful service. After but a moments thought, the decis
ion was made to accept the
man’s challenge and split
half
the bounty among his crew.

“Before I go there are a few things I feel obliged to tell you about Lynna’s unique and decidedly unorthodox upbringing, Captain Jordan. If you are to understand my daughter, you must first understand her rather exceptional background.” Nathan massaged hi
s temples
. “She has lived a sheltered life of relative seclusion due to the abduction attempts. She has no close friends and only a few acquaintances other than the very select household staff. Whenever she left home, which was not often I must admit, she was always heavily chaperoned.”

“The consequences of this sequestered life are that Lynna knows very little of what goes on in the world around her. The Chateau is her world. A world filled with every available luxury. A wo
rld in which every indulgence i
s at her beck and call, except friends, children to play with, and young ladies her own age with whom to share intimate secrets. I could not risk allowing outsiders into our private world. We never knew who could be plotting against us.”

He shook himself as if
to rid his mind of a painful
memory. “I will tell you this, Captain Jordan. If you find my daughter lacking in worldly ways, and I am confident that you will, you must bear in mind that it was through no fault of her on. It was forced on her through necessity an
d my constant fear for her well-
being.”