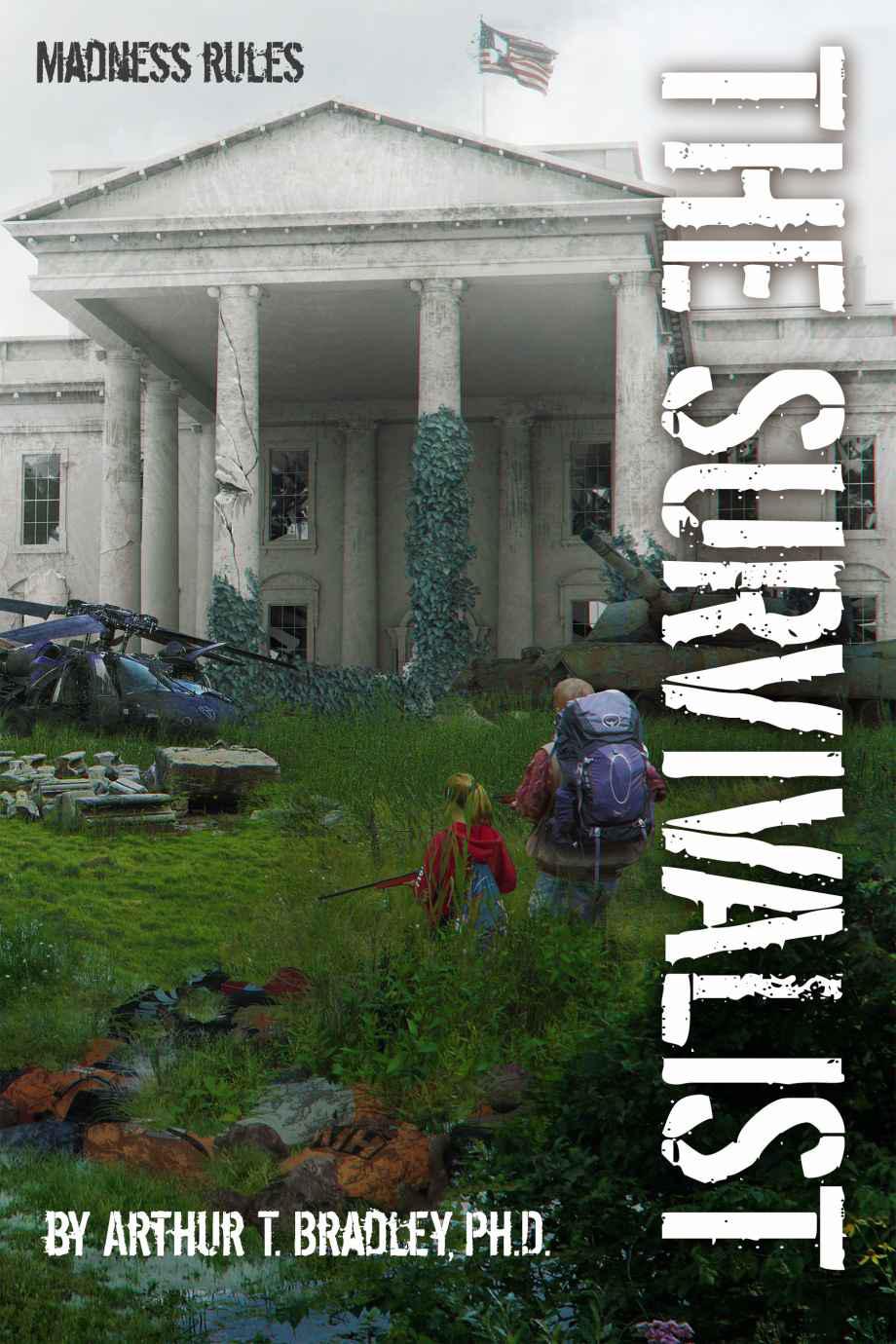 Handbook to Practical Disaster Preparedness for the Family

Process of Elimination: A Thriller

Available in print and ebook at all major resellers or at:

Author:    Arthur T. Bradley, Ph.D. Email:    [email protected] Website:    http://disasterpreparer.com All rights reserved. No part of this book may be reproduced or transmitted in any form or by any means without prior written permission from the author.

Illustrations used throughout the book are privately owned and copyright protected. Special thanks are extended to Siobhan Gallagher for editing, Nikola Nevenov for the illustrations and cover design, and Parkinson Myers and Vanessa McCutcheon for proofreading.

Madness is a general term used to describe a wide spectrum of abnormal behaviors, some dangerous, others that might even be considered colorful. Regardless of whether a person is hearing the voices of demons or going out on neighborhood watch wearing Spiderman underwear, insanity threatens to suppress rational thought in favor of the absurd.

Primitive cultures sought their own cures, the most popular of which involved boring holes in the heads of those afflicted to allow devils to escape. Greeks claimed that an excess of black bile was the underlying cause of irrational behavior. The Romans recognized that the mentally ill possessed
non compos mentis
, that is, “no power of mind.” However, it wasn’t until the eighteenth century that Europe’s civilizations truly recognized insanity as a medical condition, warranting seclusion and care in special asylums.

Medical experts believe that insanity can be caused by a host of different factors. Biological causes include nerve cell malfunctions, genetics, infections, injury, and toxins, to name but a few. Psychological factors might include severe emotional trauma, the loss of a loved one, or neglect. Environmental stressors can also trigger mental illness, perhaps rooted in a dysfunctional family life, low self-esteem, pressures from societal expectations, or substance abuse. Regardless of the cause, the results are often the same—a partial or complete withdrawal from reality.

Powerful nobility seem particularly susceptible to such afflictions. Some of the most noteworthy examples include King Charles VI who was convinced he was made of glass and Emperor Justin II who insisted he be wheeled around on a mobile throne while trying to bite his servants. Such leaders rarely had a peaceful exit from this world. Emperor Caligula, arguably the craziest of them all, was murdered by his own guard and left in the street for dogs to eat. Prince Sado, a Korean prince who murdered and raped his subjects on a whim, was nailed inside a rice chest by his father. And King Ludwig II, who spent his country’s riches building fairytale castles, was found floating face down in his own pond.

Neither have modern civilizations escaped the painful influence of leaders who were arguably mad. Germany’s Adolf Hitler, North Korea’s Kim Jong II, Iraq’s Saddam Hussein, Russia’s Joseph Stalin, and Cambodia’s Pol Pot might all be eligible for membership in this less than prestigious club of lunatics. When the insane take power, all those under their control must endure cruelty and injustices. It is often only through the actions of a few brave individuals that reason can once again be found. Such bold men and women act with great risk to themselves and their loved ones, but without their sacrifice, entire generations would be doomed.

For a full week, Mason mourned the death of his beloved, Ava, never once leaving his remote cabin in the Blue Ridge Mountains. He used the seclusion to reflect not only on the short time they had shared together, but also on the revenge he had exacted on those responsible. With Agent Sparks and his murderous soldiers dead, there was little vengeance left in Mason’s heart. Revenge was a fire that burned hot, but once satisfied, it quickly faded, leaving only painful memories in its wake.

That wasn’t to say that he had forgotten about General Hood. On the contrary, Mason understood that it was his duty to ensure that General Hood and President Pike, should he be involved, paid for their deeds. Before justice could be dished out, however, there was still much to be learned.

He had discovered from Jack Atkins, a prepper who spent much of his time on the amateur airwaves, that General Hood was currently serving as the Head of Special Operations Warfare. That meant that Hood worked closely with the highest levels of government. It also helped to explain how he might have had access to chemical weapons and tactical teams to do his bidding. What it didn’t explain was why he had ordered a sarin gas attack on the Federal Law Enforcement Training Center in Glynco, Georgia. Neither did it offer insight into why his jackbooted thugs were tracking down the late president’s daughter, Samantha Glass. Those answers would have to come from General Hood himself.

Unfortunately, Jack had been unable to find anyone who knew of the general’s whereabouts. President Glass and other high level officials had fled Washington shortly after the Superpox-99 virus hit, and it was anyone’s guess where they had gone to ground. No one in the administration had yet to broadcast where the government was being stood back up, nor was there a good reason for them to do so. Telling a nation of needy people where their well-fed leaders were hiding was all but inviting an uprising.

Mason’s only connections to General Hood had been Agent Sparks and the mercenary, Nakai—both now dead by his hand. Nakai had confessed that he intended to deliver a shipment of military rifles to Lenny Bruce, the leader of a large militia in Lexington, Kentucky. From Nakai’s account, it sounded as if General Hood was a traitor working against the government, but his motives remained unclear. Agent Sparks had also admitted that Hood had been behind Ava’s murder, albeit indirectly as part of their hunt for Samantha.

Despite Mason’s many unanswered questions, the next logical step seemed rather obvious. He would need to find Lenny Bruce and convince him to shed light on his arrangement with General Hood. Perhaps Lenny could even lead him to the general or, at the very least, help to lure the man out into the open.

While it wasn’t quite yet a plan, it was a reasonable next course of action, and for now that was enough. Mason had always believed that in the absence of a strategy, it was best to stay on the move, putting one foot in front of the other until things became clear.

Mason awoke to the morning sun spilling in through the cabin’s bedroom windows like rays of pure gold. Bowie, his loyal Irish wolfhound, lay curled up on the floor, staring up at him with one blue eye and one brown eye.

“You let me sleep for a change.”

Bowie had a bad habit of waking Mason in the night, whining to get on the bed. Given the dog’s enormous size, however, sharing the double bed was all but impossible.

A loud knock sounded on the cabin’s front door.

Before Mason could say a word, Bowie took off into the living room, barking. Mason sat up and reached for his Wilson Combat Supergrade. The worn wooden grips felt smooth, almost as if they had been molded to perfectly fit his hand. Having saved his life more times than he could count, Mason now considered the .45 caliber, semi-automatic pistol to be one of his most prized possessions.

He swung his feet over the edge of the bed and began to dress. Before he could finish, the knock sounded for a second time.

“Marshal? You in there?”

Mason recognized the voice as that of Vince Tripp, his friend and fellow lawman from the small town of Boone.

“Give me a second,” he hollered back.

Once he had his clothes on and hair generally smoothed down, Mason went into the living room and peered out through the front window. Vince and a striking young woman stood on the porch. Vince’s sheriff’s cruiser sat in the drive next to Mason’s black Ford F-150. His pistol remained holstered, and he didn’t appear to be under any duress.

The woman was probably close to thirty, trim, but not to the point of being scrawny. She had long red hair pulled back into a pony tail and a few freckles dotting her face. She was dressed in khaki hiking pants, a light denim shirt, and trail boots. As far as he could see, she was unarmed.

Mason stuck the Supergrade in the back of his waistband and eased the door open. Bowie immediately pressed his way through and began scrubbing against Vince, whining for attention.

Vince bent over and stroked the animal’s head.

“You ever pet this dog, Marshal?”

Vince laughed and extended his hand.

Mason shook it and offered a friendly smile.

“And you, my friend.” He turned to find the woman staring at him, clearly sizing him up. “Ma’am,” he said, nodding to her.

She pressed her lips together and returned the nod.

Mason turned back to Vince.

“What brought you out my way?”

Vince gave Bowie one final pat on the side before the dog took off around the cabin to relieve himself.

Mason looked back over his shoulder as if to make sure the cabin was suitable for visitors. It looked like it always did, cozy but stout enough to take anything Mother Nature might throw at it. He swung the door open and stepped aside.

“Make yourselves comfortable,” he said, motioning toward the couch. “Either of you want a cup of coffee?”

Vince and the woman both nodded.

Mason went to the kitchen, poured a pot of water into the coffee maker, and switched the unit on. It began humming as electricity flowed from a small inverter wired to a car battery sitting on the floor.

“I thought you had a fancification generator up here,” said Vince.

“Whatever,” he said with a chuckle. “All I know is it sure looked fancy enough.”

“That it is, but the burn box has to be refueled each morning. The inverter here helps me to get by until I can fire it up.”

“Lord knows we sure appreciated that little setup down in Boone. We’ve come a long way since then, aye, Marshal?”