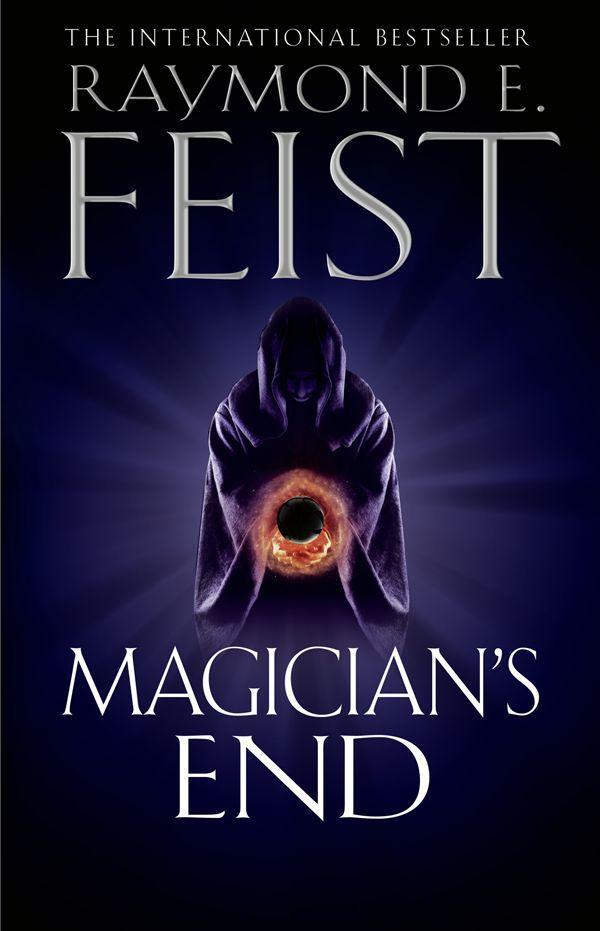 By the same Author

This final book in the
Riftwar Cycle
, after thirty successful years of writing, is dedicated to you, the reader. Without your support and enthusiasm, I never would have achieved this milestone. 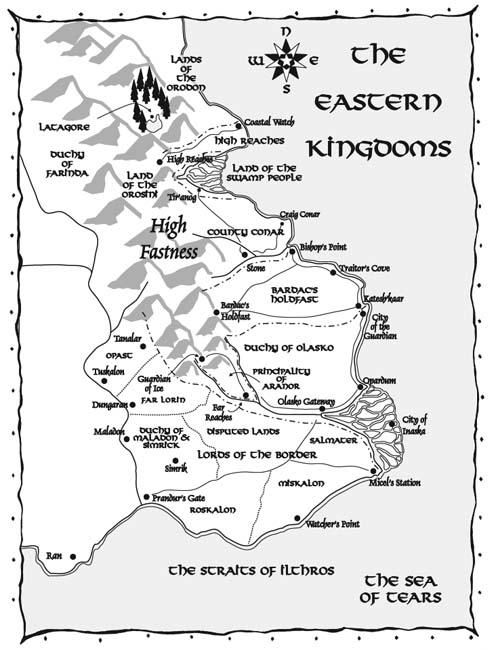 A light so brilliant it was painful bathed Pug as he instinctively threw all his magic into the protective shell Magnus had erected around them just a moment before. Only Magnus’s anticipation of the trap had prevented them all from being instantly vaporized. Energy so intense it could hardly be comprehended now destroyed everything at hand, reducing even the most iron-hard granite to its fundamental particles, dispersing them into the fiery vortex forming around them.

The light pierced Pug’s tightly shut eyelids, rendering his vision an angry red-orange, with afterimages of green-blue. His instinct was to shield his face, but he knew the gesture would be useless. He willed himself to keep his hands moving in the pattern necessary to support Magnus’s efforts. Only magic protected them from conditions no mortal could withstand for even the barest tick of time. The very stuff of the universe was being distorted on all sides.

They were in what appeared to be the heart of a sun. In his studies, Pug knew this to be the fifth state of matter, beyond earth, air, water, and fire, called different names by various magicians: among them, flux, plasma, and excited fire. Energy so powerful that it tore the very essentials of all matter down to their very atoms and recombined them, repeating the process until at some point the plasma fell below a threshold of destruction and creation and was able finally to cease its fury.

Years of perfecting his art had gifted him with myriad skills, some talents deployed reflexively without conscious effort. The magic tools he used to assess and evaluate were overloaded with sensations he had never experienced in his very long lifetime. Obviously, whoever had constructed this trap had hoped it would be beyond his ability to withstand. He suspected it was the work of several artisans of magic.

In his mind, Pug heard Miranda asking,
Is everyone safe?

Nakor’s voice spoke aloud: ‘There’s air. We can talk. Magnus, Pug, don’t look. It will blind you. Miranda, we can look.’

‘Describe what you see,’ Magnus said to the two demons in human form.

Miranda said, ‘It’s an inferno hotter than anything witnessed in the demon realm. It has destroyed a hundred feet of rock and soil below us and we are afloat in a bubble of energy. Farther out from where we stand, it’s turning sand to glass. A wall of super-heated air is expanding outward at incredible speed, and whatever it touches is incinerated in moments. As far as my eye can discern, all is flame, smoke, and ash.’

Less than a minute ago, the four of them had been examining a matrix of magic, which was obviously a lock, but had turned out to be a trap.

Ancient beings of energy, the Sven-ga’ri, had been protected in a quiet glade atop a massive building built by a peaceful tribe of the Pantathians, a race of serpent-men created by the ancient Dragon Lord, Alma-Lodaka. Unlike their more violent brethren, these beings had been gentle, scholarly, and very much like humans.

Now that peaceful race had been obliterated. It didn’t matter to Pug that they had been created by the mad vanity of a long-dead Dragon Lord as pets and servants: they had evolved into something much finer and he knew he would mourn their loss.

Pug kept his eyes closed, focusing on his son’s protective shell. ‘You anticipated—’

Magnus finished his sentence for him: ‘—the trap. It was just one of those moments, Father. The hair on my neck and arms started to tingle, and before I knew it the protective spell was cast. I had created a word-trigger, a power word. I just had no idea the trap would be so massive. Without your help and Moth— Miranda’s …’ He let the thought go unfinished.

Pug and Miranda both chose to ignore his slip. She wasn’t his mother. She was a demon named Child who was in possession of all his mother’s memories, but Child seemed completely contained within Miranda. It was easy to forget she wasn’t Miranda; the experience was unnerving for all of them.

Only Belog the demon, now to outward appearances Nakor, seemed untroubled by his situation, and that was wholly in keeping with who Nakor had been in life: a man of unlimited curiosity and a delight in all mysteries. His voice held a note of awe. ‘This was an unspeakably brilliant trap, Pug.’

‘Whoever fashioned this understood it could be investigated only by a very limited number of people,’ said Nakor. ‘First they would have to get past the Pantathians, either by winning their confidence or by brute force. If they reached the matrix, few magic-using demons or lesser magicians, or even very well schooled priests, could have begun to understand the complexities of this lock, or trap, or however you think of it.’

Pug was silent for a moment, then said, ‘No. It was Magnus. I sensed the lock, but only assumed there was a trap involved. By the time I returned from the Academy, he had already easily won past barriers that would have proved a challenge to me.’

Miranda cut him off. ‘That was no hollow praise. I have all your mother’s memories and skills, Magnus, but you … you are the best of both of us, I mean both your mother and father.’

Nakor chuckled. ‘You’ve long denied it, boy, but in the end, you are beyond us. All you need is a little more experience and age.’

‘I find it incongruous to be laughing in the midst of all this chaos,’ said Magnus.

Suddenly there was an explosion of sound, as if they were being slammed by a hurricane of wind. ‘Don’t look,’ reminded Nakor.

‘What was that?’ asked Pug.

‘I think that was air returning.’ After a moment, Nakor added, ‘The explosion … I don’t know if I can describe what I’m seeing, Pug. Miranda?’

After a pause she said, ‘It was more than just light and heat. I felt … shifts, changes … displacement. I’ve never encountered its like. I’m not certain if it’s even what we would call magic.’

Nakor said, ‘It’s not a trick, or at least not one I can imagine. Everything changed.’

‘You can open your eyes now, but slowly.’

Pug did so and at first his eyes watered and everything was blurred. A strange vibration, high-pitched and fast, almost a buzzing, could be felt through the soles of his sandals. He blinked away tears and found himself semi-crouched within the energy bubble his son had erected an instant before the explosion.

Beyond the shell everything was white to the point of there being no horizon, no sky above or ground below, nor sea beyond a shore. As his eyes adapted to the brilliance he could see faint hints of variation, and after another moment faint shifts in the whiteness, as if colours were present beyond the boundary of the bubble.

They floated above the bottom of a crater thirty or forty feet below them. The only remnants of earth and rock were beneath their feet, encased in Magnus’s sphere.

‘The spell is, and we’d better be ready for a rude landing when it releases. I can’t keep this sphere intact and move it.’

‘Maybe I can help,’ said Miranda. She closed her eyes and the sphere slowly settled to the bottom of the crater.

Everything was still confounding to the senses as energies continued to cascade around them, every visible spectrum shifting madly outside the bubble. Pug pushed Magnus’s protective sphere gently and it expanded enough that they could all stand easily. After a few more minutes passed, details in the crater wall became recognizable. Slowly, the blinding light faded and varying hues of ivory, palest gold, a hint of blue emerged. At last the brilliance disappeared.

They blinked as their eyes adjusted to natural daylight, which was dark in comparison to what they had just endured.

Pug looked around. They were perhaps fifty feet below the surface, surrounded by what appeared to be glass.

‘Someone tried to kill us,’ answered Nakor, without his usually cheerful tone. ‘We need to get out of this hole and look around.’

‘Is it safe by now?’ asked Magnus.

‘Be ready to protect yourself and we’ll find out,’ said Nakor. ‘I think it’s going to be very hot for you two.’

Always on My Mind by Susan May Warren
A Hidden Place by Robert Charles Wilson
Where Seas and Fables Meet by B.W. Powe
Champion Horse by Jane Smiley
Healer of Carthage by Lynne Gentry
Come In and Cover Me by Gin Phillips
The Signature of All Things by Elizabeth Gilbert
False Lines (Blurred Lines Volume 7) by Wilde, Breena
The Other Cathy by Nancy Buckingham
The Shining Skull by Kate Ellis
Our partner