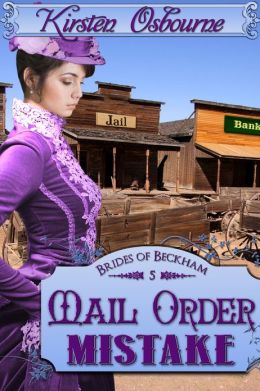 Book
Five
in the Brides of Beckham

This ebook is licensed for your personal enjoyment only. This ebook may not be re-sold
or given away to other people. If you would like to share this book with another person,
please purchase an additional copy for each recipient. If you're reading this book
and did not purchase it, or it was not purchased for your use only, then please return
to
barnesandnoble
.com and purchase your own copy. Thank you for respecting the hard work of this author.

Malinda thinks her life is over after the death of her father and her subsequent eviction
from the only home she’
s
ever known.  She, along with her sister, answers an advertisement for mail order
brides and their lives change.  She agrees to marry a banker in a small town in Colorado,
because she refuses to be afraid of where her next meal will come from ever again.
When she arrives in Colorado, she immediately falls for the handsome gentleman who
picks her up at the train station, but he’s her sister’s fiancé, not hers!

Patrick took a sip of his water, eyeing his brother Wesley over the top.  “I’m sure
you’re wondering why I invited you for dinner.”
They were eating dinner in Patrick’s home just a five minute walk from the bank
where he worked.

Patrick and Wesley were brothers.  Patrick was older by three years, and the two men
looked a great deal alike.  They were both tall with dark hair and brown eyes, but
Patrick, who owned the only bank in the small town of Gammonsville, Colorado
was slimmer while Wesley was more muscular
.

Wesley nodded.  “Usually I just show up.  I didn’t think you even knew how to ask
me to come over.”  He leaned back in his chair with a grin.
Wesley was as happy-go-lucky as Patrick was serious.  In personality they were polar
opposites, but for all the things that mattered, they were alike.

“Yeah, you come over to charm my housekeeper.”
Patrick tried to scowl at his brother, but really he was amused by the way Wesley
sought to charm the housekeeper into inviting him for dinner practically every night.

Wesley shrugged the devil-may-care grin on his face lighting up the room.  “I only
do what I do best.”

Patrick sighed
and got straight to the point
.  “I’m ready to marry.”

Wesley grinned.  “Where’d you find a woman?”
The only available women in town were either too young, too old or too mean.  There
was only one who was too mean, but neither man was willing to even look at her let
alone marry her.

“I haven’t.”  He picked up a small piece of paper from beside his plate and handed
it to Wesley.  It had obviously been cut out of a newspaper
.
Patrick watched his brother’s face carefully as he took the paper and looked down
at it.

Wesley read it aloud.  “Are you lonely?  Do you need a bride?  Brides from the East
are eager to travel West to marry you.  If interested, send a letter about yourself
to Mrs. Harriett Long in Beckham Massachusetts.  Small fee applies.”  His eyes met
Patrick’s.  “Seriously?  You want a mail order bride?”

Patrick shrugged.  “There are no women in the area that are of marriageable age.
I’m ready to start a family.”
And frankly, he didn’t want to have to take the time off work to court a woman.
This would be easier.

Wesley studied his brother carefully.  “Sounds like a good idea.”  He handed the advertisement
back to Patrick.  “I wish I could join you.”

Patrick raised an eyebrow.  “Why can’t you?”
Patrick waited for Wesley to tell him the same reason he always gave him for not
being able to do things.  He’d been frustrated
forever
by his brother’s stance on money.

“Would you do it if you had the money?”

“How much are we talking?”

“I’ve written to the woman.  She said her fee is only ten dollars per bride, but then
you have to pay for their travel expenses, and a small stipend is usually sent to
help the bride with new clothes and anything else she may need before she leaves to
come out here.”

Wesley shook his head.  “I couldn’t
even
afford the train ticket.”

“I’m offering to do it for you.  I wish you’d just let me give you your share of the
money from the gold mine.”
Patrick knew his brother was the most hard-headed human being on the planet,
b
ut he still wished he could convince him.

“It’s not my share.  You paid me for my time in digging.  Why would you give me half
the money from it?”

“I agreed to pay you for your time before we realized you had no gold at all in your
mine.”
Patrick’s eyes were sad as they had the same argument they’d had many times before.
“Why are you so stubborn about this?”

“Why are you so generous?  I don’t want your money, big brother.”

“Fine.  May I pay your bride’s expenses?”
He desperately wanted his brother to have a wife at the same time he did.  He loved
his brother, but it would be nice to be able to eat alone with his wife at least once
during their first year of marriage.

Wesley thought it over for a moment.  “I do want to marry, but I hate the idea of
you footing my bill for it.  How about you pay, and I’ll pay you back, even if it’s
only a dollar a month for the rest of my life.”

Patrick shook his head.  “Fine.  But if you have to miss a payment, I’m not going
to hold it against you.”

“How do you make your living again?”

“I’m the world’s softest banker.  What can I say?  Sob stories break my heart.”
Patrick knew he was terrible with evicting families.  He did everything he could
possibly do to give people another chance, and sometimes just let them live on their
property with no payments.  If he hadn’t had so much of his own money, his bank would
have gone under in three months flat.

Wesley laughed.  “That’s why you’ve never called on me to evict anyone.  I know of
at least three families who should have been kicked out of their homes more than once.”

“Probably.”  He ate a forkful of baked potato
coated with butter
.  “Let’s write the letters after supper.  By the end of the summer, we can be married.
Who knows?  In a year, we may each have babies to bounce on our knees.”

Ellen sighed and nodded, reaching out to hold her sister’s hand.  “He was.”

“You didn’t know him like I did.  You were always so much closer to mother.”  Her
voice caught on a sob.  “I followed him around like a lost puppy for years until he
made me stay inside and help you after mother died.”  She glanced at her sister, who
was also crying.  “I’m still terrible at housework.”

Ellen let out a feeble laugh.  “You’re getting better.”

Malinda shook her head.  “I know I’m not.  You have to tell me how to do everything.”
She blew her nose loudly into her handkerchief, thankful the small group of mourners
from their church had already left and she didn’t have to be delicate about it.  “I
can hoe a row of corn faster than you, though.  And milk a cow?  I can milk four cows
in the time it takes you to do one.”
She knew it wasn’t something to brag about,
but with as good as Ellen was at everything in the house, she had to be better at
something.

Ellen slipped her arm around her younger sister’s shoulders.  “You sure can.  You’re
also a much better seamstress than I am.”

“I am not,” Malinda said in shock.  “What makes you say that?”
She wasn’t better at anything that had to do with “women’s work” than her sister.
Ellen just seemed to do all the things Malinda struggled with naturally.

Ellen steered her sister toward the waiting wagon.  “You just are.  I’m a decent seamstress,
but I’m better in the kitchen.”
Ellen didn’t seem upset or jealous, just matter of fact.  Malinda found herself
wishing for what seemed like the millionth time that she could be more like Ellen.

They walked slowly to the wagon and Ellen drove them home.  It was a beautiful summer
day, and they both wished they were out in it under better circumstances.  “We need
to figure out what
Father
did with the money,” Malinda said.
She’d been thinking about it, and she knew their father wouldn’t leave them with
nothing.  He couldn’t.  He was too good a man for that.

“What do you mean by that?”

“Well,
Father
knew we only had a little bit of food left, so there must be some money somewhere.
Otherwise we wouldn’t have made it through the month.”
She shrugged.  “So there must be money.  You’ll help me look, right?”

Ellen nodded hesitantly.  “We’ll look.”
She obviously thought Malinda was grasping at straws, but she didn’t argue with
her about it.

Malinda sighed.  “I almost feel guilty for worrying about food and money right after
we bury him, but we need to eat.”
She put her hand over her flat stomach.  Just the thought of not having food was
making her hungry, and she’d had a big breakfast just hours before.

“You’re right.  We do.  We have to go on without him, but we’ll both miss him for
the rest of our lives.”

“
I can’t believe he’s really gone.”
Every time she realized she would never see him again, she wanted to cry.  How could
she spend the rest of her life without him to help her make the right decisions?

“I can’t either.  He was our rock after
M
other died.  How are we going to get through this without his shoulder to cry on?”

Malinda took Ellen’s hand in hers.  “At least we have each other.”
She rested her head on Ellen’s shoulder as they drove.  She couldn’t spend the rest
of her life without her sister as well.  No matter what happened, they had to stay
together.

For the next two weeks the sisters tore the house apart, leaving no stone unturned
as they looked for the money they were certain their father must have hidden somewhere.
They cut open his mattress, checked inside his work boots, and even dug up holes in
various places around the farm.  “Where could it be?” Malinda asked near the end of
the second week.

“I’m beginning to think there isn’t any money.”
Ellen shook her head tiredly.

“But there has to be!  What would we have eaten if he’d been alive?”
Maybe he’d planned on hunting.  Or sending them into the woods for berries, which
they’d done from time to time.  Maybe Ellen was right and there really was no money.

Ellen simply shrugged and kept looking, but they found nothing.

Finally Ellen told Malinda it was time to stop looking.  “There’s just nothing here.
We’re going to have to find a way to eat until the dairy pays us on the first.”  She
sat back on the floor with her back to the wall, exhausted.

Empty World by John Christopher
Carolyn Arnold - McKinley 02 - Vacation is Murder by Carolyn Arnold
Sacred Hunger by Barry Unsworth
Noah Primeval (Chronicles of the Nephilim) by Brian Godawa
Gun Metal Heart by Dana Haynes
Claudia's Big Break by Lisa Heidke
Worth the Fall by Caitie Quinn
Prison Throne by T. Styles
Billie Holiday by John Szwed
Blame It on the Shame (Blame It on the Shame: Lou-Lou and Ricardo's Story #1) by Ashley Jade
Our partner