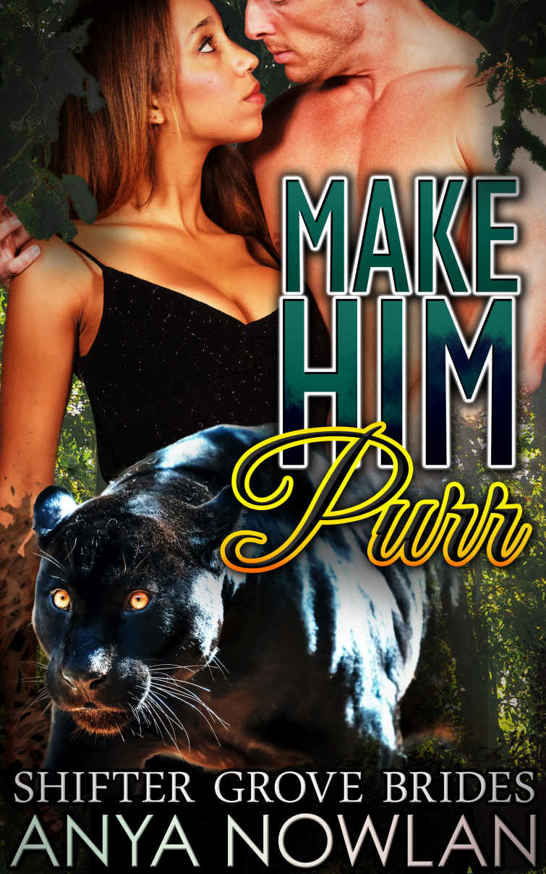 “Come out, come out wherever you are! Here, puss-puss-puss!”

The mocking tone scraped at Sonya’s ear. She was clinging for dear life to the wooden beams running the length of the large living room, hoping and praying that the owner of said annoying voice would move further, faster.

“You sure she’s here, Deke?” another voice asked.

She was almost as if hovering, her hands and legs spread between the two ceiling beams, keeping her well up and out of sight. Her panther growled deep within her, urging her to let it out. She knew she couldn’t – at least not without attracting any attention. As confident as she was in her capabilities, Sonya doubted even she could shift and land on her paws before dropping down from the ten-feet high ceiling.

“I can smell the bitch,” Deke snorted, his voice slightly more distant.

Sonya bit down harder on the black velvet bag she was holding between her teeth just as the lights came on in a corridor next to the living room. She’d been just fine with Tate and Deke walking in on her as long as they’d kept things dark and in her favor, but it seemed her luck was slowly running dry.

Just what I need tonight. Jackals.

Sonya glanced around underneath her, considering the black leather couch just below. She’d used it to scale up to the ceiling when she’d first heard the two men crashing through the front door. Half-relieved it wasn’t Blade and half-horrified that it was his pair of cronies, she’d been weighing her options for a good few minutes now. It was obvious time wasn’t on her side.

“Well, she did live here,” Tate offered, his voice muffled.

“And she was scrubbed out of here with Lysol. If I can smell her here, she’s still here now. You hear me, Sonya? Just come out. I swear I’ll play nice. At least nicer than Blade’s going to if he catches you sneaking dirty,” Deke hollered.

She could see his awkwardly grinning face so clearly in her head. The man looked like he was constantly in the middle of a particularly painful bowel movement. She’d come to know it as the ‘jackal look’. That didn’t mean that he was any less capable of breaking every bone in her body if he got his hands on her. Years of picking on Blade’s simpleton cronies was bound to catch up on Sonya eventually. She just hoped it wouldn’t quite yet.

Sonya’s hand trembled. She shot it a glare, but that wasn’t going to fix anything. Any moment now, her muscles would start cramping, and then she’d tumble down like a wounded bird, ripe for shredding between sharp jackal teeth. Especially when they found out that she wasn’t just nosing around her ex-boyfriend’s lavish digs, but taking a keepsake as well.

Fine mess you’ve got yourself into, Sonya,
she chided herself, feeling her legs start to twitch.

The footsteps moved closer. Mentally, she tracked where they could be. They must have just walked through the bedroom and the master bathroom, and were now making their way through the guest bedrooms. It had been blind luck that Tate and Deke had gone through the living room first, not even bothering to turn on the light as Deke followed his nose. Had he flipped the switch, it would have been pretty hard to miss the curvy, black-clad cat burglar hanging from the ceiling.

Maybe, just maybe, if she was fast, she could scoot out before they got back. The velvet of the bag brushed against her tongue and the cottony texture made her throat tickle. Exactly what she needed – a sneeze or a cough.

With feline grace, Sonya retracted her iron hold and let her body twist in the air, ducking and rolling on the buttery leather as she hit the sofa. She was up on her feet so fast that it was hard to believe she hadn’t just appeared out of thin air. Just as swiftly, her feet were carrying her towards the door leading out onto the porch and the expansive gardens that stretched seemingly forever outside one of Blade’s many homes.

Moonlight bathed the living room, licking at the nooks and corners. The house was decked out. All fine wood and expensive materials. Only the best of marbles and most obscure artists would do for the premiere shifter drug dealer on the West Coast. Sonya caught herself looking at her surroundings almost forlornly as she passed through the huge living room, lamenting all that she was leaving behind.

Fuck that. He’s a prick and karma’s going to kick his ass one day,
she reminded herself.

Plenty of time to cry after her shitty choices later. Right now, she needed to focus on getting the hell out of Dodge – or California, anyway.

Her hands gripped the handle that would let the screen door slide open, but before she could tug on it, the door was ripped to the side and the moonlight blacked out by a huge figure.

“Shit,” she mumbled into the bag that was still between her lips and stumbled backwards with her mind going into overdrive.

“That’s no way to greet your mate, baby,” Blade said, wearing a sneer that made Sonya think of anything but warm and cuddly mating.

The lights were flicked on behind her and a cold shiver ran down her spine.

“I
told
you she was here,” Deke called triumphantly.

Sonya didn’t need to look over her shoulder to imagine the winning grin Deke must have been wearing. Even less did she have to imagine the dopey, confused look that Tate certainly had plastered on his face. He was like a big, dumb puppy, made to do things by people much smarter than he was.

“Where do you think you’re going with that, Sonya?” Blade rumbled, his voice reverbing back on the walls.

Just the sight of him could fill most people with dread, and lately, Sonya was no different. She knew every muscle, every inch of his body, and she thought she was intimately acquainted to every face he made, but this one was new. The way he was looking at her wasn’t just dangerous, it was fucking horrifying. His hard, wide jaw was squared and tense, and his slightly Roman nose looked even more severe now that his nostrils were flared.

Blade’s gray eyes glared through her, and she thought she would ice up all over. Her shoulders hunched a bit and her muscled were brimming with readiness. Fight or flight? Looking at the gigantic Caspian tiger shifter in front of her, flight seemed like the more reasonable choice.

She didn’t say a word because she didn’t want to drop her loot. Instead, she did a series of quick sidesteps – just enough to make Blade take a lumbering step to the left – and then dodged right past him. She leapt off the high balcony as if lightning were at her heels and let the shift take her.

Sonya kept her teeth clamped shut around the bag as the power of the panther undulated through her. Her legs elongated into graceful but powerful paws and her body was quickly covered by short, black fur with just the slightest hints of spots underneath. Her piercing hazel eyes turned to the gold and black of the big cat, and when her paws finally touched the soft grass beneath, the human was safely tucked away inside of the beast.

“Get her!” Blade roared behind her.

She didn’t need to be warned twice. With practiced ease, her body fell into the motion of running, her long tail swishing behind her. She covered the grassy knolls of the wide backyard easily, disappearing among the darkness of the night and the bushes that had been planted for the precise reason of giving Blade a chance to be in his tiger form at home. Now, it was going to provide her a chance to get away.

Faintly, her small round ears caught the sound of the heavy thud of Blade landing on the ground, and she had no doubt that he would be right behind her. But she was faster, leaner and trained by years of stealing and scheming to keep her alive, and he’d been sitting on his plush, thickly hided ass and raking in the billions.

She moved soundlessly, and when she saw the ten-foot high fence come into view, she only needed to take a few faster steps to gain enough momentum to bound up and grab hold of the ledge. Sonya pulled herself up and disappeared on the other side, her long tail swishing gracefully behind her.