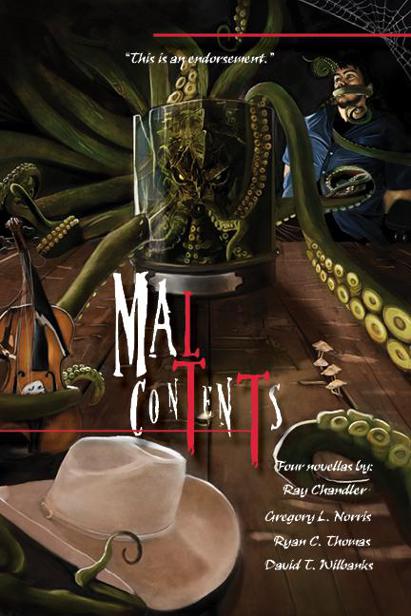 Copyright 2011 by Grand Mal Press. All rights reserved. Printed in the United States of America. No part of this book may be used or reproduced in any manner whatsoever without written consent except in the case of brief quotations embodied in critical articles or reviews. For information, address www.grandmalpress.com

The
madam was taking forever to die. She strolled about the parlor with the ice pick stuck in the back of her head, touching her fingertips to the upholstery of the shabby furniture like a blind person reading secret messages in Braille.

“I put it in her brainpan,” Melvin Locust whined. “She ought not to be walking around.”

“Yet yonder the bitch goes.” Jesse lit a smoke and flopped in an overstuffed armchair to watch the big woman shuffle over to the wine-red window curtains and rub her face against the plush fabric.

Jesse squinted behind the smoke rising from the cigarette clamped between his teeth. He absently spun the cylinder of his pistol round and round as if he were winding up a mechanical toy.

“She ain’t got no idea where she’s at,” observed Melvin. “Like her brain short-circuited.”

“Don’t need one. You’re the brains of the outfit. Ain’t that what you’re always saying? I’m just the muscle.”

“Then muscle your ass upstairs and check on Queenie, make sure them whores didn’t get the jump on her.”

“Aw, Queenie’s all right. She’s meaner than you and me put together. She gives them whores that evil eye they’ll shit their bloomers and jump through hoops.”

“Just get your ass up there. I’ll be watching this here creeping-Jesus floor show.”

Melvin stepped over the gut-shot goon that had tried to stop them from taking the madam’s cashbox, and headed upstairs to check on Queenie and the whores. She’d herded all six of them into a bedroom on the second floor, and God only knew what she was doing with them to amuse herself. She didn’t look particularly scary, even with that sexy scar running along her jaw, but she scared the Yankee stew out of Melvin. He didn’t like being around her when Jesse wasn’t there to keep his unbroken filly reined in.

Melvin vividly remembered the time he woke out of a lazy afternoon doze to find the blade of Queenie’s straight razor laid across the shaft of his dream-stiff dick. “Were you dreaming about me?” she’d demanded.

Logy with summer heat, he couldn’t decide if he was supposed to answer yes or no.

“Were ya, prick?” she persisted, shaving a couple of straggly hairs off the underside of his root to make sure she had his full attention.

“Goddammit, Queenie, what you want me to say?” he whined.

“You best be saying the truth, by God. I’ll know if you ain’t.” She was smiling then, but Melvin knew it would be a mistake to try to read the fate of his penis in that sly smile. She could still be wearing it when his dick hit the floor.

She flicked her wrist and raked the razor across the base of his penis. He yelled and looked down in horror, expecting to see a bloody stump, but his cock was still attached, though shriveled to the size of a Vienna sausage. Queenie laughed, flipping the blade to show him that she’d used the blunt edge to rake him. He wanted to hit her then but he didn’t because he knew she might kill him if he did, probably in his sleep. He’d seen her slice a man’s jugular with that razor, and he knew she was quick as lightning.

At the top of the stairs he pulled his Colt revolver from the waist of his denims and knocked on the bedroom door. The bitch was quick but a .45 slug was quicker. “Queenie? Coming in.”

He opened the door and stepped into the perfumed room. Queenie had the six whores lined up on the edge of the big bed, and she was pacing before them on her long legs, delivering her sermon. Her pistol was stuck in the waist of her riding britches at the small of her back.

“A whore’s about the lowest thing a woman can be,” she told the captive congregation. “You let men use you and defile your bodies for paltry pennies until you’re too old to cut the mustard and then they run you off with your looks shot to hell and your pussies stretched out and used up and fit for no husband, even if one was to want you for his wife. I know how it is, girls. I was born in a whorehouse. My mama was the prettiest woman in Paducah, Kentucky, but when she died she was a crazy brokedown hag at thirty-two, with the syph eating up her brain. That’s what you girls can look forward to if you don’t leave your whoring ways behind.”

A bottle-blond girl with big breasts and pouty lips said, “They didn’t have to kill Mama Rose.”

Melvin chuckled and said, “Hell, she ain’t kilt. She’s still walking round with that ice pick in her head.”

“She’s as good as dead and you know it,” the blonde went on, feeling a little braver about speaking her mind. “She weren’t a bad woman and didn’t deserve that kind of treatment.”

“That’s right, Jigg Tits,” Melvin said to the mouthy big-breasted girl. In truth, her bosom was the color of clabbered milk but he liked the musical sound of the nickname he’d just made up for her. And her nipples
were
the darkest he’d ever seen on a white woman.

“Shut up, Melvin,” Queenie said, glaring. Then she once more addressed the whores. “When the law ask who done this, you tell ’em it was the Queenie Cotton Gang that gave you your freedom.”

Melvin disgustedly shook his head but said nothing to dispute her. He would leave it to Jesse to set her ass straight about whose gang they were. And Jesse would too, if the newspapers printed that it was the Queenie Cotton Gang that knocked over this Arkansas whorehouse. Queenie fancied herself the new Bonnie Parker. She’d even taken to smoking cigars after seeing that famous newspaper photograph of Bonnie with a stogie in her mouth. Queenie figured she and Jesse could fill the vacancy left by Bonnie and Clyde when that retired Texas Ranger and his pals gunned down the notorious couple last month on a backwoods road in Louisiana.

“Guess Jesse got tired of waiting for the old madam to die,” Melvin offered.

Then another sound echoed through the two-story house. It sent frigid shivers up Melvin’s spine. “What the hell is that?” he asked the whores. “You got a pet wolf?”

Melvin wondered if the whore was having him on. The howling went on and on. It was the best imitation of a wolf he’d ever heard. “That’s a
girl?”

Another whore said it sure enough was. “She’s chained to her bed,” she explained, “so she won’t run off.”

Melvin grinned. Queenie thoughtfully sucked on her stogie. They heard Jesse stomping up the stairs.

“You got customers like to fuck
that?
” Melvin was amazed. “I knew some of them old farmboys liked to poke cows or sheep now and then, but this beats all I ever heard.”

“They like her ‘cause she’s so young and hairy,” volunteered a skinny waif with bobbed hair. “And tight as Aunt Flora’s corset.”

Jesse appeared in the doorway, pistol in his hand.

“What the hell’re you talking about?” Jesse asked him, cockeyed.

“I read one time in
Police Gazette
about some killer Frenchman thought he was a werewolf. It said you might could kill a real one with silver bullets.”

“You mean to tell me that’s a whore I hear howling?”

“Yesiree. Spooky ain’t it? Let’s go have us a look. She’s chained to the bed, so she can’t bite us.”

“You ain’t gonna shoot her, are you?” Jigg Tits asked. “She never hurt nobody. Never caused no trouble since Mama Rose bought her off that filthy carny.”

Jesse said, “Say, is this a whorehouse or a damn freak show?”

“We won’t shoot her, honey,” Queenie said. “We won’t shoot nobody else if y’all just stay right where you are while we go see about this howling whore. We got us a deal, ladies?”

The whores all nodded. The gang of three went out of the room and followed the howls to a room at the end of the hall.

My daddy had a wolfhound sounded just like that,” Jesse said as he reached for the solid-glass doorknob, “after it got rabies. The Old Man didn’t know it was rabies till after he got bit and come down with it hisself. So I was the one had to shoot him.”

“You shot your daddy?” asked Melvin.

“No, you idjit, I shot the hound.” Jesse kicked the door. “Sumbitch’s locked.”

“What happened to your pa?”

“What you think happened? He went mad with the hydrophoby and we had to chain him to a tree. Go ask them whores where the key to this door is at.”

“So what happened to him?”

“I reckon you could say the Lord took mercy on him,” Jesse said this with the same deadpan expression he usually wore when he was telling one of his tall tales. “Lightning struck the tree and killed him outright.”

“Don’t call me that, goddammit.” He was in no mood to put up with her guff tonight. He’d been against robbing the whorehouse in the first place. Banks, trains and armored cars were where the real money was to be had. Whorehouse loot was chickenfeed, but Queenie had made it her personal crusade to knock over every brothel they came across on their cross-country crime spree, and Jesse hadn’t been man enough to say no to her. “Cunt,” Melvin muttered, but she didn’t hear it over Wolf Girl’s mournful howling. He went back to the whores and asked after the key.

Jigg Tits said, “Mama Rose keeps the keys in the bosom of her dress.”

The thought of digging in the fat madam’s bosom didn’t appeal to Melvin at all. He’d never cared for the fleshy feel of fat titties. And fat
dead
titties wouldn’t be any better. He preferred small, firm breasts of the kind Queenie had. Her ass was a mite too scrawny for his tastes, but he did admire her tits. Not that he had any hopes of ever actually touching them without pulling back bloody nubs where his fingers used to be.

“I ain’t sticking my hand down that sow’s dress,” he said with a shudder. “Come with me, Jiggy Tits. You’ll do the digging.”

“Stop calling me that,” she said. “My name’s Zelda. If you expect me to do anything for you, you’ll call me by my real name.”