Read Mallara and Burn: On the Road Online

Mallara and Burn: On the Road 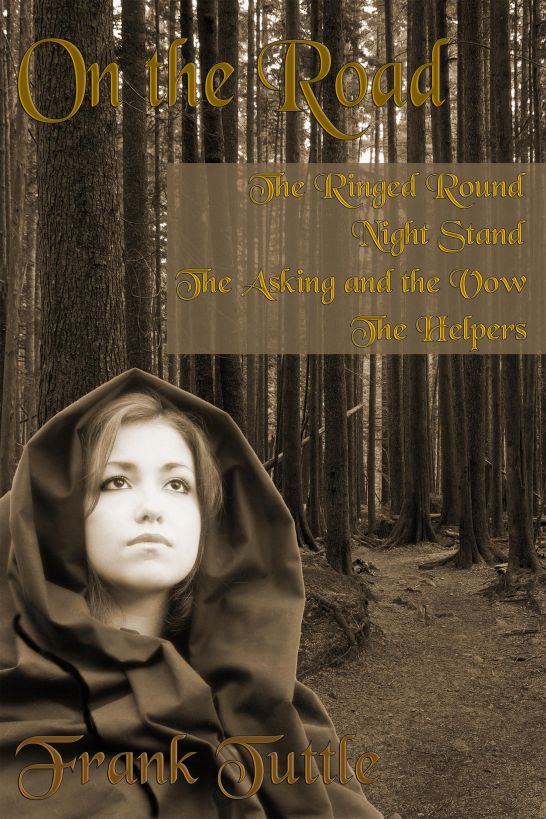 MALLARA AND BURN: ON THE ROAD 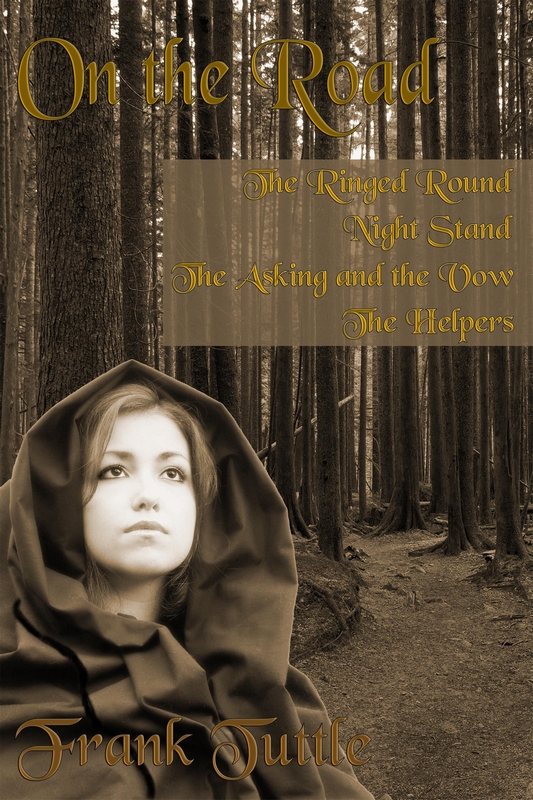 The Asking and the Vow

The very first professional fiction sale I
ever made, Night Stand, is included in this collection.

Night Stand sold to Marion Zimmer Bradley's
Fantasy Magazine. MZB herself was the publisher and the editor and
the slush-pile reader and the author of some of the most direct and
scathing rejection letters ever to grace the public mails. Really,
her rejections were that good; writers compared them on writing
discussion boards, almost boasting at the severity of them.

I got quite a few of them from MZB before she
passed away.

All of them were deserved. She helped me
recognize -- and avoid -- a few of the flaws in my own writing
style. For that I will always be grateful.

I got lucky in another respect, too. My very
first published short story was illustrated by none other than
Vincent Di Fate. The illustrations he did for Night Stand were
beautiful, were works of art all on their own. The title image,
matted and framed, still hangs in my study.

Mallara and Burn went on to enjoy several
more short stories in various other publications. I think my
personal favorite is The Ringed Round, which is a Halloween story
with a Christmas twist.

I'm always eager to hear what readers have to
say. And one of the best things about e-books is how easy they make
it for authors and readers to communicate. So if you have any
comments, be they praise or scold, feel free to email me at
[email protected]
.
too, please visit my website at
www.franktuttle.com
!

I hope you enjoy traveling along with Mallara
and Burn as they see to the magical well-being of the Five Valleys.
Oh, one last thing -- a huge THANKS to Beth Morgan, who once again
created a brilliant cover! Thanks Beth!

"Looks like the storm is over," said Burn,
who hovered in the shelter of a grinning Ollow's Eve pumpkin. When
he spoke, his voice set the candle within the pumpkin to
flickering, and Mallara's frown deepened at the thought of Burn as
the spirit of Ollow's Eve.

As if there will be anything to see here
tonight, she thought. Dancing bones on Ollow's Eve. Bah. There's
nothing here but a prehistoric ring of badly-carved stones and a
weary Sorceress with a blister on her heel.

About her, rain-water still dripped and
splashed from the circle of twelve tall stones the Tothish
villagers called the Ringed Round. Probably half of the traditional
Ollow's Eve twelve dozen carved pumpkins scattered about the Round
were still lit, their candles having braved the storm; Mallara was
thus surrounded by glowing orange eyes and wide, toothy grins, each
pumpkin face lit by red-orange flickers and each casting small
quick flocks of shadows.

Mallara looked away from the leaning old
stones and the leering pumpkin-faces, threw back her wet hood, and
sought out instead the moon or the stars. The sky above was inky
black, though -- the rain might be gone, but the clouds hung low
and thick.

"We won't be checking the alignment of Stone
Seven against the north star tonight," she said.

"Pity," said Burn, still in his mad-eyed
pumpkin."Still, perhaps we can make it back to Toth before the
Ollow's Eve party breaks up," he said."You think?"

Mallara shrugged. Now that the wind had died,
she could hear faint tootles and pipes of music from the village
below; music, and snatches of laughter and singing.

"That isn't the dance I came to see," she
said. She whispered a word, and caught her staff as it fell from a
hole in the air."And this night is far from done."

Burn flew out of his pumpkin's
grin."Mistress," he said, darting to hang over Mallara's right
shoulder."How many times did you say Master Wesseven held vigil in
this very spot?"

Mallara walked to the center of the Round and
planted her staff upright in the thick red mud.

"Eight times," said Burn."Eight Ollow's Eves
he spent on this very spot. Eight nights of watching and waiting.
And what did he see?"

Mallara said a Word, and a handful of light
sprang to life at the top of her staff, rose, and halted when
Mallara snapped her fingers.

The light lit the Round. Not noonday-bright,
but bright enough that Mallara could see her own shadow, and Burn's
faint blur in the air.

"Master Wesseven saw nothing," said Burn, in
reply to his own question."He tried every spell, every trick, every
conjuration he knew, and aside from the time the goat wandered up
behind him and ate his hat the great and terrible Master Wesseven
saw not a single dancing leg-bone."

Mallara spoke a Word. A writhing tangle of
lights, like firefly glows stretched into strings and hung in a
whipping wind, flared in her hands. She tossed the glows into the
damp air, and they spread out, darting to and fro among the
stones.

"I'm talking to myself again, aren't I?"
asked Burn.

Mallara spoke another Word, and caught her
glass wand as it appeared before her.

"Fine," said Burn."Mope all you want. Mope
through a jolly all-night back-country Ollow's Eve party. Mope when
your faithful assistant tries to cheer you up. Mope all night, for
all I care. Just don't mope when Old Bones doesn't show up, because
we both know you aren't really here to investigate legends of
dancing bones and ghostly pipers. You're here to stand in the mud
on a rainy Ollow's Eve and mope."

Burn buzzed away from Mallara's shoulder."The
Sorceress speaks," he said."What an honor. Pity, though. I've got
work to do. No time for idle pleasantries. Might be any number of
dire magical threats lurking among these freshly-carved yet
sinister vegetables."

Mallara sighed. Her wand grew warm in her
hand, and she idly soothed it with a whispered Word and a gentle
squeeze.

A damp wind rose up, stirred the
pumpkin-candles, and quickly died. Mallara's tangle-spells returned
as the wind failed, and the spells whispered briefly of wet stones
and shadows and Burn's angry buzz.

But nothing else. No hint of ancient magic,
no taint of hidden haunts. Just rain and stones and grinning
candle-lit pumpkins.

And a lone moping Sorceress, thought Mallara.
He's right, she realized. I am moping.

It's all this Ollow's Eve business, she
decided. Pumpkins and parties and gifts in the night. Oh, I know
that there is no Winter King, no thinning of the veil between this
world and another, no moonlit tide of magic sweeping through the
night. I'm all grown up now, and I know all this, and all too
well.

Mallara sighed and shifted her feet and
nearly lost a boot to the mud. As she struggled to free it, the
music on the wind waxed louder, and Mallara recognized the tune
as"Hail, Hail the Winter King."

The words sprang unbidden to Mallara's mind,
and she shook her head and wrenched her boot from the mud. As a
child, I sang myself to sleep with that very song, many an Ollow's
Eve. How ironic, she thought -- my childish love for the kindly
Winter King led me to the study of magic, and he was the first to
fall to my newfound knowledge.

Pumpkins are just pumpkins, and better used
for pies.

"Burn," she said, after sending the
tangle-spells back among the Round."I'm sorry."

Burn made no reply. Mallara sighed, spoke to
her wand, and filled the stone circle with a soft golden glow.

"Anything?" asked Burn, from above.

Burn fell to hang before Mallara."Same here.
Stones and mud and pumpkins." He paused, and his blurred volume of
air shrank suddenly."Dare I suggest a retreat to yonder inn?"

Mallara lowered her wand."That is a perfectly
reasonable suggestion," she said."But I've made a decision. Unlike
Master Wesseven and Mage Illswit and who knows how many Mages
before, I am not going to spend my tour as Mage to the Five Valleys
tramping to Toth every few years."

Mallara nodded."Tonight, we shall stay. We
shall watch. If we see no dancing bones, hear no ghostly pipers,
then we shall leave, and not come here again, Burn. Ever.
Regardless of how many bakers and shepherds and Mayors swear
they've watched whole platoons of limber skeletons dance each night
the month of Ollow. Agreed?"

Burn bobbed back a bit."Agreed, Mistress," he
said. His voice softened."This night, then."

"This night." Mallara slipped the wand in her
pants pocket, hung her damp cloak up by the hood on her standing
staff, and began to pace.

"Right," said Mallara, struggling through the
mud."What, precisely, do the stories say about the Round?"

Burn flew above her, matching her pace."On
Ollow's Eve, when the piper plays, Old Bones comes out to dance,"
he said."Old Bones is understood to be a euphemism for the Winter
King, a local harvest spirit..."

"I know all about the Winter King," said
Mallara. He brings gifts to good children, brings peace to the
troubled. An image of a bone-bodied, pumpkin-headed sprite rose to
her mind, and she quickly pushed it away."What we need to know,"
she said, "is what makes this Piper play, and when."

"According to everyone who has studied this
place, Mistress, the piper plays only when Mages aren't around,"
said Burn."The only recent sightings have been by shepherds, by
kids, and at least one wandering minstrel." Burn settled nearer."I
never understood why Master Wesseven was adamant that the Round be
studied; he didn't believe half the stories."

"He believed a few," said Mallara. She halted
and kicked the foot of Stone Five, knocking gobs of red mud off her
boots."And he always said that if even one story was true, then the
Round was worth the time," she added.

Burn snorted."No disrespect, Sorceress, but
the man believed stones sometimes fall from the sky," he said.

Burn flew a small loop above her head."Fine,"
he said."Taunt me. But the fact remains -- no Mage ever saw the Old
Bones dance, or heard the piper play."

Meralda resumed her slow, noisy circuit of
the stones, and nodded in agreement.

"Knowing Mages -- aside from you, Mistress --
they stamped in here grumbling, snuffed out a cigar with their boot
in the exact center of the ancient sacred space, and unleashed two
dozen hostile spellworks at the pumpkins," Burn said."Bless their
enlightened souls," he added, quickly.