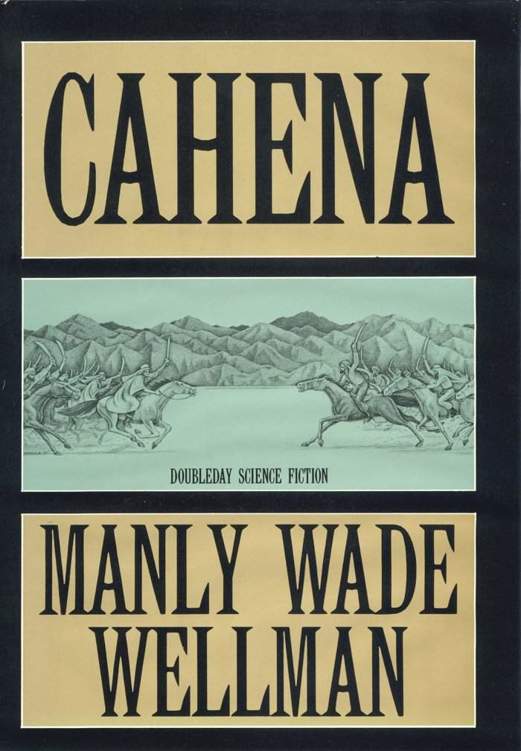 A Dream of the Past
Manly Wade Wellman
1986

All the characters in this book
are fictitious, and any resemblance to actual persons, living or dead, is
purely coincidental.

Note
to the electronic edition, 2002

A historical novel must be as historical as
possible, but the almost forgotten history of the brave and beautiful Cahena,
who for years blocked the Moslem conquest of
North Africa
,
remains
deeply
shadowed. Today, her name has various
spellings. Even the supposed dates of her rise and fall vary from work to work.
Place names have changed over the centuries.

Perhaps H. Rider Haggard wrote
She
and Pierre Benoit wrote
L’Atlantide
because they had heard something
about the Cahena.

And now they wait and whiten
peaceably,
Those conquerors, those poets, those so fair:
They know time comes, not only you and I,
But the whole world shall whiten, here or there;
When those long caravans that cross the plain
With dauntless feet and sound of silver bells
Put forth no more for glory or for gain,
Take no more solace from the palm-girt wells,
When the great markets by the sea shut fast
All that calm Sunday that goes on and on:
When even lovers find their peace at last,
And earth is but a star, that once had shone.
— James Elroy Flecker

When the two armed retainers marched the big
stranger into the tent, Charles Martel sat and looked heavily at him. At last
Charles Martel said, “Leave him here with me,” and to the stranger when they
were alone, “Sit on that other bench. If you can tell me how to fight those
Moors I must soon face, I’ll be glad to listen.”

The tent was by far the biggest and finest in all
the great sprawl of the Frankish camp. Woven of twisted sheep shearings, it
could shed rain and fence out the October night wind. Black-oiled poles pushed
the top high. By the light of heaped red embers just inside the doorway, the
interior looked like a murky cave. Baggage and camp gear were cluttered along
its walls. Between Charles Martel and the stranger stood a rough plank table on
two trestles, with a big wooden trencher of cold roast venison, a torn loaf of
bread, earthen wine flasks, and half a dozen cups of copper-bound leather. Furs
and blankets were stacked to one side for a bed. On a rack hung mail jackets, a
homed helmet, a lance, and a scabbarded sword. Among the shadows in the back of
the tent stamped a big blond horse, tethered to a peg, with grain spread on a
cloth under his nose.

Charles Martel was big and blond, too. His
gold-worked tunic was thrown open to show his leather war shirt, sewn all over with
lengths of iron chain. The ale-colored crescent of his mustache hid his mouth
and clamped his hard, square chin, and from under his jeweled cap heavy braids
of hair hung upon his shoulders. A fox-skin cloak draped him. On his legs were
heavy boots, lashed at the knees. He studied his visitor again, silently and
searchingly. With one yellow-fuzzed hand he fondled the haft of the great
hammerheaded mace that lay across his lap, the weapon for which men had named
him Charles Martel.

He saw a man fully as big as himself and perhaps
twenty years older, in his mid-sixties anyway, with shabby garments and a
massive cropped head. Thick, bowed legs showed cross-gartered beneath the
stained tunic of brown cloth. The wide leather belt had clasps at the left from
which a sword had been unslung, at the right an iron-riveted sheath from which
a dagger had been plucked before the guards had fetched the stranger to speak
alone with the chief of the Franks. Broad, sunburned hands bracketed themselves
upon the square knees, and one big wrist was wound with a blood-spotted rag.
The face was a weathered rectangle, set with three-cornered blue eyes and a
nose that sometime or other had been smashed flat by a heavy blow. A scar
squirmed down into the blunt, gray-laced tawny beard, like a dull river running
among frosted autumn woods.

A stark old fighter, Charles Martel judged
expertly, seasoned rather than burdened with his years. To fight such a man
would be a fierce, violent joy, like a gulp of strong wine.

“They didn’t say your name,” Charles Martel
addressed him.

“They did say you were English.”

A nice distinction, pondered Charles Martel. Maybe
they understood it in
England
.

“And they say you came into camp after fighting
the Moors and Arabs before us,” Charles Martel prompted the old warrior who
named himself Wulf.

“I’ve fought them for forty years,” said Wulf.
“In
Asia
and now here in your country.”

Charles Martel scraped his mustache with his knuckle.
“They also said that you had a band of stout men who stood in the way of this
Moorish general — his name’s strange, hard to speak.”

“Abd-ar-Rahman,” supplied Wulf the Saxon. “I had
only twenty men, not enough to stand in his way. We stung his advance guard,
but they killed half of us. We fell back and fell back until we found your army
camped here, in Abd-ar-Rahman’s face.”

“Half of you got away. Did you have women with
you?”

“My followers had one or two,” said Wulf. “Lost
them, I’m afraid. There was no woman with me.
None.”
He snapped his hard mouth shut on the word.

“We’ve skirmished with the Moors for a week now,”
said Charles Martel, “waiting for them to give battle.”

“Abd-ar-Rahman waits for you to give battle,” said
Wulf. “He’s driven everything before him until now — driven them since he was a
young man coming out of
Africa
. He won’t go back unless you beat him.”

“You talk as if you know him.”

“I know him,” said Wulf. “I’ve fought him more
times than you and I have fingers and toes.”

None of that was supple courtier talk. Wulf spoke
respectfully but bluntly, in a deep voice. Charles Martel remembered Count
Eudo, driven from his castle on the
Garonne
into the protection of the Frankish host. Eudo had been
plaintive, even servile. Charles permitted himself to like the flavor of Wulf’s
speech, even while he was glad that no retainers heard their master so levelly
addressed. Silence again, while the big war-horse stamped behind him and
snuffed at its grain.

“No woman with you,” Charles Martel harked back.
“Don’t you love women?”

“At my age, a man’s nature gets past loving
women.”

“Ha!” Charles Martel barked a laugh. He leaned to
pour wine into two leather cups and shoved one across the table to Wulf. “I’ll
warrant this
wasn’t always so with you, not loving
women.”

“I didn’t speak of times long past,” said Wulf,
closing his corded fist around the cup. “I spoke of now, with Abd-ar-Rahman
here in your country, his camp full of booty plundered from your people, his
men swearing by Allah to wipe you off the earth.”

That, too, was boldly blunt, but it was a
wholesome reminder of why they sat together. Charles Martel drank and wiped his
mouth.

“
England
’s been Christian for more than a hundred years,” Wulf
said, drinking in turn, and that was no real answer to the question. “My father
wanted me to be a priest and put me to school at
Canterbury
. Abbot Hadrian was my teacher.”

“Hadrian?” echoed Charles Martel, remembering that
a Roman emperor had borne that name.

“Hadrian of
Carthage
.
He taught me to read and write Latin and Greek and Hebrew, and I was good at
those.”

“I’d have thought your young mind would have been
to war and weapons,” said Charles Martel.

“It was, and Abbot Hadrian saw that it was. When I
was seventeen, he sent me away from
Canterbury
, saying I’d be happier as a soldier.”

“He must have been a wise teacher, and a kind
one.”

“He was as sharp as vinegar, but he understood
me,” said Wulf. “He told me cloisters and psalms were for some boys, but not
for me. So I fought in an English war or two, and others among your Franks. I
was at the battle of Tertry, forty-five years ago.”

“Were you so?” Charles Martel wondered if Wulf had
fought for or against his father Pepin, but did not ask. “Well, what then?”

“There was peace in these countries for a while. I
traveled on and got into the imperial service at
Constantinople
.”

“With the Byzantines.
What sort of people were they?”

“Fairly proud.
Fairly foolish.
But the army was
a good one. I was with it against the Arabs in
Armenia
and
Syria
.”

“It was deadly fighting,” said Wulf. “There was
supposed to be a truce, but there was fighting. Then I visited
Carthage
, for Abbot Hadrian had come from there. I got there in
time to be driven out by the Arabs in 695, but
Constantinople
sent a fleet, and we drove them out in turn. It was what you’d call good
fighting.”

“The Arabs destroyed
Carthage
next time.”

“I was there when they started taking its stones apart,”
growled Wulf into his wine cup. “Some got away by sea as the Arabs closed in. I
couldn’t join those, but I managed not to get killed. I ran into the desert
before the army of Hassan ibn an-Numan.”

“Christ’s soul, my friend, you seem to have done a
lot of running before those infidels,” Charles Martel could not help saying.
“Back in
Carthage
and later, and now, too, they’ve chased you.”

Wulf grinned, showing gaps in his teeth. “I didn’t
run long that time after
Carthage
fell. I came among the Moors.”

“And the Moors are yonder,” reminded Charles
Martel, gazing into the night outside.
“Deciding how to fight
us.”

“They weren’t Moslems then,” said Wulf. “We fought
the Moslems, and I saw the Moslems do some running of their own.”

“When did that happen?”

“Thirty-four years back, when I was thirty. I’d
seen so much fighting by then that I thought I had no more to learn.”

“There’s always something more for a fighter to
learn,” pronounced Charles Martel. “Who was your Moorish general?”

“The Cahena was a woman,” said Wulf.

“She whipped Hassan and his bravest soldiers,”
said Wulf. “Drove them like sheep. Those who didn’t run almost all the way back
to
Egypt
, we killed or captured.”

“God’s rood, this is a strange story,” vowed
Charles Martel, filling their cups again. “I never heard of this war queen.”

“There’s always something more for a fighter to
learn.” Wulf gave him back his own words without mockery. “She was the only one
who beat the Arabs, after they came from
Carthage
.”

Charles Martel shoved the replenished cup toward
Wulf. “Tell me how she did it,” he said.

“That will be a long story.”

“You’ll have a long night to tell it,” said
Charles Martel. “Take your time to say what will help me fight them tomorrow.
You say
Carthage
fell, and you escaped. How did you meet this Cahena?”