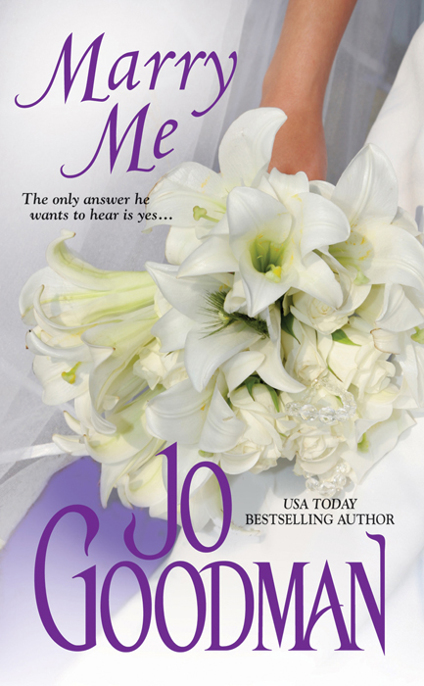 Rhyne closed the book and set it on the table beside her. She nestled her cold fingertips in the folds of her flannel nightgown.

“Come over here and stand.”

She merely watched him, waiting.

“Could you be more stubborn?”

This time one corner of Rhyne’s mouth curled upward.

Cole closed the distance between them so quickly that Rhyne had no time to catch her breath. It was just as well. He would have taken it away. Grasping her upper arms, he lifted her out of the chair. She couldn’t quite get her legs under her and she fell into him. He found her mouth while she was still trying to find her breath. His lips ground against hers. The heat that he’d abandoned at the stove was replaced by one that was entirely more satisfying …

All Kensington titles, imprints and distributed lines are available at special quantity discounts for bulk purchases for sales promotion, premiums, fund-raising, educational or institutional use.

For Robin Harders–
a good person to have in your corner

After careful examination of the particulars of your letter of interest and curriculum vitae the Reidsville Physician Search Committee is prepared to offer you a contract to serve as the Town Doctor. The contract is enclosed for you to review before accepting our offer. Our Lawyer for the Town assures us that it is a straightforward agreement, and we respect his opinion, as he knows the Town’s Business.

As you may have many similar offers for your doctoring, the Search Committee has asked me to convey their confidence in your abilities as stated in your letter. The Committee wishes you to know that you were selected from twenty-two candidates with like backgrounds and qualifications. Your letter, though, set you apart, and has eased our minds that you are personable and of excellent character. I will tell you that some members of the Committee found your missive charming.

With the unexpected departure of our dear Doc Diggins after twenty-four years of service to our Citizens, finding a replacement has been our priority, especially after Sam and Esther’s baby had the rosy rash that none of us had ever seen. (All is well there now, you will want to know.)

Although you did not inquire about our Town, the Committee compels me to mention that Reidsville has some eight hundred forty-six souls, and they are all good folk. We are a Town of self-sufficiency and enterprise. The Calico Spur, an independent Railroad serves the Town. Reidsville has all the amenities and entertainments enjoyed by larger cities like Leadville and Denver. It’s been more than a year since anyone was shot.

We eagerly await the favor of your reply and remain hopeful that your interest and circumstances have not changed.

Coleridge Monroe reread the letter before he separated it from the contract. Upon reviewing the terms, and finding them as straightforward as Mrs. Easter indicated, he set the papers on his desk and leaned back in his chair. Beneath the desk, he stretched his legs and absently massaged the corded muscles at the back of his neck.

He sighed. It offered some relief to the pressure building in his chest, but it was inadequate by itself. He needed to confront the problem.

“Whitley.” He knew his sister was dawdling in the hallway outside his office, most likely with an ear pressed to the door in expectation of his reaction. Her eagerness these last few weeks to intercept the post began to make sense. She had been waiting for this letter and wanted to see it before he did.

He raised his voice just the level necessary to carry it beyond the heavy oak door. “Whitley. Come here.”

To her credit, she did not push the door open immediately. She was cleverer than that. Her deliberate delay forced him to raise his voice yet again and pretend he didn’t know precisely what she was doing. It was another moment before the door opened and a moment longer before she poked her head in.

In response, he crooked his index finger at her. She was looking particularly pretty this afternoon, slightly disheveled as always, but inordinately bright-eyed and puckish. Her complexion was a bit rosier than was its usual hue, a symptom, he knew, that could have many roots, but in this case was prompted by duplicity and some small sense of guilt. No longer in showy evidence was the spray of freckles across her pert nose and apple-shaped cheeks. He did not mention this to her for fear she would immediately seek out a mirror to confirm his observation. Worse, she might decide that the consequences of deception and remorse were worth the effort. The freckles were despised.

When she was standing in front of his desk, he pointed to the correspondence spread out across its scarred surface. “I am in receipt of an interesting offer, Whitley. I wonder what you might know about it.”

The question concerned Cole. He arched an eyebrow and fixed Whitley with a look that made her shift her slight weight from one foot to the other. “Am I to suppose that you sent out more than one letter on my behalf?”

“You are not to suppose any such thing,” she said stoutly. Shifting in place aside, she would not be cowed. “But you can imagine that I am not admitting to anything out of turn. Besides, any letter I might write would be on
our
behalf.”

Cole’s cheeks puffed briefly as he loosed another sigh. He hesitated, then pushed the documents toward his sister. “You forget with remarkable regularity that I’m the one charged with
your
care. I am the older brother.”

Her perfectly bow-shaped upper lip curled with disdain. In every other way she ignored him while she read the letter penned by Mrs. Easter. “Oh, this is excellent, Cole. Really. And no one has been shot in over a year. That certainly speaks well of the town, don’t you think? They are all good folk just as she writes. Did you read the contract? Is it satisfactory?”

“I read it. Whether it is satisfactory is unimportant. I’ve no intention of accepting.”

“What? Why ever not? Did you read the part about the amenities?” Before he could reply, she braced her arms on the edge of the desk, leaned forward, and gave him a look that betrayed her irritation even as it implored him to reconsider. “You hate the hospital. No, don’t deny it. I won’t believe you. I see it in a hundred small ways when you come home, no matter how you try to disguise it. You’ll never be allowed to do the research you want as long as you’re there. They always have some other use for your talents. Dr. Erwin is no friend to you, Cole. He is jealous of your skill, not admiring of it, and he will never give you the opportunities you desire to do research and advance your work.”

Stunned, Cole blinked. This was not a speech he could have ever anticipated his sixteen-year-old sister making. Her observations were accurate, and that troubled him. Was she listening at doors again, or had she managed to effectively make herself invisible so that his colleagues took no notice of her presence? Either was likely. With her flaming red hair always looking as though it needed the attention of a brush, the vaguely distracted expression in her green eyes, and her penchant for humming tunelessly as the mood was upon her, Whitley was often treated as though she was different in an odd sort of way, otherworldly, or slow-witted. At the Amelia Starcher Seminary for Fine Ladies, her fellow students thought they were very clever to give her the sobriquet Whitless.

“You’ve apparently given this a great deal of thought,” he said.

She nodded, paused, then asked with quiet earnestness, “Wouldn’t you rather be anywhere but here?”

He didn’t answer, and he didn’t bother to put the same question to her. He knew her well enough to understand when she was speaking from her own heart. Holding out his hand, Cole gestured for the letter in hers. She gave it to him and he reviewed it for a third time.

“Mrs. Easter writes that I am personable and of excellent character. Some members of the committee apparently found my letter of interest charming.” He glanced up at his sister. Whitley’s eyes immediately darted away. He wasn’t fooled when the keen curiosity that had been her expression was replaced by something that was unfocused and distant. He let it pass without reprimand. He asked his question with a tone that warned her he expected an answer. “How is that possible?”

Whitley made a small, helpless shrug. Her mouth curled to one side as she worried the inside of her lip.

“No one has ever mistaken me for charming,” he told her. “Me or my correspondence.”

“This is the first I’m hearing of it. Did you not call me obstreperous and overbearing at breakfast? I think you were doing more than trying out new words that begin with O.” Her blush gave her away. “Confess, Whitley. I can’t possibly consider this offer if you don’t tell me what you wrote.”