Read Mary Bennet: A Novella in the Personages of Pride & Prejudice Collection Online

Mary Bennet: A Novella in the Personages of Pride & Prejudice Collection 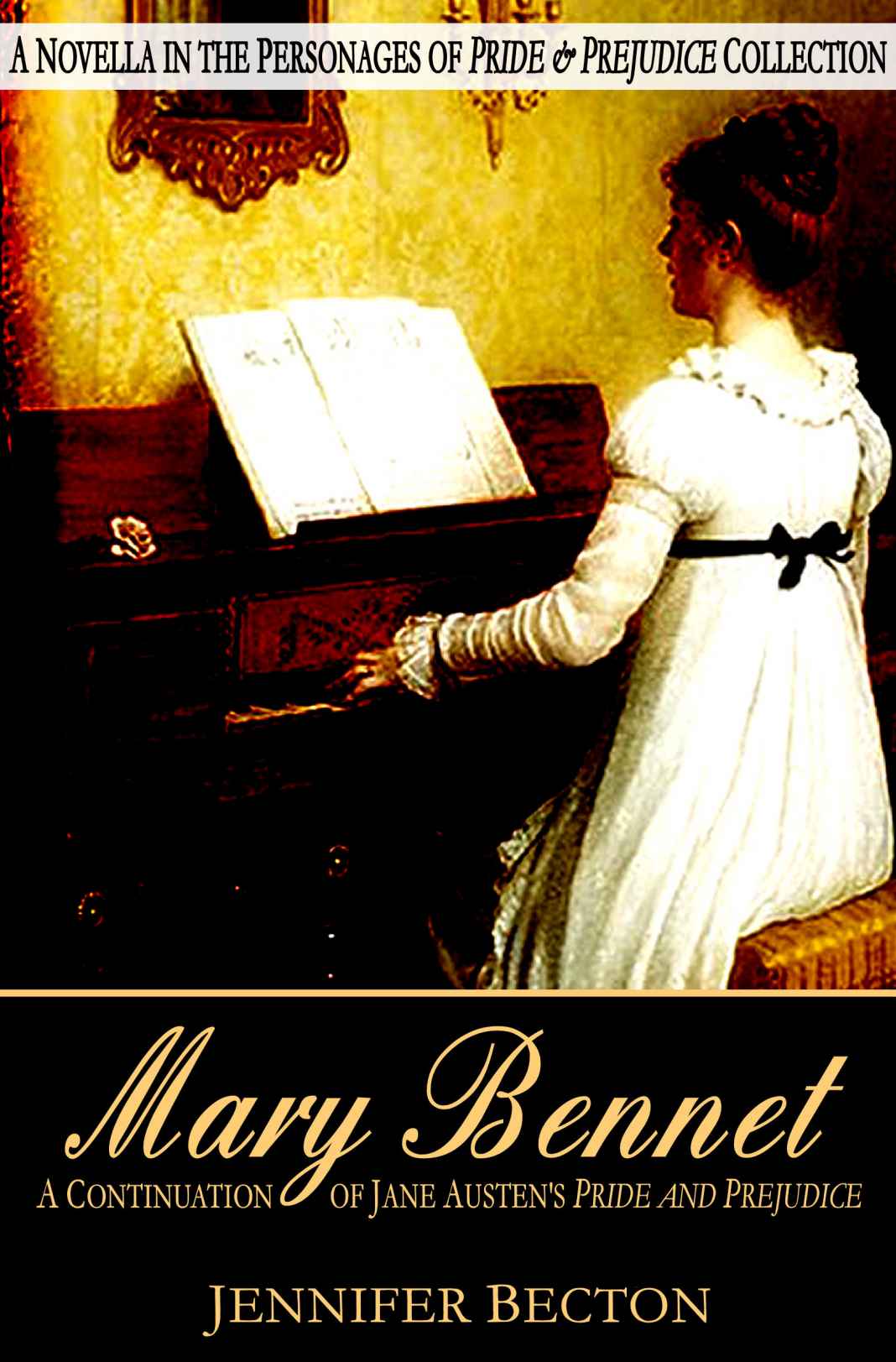 A Novella in the Personages of
Pride & Prejudice
Collection

The characters and events in this book are fictitious or used fictitiously. Any similarity to real people, living or dead, is coincidental and not intended by the author.

Other Works by Jennifer Becton

The Personages of
Pride & Prejudice
Collection

The Personages of
Pride & Prejudice
Collection

[Jane Austen] would, if asked, tell us many little particulars about the subsequent career of some of her people.

In this traditionary way, we learned that…

Mary [Bennet]…was content to be considered a star in the society of Meriton [sic].

“Come along, Mary!” Mrs. Bennet trilled in a tone that sent shivers up the backs of every resident of Longbourn.

Above stairs, Mary jolted upright in her chair and dropped the weighty tome she had been reading, causing it to crash to the floorboards with a resounding thud.

“Good heavens!” Mrs. Bennet cried with increased shrillness. “What was that? Do not tell me that you have tripped and torn your morning gown, clumsy child. And just when we have an important call to pay.”

“I dropped my book, nothing more, Mama,” Mary called as she heaved the text from the floor and carefully placed it on the little writing table beside her.

“What did you say? Well, one torn garment here or there is no matter to me. The Bennets are no longer paupers thanks to the fortuitous marriages of your elder sisters. We can afford a new gown for you. Perhaps I shall have one myself!”

Mrs. Bennet’s soliloquy paused, and then she added more loudly, “Oh! The hour is later than I anticipated. Pick yourself up, Mary. We must be off even now if we are to arrive at your Aunt Philips’s house to greet the new young lady.”

Mary obediently appeared at the head of the stairs, prepared for the usual commentary on her appearance and the inevitable comparison to one of her
beautiful
sisters.

Instead, her mother took her in from coiffure to boots.

“I see you did not damage your gown. Good for you, my dear. Now do come along.”

Pleasure rippled through Mary at her mother’s response, for it was as near to matronly approval as she ever received. Having four sisters, all of whom shone with beauty, talent, wit, and vivacity, plain Mary had all but disappeared amidst the fray.

Now, with three sisters married and her younger sister Kitty gone to stay at Pemberley, Mary was the only daughter who remained at home. Finally, she had the opportunity to shine.

Smiling at her mother, Mary trod down the stairs, donned her pelisse and bonnet, and hurried to the waiting carriage.

Meryton lay one mile distant from Longbourn, but even in such fine spring weather, Mrs. Bennet preferred to travel there by carriage. Mary, who despised walking, looked with gratitude upon her mother’s preference.

“Arriving at one’s destination in a carriage is far more dignified than doing so on foot,” Mary mused, her eyes focused on the passing countryside.

“Oh, for heaven’s sake, Mary,” Mrs. Bennet said, sighing heavily. “Do not moralize the morning away, and certainly not while we form a new acquaintance.”

Mary frowned. “Moralize? What do you mean, Mama?”

“Do not be difficult, child.” Mrs. Bennet rolled her eyes. “You know how off-putting your musings over principles and literature can become.”

Embarrassed and confused, Mary felt her cheeks reddened. She leaned forward in her seat, her brown eyes imploring even as her fingers tightened reflexively in the fabric of her skirt.

“You do not approve of my conversation?” she squeaked. “I have always made proper conversation a particular focus of study.”

“And you should have learned that displaying too much knowledge does you no credit.”

Mary knew the maxims well, and she recited them for her mother. “A young lady must be educated enough to speak skillfully on any subject, though she must also deliver the words with a certain humility and feminine reserve. I am nothing if not humble and reserved, Mama.”

“Do not be obtuse,” her mother said, frustrated. “No one wants to hear moral lessons over a nice meal, no matter how humble you sound. Morality is bad for the digestion.”

Mary’s eyes narrowed as she considered her mother’s reply. An attitude such as that was surely to blame for her youngest sister’s disastrous matrimonial choices. Unrestrained emotions and a lack of parental correction had resulted in poor Lydia’s downfall.

Mary chose not to mention this truth to her mother, who refused to think ill of her youngest child.

Mistaking Mary’s silence as a cue to impart a valuable lesson, Mrs. Bennet focused her attention on her daughter. “You must do as I do, Mary, and
listen
attentively to your companions. Do not plan your next comment while others speak.”

Mary grimaced at the flaw in her mother’s reasoning. “But, Mama, how will I know what to say if I am not allowed to ponder my words beforehand?”

Mrs. Bennet threw up her hands. “Conversations must not always be fraught with meaning. Forget your sermons and quotations, and discuss something pretty, like the weather.”

Disappointment lanced Mary at the thought of being confined to trivial subjects. She leaned back and turned to peer out the coach’s window.

Mary did not excel at chitchat. She never knew what to say in response to “pretty” topics. How many times must a group of women comment on the fine weather or the state of the roads?

She likewise despised conversations in which she was required to render her own opinions extemporaneously. Her thoughts seemed to freeze, and she could not think of how to respond. If she did manage to form her words into sentences, she inevitably committed a verbal
faux pas
. Therefore, she had come to lean heavily on the thoughts of great writers and would draw them from her memory as the conversation required.

But this, to her mother, constituted moralizing. Mary simply could not comprehend it. She faced her mother again.

“I believed the discussion of books to be an appropriate topic for a woman of sense and education. I only—”

“I am ever so anxious to make the acquaintance of the sister of your uncle’s new clerk,” Mrs. Bennet interrupted, her mind already committed to the next topic. “The young lady in particular is said to be the epitome of kindness and affability, and your uncle is quite impressed by his new clerk. I hope that you shall not give offense upon this meeting, Mary, for it may prove more important that you realize.”

Upon her mother’s ominous words, fear skittered up Mary’s spine, and her palms began to sweat. She wiped them on her already wrinkled skirt.

“What do you mean?” she asked, trying to read her mother’s intentions from her facial expression. “Why is this meeting so important?”

Mrs. Bennet grinned slyly. “Never you mind that, Mary. I had not the least notion of causing you apprehension. You know I never intend to put pressure on my children. Just mind that you remain on your best behavior.”

Mrs. Bennet had a secret, and that alone would have been sufficient to make Mary feel uneasy, but now she was also unsure of the very basics of social intercourse. She risked embarrassing herself and shaming her mother in a situation for which it was impossible to prepare. Her mother left her no opportunity to plan or readjust.

Mary hoped that her mother might realize her daughter’s predicament and offer more detailed advice, but Mrs. Bennet merely prattled on about the antics of some neighbor or other, leaving Mary to draw the only conclusion she could.

This mysterious meeting was doomed to failure before it ever occurred.

“Oh, Sister,” wailed Mrs. Bennet as she charged forward, narrowly avoiding collisions with two small tables and a sofa. “Have we missed her? I warned Mary that if she did not hurry, the young lady would have come and gone before we ever stepped foot from Longbourn.”