Read May: Daughters of the Sea #2 Online

May: Daughters of the Sea #2 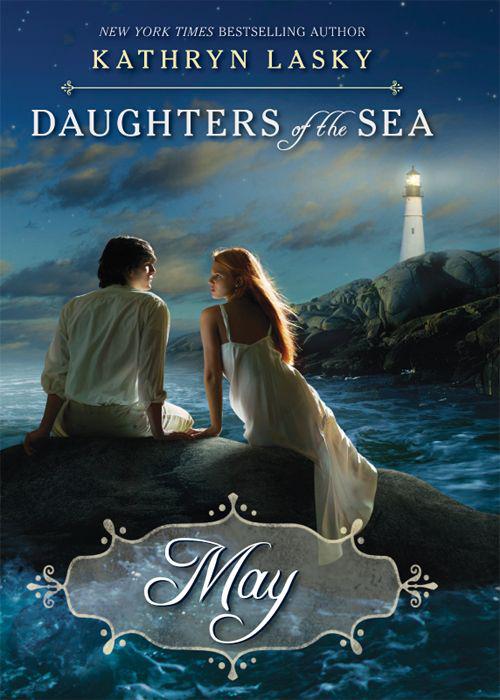 DAUGHTERS
of the
SEA
May

3 SOUNDS WITHIN THE STORM

19 THE SHAPE BESIDE ME

32 FASTER THAN AN EAGLE?

Exultation is the going
Of an inland soul to sea,
Past the houses—past the headlands—
Into deep Eternity—

Bred as we, among the mountains,
Can the sailor understand
The divine intoxication
Of the first league out from land?

T
HE FOG HAD SET IN THICK
after the storm, pushed by a southeast wind. But he couldn’t wait any longer. He had to check his traps. When the nor’easter had blasted through two days before, it had been fierce—almost hurricane force, although it wasn’t the season. A ship had gone down, and two fishing trawlers were lost to the south, somewhere off Georges Bank. No hope for any of those vessels. He would keep his eye out for debris. He was worried about his lobster traps—how many had broken free from their buoys or been dragged by the turmoil of confused winds and currents that followed a storm of such force? If a fisherman was out now it wasn’t the storm itself that was threatening but the aftermath. It was the lost gear, the lost lobsters, the lost money.

His income tending the Egg Rock Lighthouse was barely adequate. But between lobstering and getting the occasional deck job on a trawler he could make just about enough for their life at the lighthouse. He and his wife had never been blessed with children. It would be hard, he supposed, to support a child — not with all the doctoring that Zeeba required. She had just gone to a new doctor last month over in Surrey, who had given her some different stomach powders. They cost, they did! He wondered if a baby would have made a difference for them, for their marriage.

But her numerous afflictions required Zeeba’s full attention; she kept meticulous charts recording her fevers, bodily functions, and pulse rate. Hepzibah Plum always set off for the doctor well armed, dauntingly armed, with information. One doctor even told her that she could be a doctor. That was probably the happiest day of Zeeba’s life. She came back to Egg Rock absolutely hooting about that.

Edgar Plum peered into the fog. So dense. If it
would only begin to fray a bit, unravel the gray so that he could see something—even just the loom, or the dark shadow of the island that lifted out of the fog. He was looking for Burnt Porcupine, where he had set some traps. He caught the fishy smell of seals basking in the thick mists of fog on the ledge, so he must be near.

The chop diminished, and the water now was relatively calm. Everything seemed unusually quiet. No sound of waves slapping into one another. The remaining noises were intermittent and yet distinct — the luff of his sail as it relaxed in this windless pocket of air, the distant disembodied chimes of a bell buoy cut by the whine of a seagull’s cry. All these were familiar to him. But then something caught his attention. It was an odd noise—wood? Possibly. A timber or maybe a lobster trap come loose, drifting about, smacked by something. But suddenly there was another sound, a tone that laced through the fog. He froze at the tiller of his small sailing skiff. It was a sweet babbling sound, so sweet, so merry — so human?

He quickly lowered his sail, put out his oars, and began rowing toward the soft, cozy babbling. As he drew nearer he saw a shape in the water. It was rectangular—a sea chest. The lid was flopped open and only attached with one hinge. On either side a dolphin swam, gently poking it this way or that when it listed too far to one side or the other. Overhead a seagull hovered. Edgar Plum caught his breath as he spied a tiny hand waving in the air.

A baby!
He was almost too frightened to row toward it, but the dolphins, as if sensing his presence, began to steer the sea chest toward him. The fog had blown off, and rags of mist hung in the air as he looked down and saw the sweet face of an infant with red curls like a luminous cloud of dawn light.

When he picked up the infant he saw that it was wrapped as snug as could be in a gray knit blanket covered by an oilskin cloak. The baby was a girl, as he had suspected when he first saw her. He made a sling so he could carry her neatly under
his sou’wester jacket. Before he raised his sail, he reached over and fetched the chest and its lid from the water. When he brought it over the gunwales he could see letters carved on the lid’s top—HMS
Resolute.

“HMS
Resolute
! My word!” Edgar Plum whispered to himself. That was the ship that had gone down off Georges Bank. He stared into the wind that had just sprung up now from the northwest. It had reversed, for the wind had been blowing for the last two days out of the southeast—
driving this baby right to me,
he thought. He was so brimful of joy that he nearly whooped out loud. It was meant to be. The report said everyone was lost. No hope. But this was hope.
We’ll call her Hope,
he thought.

They would not call her Hope. When Edgar got home with his bundle, Hepzibah Plum was hanging her head over a pot of steaming camphor broth to treat her lungs.

“Zeeba! Zeeba! Come out from under that tent of yours. I got a surprise for you.”

“Hold your horses.” Her voice floated out from the toweling that covered her head and trapped the vapor. “Just another minute.”

But it was only another few seconds before the baby cried out. Zeeba tore the toweling off her head. Her face was red and blotchy. “What’s that?” She had a thin, angular face, and her cheekbones protruded so that they cast shadows into the hollows beneath them. Around her mouth were vertical crinkles as if invisible drawstrings needed to be pulled for any utterance.

“What in the name of Jesus have you brought home, Gar?”

Hepzibah Plum took mincing steps toward her husband. The drawstrings had pulled taut again, and the hole of her mouth had closed tight. Gar looked
at her, expecting an “ooh” or an “aah” of astonishment and wonder. But no sound was emitted. In fact, her lips pressed tighter together.

You won’t need no more medicines. No more powders,
Gar thought. “God has finally blessed us with a child.” A dark look seeped from Zeeba’s eyes, but Edgar was oblivious. “We’ll call her Hope.”

Zeeba’s brow contracted in a frown. The vertical lines between her eyebrows deepened. “No! We’ll call her Mabel.”

But Gar knew it was not because Zeeba was honoring her mother. She wanted people to think that she, Hepzibah Plum, was not barren but had at last given birth. She was putting her mark on the child. It was in that moment that Gar decided that he would never tell his wife the truth about where he had found this baby.

“I was down near Crockett Cove.” He decided he had to make it as far away as possible.
“A woman down there died in childbirth; no relatives, nothing.”

The word went through Edgar like an electrical current. “She ain’t no bastard, Hepzibah. Don’t you ever call her that! She’s ours, and we’ll treat her that way, like she was born to us. You and me.” He took a deep breath. “And we’ll call her May for short.” Hepzibah blinked at her husband. She had never heard him speak in this low, firm voice before. It almost scared her. “We got to feed her now. She’s hungry. We got any milk?”

“If you go out and milk Bells we do.”

He started to hand the baby to his wife. She backed away. “I got to go milk the cow, Zeeba, you just said so.”

This was the first time in their ten years of married life that Hepzibah Plum had ever milked their cow. As she walked out the door of the lighthouse she turned and said, “You know, I thought I was getting a mite better in my camphor tent there.”
She nodded toward the pot simmering on the stove. “But this interruption hasn’t helped.”

“She’s not an interruption, Zeeb, she’s our daughter. She’s May Plum.”

Zeeba pressed her colorless lips into a firm line and turned to the door.

I
T WAS A LATE-SEASON NOR’EASTER.
The wind screeched round the squat frame house, and the clapboards moaned periodically as if in reply. Every now and then the light tower that thrust upward sixty-four feet into the storm-rent sky seemed to sway just a bit. But it had been there for decades and had not yet been felled by any weather. May Plum sat in a pool of lamplight, darning a sock. Her mother, across the kitchen in her rocker, had put a compress over her eyes.

“You know, if my eyes hadn’t got so poor I’d be helping you with them socks. I got to go to that new doctor that’s come to the village as soon as this weather breaks.”

“It ain’t going to break for the next few days, Zeeb,” Gar called from his chair. “This wind done set in. It’s blowin’ like …” May kept her eyes on the sock. She could feel her mother tense without looking at her. She knew what was coming, but her father caught himself just in time and swerved mid sentence to avoid cursing. “Blowin’ like stink,” he concluded. May knew what would happen next. She knew them, this room, this island all too well. Nothing ever really changed. She could predict every sigh and groan of her mother, every word her father might or might not speak, depending on how much he had drunk. She heard his sleeve brush the table and she knew that it would be followed by the splash of whiskey being poured into the mug.

Nothing ever changed, not even the seasons. It might be late for nor’easters but in truth, May realized, there was just one season in the lighthouse—winter. It was always dark yet always too hot inside because of her mother’s insistence on keeping the fire in the cast-iron cook-and-heat stove going. Spring might come, and while others flung open their
windows and hung out their linens to catch the fresh breezes for a good airing out, Zeeba did not, for she was deeply suspicious of drafts. She regarded these diabolical streams of air as a kind of roaming executioner that could strike anytime. She was always on the alert for an insinuating breeze that in her mind was as pestilent as a rat-borne plague, as infectious as a flea-ridden rabid dog.

Who Will Catch Us As We Fall by Iman Verjee
Marriage Of Convenience: A BWWM Billionaire Love Story by Cher Etan, BWWM Club
Love in a Fix by Leah Atwood
All the Light There Was by Nancy Kricorian
Lord of the Changing Winds by Rachel Neumeier
Defiance (New Adult Romance) (Isaac & Maya) by Chase, Ember
The Adventures of Jack Lime by James Leck
Schasm (Schasm Series) by Ryan, Shari J.
ModelLove by S.J. Frost
Eloise by Judy Finnigan
Our partner