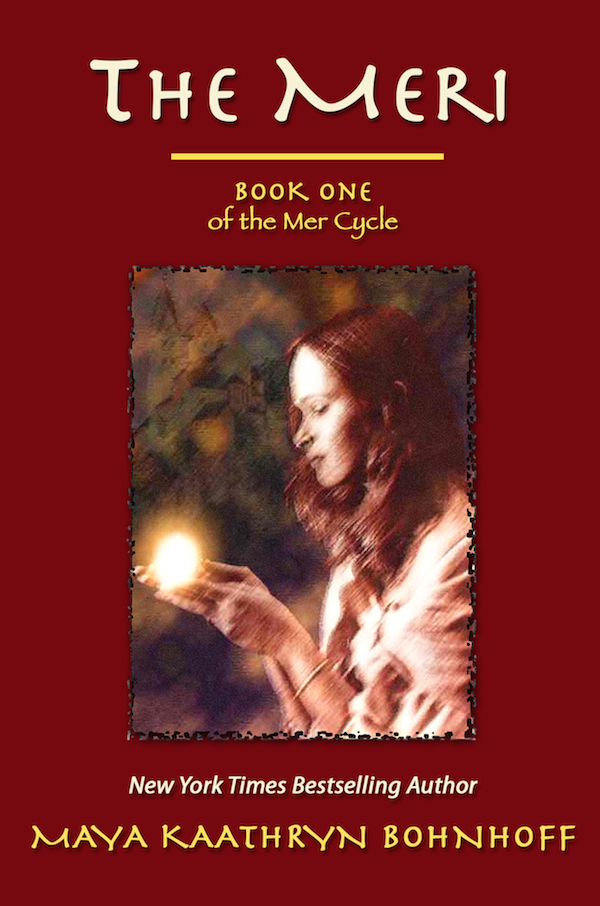 Book One of the Mer Cycle

To my father, who fed my imagination much rich food.

To my mother, whose only reaction was, “Oh, Hank! You didn’t!”
And to the makers of those keen little nightlights that keep bug-eyed monsters
at bay.

To my family: my husband Jeff Vader, All-Powerful God of Biscuits and Toast; my children — Alex, Kristine, and Amanda... and newest daughter, Nura Itzel (way to go, Alex!). To my God-family: Vern, Jan, Kaathlyn and Andrew, Zee, Chi, Erik ... and Heather who has gone on ahead. And to all those who believe in me even when I don’t.

To Stan Schmidt of
Analog
magazine for being my angel.

To Marc Scott Zicree for being an inspiration.

To Bill Evans for giving me an extra push.

And to Himself, for putting the love of writing in my soul. 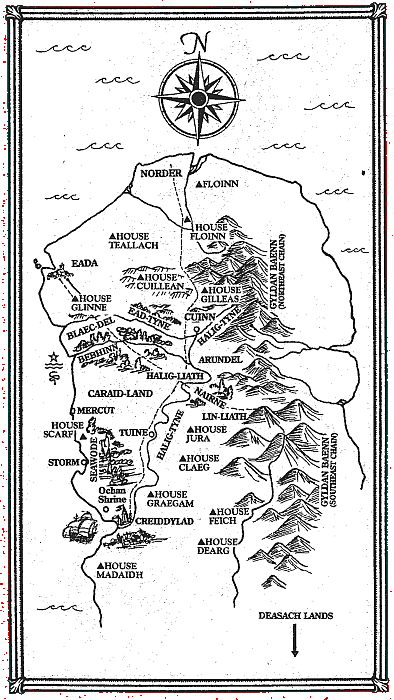 There is a bridge between the finite and the
Infinite. This Bridge is the Meri, the Spirit of the Spirit of the Universe,
which men call God. Nothing may cross that Bridge: neither day nor night, nor
old age, nor death nor sorrow nor evil nor sin.

Only the pure of heart may cross that Bridge, because the
world of the Spirit is pure. In the crossing of this Bridge, the eyes of the
blind will see, the wounds of the ailing will be healed, and the sick Man will
become whole.

To the crosser of the Bridge, the night becomes day,
because in the world of Spirit there is everlasting Light.

It was not lost on Meredydd-a-Lagan that she was the only
girl at Halig-liath. It was brought home to her every morning at Assemblage
where she stood, front and center in the huge cobbled yard, Surrounded by the
other Prentices—boys, all of them.

It hadn’t been so bad when she was younger; she had been
almost indistinguishable then—cropped chestnut hair, tunic hung loosely on a
slender, angular frame. But she was fifteen now, and in the last year, many
things had grown apace with height and hair.

This morning was particularly bad; she felt completely
alien, awkward and unwelcome. In the warmth of a fine spring morning, she stood
out from the others like a briar among roses—her bare arms hairless, her light
tunic betraying mounds and bends and curves no other Prentice possessed. She
sensed eyes on her as they murmured their congregational prayers and prepared
for a day of lessons.

She dared to glance up at the Osraed in their gallery high
up on the imposing stone wall of the Academy. They were looking at her
too—Ealad-hach, Calach and her guardian, Osraed Bevol. She got Osraed Bevol to
meet her eyes and he smiled. She forgot her awkwardness in an instant and filed
away with the others for classwork.

“She’s gotten to be such a tall girl,” said Osraed Calach. “Taller
than some of the boys.”

“She’s still a girl,” Ealad-hach reminded him, and glanced
at the silent, smiling Bevol. “She will always be a girl. She should be training
in the domestic arts. Training to be the wife of an Osraed and the mother of
Prentices.”

“And why,” asked Bevol, “should she do that when she could
become Osraed, herself? She has absolutely no talent for the domestic arts,
Ealad. None. But she is already practicing the Divine Arts with some skill.”

“You should not let her practice.”

“Why not? You let your personal favorite practice and
Meredydd has shown far more natural talent and inclination than he has.”

“Ah?” Bevol pressed, pointing a finger at that oversized
feature. “Ah now, admit what you cannot deny. Meredydd is second to none in her
class.”

“And it goes to her head. A bad condition for a girl.”

“
If
it went to her head
and
if
she were an ordinary child—of either
sex—I would agree, but neither is true.”

“The Meri will not accept a female Prentice, you know that.”

“I know nothing of the sort. There is nothing in the Books
that denies Prentice-ship to girls.”

Osraed Calach cleared his throat. “Do you intend to abandon
your students in favor of this ancient argument?”

Osraed Bevol smiled and wagged his head. Snow-streaked
copper, his hair and beard rippled with the motion, cascading over the azure of
his robe. “I will never abandon my student,” he said pointedly, and led the way
from the gallery into the Academy.

Meredydd was not watching Aelder Prentice Wyth scratching
illustrations of aislinn symbology on the whitewall. She was watching a spider
apply warp and woof to the corner of an open window. The web had been taking
shape for the entire morning and was nearly complete. Sunlight ran like blazing
golden liquid down its pristine fibers—more delicate, more gleaming, more
glorious than the finest silk. Meredydd imaged herself in a robe of the
stuff—so fine and light.

She could see herself upon the sill, the size of a
butterfly, lying back in the sleek, shining hammock, where bees would bring her
nectar and ambrosia and the spider would play duans for her upon a harp of his
own design. She could almost hear its song—light as down, shimmering, whispers
of melody.

It was a shame, she thought, that the Arts didn’t run to
miniaturization. Then again, maybe they did and it just wasn’t something the
Prentices were permitted to know. After all, it wouldn’t do to have them
practicing Shrinkweaves on each other. The thought made her grin.

“Prentice Meredydd. Could you tell me what you are studying
that you find my lesson beneath your notice?”

She jumped quite nearly from her skin and blinked up into
the Aelder’s stern face. “Why—aislinn symbols, Aelder.”

“Aye, that is what the rest of us were studying,
cailin
. But you, I think, were not.” He
straightened and turned toward the whitewall, and Meredydd thought how spiteful
he was to remind her (and everyone else) that she was a girl.

Cailin
, he called
her—but only when Osraed Bevol was out of earshot. He had used the word once in
the Osraed’s presence and Bevol had referred to him as “boy” for a fortnight,
refusing to dignify him by using either his name or his title.

At the whitewall, now, stood Aelder Prentice Wyth and lifted
a bony, linen-clad arm to point at the group of symbols rendered there in blue
oilstick. They were very well drawn, Meredydd had to allow. “Meaning,
Prentice
Meredydd. Give this aislinn meaning.”

That was easy. “The horse,” she said, “is life, events.
Strong emotions. The rearing horse especially connotes difficulty in
maintaining control of one’s destiny.”

Wyth’s lips pursed. “And this?” His finger tapped a set of
wavy lines.

“Water in motion,” she replied. “Emotions, such as love or
great passion are symbolized thusly. A stormy sea would indicate violent
emotions or a fear of them—especially, a fear of passion.”

“At least you studied.”

He peered at her, narrow-eyed. “A man dreamed,” he said, “that
he went upon Pilgrimage. And when he reached the shore of the Western Sea, he
lay upon the sand and slept. When he awoke, a beautiful cailin urged him to
rise up and follow her into the sea. He rose and walked after her and entered
the water and
did not get wet
.” He
emphasized the last words with a smile and folded his arms across his chest. “Interpret
this aislinn.”

Meredydd glanced quickly about the semi-circle of Prentices
and wriggled uncomfortably on her bench—not because she couldn’t interpret the
dream, but because she
could
interpret it
and suspected it was the Aelder’s own.

“Are you certain, Aelder Wyth, that you wish me to interpret
this
dream?”

“Why else would I have directed you to do so?” he asked
sarcastically and drew a snicker from the other Prentices.

Wyth held out the bluestick. “Come to the wall and
illustrate your Tell for the class.”

She swallowed and gave the teasing spider web a last,
longing glance, then rose and went forward. She took the bluestick, erased the
existing symbols with the blotter and began her illustration.

“Pilgrimage,” she said, drawing the symbol:

“—is the journey toward the heart’s desire. The Sea (

) is where the journey leads, to the
Pilgrim’s Post from which the true seeker awaits the Meri (

) is forgetfulness or a lack of acceptance. The maiden who wakes the
sleeping Pilgrim (

) is someone or
something which provides the catalyst for the continuance of the quest — a
prodder, such as the conscience. The conscience wakes the sleeper and he enters
the relationship (

) with the Object
of Pilgrimage but...”

1 A Spirited Manor by Kate Danley
Parky: My Autobiography by Michael Parkinson
The Tycoon's Red Hot Marriage Merger by Christine Glover
Lucky Break by Liliana Rhodes
Deity by Theresa Danley
The Objects of Her Affection by Sonya Cobb
A Loving Scoundrel by Johanna Lindsey
Young Miles by Lois McMaster Bujold
Guns Of Brixton by Mark Timlin
Two Lives by William Trevor
Our partner