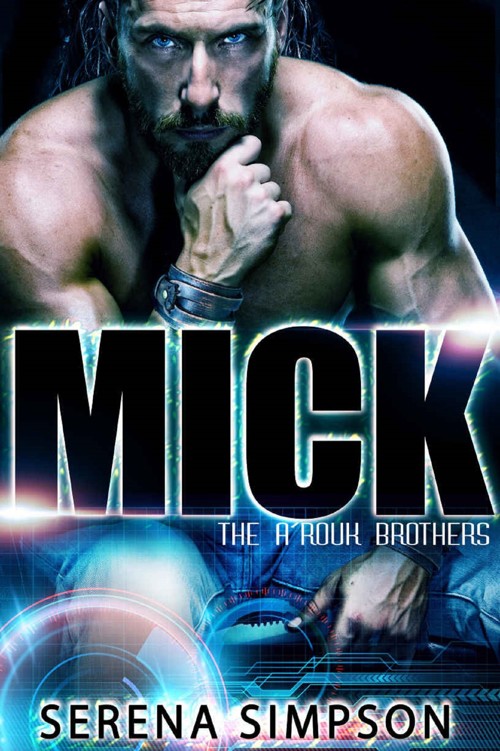 Want more of these characters?

I want to thank my daughter for being there in the ups and downs of my life as well as the writing of this book. I want to thank Keriann, my editor whose faith in me humbles me.

I also want to thank my fans you waited a long time for this book to come out, I am humbled that you want to read it. I thank each and every one of you for loving the original series Love Me Harder and the encouragement you have given me as I wrote the first book in the spin-off series. You are the best fans ever!

This is a work of fiction. Names, characters, businesses, places, events, and incidents are either the products of the author’s imagination or used in a fictitious manner. Any resemblance to actual persons, living or dead, or actual events is purely coincidental. This book is licensed for your personal enjoyment only.

Soul-Bonded to the alien
Book 1

Shifters on the run

Once you’ve read Mick, I hope you will take a few minutes to leave me a review. Amazon love’s reviews so the more you leave, the more they eat it up.

Look for me I’m happy to connect with all.

Change. Dante spent centuries both anticipating and dreading this day. With a wave of his hand, the red-haired woman entered his vision. She tossed and turned in a bed as she dreamed of Mick and the brief glance she had of him before he was pulled away and chained. The dream was of her first encounter with him. It was highly unlikely, no, impossible, but in those minutes she felt her life shift, she wanted him.

“No,” Jaz whimpered holding out her hand to him. She needed him and didn’t even know why. “Please,” the word escaped her lips in the midst of her tortured dreams.

She kicked the covers as she remembered the blue of his eyes. The expanse of his muscles. Everything about him called to her, made her want to give up and simply settle in his arms.

“No!” her mind protested loudly. “That’s not who we are. It’s not what we are. We were made to die, and that’s what we will do.”

She flipped in her bed and fought with the covers as if they were trying to choke her to death before she finally kicked them to the floor. A deep breath escaped her like she just won a battle.

“Clone,” she heard the word and shook her head. She was a clone, made for nothing more than harvesting—a fancy word that meant they would kill her. Maybe her organs would go to help the Original survive, or maybe she would just burn. When you were dead, it didn’t matter.

She stopped struggling. Dante’s words had haunted her for days, now they gave her peace. Indeed, let’s hope we live to enjoy the fallout.

She fell into a peaceful slumber as once again she dreamed of the male with the bright blue eyes. “Mick,” his name came softly on a sigh of pleasure. He was pulling her into his arms and whispering words of forever.

She was not what he anticipated, but then again how was he supposed to anticipate his brother’s mate.

Mick’s body convulsed as he stubbornly refused to cry out. The male behind him beat him although there was not a mark on his body. The Darkness was more insidious than that. It beat him, tortured him mentally, yet he was still enduring. Soon, the whip would come out signaling the beginning of the end.

The Darkness. Dante bared his fangs and growled for a minute. It was the one thing that plagued him and his brothers constantly waiting for them to make a mistake. Waiting for one of them to find their mate. That was their weakness, and it waited for them to meet the one female who would call to them. Then with glee, The Darkness would destroy them one at a time. Mick should have been safely in the chains Dante put him in, but his brother was stubborn and he traded his life for that of his mate.

Mick stood chained on the planet Sylica—the hell planet. Around him stood the Army of Darkness waiting for the moment he would give in. At his feet were the fires of hell burning him repeatedly. His body would heal, and the fires would burn him again. The executioner stood behind him.

“She belongs to us and so do you.” The male with the whip spoke before he brought it down to his back again.

Mick said nothing. To acknowledge them in any way may mean placing her in jeopardy. Her, Jaz—his mate. The female he only saw briefly before his brother had him dragged off and placed in chains. He felt the whip across his back again, but he was too preoccupied with exploring her lovely body to pay much attention to it.

He thought of her looking up at him. Green eyes the color of the dewy grass in the morning giving him a look of pleasure for something he had done. He bent over and kissed her neck needing to simply get a small taste of her sweetness. He imagined her soft voice in his ear or her hand on his arm.

She was so small and petite compared to him. Not even six foot he bet. He trembled at the thought of her arms holding him tight. The executioner laughed thinking he was breaking him.

Mick would never break. They may kill his body, own his soul, but they would never have his mate because he wouldn’t give her up.

“No more,” Dante growled. He would no longer stand there and be a silent spectator to the agony his brother was suffering. “It ends now.”

Mick looked up and smiled. It was gritty and bloody, but he didn’t care as his brother walked through the fires of hell. They dared not touch him; his clothes looked as fresh as when he dressed this morning.

The minions of Darkness complained, protested that Dante didn’t belong there. Mick was now theirs to torture however they chose. The executioner dropped the whip and stood back. Smart male. Everyone knew they could die. Yes, the setting was Mick’s mind but what happened here was real, and if they died here, their death would be final.

“You can’t come here.” The words came out warped as if the tongue belonged to a serpent and not a man. The male speaking was a minion of The Darkness acting on its behalf.

Dante stopped and looked around at those gathered.

“Would you like to stop me?” Dante’s voice was whisper soft and all the deadlier for it.

“Killer.” The word traveled through the Army of Darkness on an air of its own. It was said reverently, fearfully.

Mick would have laughed if he wasn’t feeling the full effects of the pain trying to kill him. He was on a planet occupied by the most notorious killers in the galaxy, and each one of them was scared of his brother who stood by his side.

“Your time is up. Mick is still sane and whole.”

A roar went up; they would not release him.

“Dante,” Mick whispered, not wanting anything to happen to his brother. He knew this day was coming when he laid his eyes on his mate. He would not have Dante forfeit his life so he could live.

He closed his mouth because his brother was right; he had too many responsibilities and very little time for fun in his life.

One brave soul—the executioner—stood up. “If your brother leaves here alive The Darkness will require my soul.”

He raised his whip—the soul killer—the one he used to end lives for centuries and brought it down over Dante’s back because he stepped between his brother and the whip.

The crowd gasped as one as they waited for him to hit the ground, no one survived the soul killer. The whip wrapped itself around his body allowing Dante to get a firm grip on it. He pulled the executioner to him until the male couldn’t move.

“You should have feared me more.” He reached out, and the male died. The crowd retreated, eyes wide in disbelief.

Mick nodded once before his unconscious body fell into his brother’s arms.

Centuries of planning may not have been enough.

“Jaz, are you up? Breakfast is on.” Brook’s voice echoed up the stairwell giving Jaz a feeling of calmness. Knowing her sister was there for her made each day a little easier.

Brook was born several hundred years ago and placed in cryo because she had a rare genetic disorder that didn’t have a cure. Her parents traded their lives for her so she might have a chance to live. Jaz was the clone who was ordered to bring her out of cryo. Now Brook was the friend she never had.

Things changed for them when Brook almost died; the Patron singled her out for death and sent his assassins after her. He is one of the biggest thieves in the history of their new world, stealing what he wanted and killing anyone who defied him. Most considered him to be a benefactor who helped the poor, but those whose lives he touched knew better. He almost succeeded in killing Brook. Jaz used every medical skill she gained over her lifetime to save Brook, and from that day forward they became sisters of the heart.

She took a look at herself in the mirror. No one was going to give her any awards for beauty. Most days she barely registered how she looked. Clones weren’t supposed to take pride in their reflections. They were made to be the most optimal version of the Original. The Original being the genetic stock from which she was cloned. While she never took pride in her looks, she did try to look decent when she walked out to meet others.