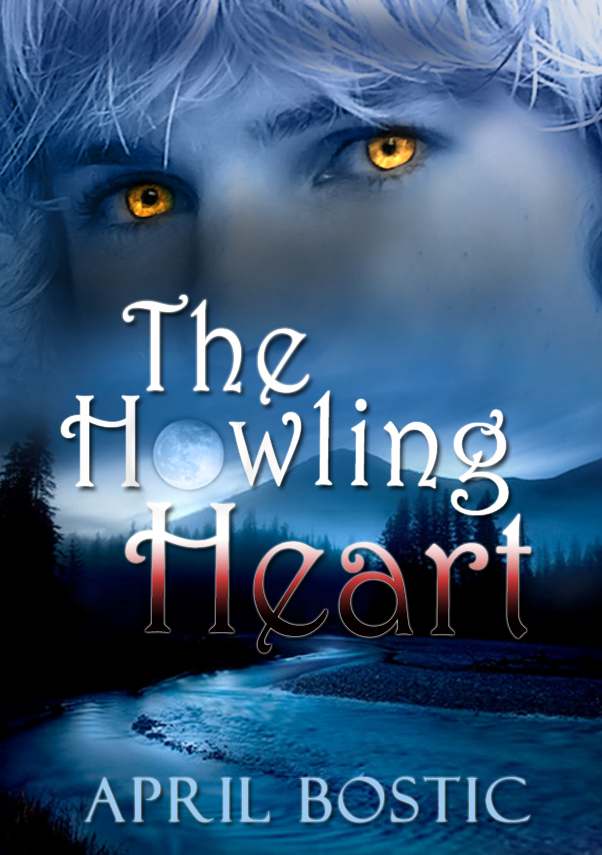 The Howling Heart is COPYRIGHT 2011 by April Bostic. This is a work of fiction. Names,

characters, places, and incidents are the products of the author’s imagination or used fictitiously.

All rights reserved. The reproduction or utilization of this work, in whole or in part, in any form

by any electronic, mechanical or other means now known or hereafter invented is forbidden

without the written permission of the author.

To my best friend and my biggest fan,

Thank you for reading all of my stories and believing in my writing.

But most of all, thank you for always supporting me.

This book is dedicated to you, Mom.

Last night a wolf howled for me. The deep haunting sound pierced through my dreams

and pulled me from the infinite black void of my subconscious. The howl took hold of my soul

as I slept and forced me to relive a distant memory from my childhood. It was a memory I think

the wolf didn’t want me to forget.

In a world of vivid color, suddenly I was ten years old again. It was mid-summer in Black

River, Colorado, and my family and I were vacationing in our cabin in the Rocky Mountains. I

had hoped this vacation would be pleasant, but had doubts when my parents’ bickering started in

the car on our way to the cabin. While sitting quietly in the backseat with my nose buried in the

hair of my favorite old doll, I silently wished they would be nice to each other.

I was in my bedroom when I heard them arguing downstairs. I was used to my parents

not getting along, but this time I had decided I didn’t want to be around them any longer.

Escaping to the dark quiet of my bedroom closet wasn’t far enough. I needed to go further away.

I needed to
run
away. While they were arguing, I grabbed some clothes, toys, and an unopened

juice box and smashed them into my suitcase.

living room until I was about to pass the kitchen. My parents’ voices gave me pause and I

pressed myself against the nearest wall.

As I peeked into the kitchen, I saw my mother slamming pots and pans down on the

counter and stove. She did this as she emphasized her points during the argument. The back-and-

forth yelling continued, but I guess the noise from the cookware irritated my father because he

grabbed one of the pots from her. His dark eyebrows knit tightly together and his usually cool

blue eyes blazed as he glared at my mother.

My mother’s hazel eyes widened in shock and she hit his arm. “Don’t you
dare
snatch

that from me, David!”

Now was the perfect time to escape. They were so busy arguing and glaring at each other,

they were oblivious to the fact their young daughter could hear every word. I started to cry when

they mentioned my name. My father blamed my mother for being too strict with me, and she

blamed him for being too lenient and allowing me to make a mess of the house. I didn’t think I

control or else I’d give myself away. I felt wetness on my cheeks and it dribbled down to my

mouth. I licked my lips and tasted the salty tears. I thought to myself,
They’ll miss me when I’m

gone but I won’t come back.

I turned around slowly and crept through the living room and out the front door. I still

heard them yelling as I ran down the front steps. I don’t know if the door made a loud sound

when I closed it, but I heard myself cry and my sneakers pound against the grass as I ran toward

Dirt, sticks, and leaves covered the forest floor. There were so many trees, I ran in

zigzags to avoid running into one. For a moment, I stopped to look where I was going. I stood in

the middle of the forest surrounded by nothing but trees. Everything looked green and brown,

and a misty fog swirled around me. I cast my gaze skyward and saw a dark canopy of leaves.

Only slivers of sunlight and patches of indigo sky crept through the branches. The sun was

setting and I walked aimlessly in the shadowy light of dusk.

I was thirsty from running, so I sat against a tree to retrieve my juice box. As I popped

the plastic straw through the foil opening, I looked around to see if I was alone. I knew animals

lived in the woods and I didn’t want any of them to take me by surprise. I looked down at my

sneakers and noticed the bottoms caked with dirt. My mother would be so angry if I walked into

the cabin wearing dirty shoes. I wondered if I should go home or keep to my plan to run away.

Since I had already run away, I wondered what to do next.

The forest was surprisingly quiet. The only sounds were the birds in the trees above me,

and my own breathing intermittent with the slurping from my juice box. I was on alert, my eyes

or something coming toward me. At first, I thought it was one of my parents. I was prepared to

run because I didn’t want to go home. I gasped when the mysterious visitor came into my line of

vision. It seemed to emerge from behind an enormous tree. With its coloring, there was no way

for it to camouflage itself. I dropped my juice box in my lap and stared with wide eyes at the

It stood a few yards away and stared at me. Then it cocked its head and whimpered. I was

more intrigued than afraid, and the feeling seemed to be mutual. I expected the puppy’s owner to

be within close distance, but no one ever came. The dog approached me cautiously with its head

lowered. It would jump back every time I made any sudden movement like touching my hair or

I always wanted a puppy, but my father never let me have one because my mother was

allergic. I remembered she wasn’t here, so this moment would be my only chance to have a pet.

I decided not to move. As the puppy walked closer to inspect me, I saw it was completely

white except for its black nose and golden eyes. They stood out eerily in the dark forest and

seemed to glow softly. The animal stopped a few feet away from me as if it was trying to keep its

I encouraged it by getting to my knees and beckoning to it. “Come here little one. It’s

The puppy whimpered again and took another step toward me. I knew dogs didn’t drink

juice, but that didn’t stop me from offering my half-empty juice box.

Another minute ticked by until the dog was close enough for me touch. Once again, it

hesitated. After a couple seconds, we finally made physical contact. I touched the tip of its

muzzle. Its nose was a bit cold but it wasn’t wet. Its body flinched, but it didn’t move away. I

knew I had earned its trust when it allowed my hand to glide up its muzzle to the top of its head.

Its white fur felt like sleek bristles. My hands ventured behind its ears and both cheeks. To my

surprise, the puppy’s tail began to wag. Seconds later, it jumped up and rested its head on my

Before the puppy arrived, I worried about being alone in the forest. I no longer had to

worry because I had a new friend.

“I ran away,” I said as I stroked its back to the tip of its tail. “I’m tired of my parents

yelling all the time, so I thought it would be better if I left. I’m always making a mess and my

mom says she’s tired of cleaning up after me. I try not to spill things, but sometimes I do it by

I talked to the dog for at least an hour while it sat in my lap. I discovered
it
was actually a male. He let me know with a growl after I commented, “You’re a pretty girl.” Then he rolled

onto his back to prove his sex. I apologized in laughter, and a few licks to my face let me know

he had forgiven me. His playful licks lifted my spirits, but my happiness didn’t last long. Panic

set in and I started to reconsider my plan.

“Maybe I should go home now. It’s getting late, my parents are probably worried about

me, and I’m hungry. I forgot to pack some food.”

I stood and took a few steps in the direction I thought would lead me home. My new

“What is it?” I laughed. He growled softly as he pulled me along. “Oh, I see. You want

me to follow you?” He finally released me, looked into my eyes, and barked.

I grabbed my suitcase and followed the puppy as he led me through the forest. I hoped I

would see the cabin soon. In an attempt to ease my fears, I pretended I was on an adventure.

Every now and then, my friend would look back at me to make sure I was following.

“Do you know where you’re going?”

He stopped suddenly and turned to look at me. He let out another high-pitched bark and I

smiled because it was almost as if he answered me with a ‘yes’.

The puppy and I had established a bond of trust, so I didn’t expect him to lead me to

danger. Unfortunately, in my naivety, that’s exactly what he did. We arrived at a clearing with a

dark river running through it. Instantly, my panic increased threefold when I realized I was

deeper into the forest.

“What’s going on? Where are we?” He turned toward me and I knelt in front of him. We

snuggled again and he licked my face. “I need to go home now.” He whimpered and licked my

A menacing growl cut my sentence short. I looked toward the sound and saw a big

animal baring its sharp teeth. As it stalked toward us, more animals emerged from behind the

trees. I clutched my friend to my chest protectively. I watched
ational Geographic
and I knew these were not dogs…they were very large
wolves
. There was a hill on the other side of the river and more wolves appeared as if they materialized from the darkness.

I heard another whimper but this one came from me. I shivered in fright, and the puppy

squirmed in my arms. I released him quickly and stood in surrender. I turned full-circle and

realized the wolves surrounded me on all sides.

My voice wavered as I begged the predators to show mercy. “Please don’t hurt me.”

My breath came out in rapid pants and I dropped my suitcase. My feet shuffled as I tried

to figure out my next move. I had nowhere to run and no escape.

continuously. My lips trembled in fear and I scrambled backwards. I didn’t care if I was moving

closer to another wolf; I just wanted to get away from the gray one slowly approaching me.

The puppy barked at the gray wolf and I silently prayed for him to return to my side. He

was too small to save me from a dangerous wolf pack. To my surprise, the approaching wolf