Read Midwinter of the Spirit Online 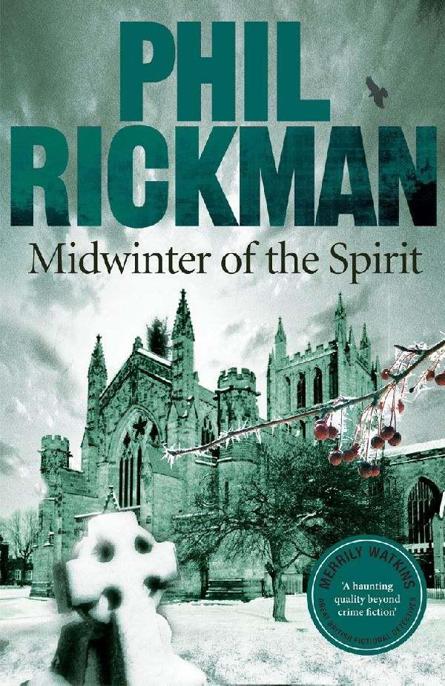 PHIL RICKMAN
was born in Lancashire and lives on the Welsh border. He is the author of the Merrily Watkins series, and
The Bones of Avalon
. He has won awards for his TV and radio journalism and writes and presents the book programme
Phil the Shelf
for BBC Radio Wales.

Coming soon...
The Secrets of Pain

OTHER BOOKS
The Bones of Avalon

First published in Great Britain in 1999 by Macmillan.

This paperback edition first published in Great Britain in 2011
by Corvus, an imprint of Atlantic Books Ltd.

The moral right of Phil Rickman to be identified as the author of this work has been asserted in accordance with the Copyright, Designs and Patents Act of 1988.

All rights reserved. No part of this publication may be
reproduced, stored in a retrieval system, or transmitted in any form
or by any means, electronic, mechanical, photocopying, recording,
or otherwise, without the prior permission of both the copyright
owner and the above publisher of this book.

This is a work of fiction. All characters, organizations, and events
portrayed in this novel are either products of the author’s imagination
or are used fictitiously.

27. Protect Her This Night

T
HIS IS WHERE
it walks…

Washing her hands, Merrily looked up and became very still, convinced in this grey, lingering moment that she was seeing the
imprint
.

What she saw, in the cracked and liver-spotted mirror, was a smudgy outline hovering beyond her left shoulder in the women’s lavatory with its stone walls and flagged floor. Through the bubble-glass in the door, a bleary ochre glow seeped from the oil lamp in the passageway where, for some reason, there was no electricity.

This was where it walked, Huw had explained in his soft, mat-flat Yorkshire voice – David Hockney on downers.

Rumoured, apparently, to be the shade of a preacher named Griffith who heaped sermons like hot coals on hapless hill-farming folk towards the end of the nineteenth century. But also known as the Grey Monk because this was what it most resembled, and this was where it walked.

Merrily focused on her own drained face in the mirror.

Was this where madness began?

‘Are they often caught short, then?’ the ex-Army chaplain, Charlie Headland, had asked a few minutes earlier, while Merrily was thinking:
Why do they always walk? Why don’t they run like hell, in desperation, looking for a way out of this dismal routine?

The course tutor, Huw Owen, had blinked, a crumpled old hippy in a discoloured dog-collar.

‘No, I’m serious,’ Charlie insisted. ‘Do any of them still feel a need to pee, or do they leave all that behind?’

‘Charles…’ Huw being patient, not rising to it. ‘There hasn’t always been a lavatory at the end of that passage.’

Huw would laugh, sometimes wildly, in the pub at night, but in the stone-walled lecture room he never lost his focus. It was about setting an example. Outside of all this, Huw said, you should always strive to live a full, free life but in ‘Deliverance’ remain watchful and analytical, and careful not to overreact to something as innocuous as an imprint.

This whole Grey Monk thing had arisen because of Huw needing an example of what he meant by ‘
imprints
’.

As distinct from ‘
visitors
’, who usually were parents or close friends appearing at your bedside or in a favourite chair on the night of their deaths, often a once-only apparition to say: Everything is OK. Or ‘
volatiles
’ – loose-cannon energy forms dislodging plates and table lamps, and commonly but some-times inaccurately called poltergeists.

When this place was a Nonconformist chapel, Huw had told them, the present women’s toilet had been some kind of vestry. Which was where Griffith the preacher – apparently helpless with lust for a married woman in Sennybridge – had been drinking hard into the night, was subsequently seen striding white and naked on the hill at dawn, and then had been found dead back here, his head cracked on a flagstone, the room stinking of brandy.

Sure – these things happened in lonely parishes. Merrily pulled down a paper towel and began to dry her hands, not hurrying – resisting the urge to whirl suddenly around and catch Griffith, crazed and naked, forming out of the dampness in the wall.

She would
not
be bloody-well scared. She would observe with detachment.
Imprints
were invariably harmless. They appeared, vanished, occasionally messed with the atmosphere, but they never accosted you. They were, in fact, unaware of you, having no feelings, no consciousness. Their actions rarely varied. They appeared like a wooden cuckoo from a clock, only silently. And, no, they did not appear to feel the need to pee.

If an
imprint
responded to you, then it was likely to be something else – a
visitor
or, worse, an
insomniac
– and you had to review your options.

‘And how, basically, do we know which is which?’ big, bald Charlie Headland had demanded then. Charlie was simple and belligerent – Onward, Christian Soldiers – and needed confrontation.

‘We have tests,’ Huw explained. ‘After a while, you might start feeling maybe you no longer have to apply them. You’ll feel you know what’s required – been here before, already done that. You’ll feel you’ve attained a sensitivity. Now you’ve got to watch that temptation, because—’

‘No-oo.’ Huw stared down at the holes in his trainers. ‘It’s not necessarily the same thing. In fact I’m inclined to distrust people who go on about their powers. They start to rely on what they think of as their own ability, and they – and anybody else who relies on what they say – can be deceived. I was about to say I’ve found it dangerous to rely too heavily on your perceived sensitivity. That feeling of heightened awareness, that can be an illusion too. We still need, all the time, to stay close to an established procedure. We need that discipline, Clive; it’s one of the Church’s strengths.’

Charlie the chaplain nodded briskly, being all for discipline and procedure.

‘Make sure you put reason above intuition,’ Huw said. ‘Beware of inspiration.’

‘That include divine inspiration?’ Clive demanded.

Huw directed a bleak blue gaze at him. ‘How do you know when it’s divine?’

Clive stiffened. ‘Because I’m a priest. Because I have faith.’

‘Listen, beware of being too simplistic, man,’ said Huw coldly.

They’d all gone quiet at this. Dusk clogging the grimy, diamond-paned window behind Huw, melding with mountains and low cloud. Late October, long nights looming. Merrily wishing she was home in front of the vicarage fire.