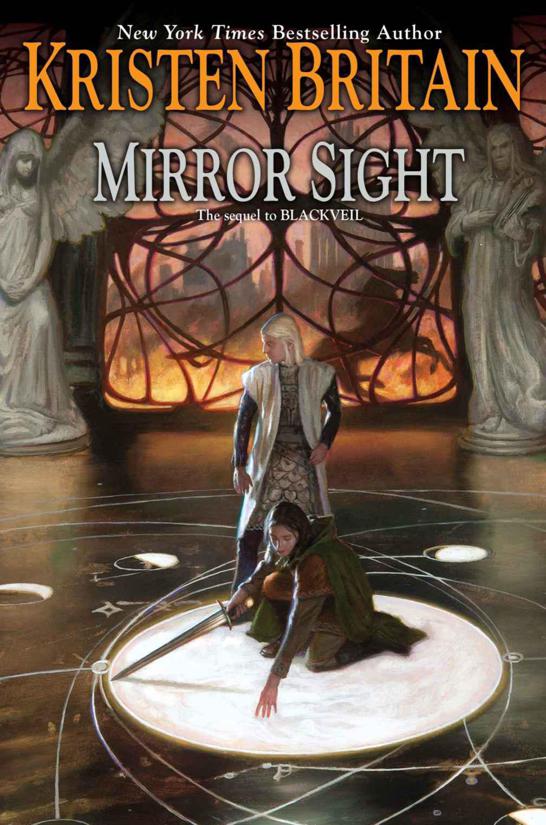 All characters in the book are fictitious.

The scanning, uploading and distribution of this book via the Internet or any other means without the permission of the publisher is illegal, and punishable by law. Please purchase only authorized electronic editions, and do not participate in or encourage the electronic piracy of copyrighted materials. Your support of the author’s rights is appreciated.

TWO OUT OF TIME

IN THE SHARD OF THE LOOKING MASK

THE TRAINING OF CADE HARLOWE

A CAT, THE GHOST, AND RAVEN

AN EXCHANGE OF SECRETS

THE WILL OF THE GODS

THE WITCH HAS SPOKEN

INTO THE BIG TOP

A WAR OF SECRETS

THE SECOND MESSAGE, AND THE THIRD

A MAP OF THE CAPITAL

THE BELLS OF MILL CITY

THE MEMORY OF HOOFBEATS

A MOTE OF SILVER IN HER EYE

THE SCENT OF HOPELESSNESS

THE PRISON OF FORGOTTEN DAYS

THE MANY FAILURES OF CADE

A DARKNESS IN HER MIND

THE BLADE OF THE SHADOW CAST

THE TALE IS TOLD

AUTHOR’S NOTE: On Inspiration and the Real Mill City

For my dear Schoodic Peninsula Writers East, who helped make this a better book (and kept me sane during its writing):

I love you guys!

S
he lay entombed in stone and dark. Light did not exist here, the blackness snuffing out whatever memory of sunshine and moonglow she carried within her, as surely as the thinning air stole her breath and suffocated her. She kicked and pummeled the close walls of her prison again and again, heedless of causing even more harm to injuries she had suffered in Blackveil.

But no one heard her. No one came to her rescue and opened her tomb. Spent by her efforts, she fell limp and lay gasping in the dark.

Karigan G’ladheon wondered what she had done to deserve such a death. The last she remembered was having been in Blackveil—Castle Argenthyne. She’d shattered the looking mask to prevent Mornhavon the Black from possessing it and then dreamed or imagined she’d fallen through the heavens. Perhaps it had been no dream. Otherwise, how had she ended up here, wherever
here
was?

She found no difference in the darkness when she closed her eyes. She was tired, her mind dulled from lack of air, and she wished to just keep her eyes closed and sleep, but then she remembered her moonstone and pulled it out of her pocket. Its light was a dim, sputtering orange as if the darkness of her tomb were too great, was killing it, too. It cast just enough light to confirm what she felt and sensed: she was trapped in a rectangular stone box like a sarcophagus. She was seized by a new wave of panic that sent tremors coursing through her body, but this time she was too weak to kick or scream.

Instead, she grew listless in the wan glow of the moonstone, caring little about hands bloodied from pounding on unyielding stone, or that the arrow shafts that splinted her broken wrist had shifted in their bindings. Shards of silver protruding from her flesh and glinting in the light, the remnants of the looking mask, elicited only faint interest.

Her bonewood cane, she observed, had also made the journey with her, and lay beside her reminding her of how warriors were often buried with their weapons.

As she lay weakening and starved for breath, none of it seemed to matter anymore. Her hand fell slack and the moonstone rolled off her fingers, extinguishing immediately. She faded, faded away into darkness . . .

Dirt showered Karigan’s face. It was a distant sensation. She hadn’t the energy to wipe it away.

Her nose tickled. A faint freshening of the air. Music seeped in, almost as if she were hearing it from under water. A graying of the dark, a crack forming around the lid of her tomb. The tip of a tool pried into the crack, widening it further.

“Help!” she cried, but it came out only as a harsh whisper. Someone must have heard her pounding, after all. She was going to be rescued. She would be free of this death box.

The tool nosed farther in, more light penetrating the dark, the brassy music growing louder. A second tool was shoved into the crack.

Karigan’s heart thudded, and she tried to push up on the lid, but she hadn’t the strength.

A thrum vibrated through the stone and rose in intensity until she realized it was drumming, a fast rolling rhythm.

The tools went back to work, the crack widening and widening until the lid teetered on one edge and then scraped over the side, thudding to the ground. Karigan wiped grit out of her eyes and took a deep breath, relieved at no longer having to strain to fill her lungs. The drums silenced and an expectant hush suffused the air. A pair of shadowed faces peered into her tomb, then jerked away as if startled.

Guess they weren’t expecting me.

Another deep inhalation took in a mixture of scents—soil, horses, sweat, smoke, cooked foods . . . She sat up, head spinning, and was blinded by light that beamed into her face. She heard a collective gasp from a large crowd of people surrounding her, but at a distance. She groped after her moonstone, and with the aid of the bonewood cane, she stood. Screams and murmurs greeted her rising.

Definitely not expecting me.

She squinted against the light, held her hand up to shade her eyes, but discerned little, only that she seemed to be in the middle of a sort of arena, with many people seated around its circumference.

“Behold the marvels of the underworld!” a man’s voice boomed. “The dead walk again!” The announcement was followed by stuttered applause, which grew into thunderous approval.

Where am I?
Karigan wondered again.

The brassy music started up once more and the light swept away revealing men in white face and motley, tumbling, juggling and battling one another with wobbly swords. One rose up from the ground, arms stretched out before him, walking as if asleep or aroused from the dead. Mimicking her? Their antics were met with clapping and laughter by the audience.

Clowns? A circus?
Karigan was trying to put together the notion of a circus with her tomblike entrapment—and when she glanced behind herself she saw it was indeed a sarcophagus with a weathered crescent moon and some script on its side—into some coherent form, when both of her arms were grabbed by a pair of strong clowns with snarling demon visages on their faces. Maybe she was actually dead and this was one of the five hells.

The clowns hauled her across the arena and through a curtain into the back. She cried out in pain as they pushed and shoved her, jarring her injuries. She grayed out, and they dragged her. She barely perceived gaudy performers warming up, a prancing white horse, rigging, platforms, and balance beams cluttering the space.

The clowns threw her into an alcove formed by trunks and crates. Before she could get her bearings and sit up, a third man thrust his way between the clowns and glared at her. He pointed a riding crop in her face. “Who are you?” he demanded. “Who put you up to this?”

He was a small, round man in dark business attire, though in a cut she had not seen before, and his hair carefully trimmed. His cheeks and nose flushed pink.

Karigan rose to her elbow. “Where am—?”

The crop snapped down at her. She raised her arm just in time to avoid being struck across her face. It was her broken wrist that caught the blow. The splint mostly protected her, but pain burned up her forearm and she cried out.

“I ask the questions. Was it Josston who put you up to this? Hmm? He is ever wanting to ruin me, embarrass me.”

“Dunno, boss,” one of the clowns said. “Crowd liked it. Walking dead and all.”

“Thanks to the ringmaster’s quick thinking,” the man growled. He turned his anger back on Karigan. “What did you do with the goodies inside—keep ’em for yourself, eh?”

Goodies?
What was he talking about? With a great deal of effort, she rose to her feet. The man raised the crop again.

“You should not assault a king’s messen—”

This time when the crop descended, she broke the blow with the bonewood.

“Try that again and you shall be sorry,” Karigan said, hoping it would be enough.

“Insolence! I will not have it!”

She pressed the trigger embedded in the shaft of the bonewood and extended it from cane length to staff length with a shake. When the crop lashed at her again, she thrust the butt of her staff into the man’s belly. The wind
oofed
out of him and he crumpled away. The clowns caught his arms before he hit the ground. Karigan took her chance and shoved by them, looking for the nearest way out.

In her condition, she’d never outrun the man’s henchmen. Henchclowns? She kicked over a bucket of soapy water behind her and pulled down a tower of empty packing crates. The soapy water merely soaked into the dirt and sawdust floor, but the crates impeded them. She rushed for an opening in the tent as fast as her limping gait allowed, dashing past a bear attached to a chain, and a contortionist bent over backward, watching Karigan from between her knees.

Karigan shook her muddled head and escaped into the dark of night.