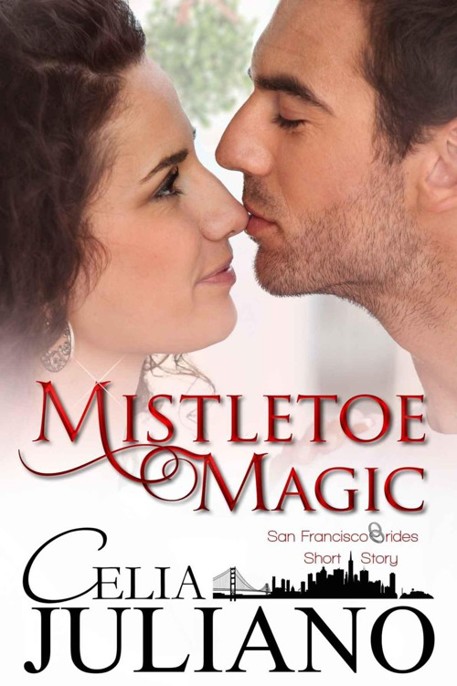 This book is a work of fiction. Any references to historical events, real people, or real locales are used fictitiously. Other names, characters, places, incidents, and scenarios are products of the author’s imagination. Any resemblance to actual persons, places, or events is coincidental.

All rights reserved. No part of this work may be reproduced in any format without the author’s consent.

Pete DeGrazia is the family nice guy. But this Christmas he’s speaking out, taking charge, and kissing the girl under the mistletoe. Becca Polito is the girl and she’s seeing family friend Pete in a new light. Will their kisses under the mistletoe bring the magic of love?

Many thanks to my family and friends, as always.
And to you—may you find Christmas cheer all the year, and love in every season.

At the end of this book is an excerpt of book one in the San Francisco Brides series,
Always
. I hope you enjoy.

“Nice guys like you, Pete, just don’t get it.” Pete’s ex-fiancée, Kerry, shook her blonde head. Her tightly-done hair and features didn’t move.

“Thanks for returning the ring. Congrats.” Pete smiled as Kerry’s lips twisted. She didn’t get that he was over her and he was happy she’d found someone else. Pete studied the papers on his desk again.

Kerry pushed out a frustrated breath. Her heels clicked across the concrete floor of his office. The door slammed shut.

It’d been over six months since he and Kerry’d broken up. Thank God. He’d seen what he wanted to in Kerry. She’d seen his family’s money, not him. When she did, she’d found him lacking. Pete wanted to see good in people, but they didn’t return the favor as often as he’d like.

Pete shoved the papers and stood, stretching. His fingers almost touched the ceiling. His phone buzzed on the desk. Aunt Sophia. He answered.

They exchanged hellos. “Can we count on you for Sunday dinner tomorrow?” Aunt Sophia said.

“Sure.” He wanted to ask if Becca would be there. He wanted to tell Aunt Sophia to stop trying to set his cousin Joey up with Becca. But Pete didn’t do things like that. He let things go. Even with Kerry, she’d been the one to push him to get engaged.

Besides, Becca hadn’t ever looked at Pete with anything other than friendliness. And she was friendly with everyone.

“Good,” Aunt Sophia said, breaking into his thoughts. “See you at five.”

“Okay.” Pete ended the call. He shrugged his shoulders. Christmas cheer would be all over Aunt Sophia’s like bug splat on a windshield. He should just take off, like his brother Gianni and his cousin Janetta did, to avoid the family storm.

But he was the reliable one, always there. He used to like it, the family gatherings, especially at Christmas, when everyone smiled and sang and baked and forgot troubles—the magic of the season. But the magic had gone stale, old. He felt old, at thirty. He wanted to find a special woman, get married,
have
kids. Discover the magic again. Yet instead of it happening for him, his cousins Vincente and Lorenzo, who hadn’t even been trying, found that magic. He blew out a breath and chuckled at his sulky attitude. He was glad for them. But for him…Maybe Kerry was right, maybe he wouldn’t ever get it.

“Hi, Becca,” Carlo D’Angelo said as he walked down the steps of his and Sophia’s house. “Go on in. Sophia’s in the kitchen. I’m going to check on my mom. See you soon.”

Carlo patted her arm as he passed. Becca smiled and nodded. She walked up and into the house, as she had been since she was a little girl. It was a blessing, having neighbors like the D’Angelos.

The house was warm and smelled like sugar, yeast, and spices. Holiday baking was in earnest, since it was already a week into December. Sophia had gone all out on the decorations, too, even more than usual. Greenery swagged the staircase, with red ribbon and bows
throughout,
bows decked the family photos lining the walls of the hall. Becca peeked into the living room—a cozy Christmas throw brightened the green sofa, holiday candy stood in a bowl on the coffee table, candles and greenery and ribbon near it, and on the fireplace mantel. A large Italian nativity set filled the table behind the sofa. And the tree: a floor to ceiling noble fir stood in front of the bay window, ornaments and bows and lights laced throughout the branches.

Becca drew in a breath, the scents calming her. She walked to the kitchen.
Sophia, a holly-patterned apron on, kneaded bread dough at the center island.

“Becca!”
A smile beamed from her older friend’s face. Sophia and Carlo’s had been the welcoming house in high school, and, for Becca, a haven from elementary school on. Still, since high school, it had lost some of its appeal, since Sophia had consistently tried to set Becca up with her only son, Joey. At first, Becca had been interested, but Joey wasn’t, and Becca soon realized that was a good thing, because they weren’t compatible. They’d gone out on a couple of dates over the years, mostly to satisfy Sophia, and they’d been bored with each other, not enough to talk about, even though they got along fine in the crowds of family gatherings.

“I’m so glad you’re here early.” Sophia plopped the dough into a big white bowl and covered it with a flour sack towel. Then she wiped her hands on a red dishcloth and hugged Becca.

“Thanks for inviting me. Can I do anything to help?”

“Sure, thanks. Would you like me to get it?”

“You’re a dear.” Sophia sighed into one of the oak chairs at the large oval table in the corner. The mellow winter afternoon light played through the red check curtains. They were usually blue, but Sophia changed them for the holidays.

Becca put on the kettle, got down two Santa mugs, and placed tea bags in both.

“Have you heard from your grandparents? Are they enjoying their trip?”

“They arrived safely. I think they’re a little surprised by some of the changes, but they’re happy to be there after so many years.”

“It was good of your dad to send them.”

“He’s tried for years, but Grandpa never wanted to leave the store. Now he’s eighty, he finally decided a trip home to Italy would be worthwhile. And he has my cousin Dave trained now.”

“I wish you’d stay here with us. I hate thinking of you all alone in the house.”

“I’m okay.” She wasn’t, really. No Christmas decorations up. No family around. Supposedly, she lived with her grandparents to help them, but now she realized they helped her.

“I guess it might be awkward, since Joey’s here.”

“How’s the remodel going?” Joey was moving into his cousin Lorenzo’s old apartment but his uncle, Sophia’s brother, who owned the building, was remodeling.

“Good, should be done by February. I’m sure Grandpop would love to have you at his house.”

Grandpop was Sophia’s uncle, but everyone, including all the younger family friends, called him “Grandpop.” He, like Sophia’s father, lived in a fabulous mansion up the hill with his grandson, Vincente, and his new wife, Gina.

Becca poured water in the mugs, the tea bags puffing briefly. That’s how Becca’d felt so much of her life, puffed and scalded. She’d felt that earlier, and that was one reason she was here—it got her out of herself, helping someone she loved. She put a bit of sugar and milk into the tea and brought both cups to the table.

“Thanks,” Sophia said. She blew on the surface of the tea.

“Thank you for inviting me.” Becca slid into the chair next to Sophia’s. She wrapped her hands around the mug, letting the warmth ease her thoughts away.

“It’s fun, having a Christmas Eve birthday. But I’m sure that baby will get all the attention and love in the world whenever he’s born.”

“Maybe she.”
Sophia
smiled,
a tender look crinkled her eyes.

“They haven’t told anyone the sex?”

“Lita didn’t want to know. So they’re getting surprised—what a Christmas gift.”

Becca nodded and sipped her tea. It was a gift Becca hoped would happen for her soon. Though without a husband, it wouldn’t happen for her at all. But she had her family, and her students, and they were all wonderful…mostly. She smiled.

“I’m glad to see you looking happy. So, whatever happened with that banker you were seeing?”

Becca’s smile twisted into a grimace. “He wasn’t for me.”

Sophia patted her arm. “I don’t know what’s wrong with these young men.”

Becca shrugged. Maybe it wasn’t them…
No,
it was just that she hadn’t met the right man yet. She used to think it was her, and her ex-fiancé had agreed, telling her she was too fat, her hair too curly, she was too nice, too sweet. She gripped her mug. One thing Becca could say for her sister Shaina, she’d helped her see how wrong that all was. Shaina’d breezed in on one of her visits, sized up the relationship, and had a long talk with Becca. After that, Becca gathered the courage to break up with her fiancé. And she’d never regretted it. But it was lonely sometimes, especially with all the holiday parties coming up.

“You know, Becca, maybe you and Joey should…”

Becca laughed and set down her cup. “Sophia, I appreciate what you’re trying to do, but I know we’ve both told you it just won’t ever happen.”

“If you believe.”
Becca laughed again. It was an old saying in the D’Angelo-DeGrazia clan. And they’d seen their share of miracles. Becca believed, but it hadn’t been her time yet, not for that miracle. She gulped some tea. “So, what are we baking?”

Sophia shook her head with a smile. Sophia wouldn’t be deterred that easily, but she’d taken the hint.
“Rolls.
And some biscotti for dessert.
Doughs are made, but I’d love your help shaping the rolls. You make such pretty twists.”

“Grandma taught me.” Grandma’d taught her a lot, not just domestic skills, but about life, and love. Becca’s parents hadn’t had much time for those lessons.

“She’s a great lady. I was blessed to be raised with so many wonderful women. And I’m blessed still.” Sophia’s smile included Becca.

Becca crossed her legs. Last time she’d seen Pete, he’d looked at her…strangely. He was a quiet guy, with kind eyes, but that evening, he’d stared at her with something different in his expression, something more than his usual friendly glances.

“That’s like a regular night.” Becca stood and took the mugs to the sink.

“True. There’ll be plenty of us at the party at my dad’s next weekend.
And for Christmas.”
Sophia joined Becca at the island. “Let’s bake.”

Sophia scooped some biscotti dough and Becca followed suit. She shaped it into a loaf. Biscotti were Pete’s favorite. Her stomach tingled. Becca patted the cookie dough. She didn’t feel anything special for Pete. It was Christmas.
A time for warm fuzzy feelings, excitement, joy.
Nothing to do with Pete.