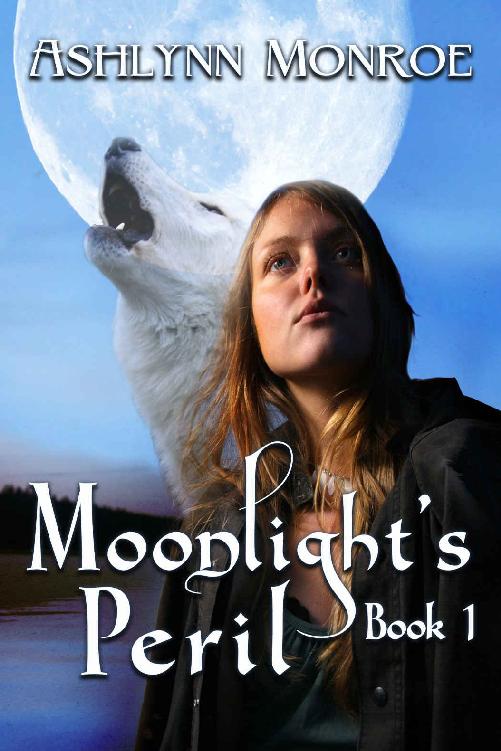 Book One of the Moonlight Series

No part of this book may be used or reproduced without written permission, except in the case of brief quotations in articles and reviews. This book is a work of fiction and any resemblance to persons, living or dead, or places, events or locales is purely coincidental. The characters are productions of the author’s imagination and used fictitiously.

Bianca Archer watched her thirteen-year-old daughter leave on a camping trip to reconnect with an absentee father. Bianca’s life stops when his body is found and her daughter is missing. She’s sure the local off-the-grid commune took her child.

Law Foster has a pack to protect. Helping nosy Bianca jeopardizes his duty. Bianca isn’t part of his world and that makes her a very dangerous woman to want. When she witnesses Law’s shift, he has to make a choice—bite her or trust her.

WARNING: This book is not suitable for children and should only be purchased and read by adults.
Moonlight’s Peril
contains explicit sexual content, violence, and profanity. If any of those things offend you, please stop reading here. The love scenes are graphic and use frank language.

**Trigger warning** If you have endured kidnapping or have a missing child parts of this book might be uncomfortable for you.

**Trigger warning** If you have suffered domestic abuse, parts of this book might be uncomfortable for you.

For my mother, thank you for everything. For my daughter, I love you. Thank you to all my friends who have helped me with this book. Special shout outs to Jessica, Lacey, Kyla, Amanda, Linda, and Cari. Mark M. you are the most fantastic catcher of fumbles in the history of critique groups! You and Linda both make my heart happy, and I value the blessing you are to my life. Your kindness is amazing. I appreciate you. I want to thank all my LAWG pals.*HUGS*

Holding her breath, Bianca Archer clicked on the flashlight. She crouched low, doing her best to keep the glow hidden. Opening the well-creased map, she smoothed the paper. Desperation trumped common sense where Chessa, her missing teenage daughter, was concerned. She pointed the beam down at the notes and marks to study the places she’d personally searched. There wasn’t much left except the inside of the compound.

The wind whistled, blowing hard outside. Rubbing her chilly arms, Bianca glared, through her windshield, at the entrance to the compound. Her eyes followed the massive wall that kept her from searching. Law Foster—even his name seemed weird—and his band of off-the-grid types knew something about what happened to Ches. Her maternal instinct demanding she scale the fence and find her child, but rational thought kept her seated.

No traffic traveled down the gravel path this late at night. Leaves blew wildly in the trees as the wind danced through them. The air held the crisp tang of fall and somewhere an owl sat hooting. Bianca would have appreciated the sight of headlights right now to chase away her unease.

The full moon hung high in the sky and Bianca could see well for such a late hour. As usual, she couldn’t sleep. Watching the compound for any sign of her child was the only solace she found. She hadn’t enjoyed uninterrupted sleep since Ches went missing because ghoulish nightmares took a toll on her. Every. Single. Night. Chessa should have started seventh grade today. Bianca avoided the stores and their colorful aisles of school supplies for so long that last night’s supper had been ketchup on saltines.

Yawning, she shook her head, fighting to stay awake. She closed her eyes, just to rest them a second.

Bianca caught a glimpse of Chessa’s long, dark blonde hair as she ran around a tree.

Where were they? She looked down. Why was she wearing her Coach heels for hiking? She took another step and her foot caught in a rotted log. A terrified scream ripped through the stillness of the night. She yanked with all her strength, but her foot remained trapped. Another scream echoed and when she looked up the moon wasn’t yellow anymore; the celestial orb was blood red. Now she stood in a field. Lucas’s body lay at her feet, torn and broken. His blood covered the ground. A frozen expression of horror remained on his face, just like when she’d identified his body at the morgue.

A loud pounding on her window made Bianca jerk. Her short, unrestrained shriek burst out as she struggled for consciousness. Car. Road. She looked around until she understood what woke her.

Both men standing next to her vehicle had wide stances. With the moon shining bright, Bianca could see the matching scowls they wore. Foster and his number one minion, Nik Martin, glared at her. For a second, she debated running or staying, but courage demanded she face her nemesis. She reached into her oversized bag for her small bottle of pepper spray and hid the weapon by her side for reassurance. Taking a deep calming breath, she started the engine in case she needed to make a quick getaway. Motorized noise from her window going down was the only sound. Even the crickets had quieted as if they were also afraid of Foster.

She gazed up at the duo as they glared back at her. Annoyance gave her the nerve to be the first to speak. “What’s your problem, Foster? I’m not on your land this time. I checked the deed with the city and this road isn’t yours.”

Bianca tried to ignore how his rugged features made him even more handsome as the moonlight played over his face. Foster cleared his throat and his full lips twisted into a frown. His dark blond hair was just a little too long. The tall male-model-beautiful man made her a little breathless. He glared at her with his icy gray gaze.
Too bad he’s a psycho.

Foster crossed his arms over his chest and the furrow in his forehead deepened. “Bianca, we don’t have your daughter. You know we don’t. You’re upsetting my family with this stalking routine. You shouldn’t be here every night.”

“You can’t stop me.” Bianca glared. “I know you, or one of your
family
members has her or knows something about what happened to her. Lucas didn’t mean to trespass on your land. I’m sure he didn’t. Please, just give her back to me.” Bianca realized how desperate her pleading sounded. Emotion rushed through her, shutting off common sense. “Please, I’ll do anything. I’ll never tell the police. We’ll just say she ran away because she was scared. Please, I can’t live without her.” Foster’s hard expression never cracked. Bianca’s heart sank. “Please.”

“We don’t have your kid.” Nik’s menacing tone sounded almost like a growl.
But that’s just silly.
He reached inside her car window and grabbed her shoulder.

Instinct took over. In a single motion, Bianca swung her arm forward and sprayed Nik right in his eyes. He reared back, letting go. His agonized howl sounded more animal than human.

Bianca slammed the car into reverse, backed up, and slammed the car into drive before flooring the gas pedal. Her aging BMW fishtailed, kicking up the gravel with violence to match her erratic emotions. She sobbed herself into a blinding torrent of misery, but she didn’t dare stop, or Foster and his pals would make her disappear too. She had to find her daughter, which meant she couldn’t let them kill her. She was the only one who believed Chessa remained on that property, alive.

“You should’ve kept your hands to yourself,” Law said without any hint of sympathy. He watched his friend struggling. Law’s jaw ticked as he clenched his teeth. The fear on her face, when Nik grabbed her, had twisted his gut. “The lady has a big set of balls. She’s not easy to intimidate. If she were, she’d have stayed away by now.”

Nik grunted and moaned as the change began. His body twisted and the popping-tearing sounds of his limbs and torso morphing into his primal form made Law look up into the sky. Two nights until the full moon. An injury like the pepper spray would set any wolf into a transformation this close to the sacred night. Nik managed to hold the wolf back until Bianca Archer was gone. Her blue eyes always saw too much. There was something about her that Law couldn’t fully explain, and that bit of mystery made her dangerous. The moonlight had sparkled in her hair making the strands look like silver. And just like real silver, everything about her was just as dangerous to him. Humans weren’t good for his kind. He’d never been into fancy blondes, but that woman made him hard as hell. She smelled better than most human women too. Her curves were a turn on.
What the fuck is wrong with me? The last thing I need in my life is a human.

Nik howled again; his body caught between beast and man. “We have to stop her,” his deep voice rumbled with a demonic cadence brought about by the transformation.

“I. Won’t. Kill. Her.” Law’s firm certainty punctuated the statement.

“Unless you’re willing to start a war with Tobias there’s nothing we can do to help,” Nik growled. “She’s good as dead.”

“But not by my hand, or yours. We aren’t like Tobias’s pack. We’re human.”

Nik gasped as his expression twisted with agony. His ears and snout began shrinking, so he started to look more human. “We’re wolves.”

“Yeah, we are, but we’re also men. People will miss her.” Law ran his hand through his hair. He gave the beta wolf of his pack a piercing look. “I won’t have a war, but I don’t agree with the murder of that woman. We don’t kill.”

“We do to protect the pack,” Nik said. “That’s been the rule since the beginning of time. Even your dad would’ve killed a woman threating the pack. Why don’t we just lead her to Tobias and wash our hands of her?”

“There’s something about her—I don’t want her killed. Let me handle her.”

“Like you’ve handled her so far?” Nik smirked. “What is it with you and that woman? You’re not thinking clearly.”

I wish I knew. Maybe I just need to get laid.
“You want to challenge me for alpha?” Law’s voice rose.

Nik flinched. “Hell no, but I don’t want you to put yourself in a position where some else will.” He scratched behind his ear with a metamorphosed hand. “You know Kort would love to take the pack from you.” His face was starting to look a little more human. “She’s making our people nervous. There are men with mates and families who resent you for sparing Bianca. You’re a good leader, but that doesn’t mean you don’t make some bad decisions once in a while. Letting that woman live isn’t the right thing for our blood.”

Law’s exceptional wolf’s eyesight could still see her taillights over a mile down the road.