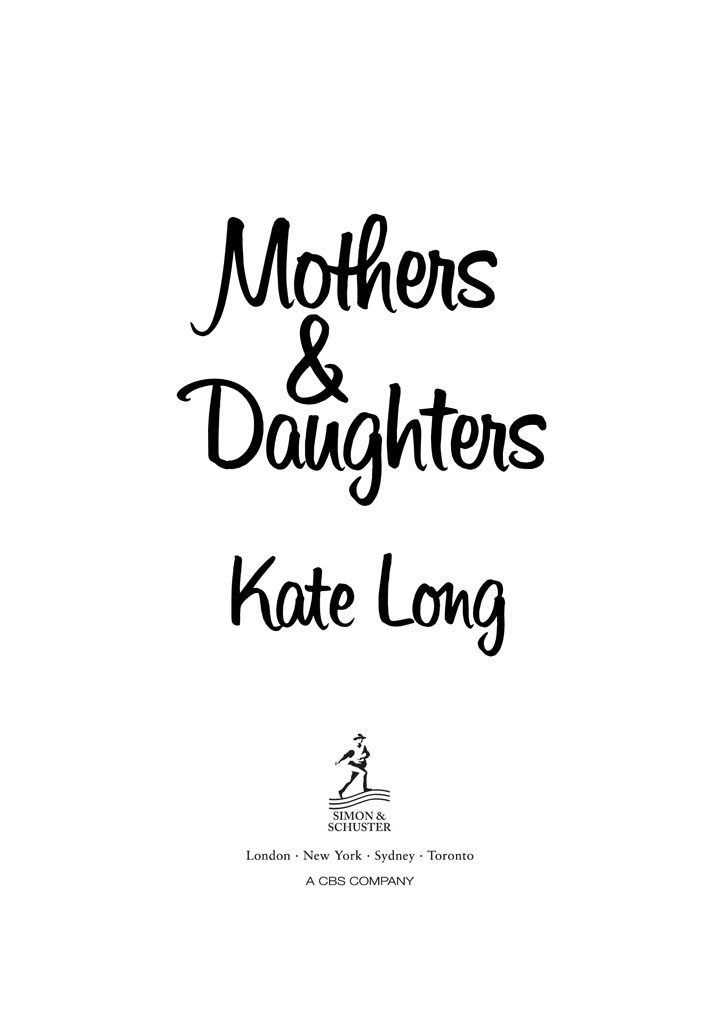 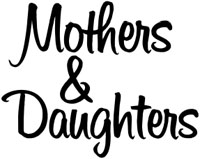 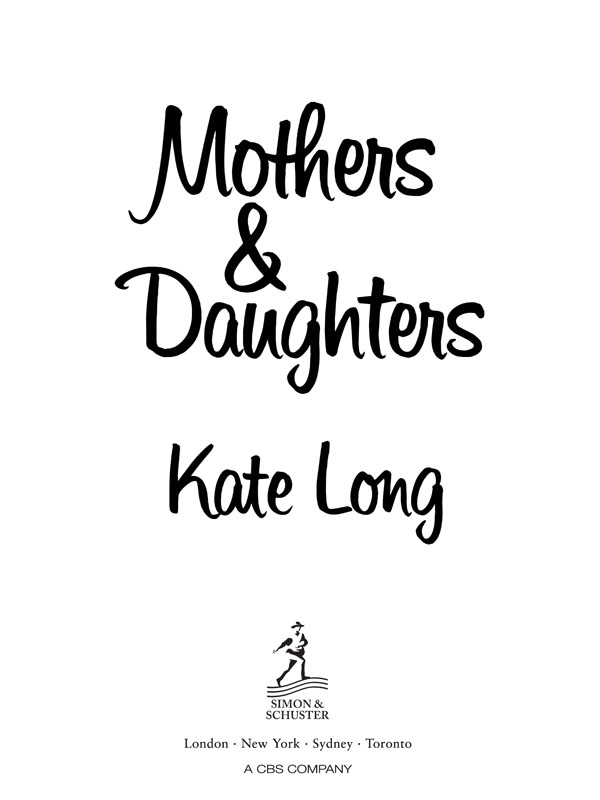 The right of Kate Long to be identified as author of this work
has been asserted by her in accordance with sections 77 and 78
of the Copyright, Designs and Patents Act, 1988.

This book is a work of fiction. Names, characters, places
and incidents are either a product of the author's imagination or are
used fictitiously. Any resemblance to actual people, living or dead,
events or locales, is entirely coincidental.

Printed in the UK by CPI Mackays, Chatham ME5 8TD

Also, thanks as ever to the WW girls for their excellent feedback, to Suzanne Baboneau, and to Peter Straus.

Location: the back garden at Pincroft, Bolton

Subject: The rear of the house, flat and rendered, looks over a straight-sided lawn bordered by bare black earth. Can a garden look packed-away? This one does. The beds remain unfilled, and will stay that way till spring. Round the front, though, it's a whole different story: Carol's mother Frieda has planted blocks of purple and white pansies, there is an Alpine rockery and even a little sundial. But the front of the 1930s semi boasts a gable with a tile pattern, and a bay window, and a proper porch, and is on view to passers-by. This is 1963. Appearances matter
.

At the top edge of the picture is Carol White, aged eight. She is raking up fallen beech leaves, as a punishment. She has on her black wellies, brown crimplene trews, a yellow jumper, and a face like thunder
.

Asked, the day before, to go round and pick snails off the hedge, Carol instead attempted a rescue. She should have drowned the snails in her bucket, but when it came to turning on the outside tap, she couldn't bring herself to do it. They
were, when she examined them, unexpectedly beautiful, the radiating flecks on their shells reminding her of the patterns in her own irises. Then there were the little jelly feelers, so friendly and sad. Nothing else to do but line an Oxo tin with leaves, and tumble the snails on top, with the lid open a crack for air
.

For such slow creatures, snails (it turns out) can cover a lot of ground in six hours. The square of bedroom carpet has had to be scrubbed, the wallpaper wiped down and the candlewick bedspread put on a hot wash. There it hangs at the opposite edge of the picture, a soggy curtain in tufted salmon
.

âWhat did you think you were doing?' cries Frieda, her voice shrill with martyrdom. âAs if I haven't enough on, trying to keep this place decent.'

No good trying to explain. In her mother's book, cleanliness will always trump invertebrate welfare. If it wasn't for Dad, Carol thinks, she'd pack her satchel and go live in the forest like the Babes in the Wood
.

Sometimes I think I had a premonition. That the moment I picked up the phone, I had this sense something was wrong. But more likely, it being a Wednesday evening, I'd have been rushing round trying to get washed up and cleared away before going to the gym, and not thinking about anything other than where I'd put my water bottle and whether it was too late to walk â in which case I needed to shift the wheelie-bin and get the car out of the garage.

I do remember I couldn't tell who was speaking at first, because Jaz was in such a state. Then I managed to make out âMum', and that's when I started to get frightened. I said, âJaz, love, what's the matter?' She just cried harder. I said, âJaz, are you all right?' which was a daft question because of course she
wasn't all right, she was absolutely beside herself, incoherent. And she's normally so cool, so laid-back; that or in a temper about something. Not tears, though, she's never been one for tears.

So I said, âWhat's happened? Whatever's the matter?'

She said, âHe told me, Mum, he told me straight out.' Which I couldn't make sense of. All I knew was that something was dreadfully wrong.

It's amazing how you can go from calm to terrified in a few seconds, like revving up a car. I made myself ask, âIs it Matty?' Because that was the very worst scenario I could imagine; the call every grandparent dreads. I remember looking down at my hand where it was holding the edge of the chair and the knuckles were white, and at the back of my mind I was making all these mad bargains with heaven and fate â anything.

My legs nearly gave out with relief. Thank You, God, thank You, God, I was saying in my head. At least if Matty was all right, if my Matty was safe and sound, I could cope with whatever was coming.

They say families follow certain patterns. Like, if you're knocked about as a kid, you might end up marrying someone who knocks you about, and if your mother's a cold fish, you're going to find it hard to bond with your own children. I'd have said that was phooey: thinking of my own mum Frieda, and how she was with me, and how I've been with Jaz, there's no comparison. But then, you don't know what children take in when they're young. You can run yourself ragged for them, and
they'll still seize on the one thing you did wrong. Which in my case was to marry a cheat.

Which, it turned out, was what Jaz had done.

Normally it takes me fifteen minutes to get to the other side of Nantwich: I did it in eight. I don't know what I was expecting when I pulled up outside the house. Smashed windows, a pile of Ian's belongings on the front steps, maybe. Instead, everything looked normal: planters full of dead lobelia, plastic cart of Matty's in the middle of the drive, gate off its hinges. One day, I thought, Ian might actually get round to fixing the place up. Or not.

Jaz had left the door on the latch for me, so I went straight in. There's always a lot of clutter in Jaz and Ian's hall and it's narrow to begin with, so I had to go carefully, stepping over shoes and squeezing round the pushbikes and pausing to pick up clothes I'd dislodged from the radiator. Piles of stuff on the stairs, as usual; it would drive me round the bend if I lived here. I don't ever criticise, though. That would be asking for trouble.

As soon as I called her name she appeared in the kitchen doorway.

She's always been a beautiful girl. I've tried never to make a big deal of it, but other people would comment, especially when she was little. âChild model,' Mrs Wynne next door used to say. âYou should send her photo off.' Even when she started with her piercings and her long clothes, my daughter still turned heads.

Now, though, standing in front of me in this gloomy hall, she just looked a mess. Her eyes were red and swollen, marked with tracks of mascara, and her long, thick hair was all over the place. The baggy black jumper made her seem much younger than her twenty-seven years.

I moved forward to give her a hug, but she started to talk in a way that kept me back.

âComplete fucking
bastard
,' she said. âI can't believe what he's done. Just goes, “Yeah, I've slept with someone”. Like it was nothing. Like it was
fucking nothing
.'

Even though there was no questioning her distress, I had some trouble taking in the image. Ian â casually announcing his infidelity? Surely not. One of us must have it wrong.

âAre you saying â he's admitted he's having an affair?'

âOf course he's
fucking
admitted it! That's what I've been
telling you
!' She struck the doorframe with the flat of her hand, and I saw tears drop off her chin.

So that was it. There didn't seem to be any doubt. Ian, the boy everyone liked: shyly spoken, posh, gawky. Decent, we'd thought. Straightforward. Good for Jaz. That big wedding four years ago, all for nothing. Marquee, open-topped car, special bamboo holders for the flowers. Dress that she wanted altering right at the last minute. I still had the pillars off the cake sitting on my kitchen shelf.

Jaz looked at me as though I was mad. âHe's up-fucking-
stairs
. In his cot. Where did you think he was? On the
fucking moon
?'

I didn't dare ask if he was OK in case she took it the wrong way, but suddenly I was desperate to see. âI thought I heard him calling,' I fibbed, and scooted back down the hall.

By the time I got to the top of the stairs, my blood was pounding. Matty's door was a few inches ajar and the night light showing. With extreme care I pushed the door open
further, wincing at the shush-scrape of the carpet, and stuck my head round.

Music of Ghosts by Sallie Bissell
Where Monsters Dwell by Brekke, Jørgen
The County of Birches by Judith Kalman
Flawless by Lara Chapman
The Edge of Nowhere by Elizabeth George
The Home: A Zombie Survival Short Story by Stoesen, Chris
Nobody's Fool by Richard Russo
Distant Dreams by Judith Pella, Tracie Peterson
Faces of Fear by Saul, John
Stuff Christians Like by Jonathan Acuff
Our partner