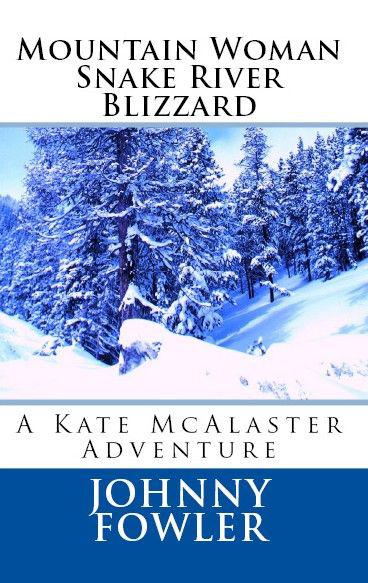 The torture and murder of a mine executive sends the US Marshals on the trail of the killers, who have also kidnapped a widow woman. The chase leads them to the Snake River where Kate and Man must also face the worst blizzard in Idaho history. In order to catch the killers, they must survive frigid temperatures, ten-foot snowdrifts, and avalanches. In the fourth book in the Kate McAlaster Adventures, Kate faces her greatest challenge when Man is gravely wounded and she must confront the outlaws on her own and find a way to keep the man she loves alive in the midst of a blizzard.

Johnny Fowler grew up on a cattle ranch in west Texas and worked on a sixty-thousand-acre ranch throughout high school and college. He graduated from Texas Tech University with a degree in business administration and began ranching for himself while employed by the USDA. While with the USDA, he wrote newsletters for producers, and articles for agriculture publications and newspapers. He has now converted the knowledge gained from his experiences and education into writing novels.

All right reserved.  No part of this book may be used or reproduced in any form or by any means without written permission from the author, except in the case of brief quotations embodied in critical articles or reviews.

This novel is a work of fiction.  All of the events, characters, names and locales depicted in this novel are entirely fictitious, or are used fictitiously, though reference may be made to actual historical events or existing locations.

Other Books by Johnny Fowler

Eclipse of the Heart

Murder in the Loop

The trip to Texas to bring back the Bright women to stand trial for fourteen murders in Spokane h
ad been tiring
,
to say the least
, on Deputy Marshal
Kate McAlaster Manchester and her husband
,
US Marshal
Homer
Manchester
.

Chief Federal Marshal
Joseph Meek wired
the marshals
to take a month vacation
.  They had been on the trail of outlaws
that had taken them from Idaho to Texas,
and
they
deserved the time off
to recover from the
ordeal
.

Kate had only been in her
new home
a few nights before
they were sent to
Texas after
the Bright
women
.

It was almost dark when they put their horses
,
Red Bird and Arabian
,
in the barn and tossed them hay and put oats
in the trough.
Their two pack mules where turned lo
o
se in the corral and given feed.  Kate and Man carried their pack
s
into the house and Kate hurried to the kitchen t
o start a fire in the fireplace she loved.  It was long enough to accommodate several cooking pots and pans as well as heat their home.

Man went outside and brought in wood
to replenish the stack she kept at the end of the hearth.
The
ir first
meal came from their
supplies,
as they hadn’t taken time to purchase anything to eat on their rush to get home to Coeur d’Alene
from Spokane
.

Following
a filling meal, the couple went to the bedroom for a comfortable night’s sleep in a
soft
bed.  For over two
weeks,
they had slept on the floor of a
bouncing
boxcar as they returned from Texas.

The morning light coming through the window woke Kate and she went to
the kitchen to
make coffee and cook breakfast.  A few minutes later, she heard Man on the porch drawing water from their well.  She peeked and saw him shaving and humming an old tune.

Her eyes feasted on her
handsome
husband and she recalled the
first time she saw his
fac
e
after she
’d
shaved his shaggy beard
.
He’
d been on the trail for several days and
survived an ambush
by outlaws wanting his winter supplies.  Kate
had
nursed him back to health in a small cabin high in the mountains.
They were never sure which state their cabin was located in, not that it mattered.  There were miles and miles of uninhabited land in every direction.

Kate McAlaster
had
survived an Indian massacre on the Oregon Trail and took refuge in his cabin.  It was fortunate
for both of them.  She would have died without food and
a place to spend the winter.
He would have died on the trail where she
’d
found him severely wounded
.

Kate offered a sigh of contentment and went back to cooking their breakfast.  When they finished, she leaned back and sipped a cup of hot coffee.

“Mr. Manchester,” she said.  “Do you remember when we first met, after you were able,
and
we worked our tail o
ff getting ready for the winter?”

“Of course I remember that.  Y
ou were almost a slave driver.”

“Well,” she said.  “W
e n
eed to do the same now.  There’s hay to be harvested
for the animals.  A supply of firewood must be cut and stacked before snow is so deep we can’t.”

Man offered a playful, teasing groan, but then said, “I’ll do
the firewood if you’ll cut the hay.  Leave it in piles and we can use the wagon to bring it to the barn.”

“A deal,” she said.  She went to change into her old
buck
skins for the outside work.  They both wore deerskin clothing when working on a case.  An Indian woman at The Fort made for them.  The wife of a friend of theirs made the original
clothing from soft deerskin
.
Unfortunately, s
he was later killed by slave traders capturing young Indian women for sale on the coast.

Man watched Kate
putting on the old stained skins and notic
ed she had put his on the bed.

“They are old and worn,
” she said,
“
but
good enough to wear while you’re chopping
wood.”

He didn
’t complain and dutifully pulled them on.  They went to the
barn where she got the scythe.  H
e picked up an ax
and his rifle
,
and they went to the meadow they
’d
bought with the house.

Man spotted a dead tree and went to work.  Kate selected an area with tall grass and began to cut it.
Swing
ing
a scythe was easy for her since she
’d
learned as a child back in Iowa.
With four animals to feed for the
winter,
she knew they needed a large supply.
The snow would cover the grass so deep the horses and mules couldn’t graze.

Man was busy cutting the branches from the log when he looked up and saw two young men
riding an old mule
toward him
.
He walked to where he
’d
put his Winchester rifle.  He and Kate never went anywhere without their weapons.

The two lads
st
opped on the road and walked
to where Man waited.

“My name is Roy
Shobert
and
this is my brother
,
Dan
,” the older of the two said.
“
We’re looking for work and are good at swinging an ax
or cutting hay
.”

Man looked over the young men.  He gauged the older to be about eighteen, the younger about sixteen.  They both had shaggy light brown hair
and had
obvious
ly never
seen the inside of a barbershop.
Man took a moment to size them up and decided they were decent kids looking for work.  He knew honest eyes when he saw them.

“We’ll give you a full day of hard labo
r for a dollar each,
”
Roy said.

Man tossed him the ax.  “I’ll
go to the barn for another.  Dan
, bring your mule and put him in the corral.  You can bring back another ax.
”

“Roy
, cut the trees in this fenced area
,” Man said as he gestured toward the old fence
.
“
Choose dead trees to start with.  They need to be thinned out so new ones can grow to take their place.
It looks like a fire killed them a long time ago.  I want the logs spl
it and cut in fireplace lengths
.
”

Man and Dan
went to the barn and put the mule in with the others.  “He looks like he could use so
me groceries,” Man said.

“
Our two
mules
are larger and will whip him away from the t
r
ough.
Y
ou had better
bring him inside.
”

Dan
led the mule in
side
the barn and Man gestured toward a stall.
“
Put him in there and give him a full bucket of oats and hay.”

They watched the hungry mule eating the grain for a minute.  “It’s be
en ages since he had grain,” Dan
said.

Adduné - the Vampire's Game by Wendy Potocki
A Question of Pride by Reid, Michelle
Hot Pink by Adam Levin
Braveheart by Wallace, Randall
Breaking Point by John Macken
The School of Flirting by S. B. Sheeran
Almost an Angel by Katherine Greyle
Finding Dani (Once a Marine, Always a Marine Book 3) by David, Kori
Lullaby by Claire Seeber
The Invitation by Roxy Sloane
Our partner