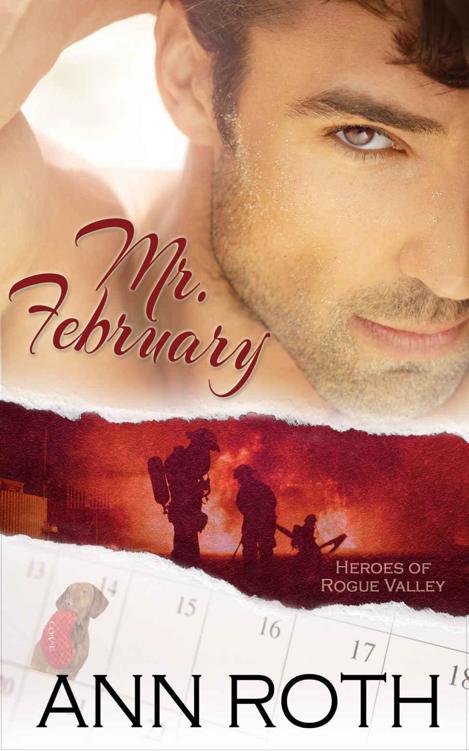 All characters in this book are fiction. Names, characters, places and incidents are either the product of the author’s imagination or are used fictitiously, and any resemblance to actual persons, living or dead, business establishments, events or locales is entirely coincidental.

With special thanks to John Burrow, Northshore Fire Department, and Greg Case, Ashland Fire & Rescue. Any errors or mistakes are mine.

Rafe Donato is a senior firefighter well aware that loving a woman can destroy a man. He will never trust any female with his heart. Jillian Metzger is a talented potter whose biological clock is ticking. Ready to fall in love, get married and start a family, Jillian wants what Rafe cannot give.

“C
ome back here, Pooh!” Jillian Metzger shouted as she sprinted across the uneven field adjacent to the cottage.

The border collie had the gall to bark joyfully and skip over rocks and tree roots at a clip Jillian couldn’t begin to keep up with.

To make matters worse, it started to rain. She hadn’t taken the time to grab an umbrella, let alone a jacket, had simply darted out of the studio in hot pursuit. Not wise, considering temperatures in early March in the Rogue Valley tended to be on the south side of chilly.

If and when she managed to catch Pooh, she was going to let her freeloading brother have it. Why couldn’t JR keep an eye on his own dog? Because he’d gone out with Chelsea, frittering his day away when he should looking for a job.

Pooh was a good fifty yards ahead now, and Jillian quickly losing steam. She was on the verge of collapsing in exhaustion when the dog skidded to a stop. Tail wagging, Pooh changed course, trotting toward a man and woman standing slightly uphill, under a big umbrella. What were they doing here in the boonies on a rainy Wednesday morning?

Jillian lurched to a halt to catch her breath and pull herself together before they noticed her. A futile effort, given how wet she was. Leaning against the trunk of a lofty tree heavy with leaf buds, she tucked her dripping hair behind her ears with icy fingers.

She couldn’t tear her gaze from them. What a striking couple. The dark-haired man, muscled and at least six feet tall, wore jeans, a light-blue sports shirt, and a black windbreaker that hugged his broad shoulders. His companion, with her shiny, stylish haircut and designer suit, stood close beside him under the umbrella.

Something about the guy seemed vaguely familiar, but before Jillian could place him, Pooh did the unthinkable—raced forward, jumped up, and planted her muddy paws on his powerful thigh.

“Get down, Pooh!” Jillian cried, pushing away from the trees and running again.

The big male didn’t seem all that upset. He patted the dog and then brushed the mud off his jeans, which were neatly pressed, as was his shirt. Clutching the umbrella in both hands, his horrified companion quickly stepped out of reach.

The second his dark gaze met Jillian’s, she recognized him. What red-blooded woman could forget those mesmerizing eyes, the strong jaw, and the slight hollows of his cheeks? She was about come face-to-face with Rafe Donato, aka Mr. February in the Guff’s Lake Fire Department calendar.

The calendar, part of the ongoing fund-raising drive for the department’s benefit fund, had been released right before Christmas and featured twelve of the most gorgeous firefighters….

Drop-dead, movie-star-handsome Rafe looked even better in person than his photo—if that was even possible. Jillian’s heart lifted in an appreciative sigh.

The calendar included certain important facts about each firefighter, stats any woman with a pulse would want to know. According to the details Jillian recalled—and with a calendar hanging on the wall in her studio, she was quite familiar with them—Rafe was single. At least he had been when the calendar was printed. By the intimate look from his lady friend, his status had changed.

“I’m sorry about Pooh,” she apologized. “She’s supposed to stay in the yard. Instead the little scamp dug under the fence and lit out.”

When Pooh had made her escape, Jillian had been in her pottery studio, creating pieces for one of her retail customers and for the Arts Festival in April. If she hadn’t decided to stretch her back and wander to the window, she wouldn’t have noticed until the dog was long gone.

“My dog used to do the same thing.”

Wishing she’d dressed in something other than raggedy work clothes, Jillian wiped her wet palms on her threadbare, damp jeans before she shook his huge hand. His firm, warm grip engulfed her cold fingers, and his chocolate-brown eyes fixed intently on her.

Her knees wobbled. She glanced away. As attractive as Rafe was, she refused to go all weak and fluttery. He was already taken.

Even if he hadn’t been, the ramrod straight posture, military-short hair, meticulously pressed shirt and jeans, and polished black boots screamed order and control. This was the kind of man who made life miserable for everyone around him. At eighteen, she’d left home to get away from that. She would never go back.

Rafe’s girlfriend cleared her throat. “I’m Sonia Kaye, Rafe’s architect.” She started to extend her hand, but, after giving Jillian a quick once-over, offered her card and a perfunctory smile instead. “I should go, Rafe. I’ve seen enough for now, and I took plenty of photos. I’ll be in touch.”

“Let me walk you to your car.” He held up a finger, signaling Jillian to wait.

Pooh wanted to follow the couple, but Jillian caught hold of her collar. “You’re not going anywhere.” The dog put wet dog smell on a whole new level, and Jillian grimaced. “You need a bath.”

With JR and Chelsea out, who knew where—they certainly hadn’t said good-bye or left a note, but then, they never did—she would likely be the one doing the honors.

Rafe and his architect girlfriend moved in tandem up a gently sloping hill, toward the two expensive sedans parked on a dirt patch some distance away. One, a silver Mercedes, the other a gleaming navy convertible BMW.

Which belonged to him? The sleek BMW, Jillian guessed. It looked cleaner and somehow suited him.

Yep, the convertible was his. Rafe held the umbrella over Sonia’s head while she climbed into a silver Mercedes. After flashing a flirty smile, she drove away, her tires churning up mud.

Rafe tromped back to her. “Where do you and Pooh live?”

“Not far. On the other side of the field.”

“How do you know the name of my landlord?”

“I just bought the two-acre plot you’re standing on, and I know everything about this area. Your cottage isn’t more than a third of a mile from here, an easy walk, but this driving rain can make even a short distance seem like a long way. How about a lift?”

The offer surprised her. “We couldn’t possibly. We’re both wet and muddy, and Pooh stinks something terrible.” She held her nose.

Rafe didn’t argue with her. “You don’t even have an umbrella. I do. I also happen to have a spare leash in the trunk of my car. Let me grab it, and I’ll walk you and Pooh home.”

Jillian was tall, the top of her head almost level with Rafe’s nose. That put her at about five foot ten. Long-limbed and slender, she could pass for a runway model—at least from what Rafe imagined. In baggy, wet clothes and dirty sneakers, he couldn’t tell.

Her wet, shoulder-length blonde hair lay plastered to her head. Rafe remembered how cold her hand had felt in his. Any minute, her teeth would start to chatter.

“Here,” he said, setting the umbrella down to shrug out of his lined windbreaker. “Put this on.”

“You’re also freezing cold.” He helped her into it then picked up the umbrella and held it over them. “Don’t worry, it’s washable. Zip up.”

She did. The thing swam on her, which was kind of cute.

“How long have you lived on Cy’s property?” he asked.

“For almost a year. Last month, I signed a lease for another year.”

“We’ll be neighbors, then—once I get my house built.”

When not at the Guff’s Lake Fire Department, Rafe spent his time managing his rental properties. He also kept an eye out for fixer-uppers, which he enjoyed remodeling and selling. With the combined income he earned, he’d finally saved enough to build his dream home without emptying his bank account.

“Your own custom place? Lucky you. Sonia must be so excited.”

“Because I hired her to design the house?”

“That and because you’re a couple.”

He laughed. “We’re not together.”

“Getting romantically involved with my architect could be risky.”

“Because if it didn’t work out, you’d still need her help.”

That and because as much as he liked women, and he liked them a lot, he didn’t trust a single one enough to live with. Which wasn’t quite true—he trusted his paternal grandma and a handful of female teachers from grade school and high school. But he preferred living alone. “Yeah.”

Jillian nodded then angled her head. “You’re a firefighter, right?”

She blushed, adding much-needed color to her pale skin. “I have.”

She had a generous mouth and fine, delicate features. “There’s something on your chin,” he noted, nodding at the gray glob stuck on the underside. The same stuff stained the cuff of her oversize sweatshirt. “And on your sleeve.”

She touched the spot on her chin and rubbed at it, laughing self-consciously. “It’s clay. I’m a potter.”

“Yes. I sell to a couple of stores in the area an online. I’m also working on pieces for the Rogue Valley Arts Festival in Medford next month. Until recently, I also taught at the Artist Cooperative on the south side of town.”

“You don’t teach there anymore?”

“The school closed up shop last month. I’m getting ready to offer classes in my home studio.”

“I never figured that little house with room for studio.”

“Actually, I use the outbuilding behind the cottage. With heat, electricity, and a skylight, it’s perfect. I think it was originally designed as a workshop for household projects. I got permission from Cy to turn it into my pottery studio. My kiln is behind the building.”

Rafe wondered how she made ends meet selling pottery and teaching classes. Having spent the first ten years of his life with his self-named artist mom, whose sales from herbal concoctions and tie-dye T-shirts had often left them both hungry and moving in a hurry to escape eviction for non-payment of rent, he preferred a steady job with a regular paycheck, and money in the bank.

As they neared the cottage, Pooh woofed and strained at her leash.

“
Now
you want to get home,” Jillian quipped. Under her breath, she added, “You’ll change your tune when you realize you’re about to get a bath.”

Three Scenarios in Which Hana Sasaki Grows a Tail by Kelly Luce
Escorting Jessica by Pulkinen, Carrie
Swim to Me by Betsy Carter
The Starter Boyfriend by Tina Ferraro
Braking Points by Tammy Kaehler
I Dream of Zombies by Johnstone, Vickie
The Perfect Gift by Raven McAllan
Fat Man and Little Boy by Mike Meginnis
Dead on Arrival by Mike Lawson
Lily's Dream (Unexpected Lover Series) by Collins, Lea
Our partner