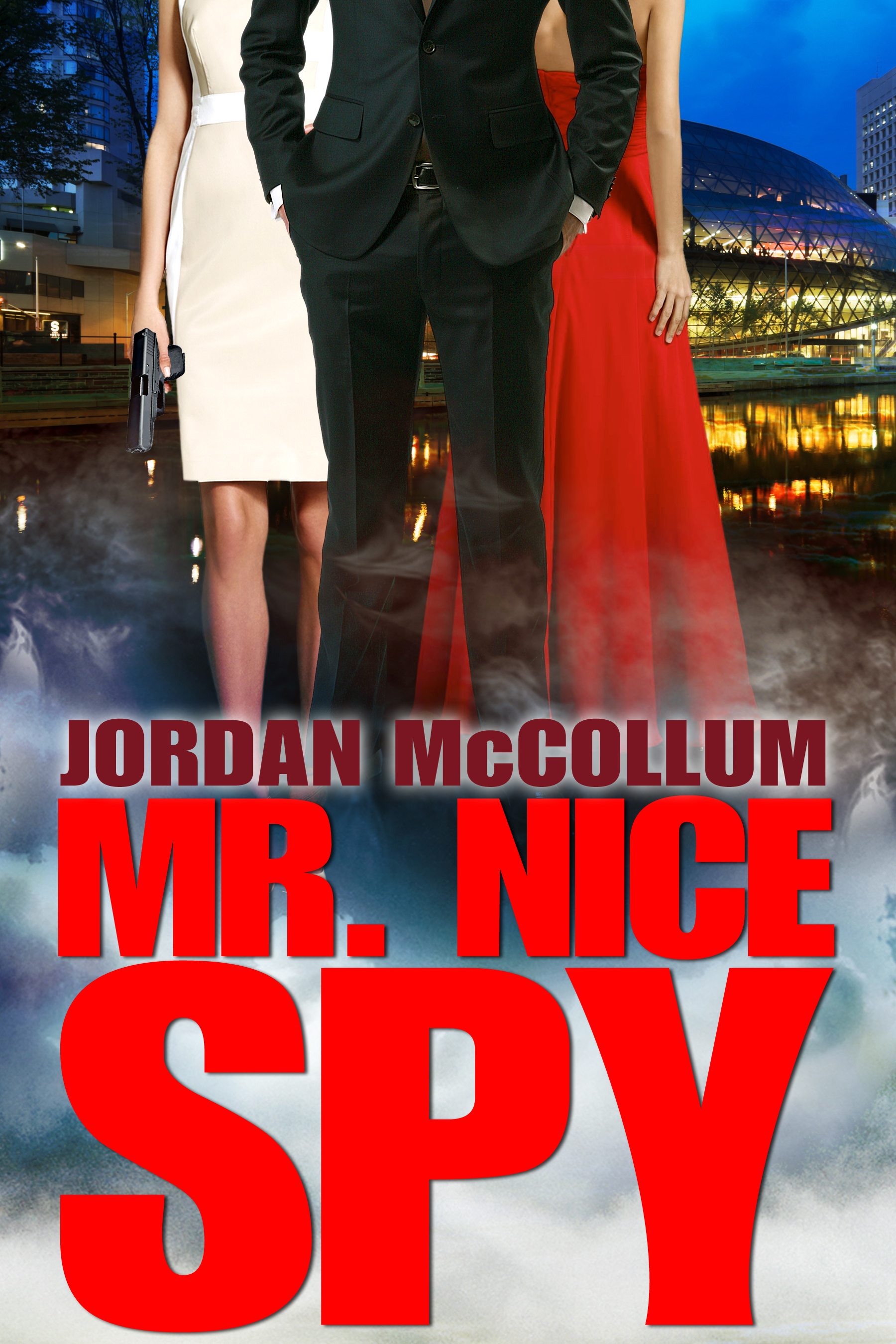 OTHER BOOKS BY JORDAN MCCOLLUM

Surveillance sucks. And it can take up way too much of a spy’s job. I readjust the stand for my government-issue parabolic mic, pointed out the back windows of my nondescript van. I shouldn’t miss a whisper from the ambassador’s office. My aim has gotten good over the years — and even better in the last four hours.

“How’s it look up there?” I murmur into my other mic, comms to my partner for this op.

Talia, my spy in the sky, answers back. “Still. Boring.” From her perch in the building next to my van, Talia’s got an overhead view. Of nothing, apparently.

“Same here.” I sip my cold, burned coffee and refocus on that one lit window in the United Arab Emirates Embassy. It’s long past dark here in Ottawa, and I doubt they keep on Dubai local time inside, so work might be wrapping up in the ambassador’s office.

Yes, the United States is close with Canada and the United Arab Emirates — but sometimes you have to keep your
friends
closer. This is one of those times. CSIS, Canada’s spy agency, has informally asked us, their favorite CIA office, to help with a potential airport landing rights problem.

If you want to get technical, they asked
me
to help, and I roped in Talia. So unofficially, we’re here, though we could start a lot of trouble if we get caught eavesdropping on an ally.

What our Congress doesn’t know — well, let’s just hope they never find out.

From what I can tell, however, there’s not a whole lot
to
find out. The ambassador is busy reading or filing or making paper airplanes. No phone calls. No meetings. No nothing, just periodic paper shuffling. But as long as his light’s on tonight, I’ll be here listening.

My phone dings. Text. I think I’m safe to look away from the window for ten seconds.

It’s from Shanna, my fiancée.
Be home anytime soon?

I glance at the time. She’s flying to Chicago to visit her mom tonight, and she probably expects me to drive her to the airport. To be honest, though, with how things have been lately, I’m surprised she’s asking.

“
Habiibii?
” A woman’s voice, not Talia’s, through my headset makes me jump — and jump into action.

“Got company,” I inform Talia. “Wife, I think.” I tuck my phone away, steady my mic and make sure the laptop is recording. I’m the best we’ve got in Canada, but my rudimentary Arabic will need help.

In the next two minutes, I think I catch a “Toronto.” The reference could be anything, given our location, but it’s enough to tickle my hackles in a way I really don’t like.

Then I pick up something else I don’t want to hear: “American.”

Could be anybody. It’s not
that
late. Visiting diplomats. Local officials. Cleaning staff. I almost believe myself. One way to check. “What are they wearing?”

“Black.” She’s quiet for a second, and the ambassador’s wife cuts in. Good thing we’re recording this. Talia interrupts again. “You say it
keffiyeh
, right?”

The headdress for Arabic — and especially Emirati — men. Still, anybody coming from the embassy could be Emirati. Even if they usually wear white instead of black. “Sure they’re men?”

“Unless these are really burly women, yeah. I can recognize a burqa.”

Most Emirati women don’t go for the full burqa, but I don’t correct her. I crane my neck to scan through the back windows. I’m situated half a block from the embassy gates in a beat-up plumbing van. I should be safe.

Thing is, I feel anything but safe. “What are they doing?”

And I’ve got a whole lot of stuff I don’t want them seeing. The ambassador’s light is still on, but I don’t have much of a choice. I toss out one last-ditch hope. “Security?”

“Dog walkers. Come on. Of course.”

“They don’t have the authority to do this, do they?”

“I dunno. Should I go ask to see their creds?” With that tone, Talia doesn’t have to scoff.

“They’re already halfway to you.”

I peer up at the building where she’s hiding, like I’ll be able to see her through the metal and concrete. “One more minute.”

“E.” Talia’s single-letter nickname for me is a warning. She can’t call me Elliott over comms, but even that’s more than she’d usually say.

I tamp down the tension tightening my gut. “I got this.”

I check the windows again, and now I can see the flashlights up the block, around a minivan. Then a sedan. Fast. Too fast. My stomach frosts over. I don’t have one more minute.

I click to stop the recording on the laptop and lay the mic into its case as quickly and carefully as I can.

“Yes, Mother.” I grab the tool belt off the hook by the van’s back doors, thread it through my belt loops and take a deep breath.

“One car. Get going or I’m dropping something on them.”

“Subtle.” Now or never, right? I stick the back door open. Though I’m careful to keep my feet from hitting the ground too loudly, I make sure the metal toolbox clatters against the small square of exposed floor.

“They heard you.” Talia’s voice reminds me to finish my cover. I switch on the display of the iPod that acts as a disguise for my comms, pop the other earbud in and slam the van door shut.

I barely reach the sidewalk before your local neighborhood Emirati security force is on me. Talia stays quiet, and I don’t check the sky for falling objects. I just size up these two not-so-secret agents and nod, like I’m a plumber finishing a late-night call.

They do those, right?

“Where are you coming from, sir?” Dude Number One’s accent is medium-to-heavy Arabic.

I jerk my head at the other side of the street and pull out my best Ottawan twang. “You wouldn’t believe what some people flush.”

Dude Two and Dude One exchange a glance, then look at the side of my van. Time to go.

“Have a good night.”

“Be careful where you park,” Dude Number Two intones like it’s his favorite verse of the Quran. There are a lot of Islamic laws, but I’m pretty sure none of them apply to parking.

I salute and head around the front of the van for the driver’s door. I could’ve gone straight there, avoiding these guys, but it has to seem like I’m
not
avoiding them. Less suspicious.

I yank my door open. They don’t move on.

“I’m sorry,” I throw in for the extra-Canadian effect. “Is there a problem?”

“You know there are no trucks on this street, yes?”

The seconds add up on the awkward clock. Finally, Dude Two speaks. “We were wondering if you wear your tool belt while driving.”

My breath stops, and I hear Talia’s soft grunt, like their little catch is a gut hit.

I can recover. CIA? Try CYA. I unbuckle the belt and toss it onto the seat. “Nope.”

I hop in the van, but I don’t dare to address Talia until I’m clear of the Emiratis’ sweep. “You getting out?”

I check the rearview. The flashlight beams scan another car, a few spaces down from the spot I left. A word problem plays out in my mind: if one American spy leaves a Canadian apartment traveling at three miles an hour, and two security guards she’s not supposed to be spying on continue toward her at four miles an hour . . .

The exact answer eludes me, but it doesn’t add up to something good.

I swallow hard, the burnt coffee aftertaste like acid. No more time to calculate. I hit the gas and flip the first right. These blocks are long, but I might be able to make it in time to help.

“Locking up. Am I black?” Talia asks, using Agency code for clear.

She doesn’t say anything, but she doesn’t have to. She’s flying blind into a possible ambush after spending the night spotting for me. Not exactly fair.

I hang the next right and turn back onto the one-way to the embassy. This is definitely taking a chance — they’ve seen my van. Studied it in detail. Probably memorized the stupid monkey wrench logo. If I drive by again, they’ll think something is up. And if I stop to pick up a pedestrian? They’ll know it.

But when your partner needs you, you do everything it takes to be there for them, no matter the risk.

“Elliott.” Talia’s whisper raises all my red flags, and not just because she’s using my name. “They’re heading back to the embassy.”

Toward her. “Stay in front of them.”

“Please.” I’m not enough of a plumber to stop the pleading that leaks into my voice.

Alice-Miranda to the Rescue by Jacqueline Harvey
Justice Served: A Barkley and Parker Thriller by Flowers, R. Barri
The Contender by Robert Lipsyte
Tthe Sleepover Club on the Beach by Angie Bates
Tripoli's Target (Justin Hall # 2) by Ethan Jones
Nothing's Sweeter than Candy by Lotchie Burton
Any Way You Want Me by Yuwanda Black
Los gritos del pasado by Camilla Läckberg
Trick of the Mind by Cassandra Chan
Written on Her Heart by Julie Anne Lindsey
Our partner